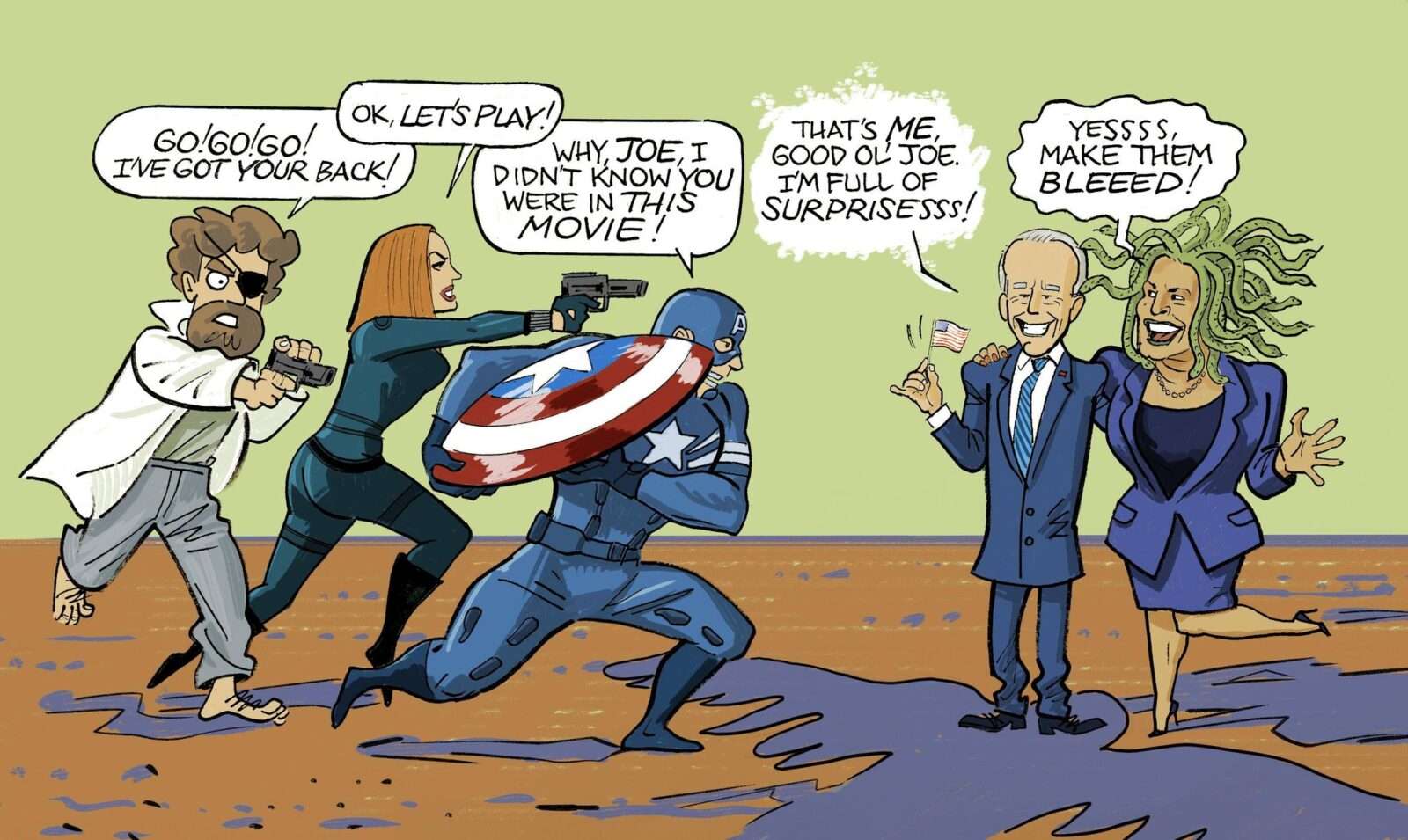 Like all Marvel Cinematic Universe (MCU) films released to date, this film has excellent production values throughout. In some respects, notably the way action sequences are choreographed, performed, filmed, and edited, this MCU film is a cut above the rest. Few, even those in the cosmic Infinity Stone storyline, are as immediate, visceral, fast-paced, and exciting as the sequences in Winter Soldier.

That said, I’m not writing this review to talk about its technical merits. It is an excellent movie for the genre. If you like action films and don’t mind a few spangly costumes, you’ll like this movie. My goal is to find out exactly when the MCU makes the switch from neutral or conservative-themed storylines to full-on liberal happy rainbow unicorn land. 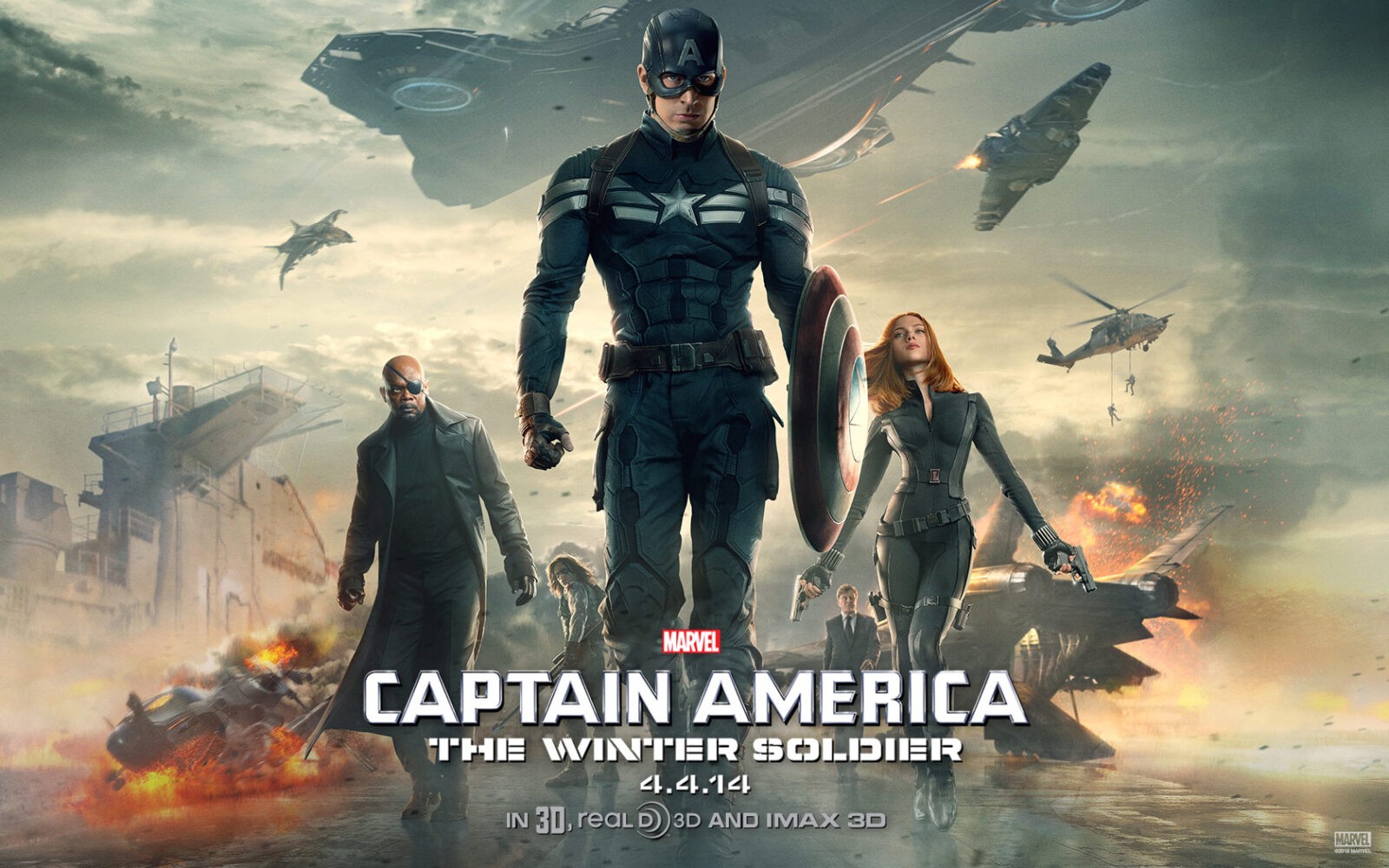 So far, I have reviewed all of the Phase One films, Iron Man 3, and Thor: Ragnarok (the first in the series). Of that group, all are either mostly neutral or somewhat conservative. After writing the Iron Man 3 review, I took a four month break to write articles for Law Enforcement Today, a publication designed for readers who work in Law Enforcement. You can see my articles by clicking on this link.

Writing for LET made me more aware of the difficulties faced by law enforcement in our country. The articles gave me a chance to support a group of hard-working, sincere, decent people who have had their collective reputations smeared by a hostile press. That experience left me even less sympathetic to those in the media who are engaged in what amounts to terraforming our society to make it more congenial to their Progressive politics. By malforming our view of the world with carefully crafted stories, the media and entertainment can and do cause real damage to real people.

This is why I find the MCU so interesting. We have all seen TV shows that start out conservative, like Little House on the Prairie, Law & Order, the Waltons, and Home Improvement. After a successful season or three, they gradually become more liberal. Before long, they become wholesale Progressive propaganda dumps. At that point, they are no longer watchable.

Most feature films don’t have this problem. This is partly because most filmmakers make such poorly-received sequels that very few extend beyond two films. More often, successful conservative film like The Passion are often followed by very bad liberal takes on the material, like the film Noah. After those movies fail, Hollywood gives up on the idea.

The MCU is different because they are thematically related but aren’t sequels. They are more like TV shows than films in that respect because there is continuity  without repetition. The movies can succeed on their own and do. Possibly for this reason, the MCU has the longevity to shift toward more liberal storylines, particularly in their most recent offerings.

The Winter Soldier represents what may be the most conservative story of the entire series. It also contains a prescient warning for the future. 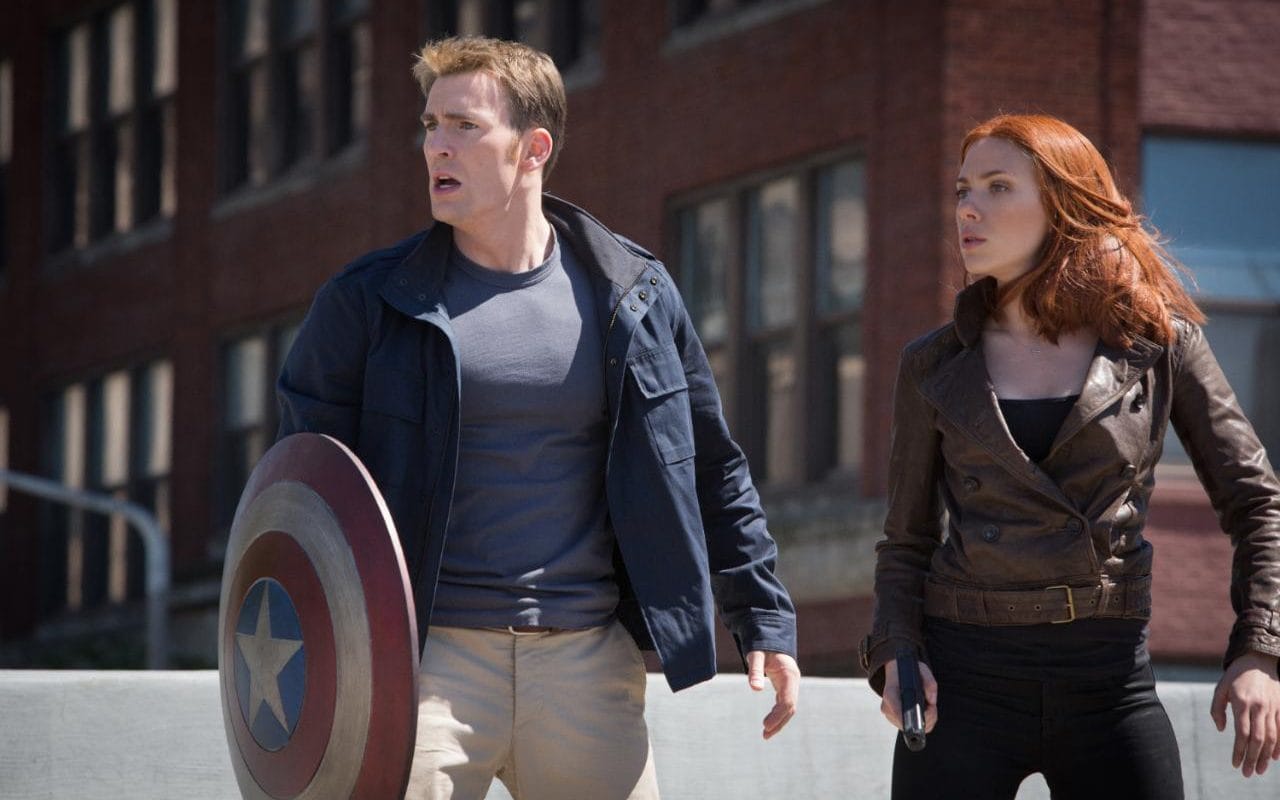 The Winter Soldier is about trust. Who can be trusted, who shouldn’t be trusted, and why disloyal traitors must be utterly defeated before they multiply and destroy civilization.

The evil Hydra engineer Arnim Zola died in 1972 but his mind was saved in computer form by SHIELD. He used his access to the SHIELD network to recreate Hydra within SHIELD. The exact parallel to this in the real world is Communist infiltration in the US State Department, starting in the 1930’s.

Like the paramilitary group Antifa, the evil Hydra-influenced SHIELD “doesn’t negotiate”. They take what they want regardless of laws, orders, or normal social limitations.

Captain America sees strange signs in the people around him. He has been trained to trust the people he works with. In World War II, he could. Even the bad guys were clearly identifiable as bad guys back then. Now, as he walks among the agents of SHIELD, he isn’t so sure. 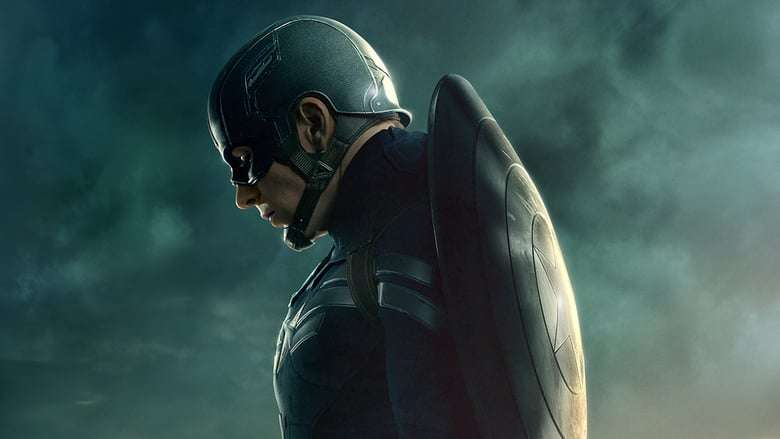 Captain America defeats some terrorists who have taken SHIELD agents hostage on a large cargo ship. They are, laughably, French. At the same time, the Black Widow sneaks off to copy data from the ship’s computer. Captain America is annoyed. She could have compromised the mission.

She says “that was your mission.”

Captain America is angry. He doesn’t like the idea of being sent into battle without knowing that some of his team cannot be relied upon because they have been given independent tasks. It makes it difficult for him to understand the battle map and plan accordingly. He confronts Nick Fury. “Soldiers trust each other. That’s what makes it an army.”

From this point on, it becomes increasingly clear that he cannot trust SHIELD, which has now been his home for decades. There are many compromised men and women in the organization. Too many to root them all out. It is here that several characters, like Peggy Carter and the evil Alexander Pierce, tell him that, “Sometimes you have to start over.” In other words, dismantle everything. Eliminate SHIELD and Hydra is eliminated also.

This is the treatment plan Captain America chooses to follow.

As I watched Captain America fight Hydra, I couldn’t help but think of the riots we’ve all experienced this past year. Like Hydra, those paramilitary groups came out of nowhere, bore all the signs of some kind of clandestine organization, and they were supported by the press and social media. Like Hydra, information warfare techniques were used to maintain their activities while disguising their true objectives. 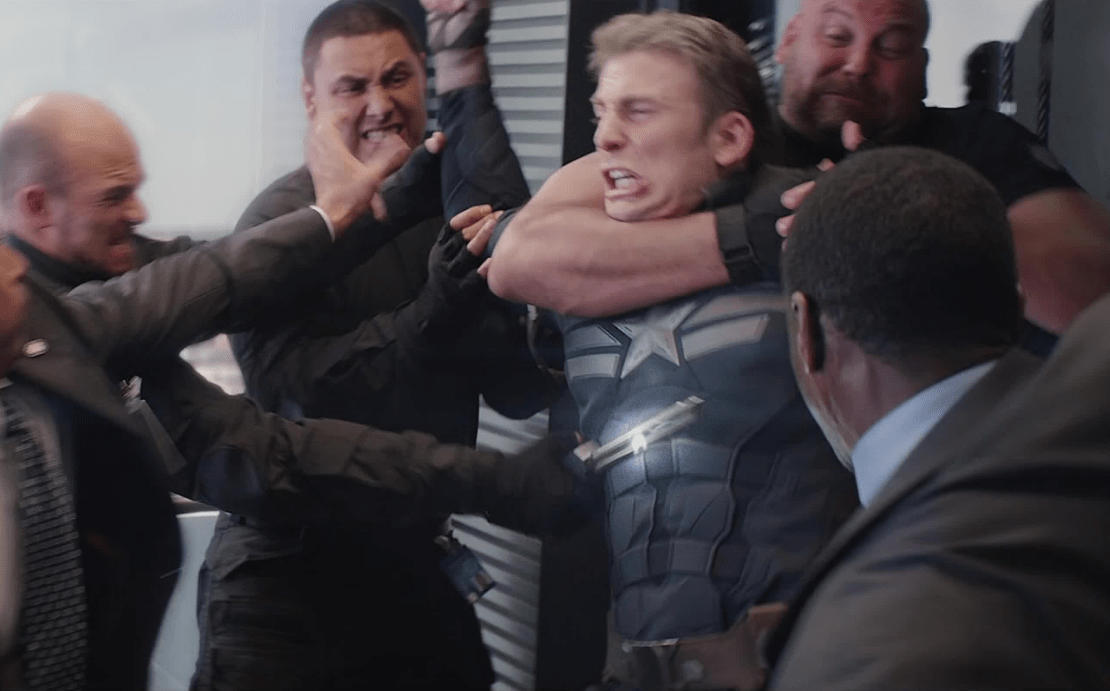 There is a scene in the Winter Soldier where a group of SHIELD agents are forced to decide whether they are SHIELD or Hydra. They all stand, guns drawn, not sure who to aim at. That moment reminds me of the mood in this country right now.

President Donald Trump won the election. Or did he? Depending on how one answers that question, one knows the name of the team one is playing for, Democrat or Republican, but not which team is Hydra.

By challenging the election, our president has recreated that scene from the film. We are all now compelled to decide which side we are on. Some want to wash the whole thing away, accept a Biden victory, and deal with the issue if it comes up again in 2024. It may seem like less trouble but if Trump is right, the situation isn’t much less dangerous than the one faced by Captain America in the Winter Soldier. If he’s right, this election has to be challenged, investigated, and the truth discovered before we can move on.

It is remarkable to me that 2014 produced a film about information warfare that so eerily mirrors contemporary events in 2020. We don’t have giant heli-carriers dropping from the sky but the issues we have as a nation come from the fact that we have all become segregated from the truth.

We rely on the press or social media to provide information but they are only middlemen. Just like an absentee ballot, which becomes completely anonymous once it is separated from its signed outer envelope, we don’t always know where our information is coming from. In the Winter Soldier, this leads to serious problems that lead to armed domestic conflict.

Is that what we have to look forward to? I hope not. I’d like this story to remain a part of the MCU. A fantasy. And yet, as I watch witness after witness testify to election fraud, and see dozens of statistical analyses explained, it becomes increasingly clear that the Winter Soldier isn’t that far off.

This is how the Hydra computer described itself:

“A beautiful parasite within SHIELD. HYDRA created a world so chaotic that humanity would sacrifice its freedom for security.”

In the film, Alexander Pierce said, “Society is at a tipping point. All it needs is a push. I have to do my part. You have to do yours. Otherwise, we can’t give humanity the freedom it deserves.”

These are the bad guys talking. They have a rationale for their actions. From their point of view, they are the good guys. All they want is order. 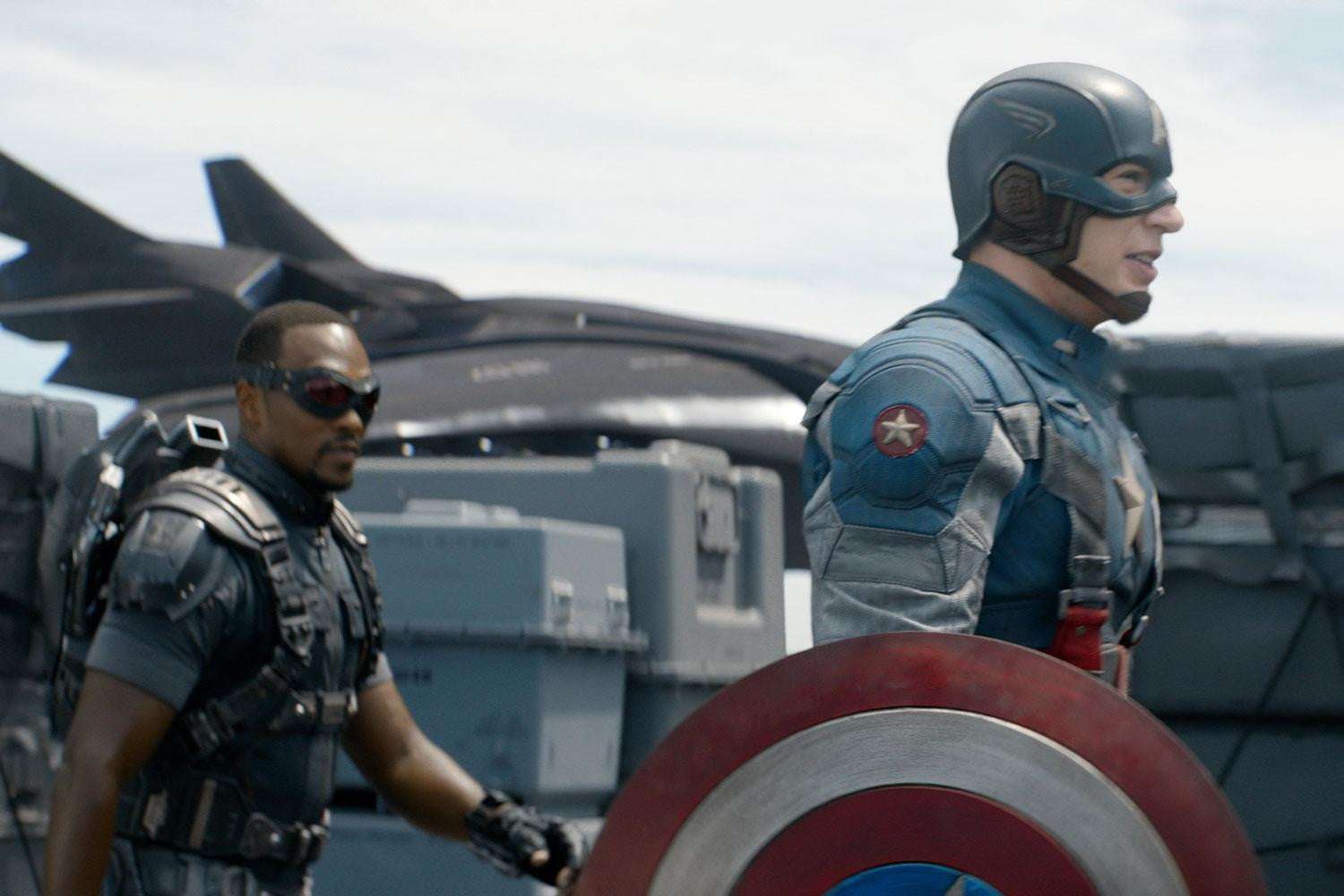 At one point in the film, Captain America’s friend, the Falcon, asks him how to tell the difference between the good guys and the bad guys.

“The bad guys are shooting at you.”

In the real world, I think the difference can be spotting by checking to see which side is telling the truth.

An irony in this film is that Captain America comes across as liberal or Progressive in contrast to a conservative Nick Fury. Captain America’s desire to trust others interferes with his ability to detect the bad guys. He is co-opted by his own decency into aiding Hydra on many missions. Fury, who is more jaded, spots the problems more quickly and moves with requisite force to eliminate them. Captain America eventually sees the light but he came very close to being too late.

Getting back to the technical merits of the film, I have to mention the end credit sequence. It is inspired by the comic book art of Jim Steranko. The sequence is a beautiful homage and among my favorite end sequences of all time.