The comic book industry have been waiting to see, if despite all that came before it, Tom King could stick the landing with Heroes in Crisis #9. Absolutely not. If anything issue 9 compounds all the issues Tom King has with the series. The concept behind Heroes in Crisis is interesting. King’s issues with pacing, plot holes and mischaracterizations became insurmountable obstacles all the way back at issue five. King continued to dig the hole deeper until the conclusion of the series. In the end Heroes in Crisis devolved into a hopeless story full of contrivance and poor execution. 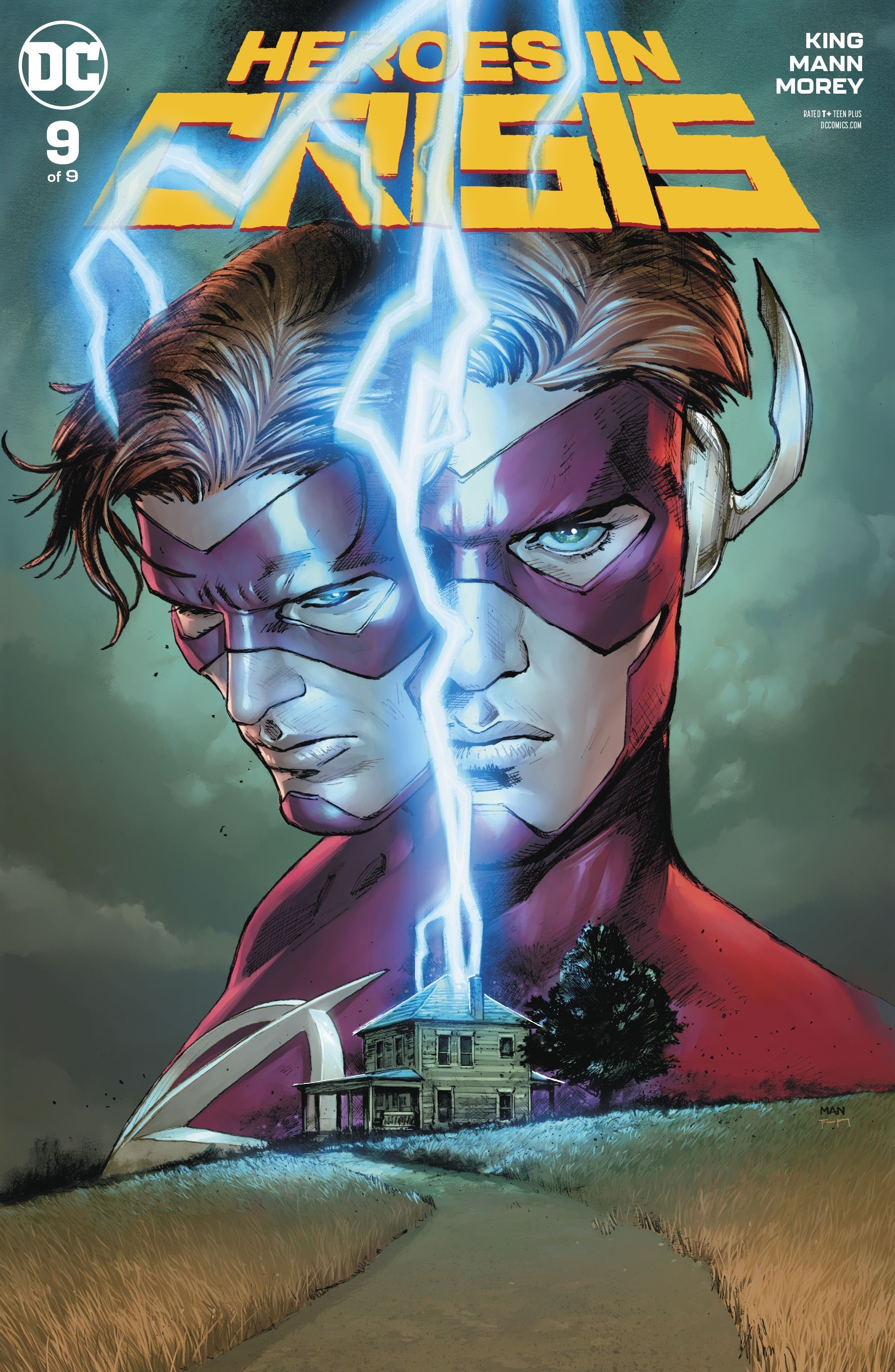 Clay Mann returns to illustrate issue nine. He’s been fantastic every issue he’s drawn. Once again, his phenomenal artwork is wasted by a pretentious, poorly executed script. Issue nine contains four of the now infamous 9-panel MTV Real World style confessionals. What a waste of Mann’s time and talents. Clay Mann also does great work leaving space for King’s bloated dialogue this week, no small feat in and of itself. 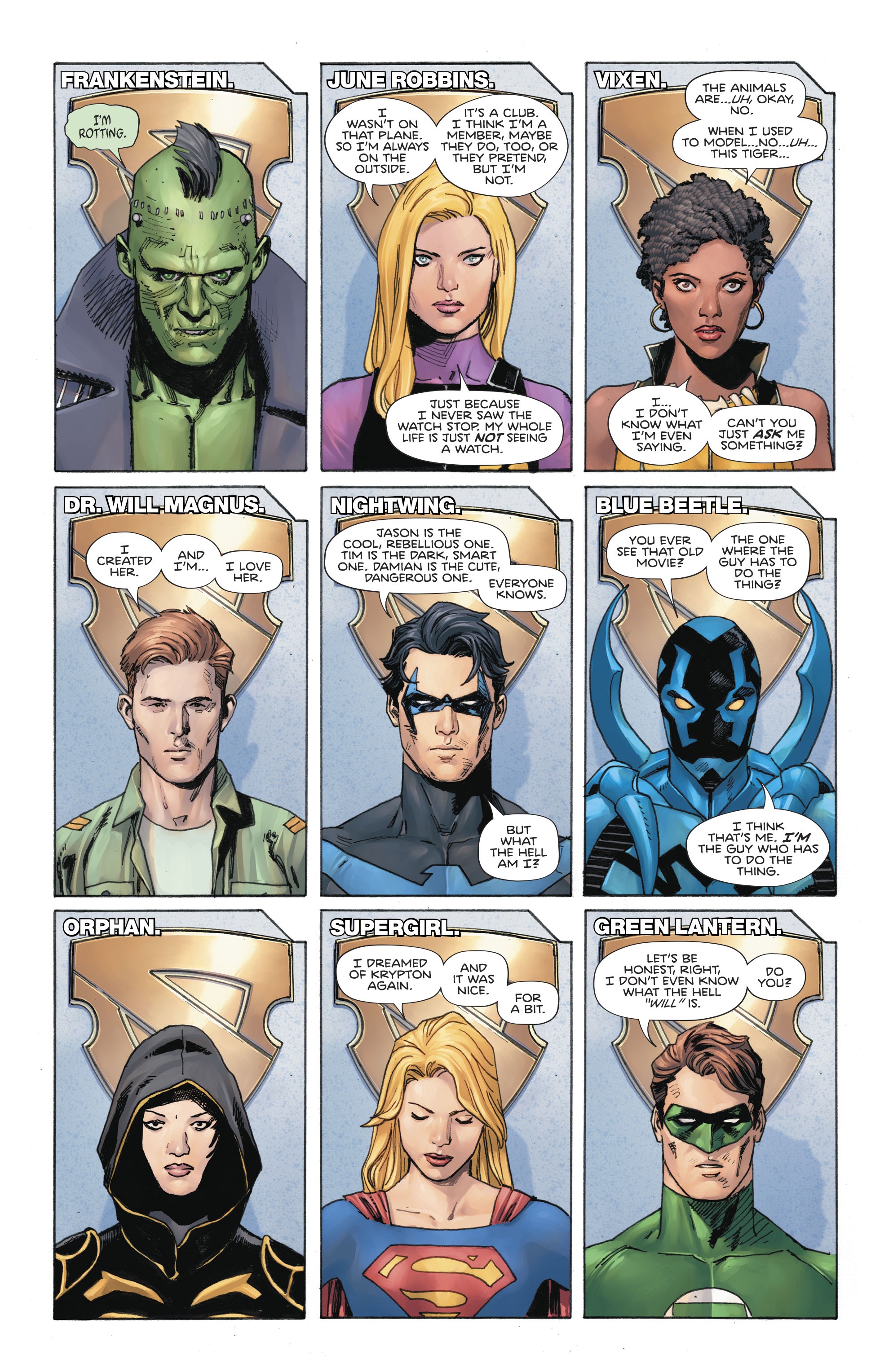 Issue nine begins with a scene of Wally five days in the future preparing to break his future self’s neck. This is very disturbing imagery to say the least. At this point Wally is firmly established as a mass murderer, who framed innocent people for his crimes. Killing himself like this now fits the character now. Just as the deed is about to be done the team of Batgirl, Harley Quinn, Booster Gold and Blue Beetle crash land, seemingly right on top of the two Wally’s. 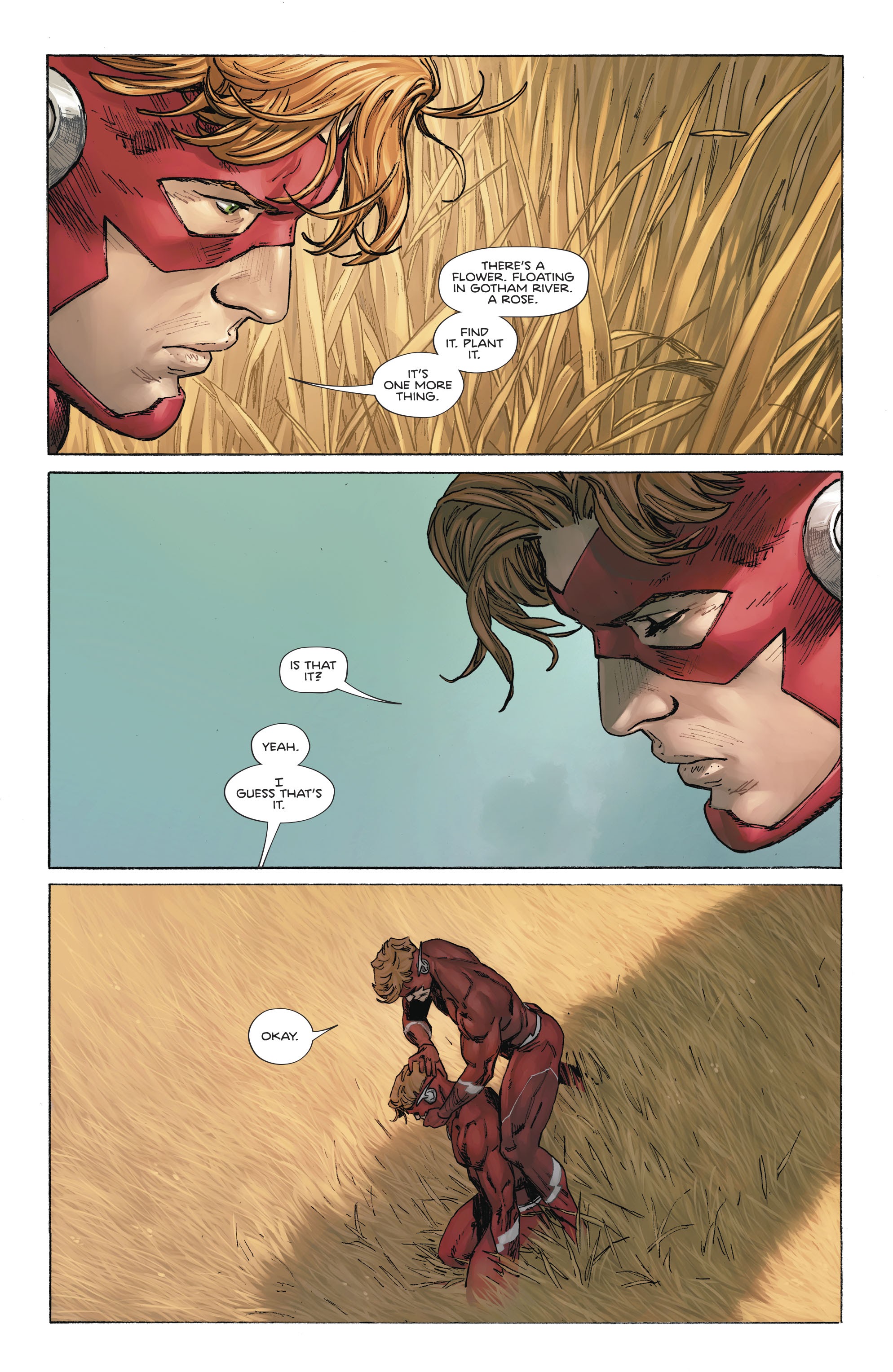 King continues to mischaracterize multiple actors in Heroes in Crisis including Batgirl. Babs is now calling Harley Quinn, a serial killer in her own right, “hon.” It’s completely out of place and forced. Nobody is going to accept Batgirl and Harley Quinn as anything except mortal enemies forever. He continues writing Harley Quinn as a mentally stunted 10 year old who speaks in sentence fragments and lullabies, awful characterization. What does it say about Poison Ivy that she would be with someone who speaks in prattle? Just terrible!

The message in Heroes in Crisis #9 is good but poorly set-up and executed.  Wally breaks down because he knows he still needs to kill his older self. His older self decides now is the time to speak to himself. Wally knows he messed up because he’s hurting. Wally wants him to know he’s not alone. 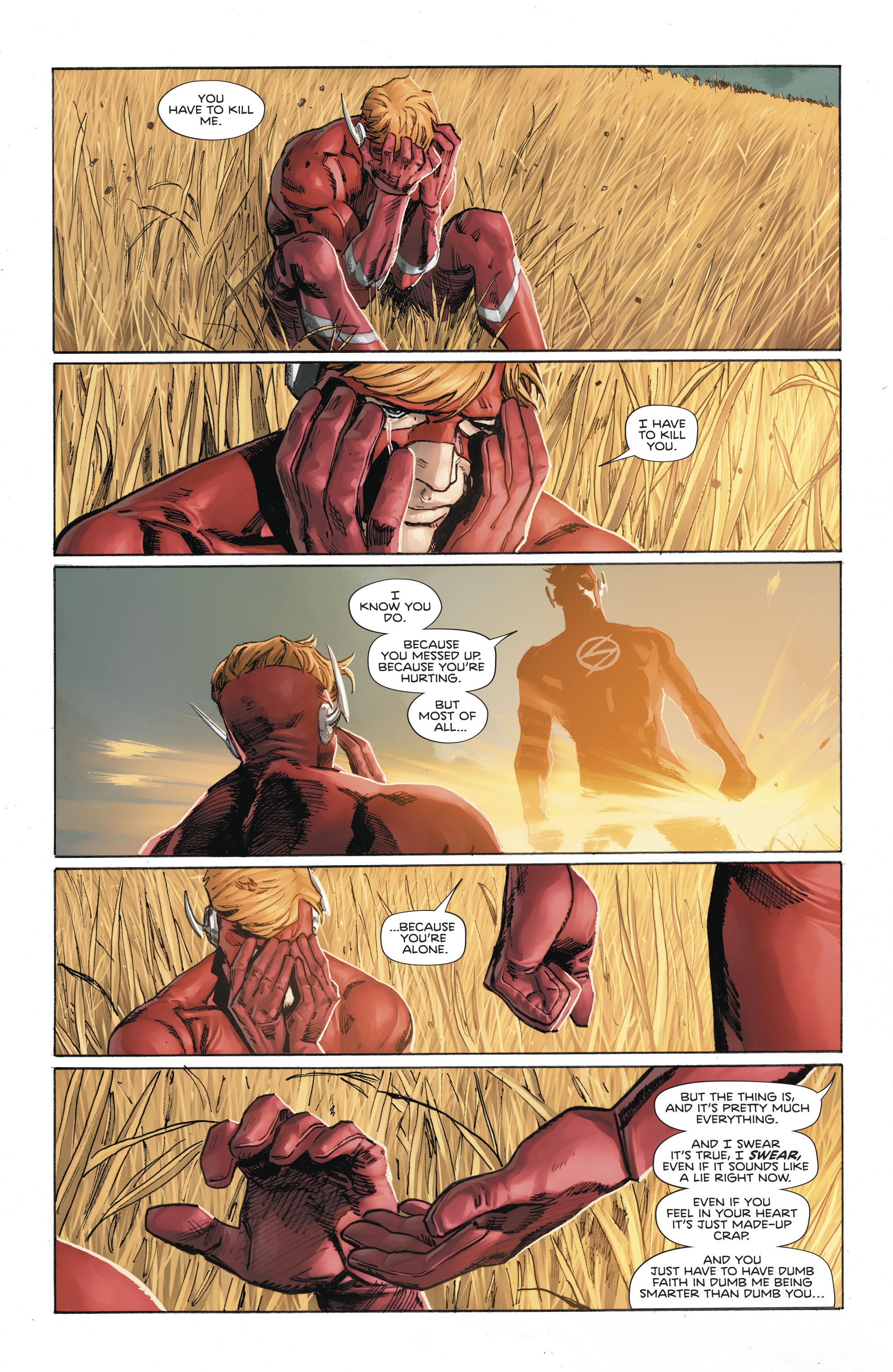 There are real issues with this scene. Heroes in Crisis is supposed to explore PTSD and other mental health issues. Why isn’t Wally’s friend and mentor Barry Allen talking him through this crisis? If someone is feeling overwhelmed with suicidal thoughts they shouldn’t try to work it out themselves. They need to seek out a friend, family member or medical professional. This sends a terrible message concerning the very real topic of suicide being covered in Heroes in Crisis.

King summons his inner Bendis the last half of the book and gets very, very wordy. Mann makes even the most mundane, overly wordy page look like a million bucks. Wally explains why he can’t go back in time to fix his mistake. He would cause another Flashpoint, like the one that cost him his family. Wally finally explains he came to kill himself because maybe he could help people. This would be so much more effective if Barry was the one helping Wally heal. 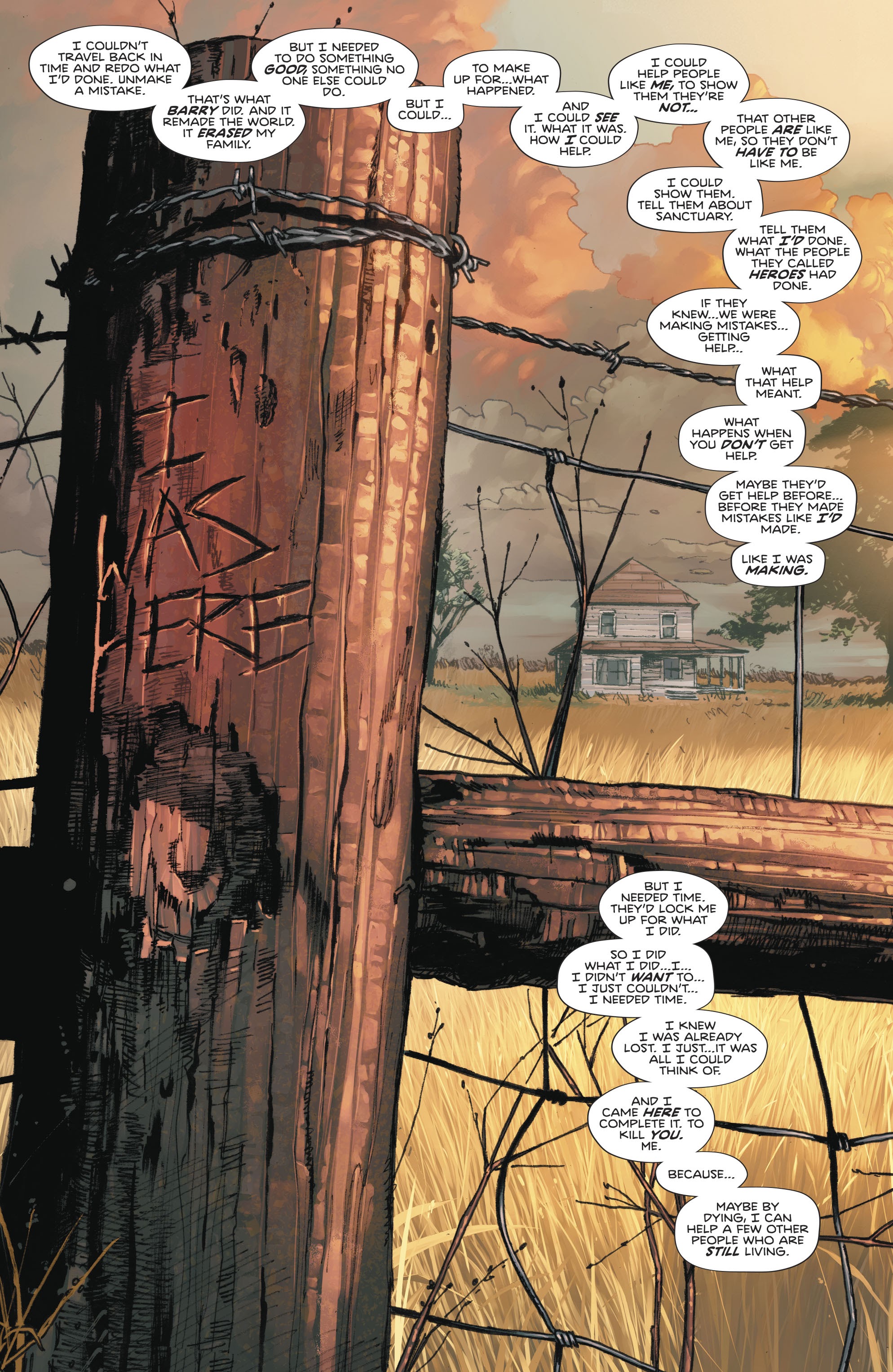 Wally tells himself Superman came out and told people the truth, referencing Supe’s speech 4 months ago. What the hell happened to Superman, Batman and Wonder Woman anyway? They saw there was a huge murder scene and seemingly went back to business as usual. Sanctuary was their terrible idea. Those murders are nearly as much their fault as Wally’s. And they never came back to the story.

If Wally didn’t kill his future self and plant the body, how did his dead body get there in the first place? Booster announces they can’t travel to the past to fix a problem but they can travel to the future. Of course, to get back from the future they have to travel back to the past but that’s beside the point. He travels to the 25th century and speed-clones Flash. King wasted four pages on confessionals and a third of an issue on throw-away character Gnark. Now when it’s time to explain his story there isn’t room. He needs to create a time McGuffin and explains it in a few lines of dialogue. This is a real issue with time-travel in comics. It lets writers take the laziest, most unimaginative ways to explain their own plot contrivances. 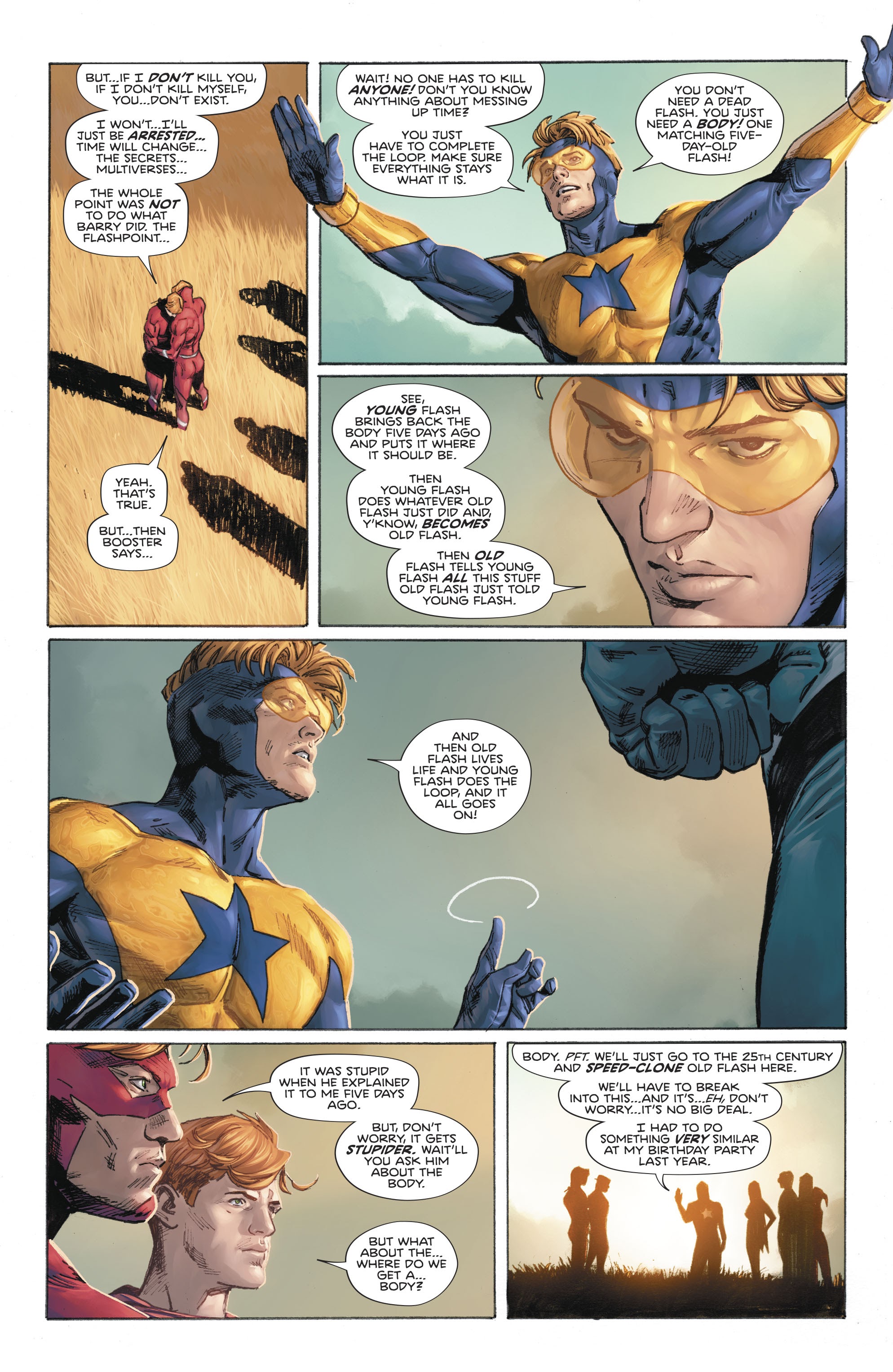 In the end Wally is still a murdered who framed innocent people for his crimes. The Justice League reappear to take Wally to prison for his crimes. Heroes in Crisis was supposed to be a deeper look into PTSD. It ended up an unfair indictment of people suffering mental health issues. Wally went to Sanctuary seeking help. His best friend and mentor Barry Allen didn’t help him. The staff at Sanctuary didn’t help him. Even Superman himself was too busy to see Wally was in pain and getting worse. Due to their inaction Wally West is now a murderer and going to prison. 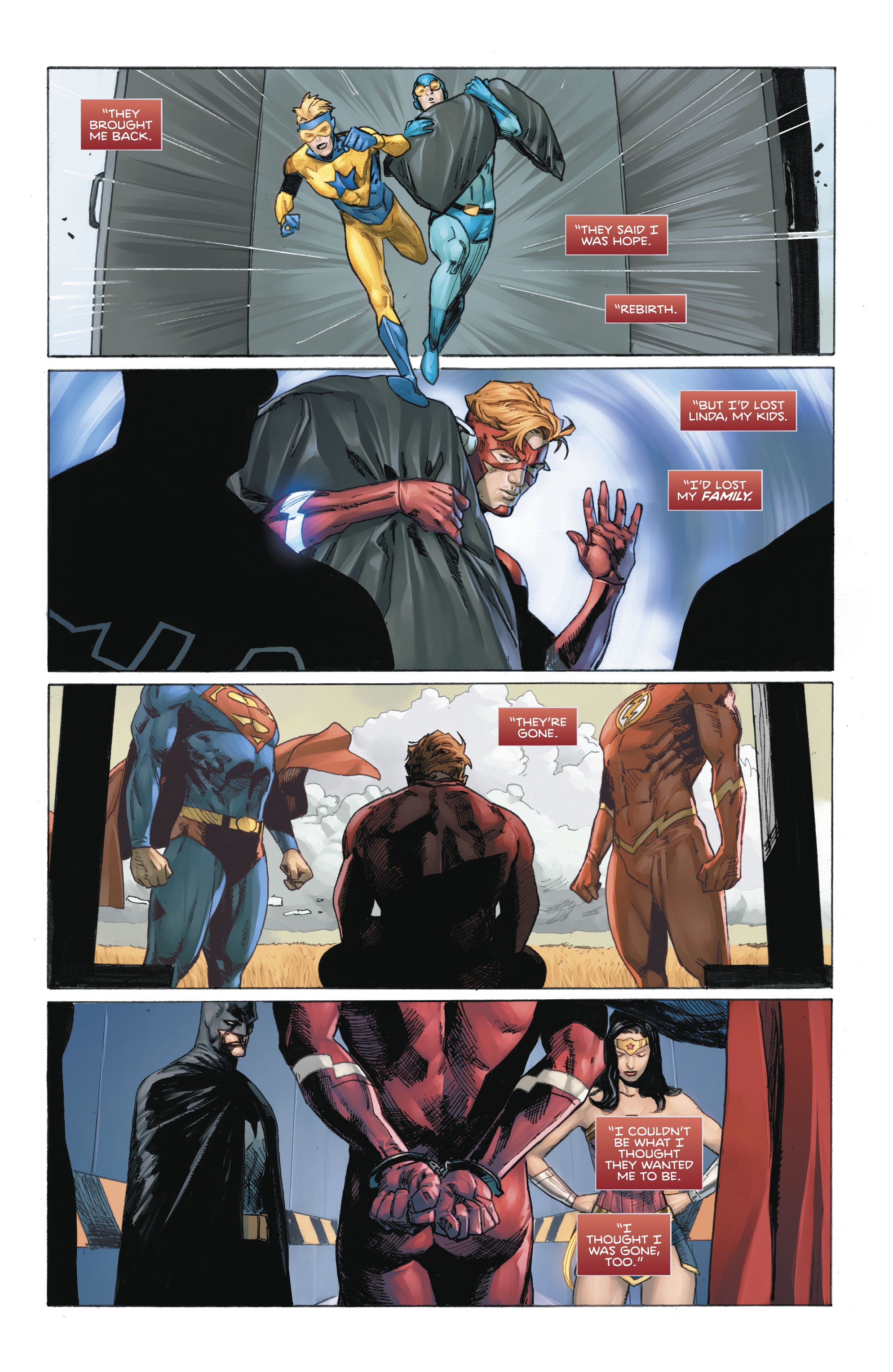 This story was billed as an exploration of mental health related illnesses. It rarely covered the topic and never well. The message Heroes in Crisis #9 tries to portray is a good one. If you are hurting you are not alone. There are better days ahead. It is delivered terribly. This is an awful end to an awful series. Wally West, the definitive Flash for a generation of DC fans is no longer a hero. In his moment of need nobody took the time to tell him he wasn’t alone and helped him. Until it was far too late. The deed was done and he was a murderer who frames innocent people for his crimes and plans to kill himself.

I can’t think of a more cynical take on mental illness. I can’t think of a worse example for people in need of help to witness. Tom King is in a terrible place as a writer. Heroes in Crisis and the complete destruction of Wally West is a stain on his rapidly deteriorating reputation among comic book readers. DC Comics was once the universe of hope and heroic ideals to strive for. DC Comics is now the universe of hopelessness and ugliness. I couldn’t be more disappointed in this entire series or the current direction of DC Comics.

For a more in-depth look at Heroes in Crisis #9 please see my full review video below.

Heroes in Crisis #9 - Tom King Misses the Mark by Miles