“It is more than entertainment,” the stage magician Vinovich declares in Lord of Illusions. “We are bringing miracles back into their miserable little lives.”

“You never understood why we did this. The audience KNOWS the truth. The world is simple. It’s miserable. Solid… solid all the way through. But if you could fool them, even for a second… then you can make them wonder. “

In 1995’s Lord of Illusions, Clive Barker explored the dichotomy between prestidigitation and real magic; between illusionists and wizards. Christopher Nolan presents an even deeper meditation on the personal consequences of blurring that line in his 2006 psychological thriller The Prestige.

Long regarded as the black sheep of Nolan’s catalog, The Prestige depicts an atypically gray moral universe instead of the clearer delineations between right and wrong most of his movies make. In that regard, it’s inferior to Barker’s tawdry yet objective mystery play about the moral hazards of dealing with demons.

That’s not to say The Prestige descends into relativism. As far as magic is concerned, Nolan’s cautionary tale presents clear right and wrong answers. What it doesn’t do is take sides. Unlike knight in tarnished armor Harry D’Amour, Robert Angier is a scoundrel driven by envy and vengeance. He is only a protagonist by virtue of his all-consuming drive to achieve his goal, and that obsession compels him to cross a number of irrevocable lines. 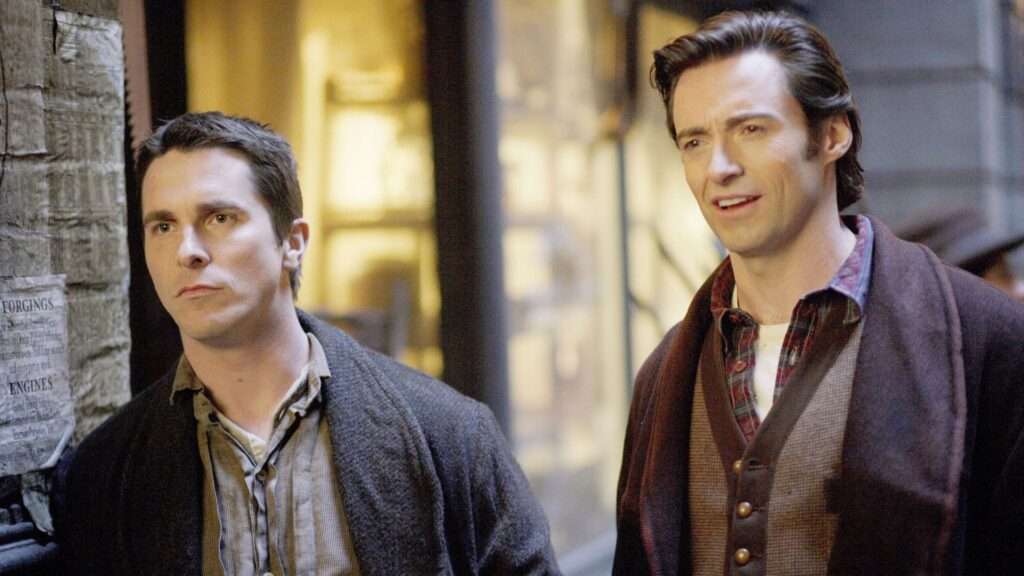 For whatever reason, Hollywood seems incapable of making an easily intelligible magician movie. Whereas Lord of Illusions suffered from most of its expository dialogue ending up on the cutting room floor, The Prestige labors under a sometimes literal flashback-a-minute story structure.

Potentially significant observation: The Prestige shares an end of Act I pinch with Lord of Illusions in the form of an illusionist’s death in a dubious trick gone wrong.

Now bitter rivals, Angier and Borden strive against each other to perfect the ultimate magic trick. Despite his superior showmanship, Angier finds himself outmatched by Borden’s total commitment to the craft. Spite moves Angier to instigate a ruthless war of tit-for-tat that leaves both men physically and spiritually scarred. 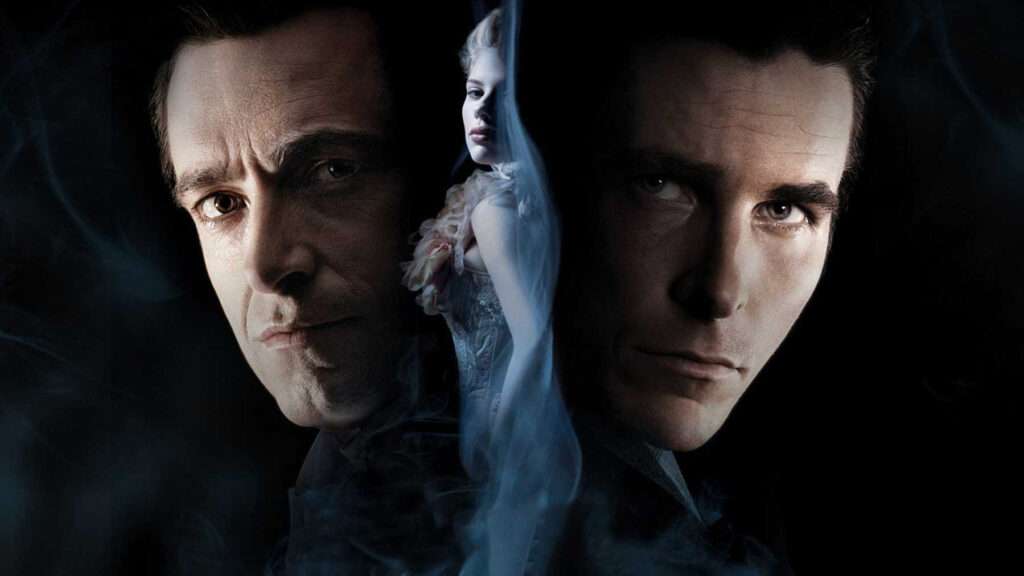 In desperation, Borden unveils the trick he’s been working on his entire professional life. His “Transported Man” causes a sensation that catapults him to the top of his profession. Mad with envy over his rival becoming the toast of London, Angier stoops to copying Borden’s trick.

Angier’s more commanding stage presence initially gives him an edge over his enemy, but his vanity precipitates unforced errors which deliver Angier’s secrets into Borden’s hands. His act in shambles and his career hanging by a thread, Angier makes the fateful decision to cross the line about which Lord of Illusions warned.

Realizing he can’t defeat Borden in the realm of illusion, Angier seeks out a wizard. In an odd turn, the forces of true magic are here represented by real-life inventor Nikola Tesla. 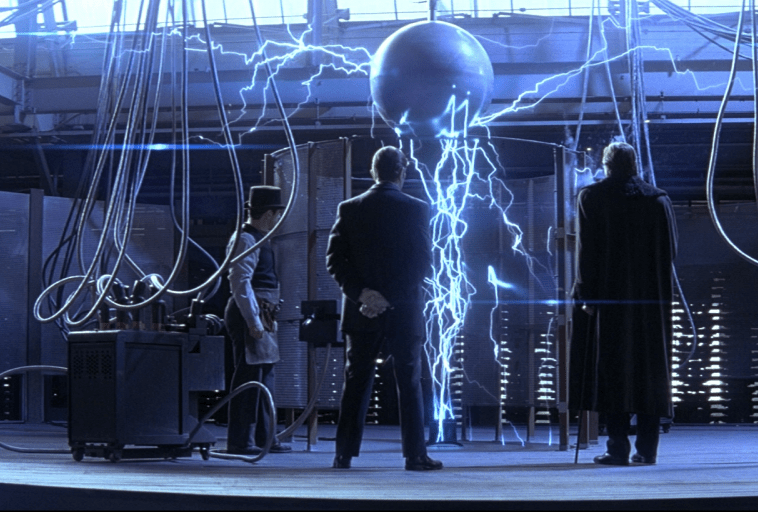 Nolan’s framing of Tesla as an actual wizard seems strange at first, but to his credit, he manages to sell the conceit. Angier finds the eccentric genius sequestered atop a remote peak in Colorado.

Consider the reason Tesla gives for his exile:

You’re familiar with the phrase, “Man’s reach exceeds his grasp”? It’s a lie. Man’s grasp exceeds his NERVE. The only limits on scientific progress are those imposed by society. The first time I changed the world, I was hailed as a visionary. The second time, I was asked politely to retire. The world only tolerates one change at a time. And so, here I am, enjoying my “retirement”. Nothing is impossible, Mr. Angier. What you want is simply expensive.

At first glance, Nolan seems to be appealing to Clarke’s “any sufficiently advanced technology” handwavium to ground magic in physics. But The Prestige‘s portrayal of “real” magic hints that the relationship may be reversed.

Edison’s men react to Tesla’s wizardry exactly as Swann feared the world would react to his in Lord of Illusions. They even go so far as to burn down the inventor’s lab.

Angier, Borden, and Cutter acknowledge Tesla as a wizard in direct contrast to their status as illusionists. Tesla himself acknowledges that distinction in his conversations with Angier, going so far as to proclaim, “Exact science is not an exact science.”

In meta terms, Nolan is probably referencing The Wizard of Oz, whose title character is widely theorized to have ben based on Nikola Tesla.

Then there are the effects of the machine Tesla builds for Angier, a demonstration of which leaves a jaded London booking agent humbled. 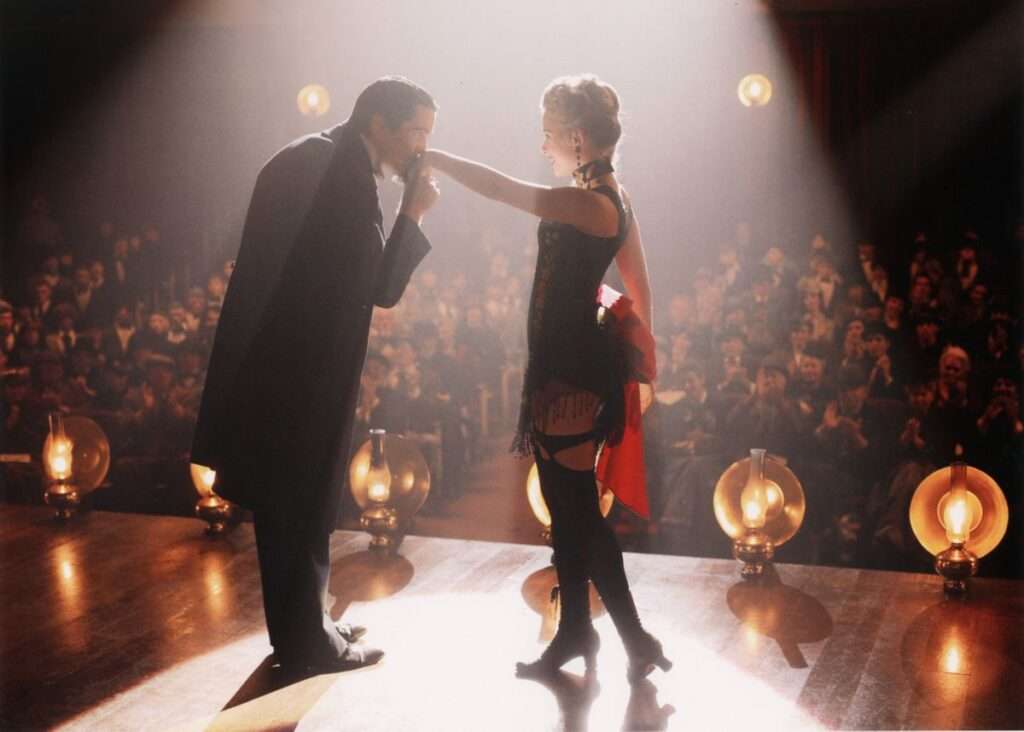 “Forgive me,” Ackerman, the world-weary sophisticate implores a triumphant Angier. “Real magic is so rare. It’s been years since I’ve seen …”

Nolan deftly conveys that if real magic exists in the world of The Prestige, this character would be the one to have seen it. He tantalizingly never tells us what Ackerman saw those years ago which he recognizes in Angier’s act, but it convincingly places Tesla’s machine among marvels.

And in using that marvel, Angier removes himself from the ranks of illusionists and steps into the boundless – and dangerous – realm of the wizard.

Lord of Illusions mainly shows the illusionist’s view of the wizard. The latter are despised, even feared, as freaks meddling with forces beyond human ken. 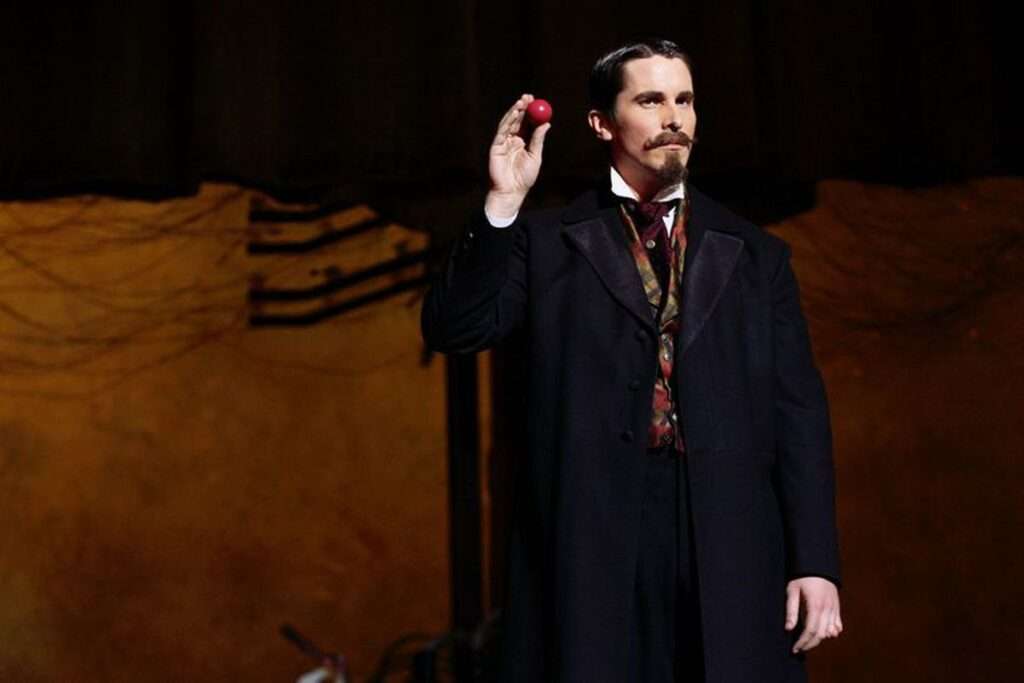 The Prestige gives insight into the wizard’s view of illusionists. In sharp contrast, the wizard respects the illusionist as a fellow craftsman whose trade takes the utmost dedication to master. Tesla gives the impression that he envies Angier’s ability to bring people joy by showing them false miracles that can never really challenge their conception of reality.

This point is reinforced when Ackerman tells Angier to disguise his miracle with stagecraft. “Give them a reason to doubt it,” he warns the fledgling wizard.

And still, when Angier debuts the Real Transported Man, the audience is too stunned to clap.

In contrast to Barker, Nolan depicts the evil which taints the wizard’s art as a subtler vice than trafficking with demons. Tesla sees in Angier a reflection of the obsession that drives him and warns him to destroy the machine. 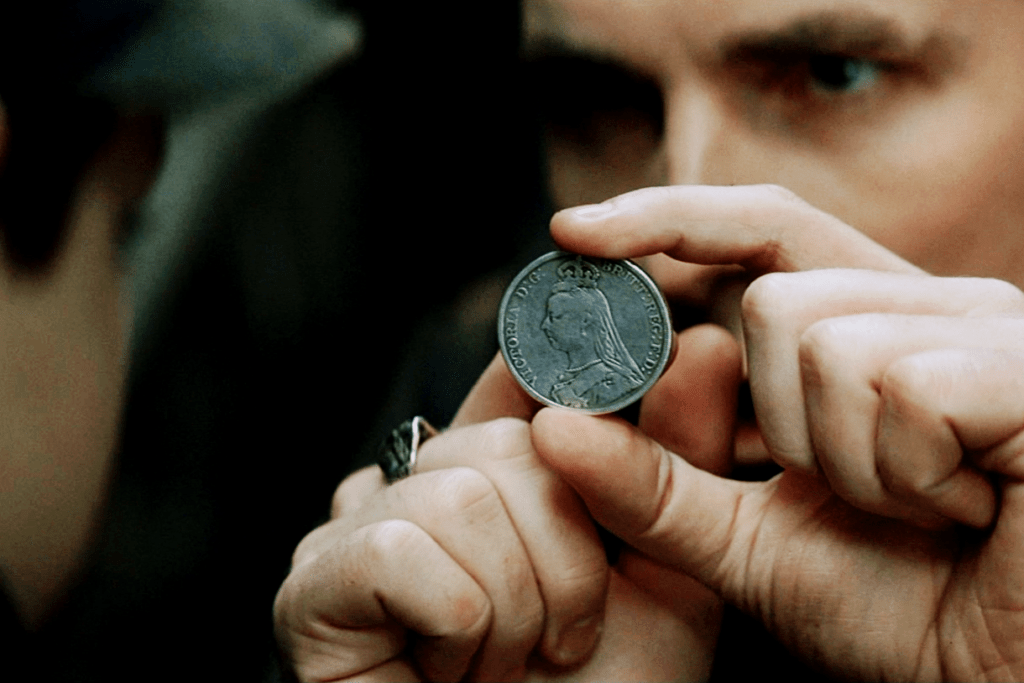 Like Barker’s Nix, Angier makes a terrible choice that renders him a monster. His magical power wins him worldly success, but it also incites his descent into mass murder, including framing Borden for Angier’s own.

Also like Nix, “a man who wanted to be a god … then changed his mind,” Angier’s sweet victory turns to ashes on his tongue. In terms of quantity, his evil exceeds that of Nix, even if his foe proves much less righteous than Harry D’Amour.

Taken together, Lord of Illusions and The Prestige present two parts of a trenchant morality tale with the same dire warning: Don’t traffic with diabolical forces.

Including those now in charge of Hollywood

Nicolas Cage Credits His Diverse Acting Career to David Bowie's Advice
Hugh Jackman: I Need 'Six Months' to Get Back in Shape for Deadpool 3
Black Panther 2 Gets Much Later Disney+ Debut Than Previous MCU Films
Notable Losses and Nostalgia for the Year 2022
Is Hugh Jackman's Deadpool 3 Wolverine Cameo Just a One & Done?
Does 'Ant-Man & the Wasp: Quantumania' Mark the End of Paul Rudd's Ant-Man?
Jurgens Has More to Say About His 'Death of Superman' Homage