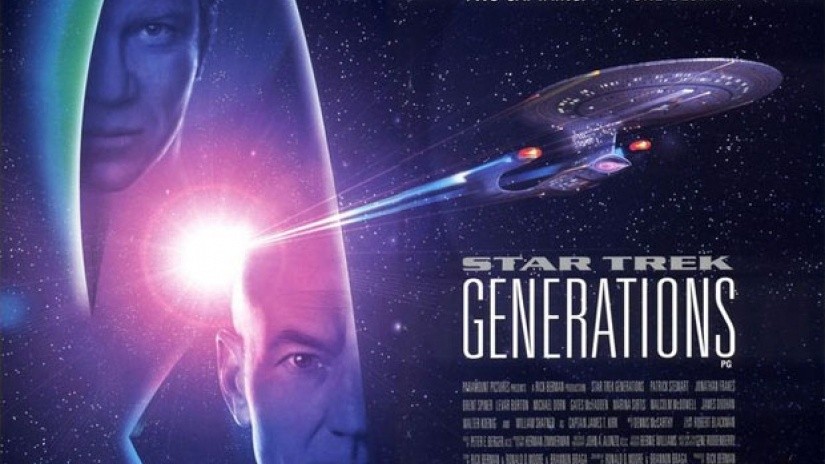 Way back in 1992, when pop culture was regaining its footing after the post-1980s hangover, I recall a friend telling me that another Star Trek movie was planned. It would feature the Original Series and Next Generation casts and be called Generations.

To understand my reaction to that claim, you’ve got to take on the mindset of junior high student before the internet. That bit of alleged Hollywood news had every mark of the big fish stories that made the rounds in the lunchrooms, arcades, and malls of the day.

“My uncle was a prop guy on Back to the Future II, and he smuggled a real hoverboard off the set. He buried metal tracks in his backyard so my cousins can ride it there.”

“I heard from [upperclassman movie buff] that Indiana Jones is gonna be in Star Wars: Episode IX. It makes sense because the first one happened a long time ago, so the last one’s set in the 1940s.”

“Nintendo lost so much business to Sega that they’re gonna stop making new systems. Instead, Nintendo will start making games for the Genesis next year. The first one’s gonna have Sonic and Mario together!”

OK, so the last one kind of did happen, but the other way around.

Regardless, I was already old enough to have seen these kinds of rumors spread like wildfire, then fizzle out. So I  suspected my friend was playing on my love of Star Trek VI to pull my leg. Both of us were big into TNG – as was everybody back in 92. A movie with Kirk, Spock, Picard, and Data seemed too good to be true.

And as it turned out, it was.

I was already in high school by the time Star Trek: Generations made it to the silver screen. But my interest in Trek was still stoked, thanks in part to the then-current Deep Space Nine. So I rushed to the theater, eager for some planet-hopping fun.

Here’s where this review gets awkward.

When I set out to review the Star Trek film series, I approached the project with an existing set of biases and assumptions. It’s fascinated me to see how much my opinion of certain entries in this franchise have changed. For example, I used to hate Star Trek IV, but rewatching it gave me a greater appreciation for its humor.

Something similar happened when I rewatched Generations; but again, in reverse.

Because I loved this movie from the first time I saw it. Even the notorious Red Letter Media’s negative review struck me as nerdish hyperbole.

Yet, having recently watched Star Trek: Generations again, I’ve had to reevaluate my opinion of this film.

Maybe I got taken in by the hype machine. My house didn’t have the internet yet, so it wasn’t as if STG’s pioneering web site beguiled me.

Looking back, I think the three-year gap between Trek films played a role in my wholehearted embrace of Generations. And now, having watched every movie back-to-back, I have clearer discernment of STG’s warts.

Nevertheless, these and other merits don’t make up for the feeling of weirdness that pervades the film.

What do I mean? To be more specific, STG misses the mark in many small ways that add up to make if feel … off overall.

A subtle but significant detail: the lighting – especially aboard the Enterprise D

It doesn’t quite come through here, but this image gives you an idea of the problem stemming from the film makers’ lighting choices.

They look to have been going for a more “cinematic” feel by changing how they lit the TV series’ sets. But the extremes of light and dark – in particular the shadows all over the place – make for an uneven composition.

By way of contrast, the TNG episode “Yesterday’s Enterprise” managed to nail cinematic sci fi lighting – on the same sets. 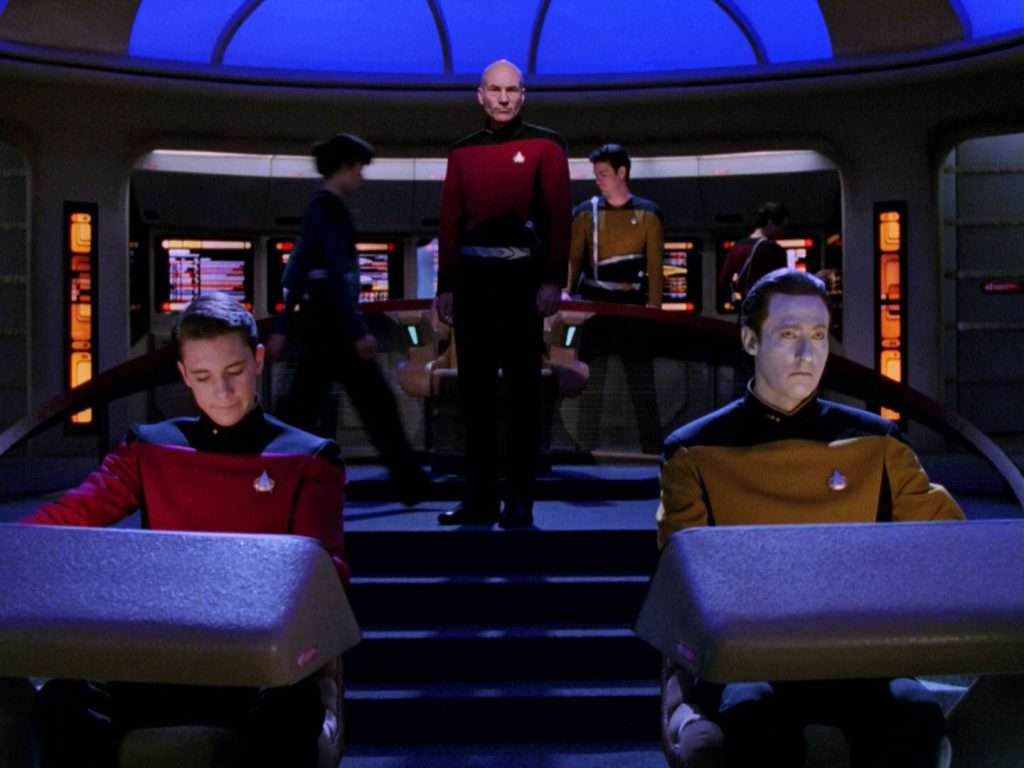 The latter has that classic Trek “submarine warfare in space” look. 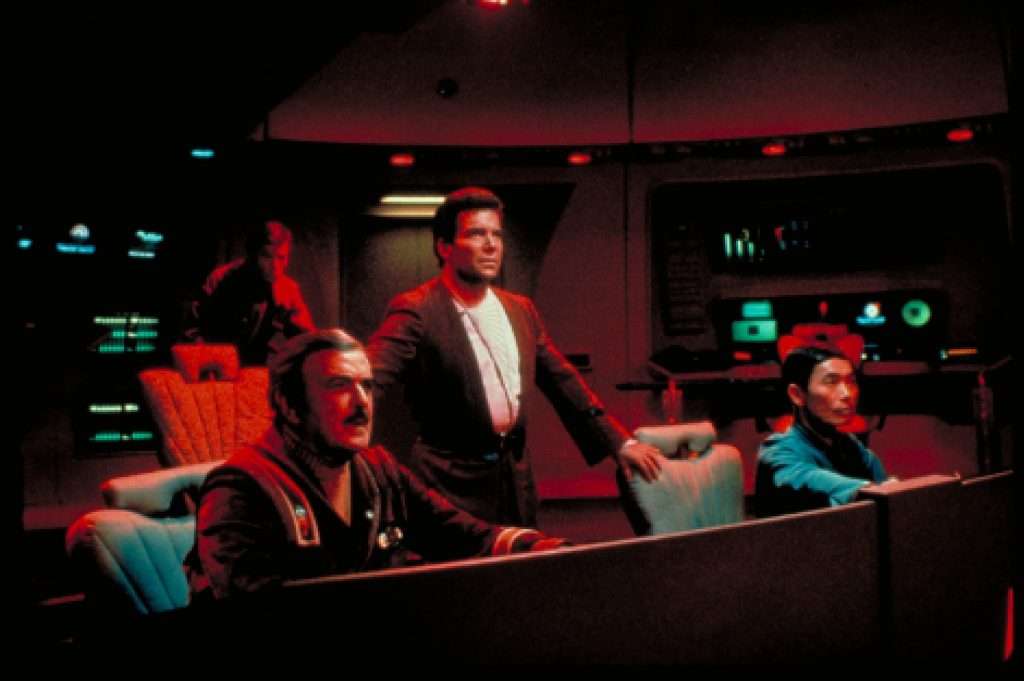 OK, I’ll level with you. This post has been so image-heavy because I’ve been putting off discussing the plot.

It is a Griswoldian Christmas light knot of tangled narrative threads.

Not only do you have time travel, but also flashbacks, flash forwards, character doppelgangers, do-overs, and pretty much every confusion-inviting trick I advise new writers to avoid.

We start out in 2293 with Kirk, Scotty, Chekhov, and Cameron aboard the maiden voyage of the Enterprise B.

The ship runs into an energy ribbon that’s sucked in a bunch of refugees, and she almost gets trapped herself. But the dream team mentioned above gets the Enterprise free and saves 47 refugees.

Who they don’t manage to save is Kirk. He’s considered KIA due to this mission. And it’s likely the writers were trying a Wrath of Khan style misdirection by giving the beloved character a fake death in the prologue. But it doesn’t work since everybody knew from the marketing blitz that Kirk gets to meet Picard later.

We then have a flash forward – which is initially presented as a flashback. But again, it misfires because setting part of the story in the age of sail would make no sense. Plus the audience knows that holodecks exist.

If you’re a longtime reader or a client of mine, you may be familiar with my perennial advice to authors “Be clear, not clever.”

STG inverts that sage advice every chance it gets.

Which is why the story’s as crooked as a hound’s hind leg.

Anyway, the movie pauses to have some character moments with the TNG crew. Only Picard’s are good. They not only give insight into his disposition but reinforce the movie’s main themes of time and mortality.

They also highlight the emptiness of Roddenberry’s “Future man has evolved beyond religion” ethos. Picard derived his sense of meaning from his family. Now that his brother and nephew are gone, his choice to be a genetic dead end plunges Picard into a crisis of meaning that he never quite resolves.

Important side note: The original script showed Kirk’s funeral, set in a church, which Scotty, Bones, and Spock attend.

Supplemental important side note: STG was the first Trek film made after Roddenberry’s own passing, and the creative team decided to jettison a lot of his dumb ideas. Keeping the funeral scene would have been top kek.

When Picard’s done blubbering about his poor life decisions, we finally get the thread that ties the prologue into the main action. A certain Dr. Tolian Soran demands a meeting with Picard. At that meeting, we learn that Soran was among the refugees rescued by the Enterprise B.

A little later, we learn that Soran wants to blow up a number of suns so he can get back into the energy ribbon he was beamed out of back in 2293.

The Klingons who’re in cahoots with Soran are holding Geordi. So Picard proposes a convoluted prisoner exchange that ends with him beaming down to the planet where Soran is prepping his final sun-killing rocket for launch. But no one thought to check Geordi’s VISOR for bugs, so the Klingons are able to pull another WoK ripoff and shoot down the Enterprise D by matching their weapons to her shield frequency.

So the star gets destroyed, along with the planet Soran and Picard are in. And Picard ends up in the Nexus (no relation to the concept of the same name in the Soul Cycle.) STG’s Nexus is a parallel dimension without linear time – kind of like the Scholastic concept of Heaven. Despite being told that no one who makes it in ever wants to leave there, Picard exits his dream world after about five minutes and meets up with Kirk.

Yes, it turns out that Kirk didn’t die aboard the Enterprise B. He got sucked into the Nexus, where Picard is able to find him the instant he arrived due to a flashback/flashsideways/time travel/????

Which is kind of a dick move. Kirk deserved a reward for his long service to Starfleet. The least Picard could have done would’ve been to give Jim a couple months to enjoy himself before drafting him to fight Soran.

Anyhow, Kirk also agrees to leave the Nexus. So Picard takes them both back to stop Soran before he shoots his final rocket. It’s the only time a TOS character meets a TNG character in the whole movie. Then Kirk dies, courtesy of a collapsing bridge, and Picard buries him on a backwards desert planet.

“Why didn’t Paramount fix that lame death scene after test screenings?” you may ask.

The answer is that test audiences hated Kirk’s original death scene, which was even worse, and the one we got is the superior, fixed version. 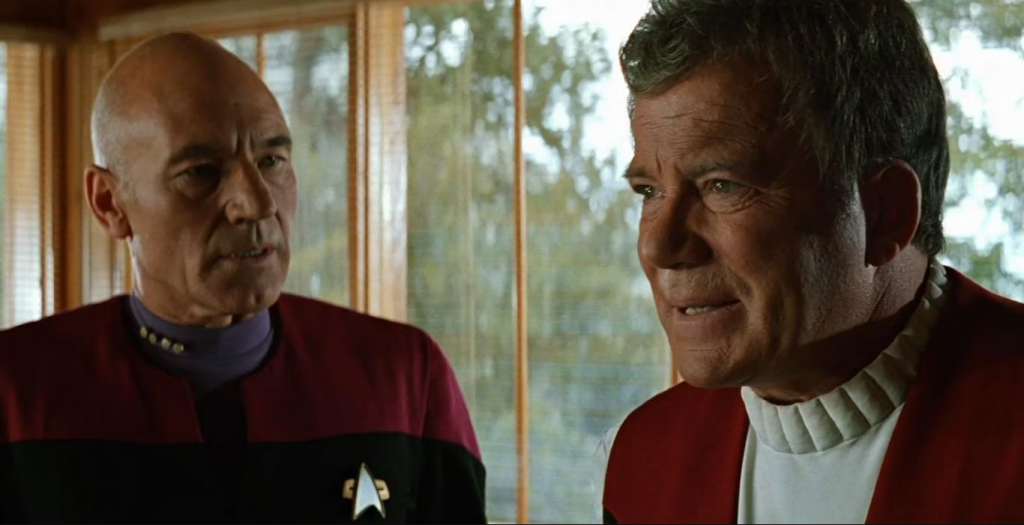 So Picard witnesses the end of his family, his ship, Captain James T. Kirk, and his one shot at beating Father Time. But for some unexplained reason, he shrugs and says, “Time is a friend that accompanies us on the journey.”

Conveniently leaving out the important prepositional phrase “to the grave.”

That’s it. That’s how the movie resolves the serious question at the heart of its central theme: Y-ilist shrug-and-laugh absurdism.

In the final analysis, you end up with something like a long TV series episode padded out with superfluous twists and turns.

Two-part TV Episode syndrome is an issue that plagues the TNG films in particular. We’ll encounter it again, but not before we analyze our next Trek film.

Which gets off to a strong start by bringing back sexy Enterprises. 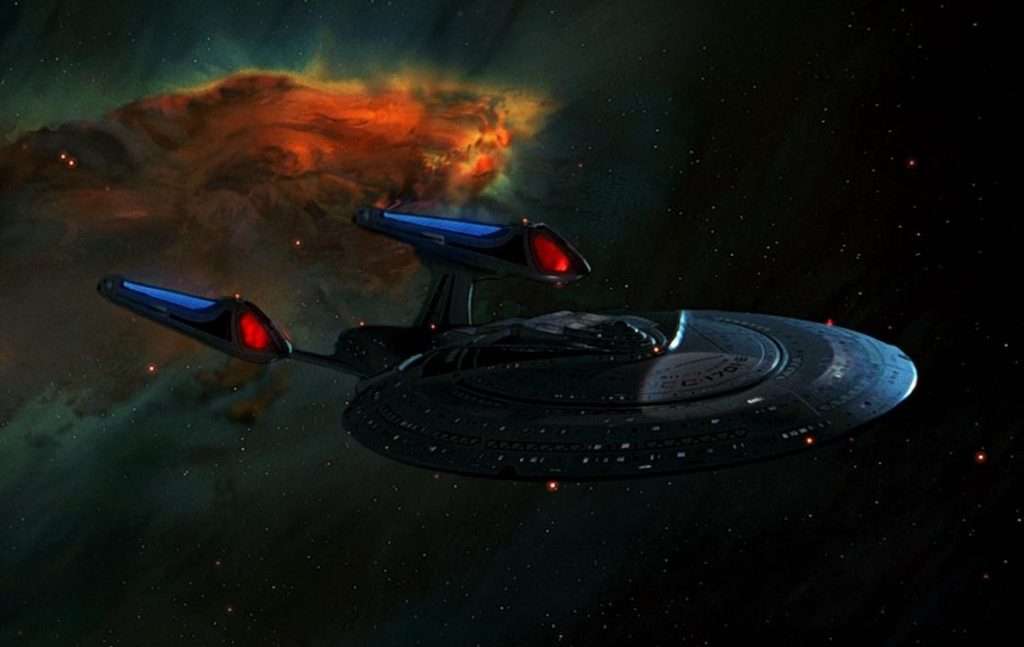