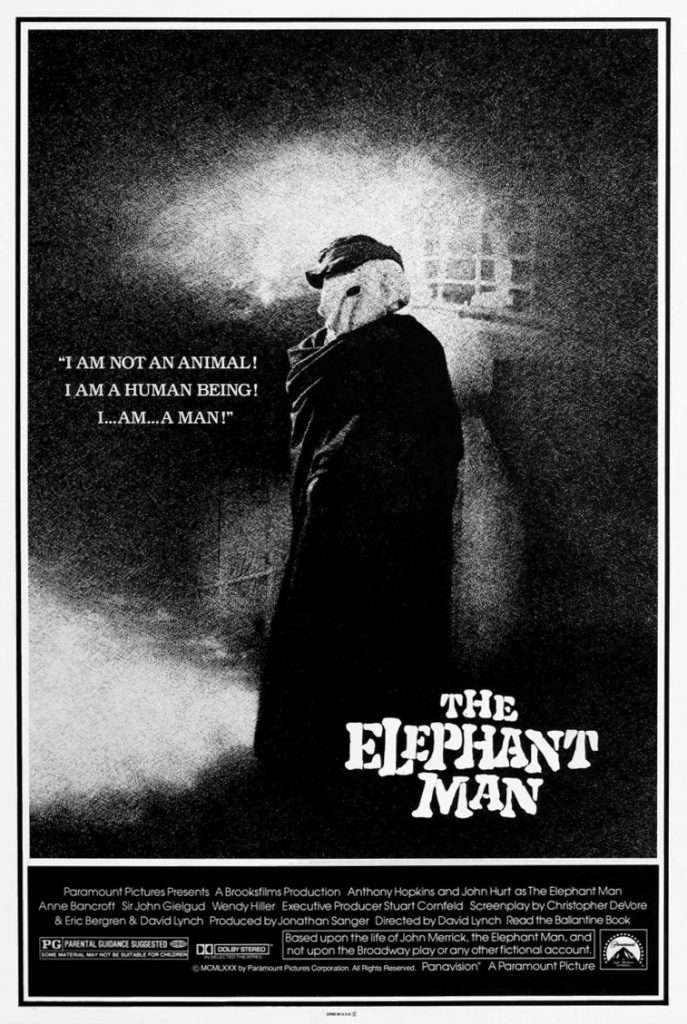 #8 in my definitive ranking of David Lynch’s films.

David Lynch’s second film is held up as one of his best, but I think it’s hampered a bit in a couple of spots that keeps it from greatness. There are wonderful performances from an incredible cast throughout, the production is amazing to simply look at, and the makeup effects are great, but there are also some dramatic moments introduced that feel wrong to me and the use of industrialization as a motif feels out of place where, in Eraserhead, they had felt incredibly appropriate.

The story of the historical elephant man, Joseph Merrick (whom they call John, probably because of the source text written by…the man who treated him in the hospital) and his time in the London Hospital under the care of the doctor Frederick Treves, The Elephant Man is about a man who can only ever be an outsider trying to find his place in society. Hobbled by deformities across his entire body, most grotesquely on his head and face, Merrick can never be seen by society as large as any more than a freak.

When Treves discovers Merrick, Merrick is a sideshow attraction under the management (perhaps ownership) of Mr. Bytes  , a brutal drunk who’s been struggling to maintain his existence because Merrick is so deformed as to upset local authorities. Taken into a dirty back alley, Treves sees Merrick for the first time with Mr. Bytes giving his traditional introduction that includes the fable that Merrick’s mother was attacked by elephants while carrying him, which, he assures the audience of one, is the source of the deformities. After Treves convinces Mr. Bytes to allow Merrick to come to the hospital for a display to some fellow doctors (mirroring the show in a more clinical environment) Mr. Bytes beats Merrick hard enough that Treves must come to provide his services. Due to the violence of the beating, Treves brings Merrick to the hospital as a patient, underhandedly without the permission of the hospital’s governor because Merrick’s condition is both untreatable (the deformities, which are not the purview of the hospital) and standard (the beatings, so he should be with the regular population). Through a series of events where Merrick demonstrates his intelligence through his slurred speech as he quotes the 23rd Psalm and news reaches Queen Victoria of the hospital’s generous treatment of Merrick, leading to a visit from Princess Alexandra, Merrick gains a permanent station in the hospital. 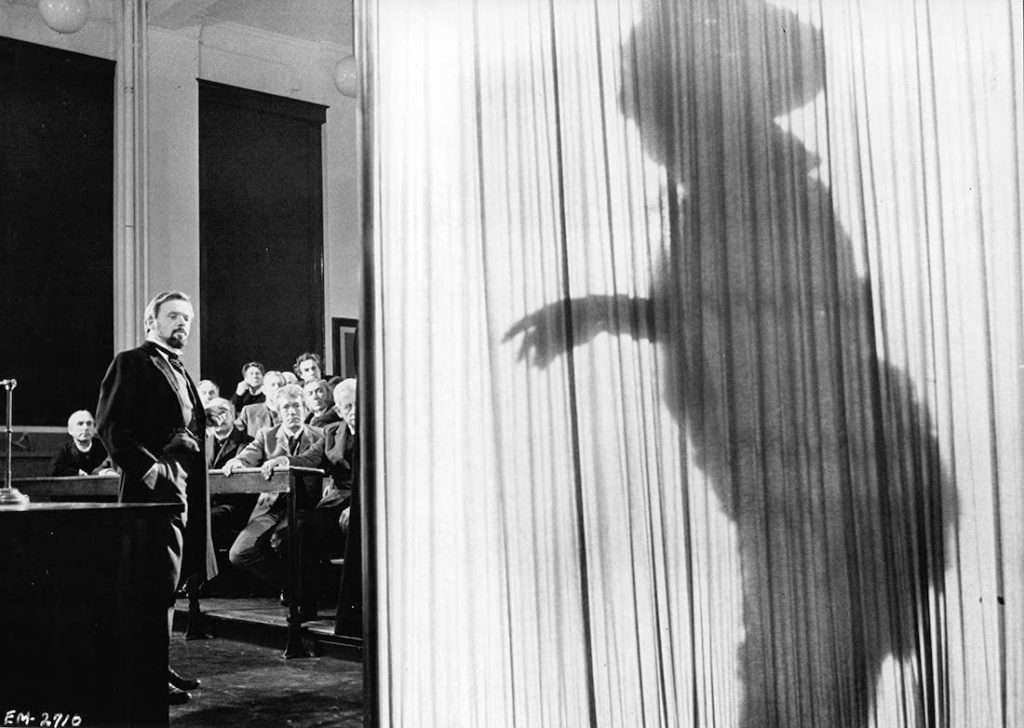 Where this movie works best is where it treats the different sections of society and their views of Merrick. We start the film with Treves as he navigates the carnivalesque atmosphere where Merrick finds his home. He brings him to the hospital for doctors to gawk at. When Merrick has to justify his presence in the hospital, Treves teaches him to put on a show. When Merrick gains his place, he gains a steady stream of upper class visitors who don’t seem able to stomach the view of the deformed man, but they go for social status reasons. How different is Treves at a certain point from Bytes? Instead of parading Merrick around in a cage, he’s keeping Merrick in a small room in the hospital and parading the upper crust of London society to view Merrick in the same way the lower classes viewed him at the carnival. Can Merrick ever become a normal member of society? These are fascinating questions.

One way that this gets played out is through the night watchman Jim. Knowing his position allows him to exploit Merrick easily to his own financial gain, he goes to his local pub and brings along a dozen or so drunken visitors to gawk at Merrick through his window every night, making a pretty penny for himself in the process. The distinction between the carnival and the hospital collapses completely when Jim shows up, in particular when he shows up with Mr. Bytes who steals Merrick away. This section of the film, late in the running time, feels false to me. It doesn’t help that it didn’t actually happen (but neither did Bytes’ [based on the real Tom Norman] general mistreatment of Merrick, and I have no problem with that), but this sudden kidnapping feels like a distraction in the story. I’m not sure what it’s supposed to contribute, but it does end with the most famous part of the film when Merrick makes it back to London with the help of the fellow freaks in Bytes’ circus. Chased by the denizens of London at the sight of his freakish visage, he shouts that he is not an animal but a human being, highlighting the central tension in the film. Merrick is a human being, but he’s so disfigured that society at large simply cannot accept him as just another man. Uncurable by Treves, the only place he can be treated normally is in an enclosed environment with a handful of people, almost like he is an animal. There’s the tragedy of the film. I think that I would come closer to finding greatness in the film centered on that idea if it didn’t take that third act detour into Bytes stealing Merrick away. 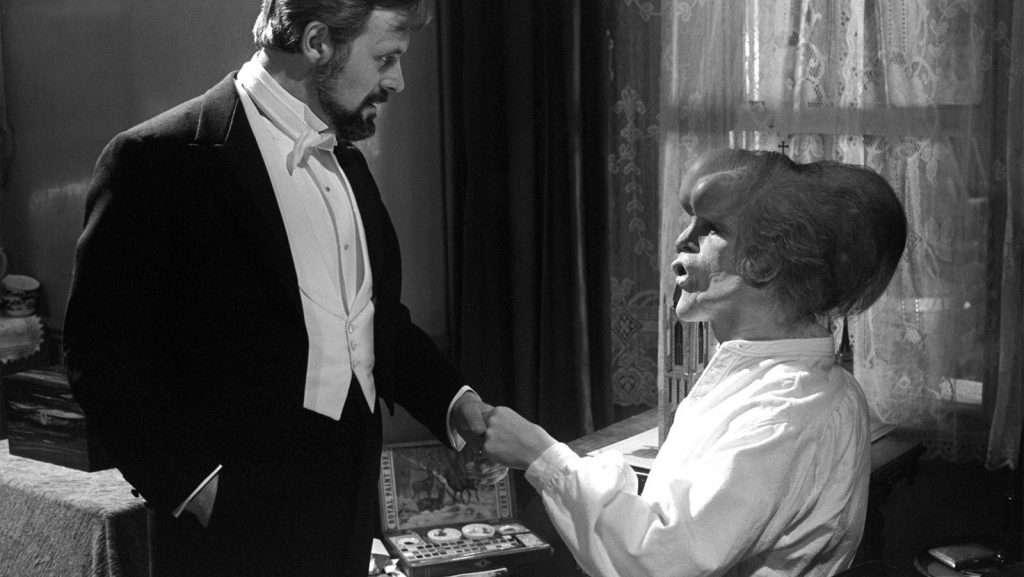 I mentioned it at the beginning, but as Lynch did in Eraserhead, Lynch intercuts images of smokestacks belching black smoke with the action from time to time. I don’t really see the connection between society’s mistreatment of Merrick with industrialization, though. It could imply a sickness of the world, but that sickness doesn’t seem tied to the technological innovation brought on by the industrial revolution, instead reflecting a more permanent state in our souls. So, I sort of get the point, but I don’t think it works. He chose the wrong image to make the point. 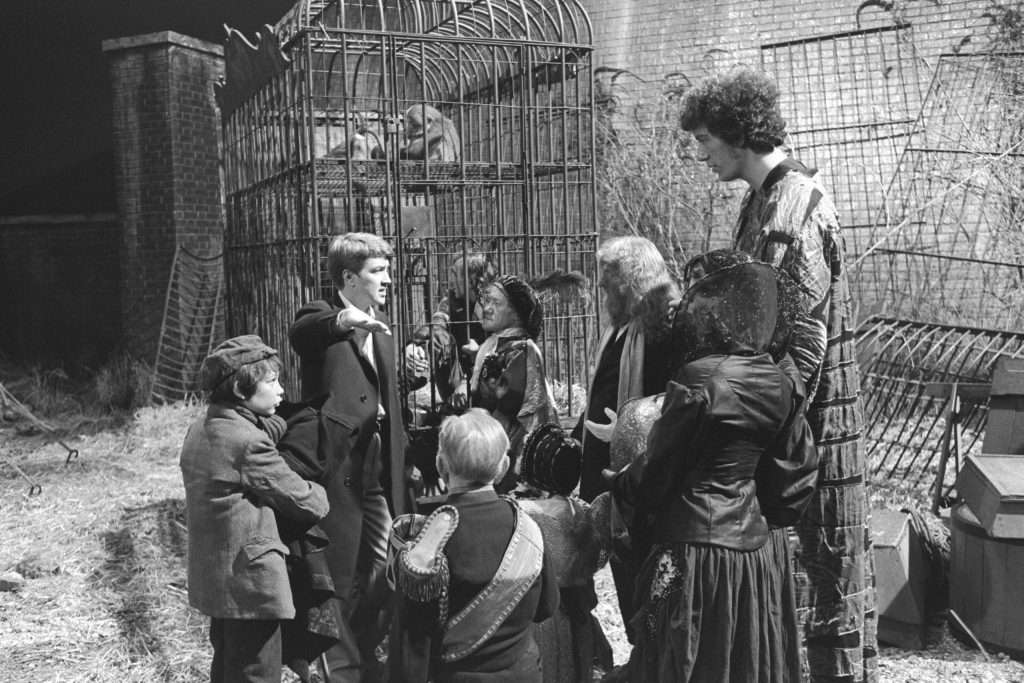 John Hurt is kind of amazing through the pounds of makeup, providing a wonderful sense of pained humanity to the deformed Merrick. Anthony Hopkins is solidly composed as Treves. John Gielgud is kind of perfect as Carr Gomm, the hospital director. Freddie Jones provides a wonderful sense of humanity to the cruel Bytes. Lynch really does have a good hand with actors, understanding how to most effectively use them within a story. 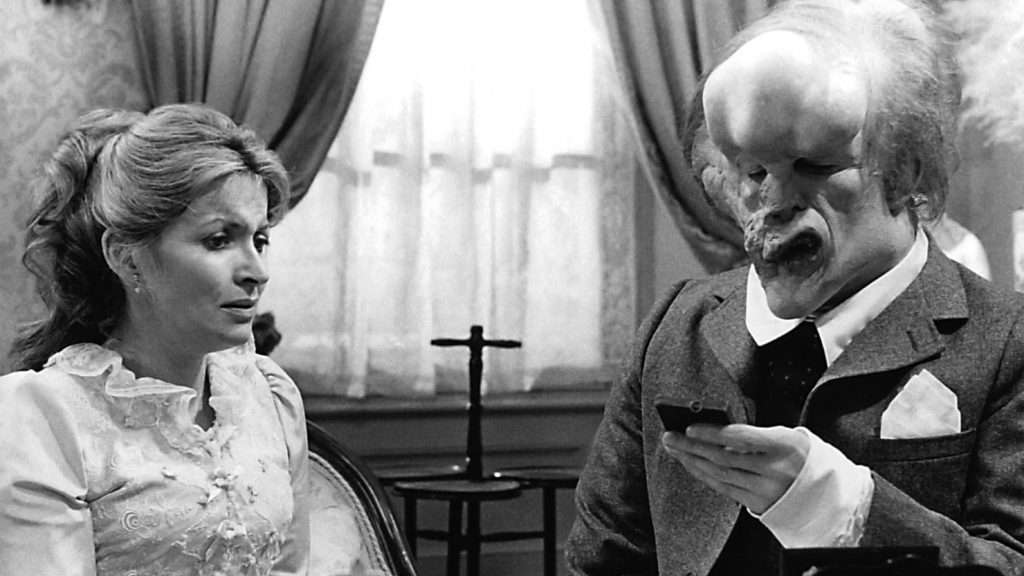 Overall, I think this is a good film that takes some of its departures from the reality of the story poorly. This is a cynical look at how society treats those who are unable to help their differences, how society at large simply cannot seem to find it within itself to treat someone based on their character rather than their looks. Some of the dramatics inserted distract from that central idea. There’s so much to admire, though, that the late turns in the story can only hold this movie back so much. I can understand some of the long-standing love this film gets, especially from those who are less inclined to Lynch’s more surrealistic impulses, but I just don’t share it, feeling a certain admiration instead of adoration.