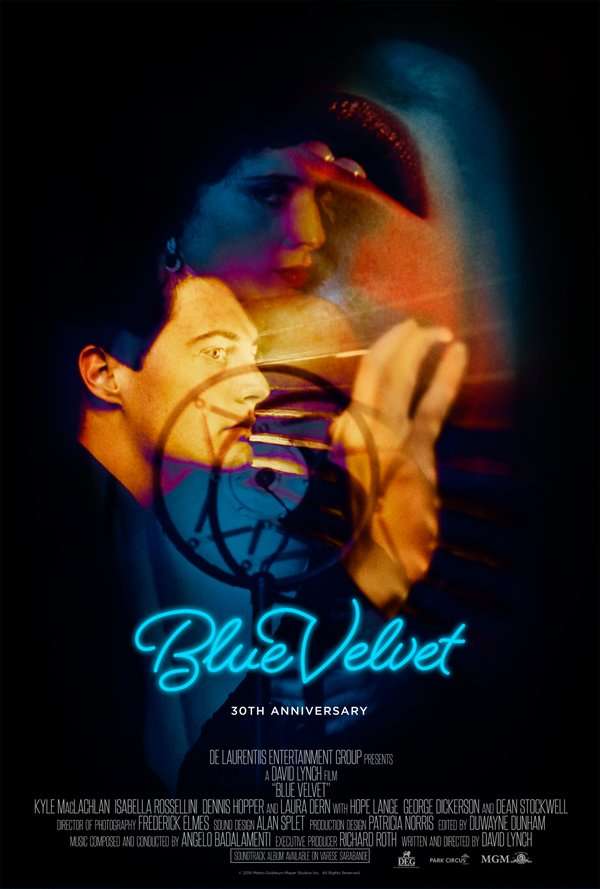 #5 in my definitive ranking of David Lynch’s films.

In some ways, this reminds me of Stanley Kubrick’s reaction to directing Spartacus, a movie he had no creative control on and found deadening, by directing Lolita as his follow up. For Lynch, Dune was a draining experience of constant compromise that led to the end result of a less than stellar film, so he followed it up with an intensely personal film at a much smaller scale where he had full control in Blue Velvet.

Blue Velvet tells the story of Kyle MacLachlan’s Jeffrey who investigates a weird crime and potential murder in a small town with a logging industrial footprint, finding that the thin veneer of Americana hides a seedy underbelly of corruption, sex, and murder. Sound familiar? Yeah, it’s a prototype of Twin Peaks.

Anyway, Jeffrey Beaumont has come home from college to the small town of Lumbertron, North Carolina after his father had a heart attack. Walking back from the hospital one day, he discovers a human ear in a field. Taking it to his neighbor, a police detective, and learning some key pieces of information from the detective’s daughter, Sandy, Jeffrey enters into a dangerous world that he might not survive. His entry point is a lounge singer, Dorothy Vallens, who was under surveillance by the police on an unrelated matter that got brought up to Detective Williams. Jeffrey sneaks in, hides in her closet, and watches a horrid display of sadism and masochism when Frank Booth shows up to extract what he wants from Dorothy. 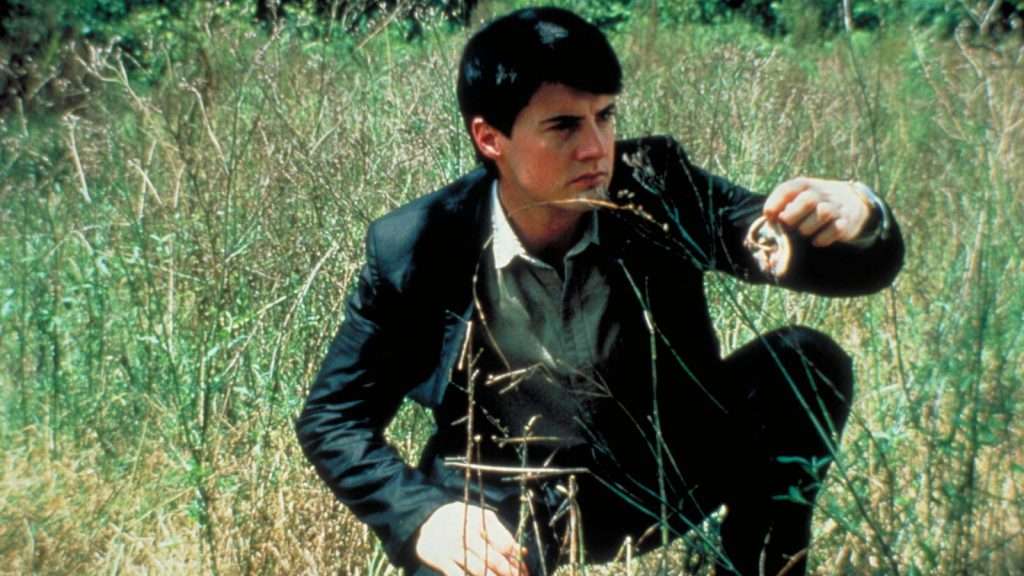 These two characters, Dorothy and Frank, represent an extreme of choice open to Jeffrey, the young man still figuring out who he wants to be. On the other end are his father in the hospital and Sandy. Sandy is the good girl, the daughter of a good policeman, who wants to love and be loved. Dorothy and Frank represent a more dangerous, exciting, and degrading life of abuse, and what Jeffrey discovers is that for all he was brought up to believe in one code of behavior, he has it within himself to fall into Frank’s lifestyle. That comes to the fore for him when he makes love to Dorothy and he hits her at her insistence. 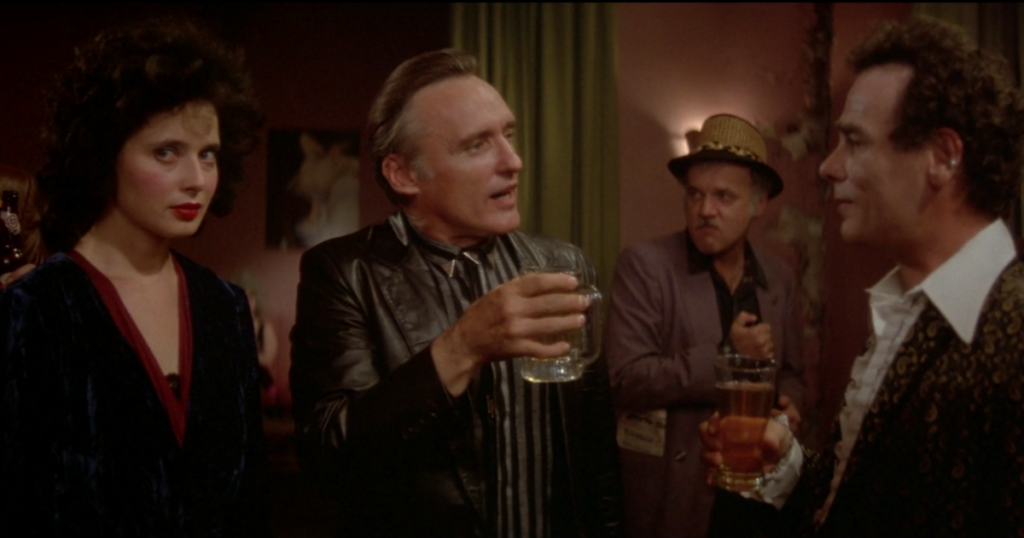 That leads me to this very obvious observation: Blue Velvet looks at a very ugly side of life, and it looks at it unflinchingly. However, what makes it most interesting is Lynch’s ability to balance vastly different tones within the same scene. This was obvious in Eraserhead, but he had never really managed to deal in the same kind of tonal shifts with The Elephant Man and Dune, at least at the same level. Blue Velvet represents an extreme example of this, and quite possibly my single favorite scene in all of David Lynch’s filmography does it in this film. 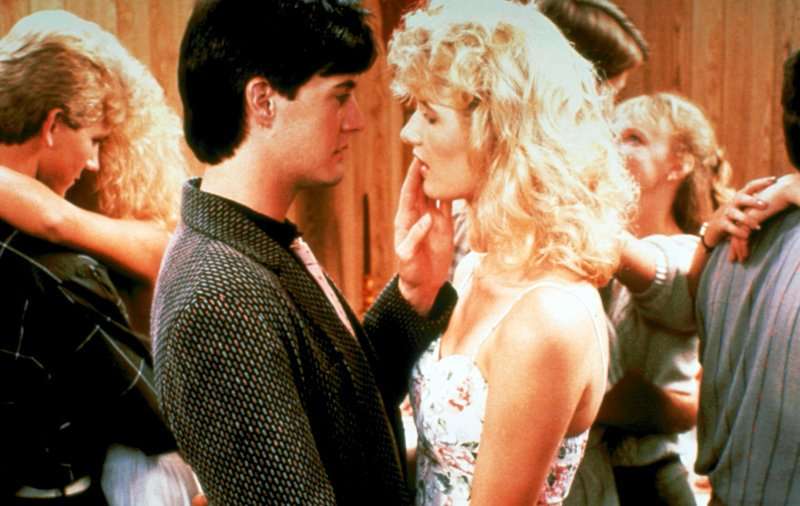 Jeffrey has gotten in too deep, and Frank has discovered him. Frank has every intention of intimidating and threatening Jeffrey, maybe even killing him. Frank Booth, you see, is a marvelous cinematic creation from both David Lynch and Dennis Hopper. He’s a deranged freak killer who inhales amyl nitrite to enhance his sexual experiences (changed from helium in the script, which would have been hilarious but perhaps distractingly so) and has turned Dorothy into his sex slave by kidnapping her husband and child. Her husband is the proper owner of that ear that Jeffrey found. He is the only one to curse (aside from one single instance where Frank forces another to say it), and his dialogue is laced with profanity. He sticks out from everything around him all the time. He’s like a force of nature, an elemental creation that has the motivation of a hurricane approaching a coastline. He is a purely destructive force manifested in a man, and his success as an onscreen villain has everything to do with Dennis Hopper. Fresh off of going sober after years of alcohol and drug abuse, Hopper knew he was on extremely thin ice and that this part was a goldmine. He gave the part his all, imbuing Frank with such interesting malevolence that he’s always fascinating to simply watch. Frank’s malevolent best and the movie’s deft balance of wildly different tones come together in one particular scene best. Frank takes Jeffery and Dorothy to Ben’s whorehouse where he is keeping Dorothy’s husband and child. The scene as Dorothy cries in the other room at the sight of her son while Frank demands cold Pabst Blue Ribbon from one of the women and Ben mouths the words to Roy Orbison’s “In Dreams” is such an expert combination of menace, terror, and hilarity at the same time. 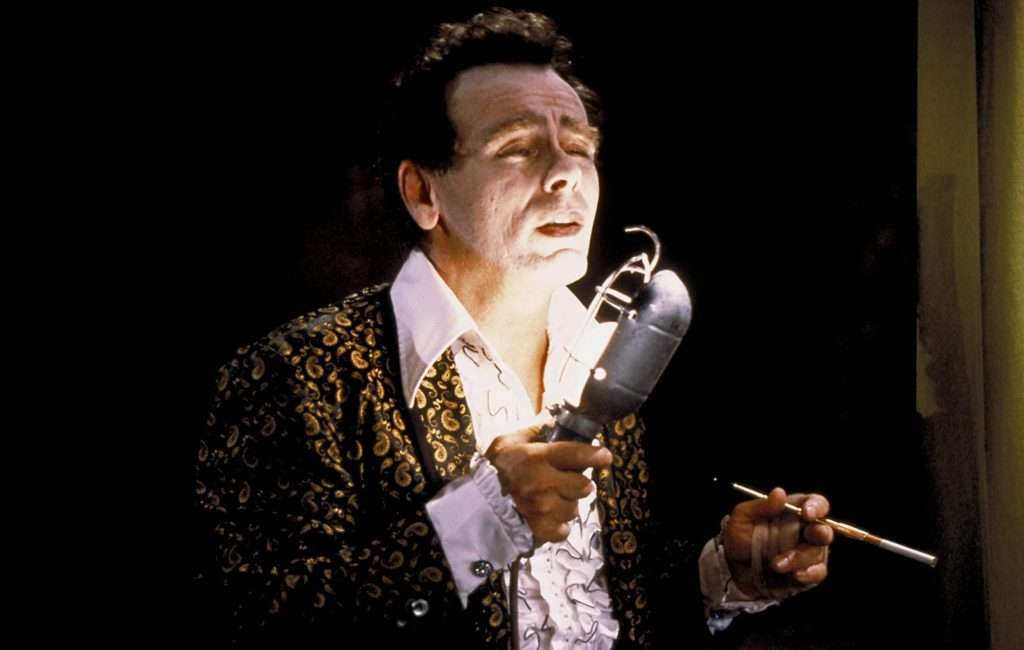 The movie’s one flaw, I think, is Dorothy. Isabella Rosellini threw herself into this role, baring herself literally and figuratively in portraying a woman in and of an abusive relationship, but I think she’s a bit underwritten. I would imagine that she’s given more time to breathe and exist in the two hours of deleted scenes, an hour of which Criterion managed to release on the Blu-ray, but she has the makings of such a complex character who could center an entire film on her own instead of being a supporting character in Jeffrey’s story of becoming his own man. There’s more to her, and I think a lot of it ended up on the cutting room floor. Jeffrey, however, is the main character and everything that happens in this movie is about him discovering the truth of the world around him and about himself. He could be a good, quiet man like his father, watering his lawn by hand, or he could be like Frank, abusing Dorothy at her own insistence. The resolution is all about him making that choice, and it’s not about being a pure version of either. He has to do something awful in order to choose the right path. 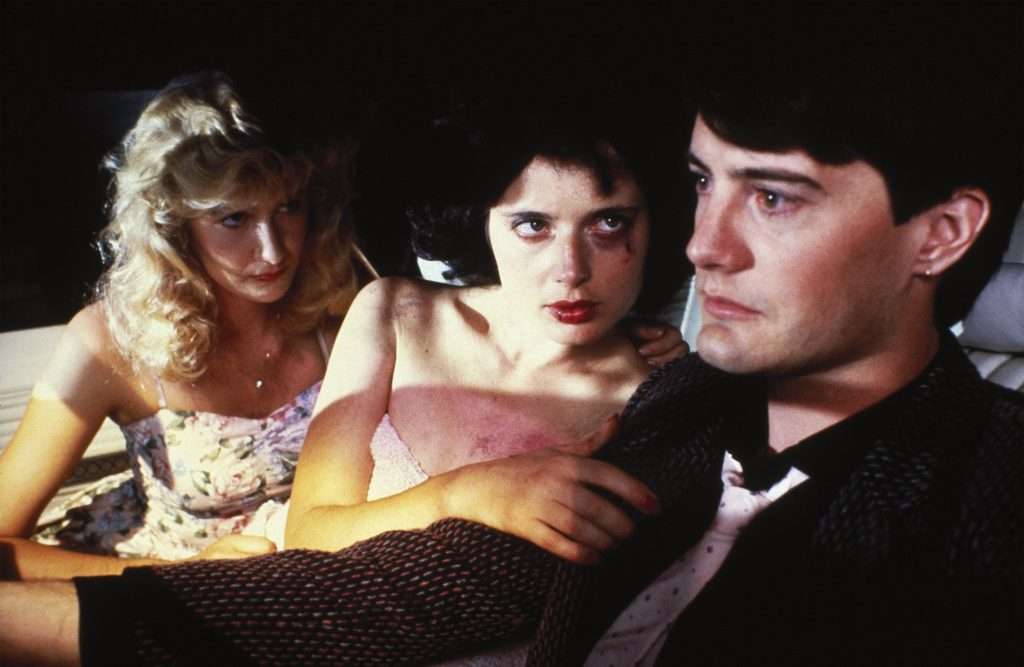 Blue Velvet is also one of the best combinations of image and narrative Lynch has. Thinking of the final major sequence, where Jeffery shows up at Dorothy’s apartment to find the man in yellow standing with an exposed head wound, Dorothy’s husband tied up in a chair, and the television playing, Lynch’s creates this surrealistic moment that feels extreme and of the reality of the movie at the same time. There’s also the look of Dorothy singing on stage, draped in a blue dress with a red curtain behind her that pops in the frame. The movie is really visually fascinating and eye catching all the way through.

Aside from the underwritten nature of Dorothy, this is Lynch reclaiming who he is as a filmmaker in grand fashion. He’s telling a distinctly American story born from his own experiences growing up, informed by his own distinct method of storytelling that borders on dream logic.