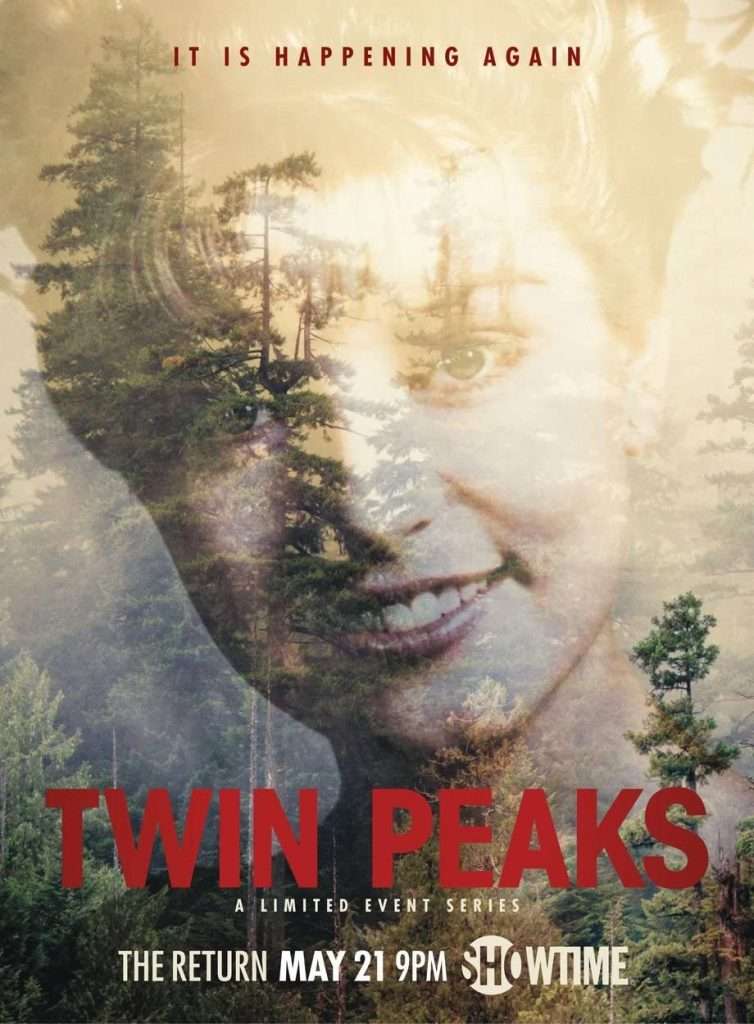 #3 in my definitive ranking of David Lynch’s films.

This really is an 18-hour movie. From beginning to end, it’s the same pair of writers, Mark Frost and David Lynch, the same director, Lynch, and the same cast in the same production telling one very long story. That it was released in individual episodes on Showtime makes little difference, I think. It’s also my favorite piece of storytelling from the entire franchise of Twin Peaks. The first season is good, but its adherence to a pretty much dead genre, the primetime soap opera, limits my enjoyment of it. The second season has a real dip before ending strong. Fire Walk With Me is very good, but suffers from the hope that it would spawn further movies. This return is a go for broke attempt at creating the combination of quality character based storytelling and weird mythology that made Twin Peaks at its very best.

There’s so much to go into this in terms of story beats, as you might expect from an 18-hour long story with over two hundred speaking parts. At its most basic, this series is about FBI Special Agent Dale Cooper returning from the Black Lodge where he’s been held prisoner for twenty-five years, BOB in the body of a Dale doppelganger trying to stay on Earth instead of returning in exchange for Cooper, and the events around them that lead them back to Twin Peaks, Washington for their final showdown. Along the way, we see returning faces from the original show like James, Big Ed, Norma, Deputies Hawk and Andy, Lucy, Gordon Cole, and Arthur. We are also introduced to a bevy of new characters like Richard Horne, William Hastings, the Mitchum Brothers, and Janey-E Jones. We also get introduced to new elements of the mythology like the Eyeless Lady, Judy (who might be the Experiment), tulpas, and the Woodsmen. 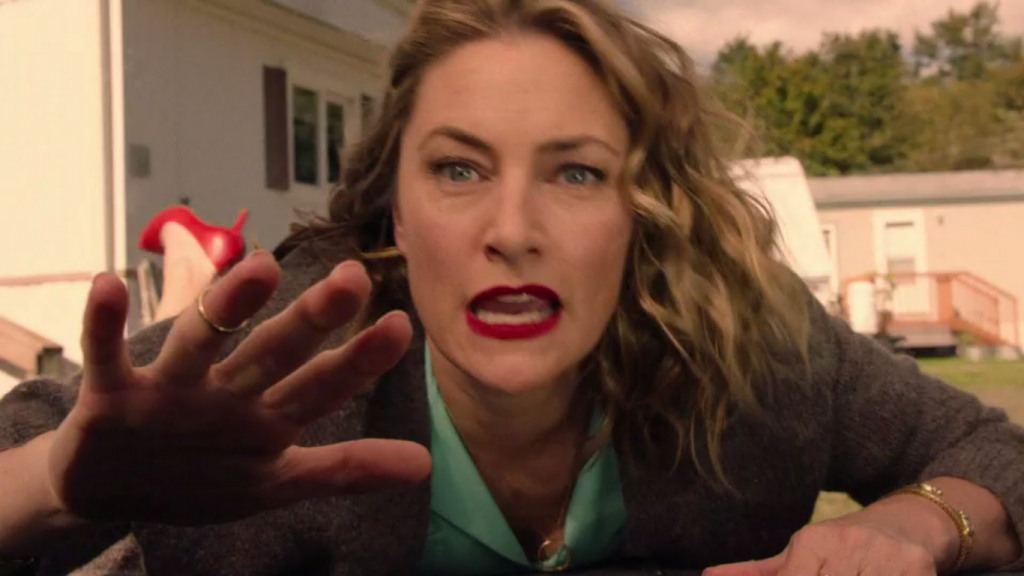 There is a lot going on in this show, and like much of Lynch’s work, there’s a strong story that undergirds all of this. Well, there are several stories that all end up converging towards the end. For those who liked the original show’s look at quirky characters, we have our regular look-ins at the denizens of the little Washington town and their lives like Shelly and Bobby dealing with their daughter and her scummy husband. On the other hand the film is alive with Lynch’s typical brand of abstractions that color his stories. The most prominent of these is Part 8, but I’ll get to that in a minute. So, Dale Cooper gets sent back, but Bad Cooper knew this day was coming and created a tulpa, a copy of himself, to try and direct Cooper into the tulpa rather than the doppelganger body BOB currently inhabits with a hit team standing by to kill Cooper in the tulpa’s place as soon as it happens. Cooper is a sign of hope and life in the decaying world of Twin Peaks, so he easily evades the attempts. However, there’s a twist. Cooper in the place of the tulpa is like a walking baby. He needs to be pushed in every direction anyone wants to go, even to the bathroom, and Dougie, as the tulpa is known, is one of the joys of the series. His innate goodness and positive effects on those around him is like a warm blanket. He barely knows what’s going on, often just repeats the last few words of a sentence he hears, and follows signs from the White Lodge around to help guide his actions, like when he chooses slot machine after slot machine that each give him a jackpot in the Silver Mustang casino, owned by the Mitchum Brothers. This gets him on the brothers’ radar, especially when they hear from Dougie’s co-worker at Lucky Seven Life Insurance that Dougie was responsible for the brothers losing out on a $30 million settlement on a fire at one of their building. Through Dougie’s innate goodness and help from the White Lodge, he scribbles on some insurance forms that convinces his boss that the $30 million was incorrectly denied, which gets the Mitchum Brothers to love Dougie and stay with him through the end of the story. It’s kind of a pure joy to watch it all unfold. 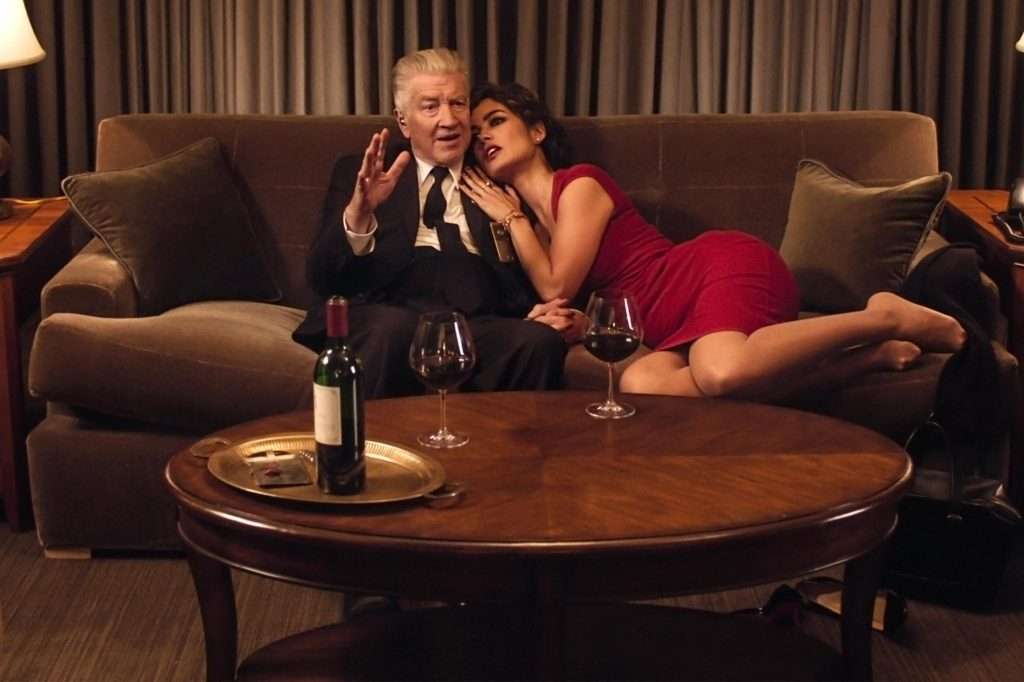 The opposite of Dougie is Bad Cooper. Everywhere he goes he spreads chaos and death. Matthew Lillard plays a high school principal, William Hastings, who was having an affair with a librarian while they investigated “the Zone”. Bad Cooper arranges for Hastings to be framed for the librarian’s death, then kills Hasting’s wife with her lover’s gun just because. He arranges for the murder of people with whom he’s completed his use just because. Where Dale/Dougie is a force of good, Bad Cooper is a force for evil. The film would be less interesting if it were just those two forces against each other, though. The two never actually meet. Instead they influence the world around them in different ways, essentially moving pieces on a board in a chess game that Bad Cooper seems well aware of while Dougie barely knows how to get out of a car. 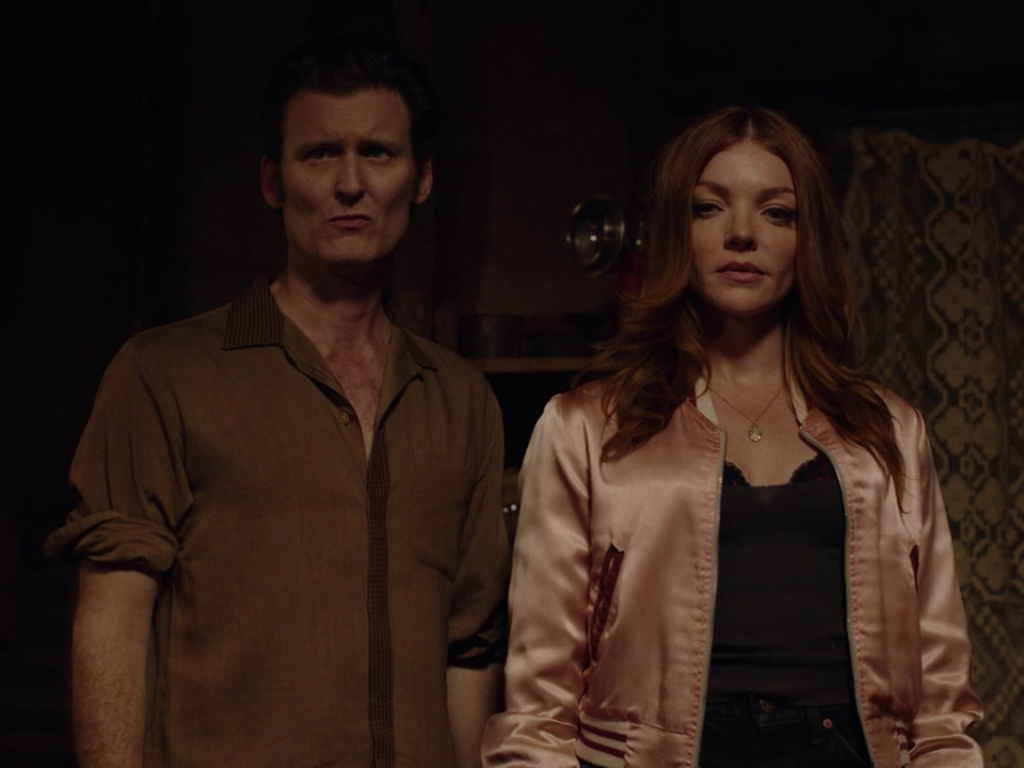 Through the film’s first sixteen and a half parts, I found the action easy to understand. There was a lot going on in a lot of different places with a lot of different characters, but it was easy to imagine everything coming together in the end. The exception to the flow of action was Part 8 where Lynch sidesteps the entire story to give an origin story for the evil haunting this world of Twin Peaks. After a few minutes showing the weird way Bad Cooper returns to life through the help of the otherworldly Woodsmen, the action jumps back in time to 1945 and the explosion of the first nuclear bomb in New Mexico. Told in a purely cinematic mode with no dialogue and only image and sound, we watch the explosion from afar, zoom in steadily, and see the explosive force from the inside. We see the oft-mentioned convenience store suddenly come alive with the presence of the Woodsmen in a violent and scratchy manner. In response to this, we see inside the White Lodge for the first time where the Fireman creates the seed that will become Lauran Palmer and sends it to earth in response. We jump ahead a few years when the Woodsmen reveal themselves to the world and the seed becomes a frog-moth creature that finds Laura’s mother Sarah and crawls into her sleeping mouth. Now, it took me a few minutes to write this but it takes the film about 45 minutes to show, and it was glorious. I loved every second of it. My wife, however, hated every second of it, preferring the idea of a two-minute literal explanation rather than an extended cinematic treatment of the idea that conveys as much a feeling, probably more so, than just another piece of the overall mythos puzzle of Twin Peaks. 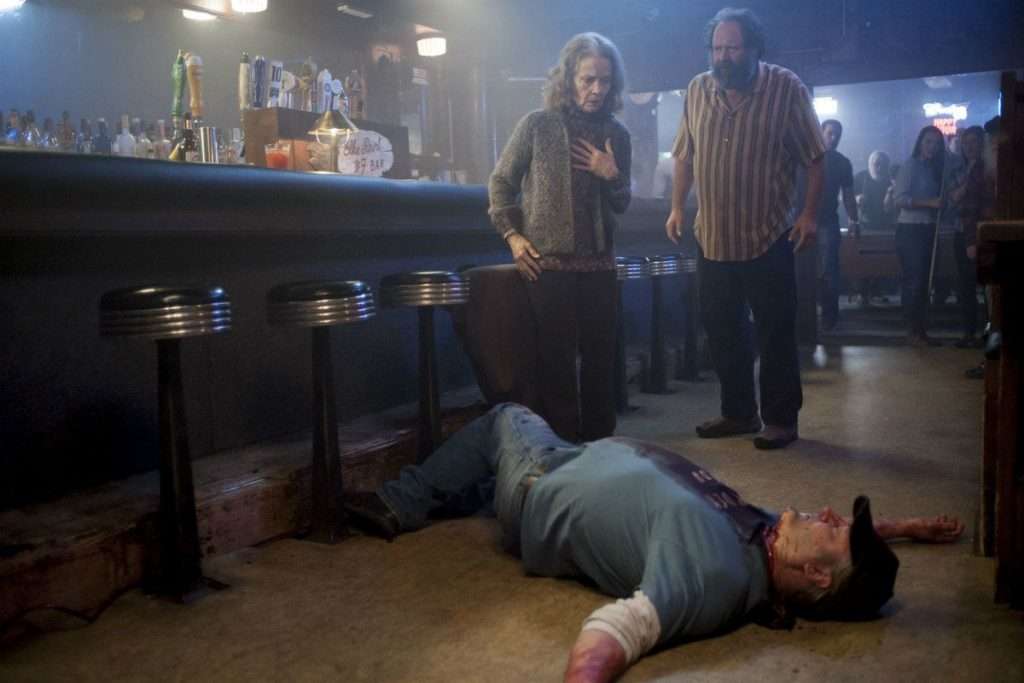 And then we get to final part and a half, and the film moves beyond the basic story we’ve been following, and it makes no effort to hold the audience’s hand along the way. Cooper, fully awake in Dougie’s place, takes the old key from the Great Northern Hotel and passes through a door, leaving behind Diane, his old assistant, and Gordon Cole. He gets transported back in time to the events of Fire Walk With Me where he rescues Laura Palmer from her fate, but she vanishes as he leads her through the forest, and we cut back to the present day to see Sarah Palmer still anguishing over her daughter’s death, even more so in that moment. He then finds himself back in the modern period, without Laura, facing Diane again, and they must travel 430 miles until they will go…somewhere else. That somewhere else is never explicitly explained. After they have sex for murky reasons, Diane disappears, and Dale finds himself in Odessa where he finds a woman who looks like Laura Palmer whom he takes all the way up to Twin Peaks and everything is wrong, including the fact that Laura’s old house is owned by some strange woman who’s never heard of Sarah Palmer. 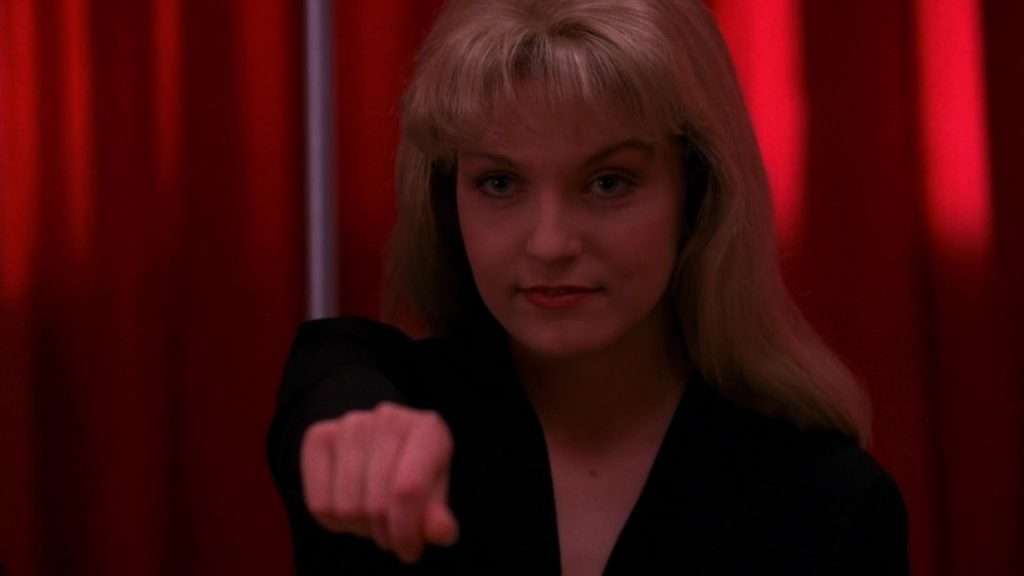 Now, the thing about Lynch is that focusing on the literal is often a mistake. There’s a clear emotional connection he’s trying to make through his abstractions, so the ending, despite its complete lack of real context, ends up working and doing what it’s supposed to do. Bad Cooper is gone. BOB has been punched into oblivion by an English kid with a gardening glove permanently attached to his hand. And yet what do we want? We want these weird powers to make Laura alright, but Dale can’t save her. It seems like he can change some of the circumstances of her death, but he can’t prevent it. When Dale and Diane pass into the other place (our world instead of the “world” of Twin Peaks?) and they find the woman who looks like Laura, she’s not Laura, then who is he trying to save? We had our elation at watching BOB finally die, but we can still feel a certain emptiness because Laura, the good girl abused endlessly by her father possessed by BOB, is still dead, and Dale should do something shouldn’t he? 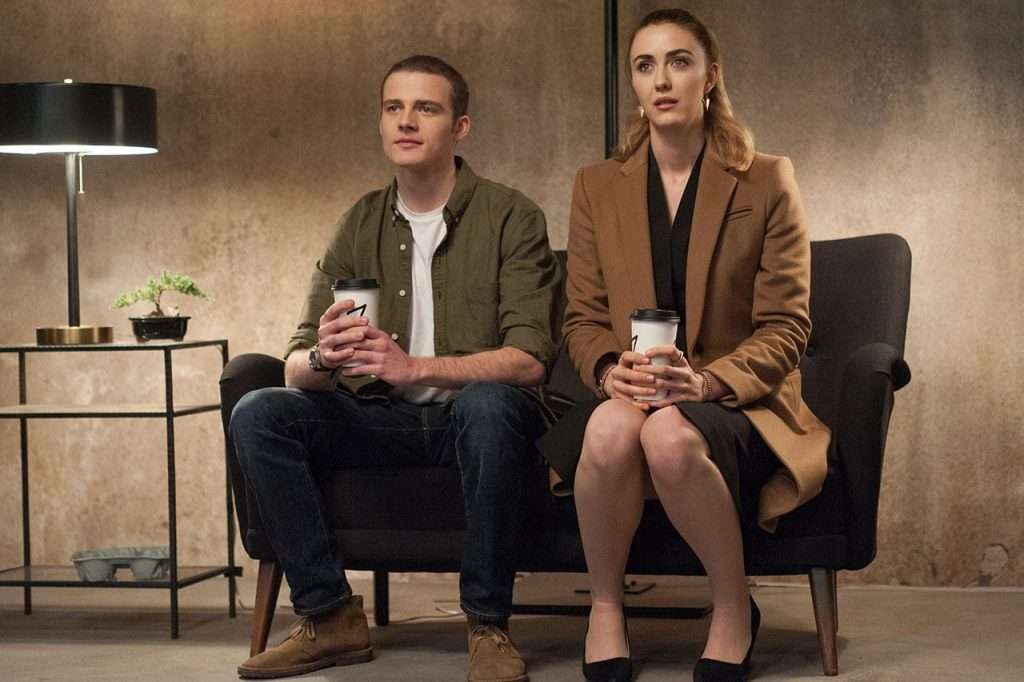 The movie ends with no real answers to these questions, leaving a lot up to the audience to sift through, and I really appreciate that. It’s packaged densely in the final hour and a half with little explanation, but I think the emotion is clear. I’ve heard and read more interpretations of the ending that go in depth about the presence of Judy, the Palmer house being the center of evil, and more, but that kind of exploration of mythos isn’t what really draws me to this story.

This feels like a capstone, perhaps the more traditional form of the word masterpiece. It is the work of a master that sums up his body of work at the same time that it stands alone. The culmination of Twin Peaks and Lynch’s film work, The Return is a gloriously entertaining extended adventure that looks at the idea of loss and comes away sad. It examines evil full on and makes us uncomfortable. It embraces warm humanity and fills us with joy. It’s a massive, complex work that I look forward to revisiting at some point in the future.

And one final note: Albert is the best.