David Lynch is a fascinating filmmaker. Talented in more traditional ways, he chooses to mainly exist in a more abstract plane of narrative filmmaking than most. Two of his films (The Elephant Man and The Straight Story) are as normal as anything any other independent filmmaker could make, but his body of work is dominated by the abstract.

Formed in the 50s and 60s, he’s concerned heavily with nuclear power, industrialization, and Transcendental Meditation. He’s also a family man with worries at that level. Through his abstract approach to storytelling, he combines all of his obsessions into coherent stories that go against the grain of popular cinematic grammar, but they do maintain concrete ideas at their core. These are generally not films for mass consumption simply because of how different they are made, but for those willing to make the leap into a different kind of storytelling, there’s a lot to enjoy.

The following begins my  definitive ranking of his films, starting at number eleven. 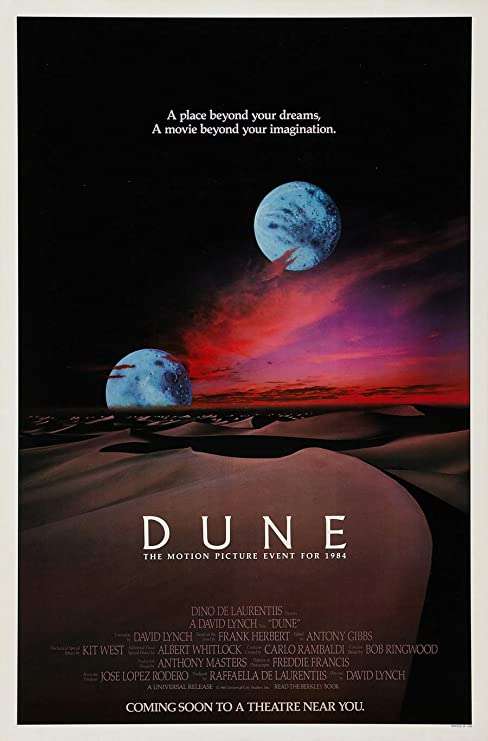 #11 in my definitive ranking of David Lynch’s films.

I hold David Lynch’s Dune up as the perfect example of an adaptation done wrong. It’s too concerned with capturing moments from the book to actually tell a story, and it even misses the basic point of the book on top of all that. If you’re going to hire a surrealist to interpret Frank Herbert’s Dune, you don’t hamstring him at the script stage. You give him the money and watch to see what comes out. If you don’t want to take that risk, then don’t hire him. Keep the project on hold for a couple of years while Ridley Scott makes Blade Runner.

The first half or so of the movie, though, is relatively coherent. Beset by an overabundance of voice over from Princess Irulan’s opening monologue (that actually contains information that gets repeated twice) to little snippets from those in frame (most of which are unnecessary and captured by the performance but seem to be there in order to bring more of Herbert’s work literally to the screen), we see as the House Atreides, led by Duke Leto, is moving from their home world of Caladan to the hellish desert planet Arrakis, the sole source in the known universe of mélange, Spice, from which all interstellar travel, life extension, mind expansion are derived. It’s a hard, but well paying job that is displacing the House Harkonnen, the Atreides long time antagonist. This is all a plot by the Emperor of the Known Universe to allow Harkonnen to kill Duke Leto as Leto is becoming too popular in the Universe’s Landsraad, it’s parliament of sorts. And none of these people are the main character. 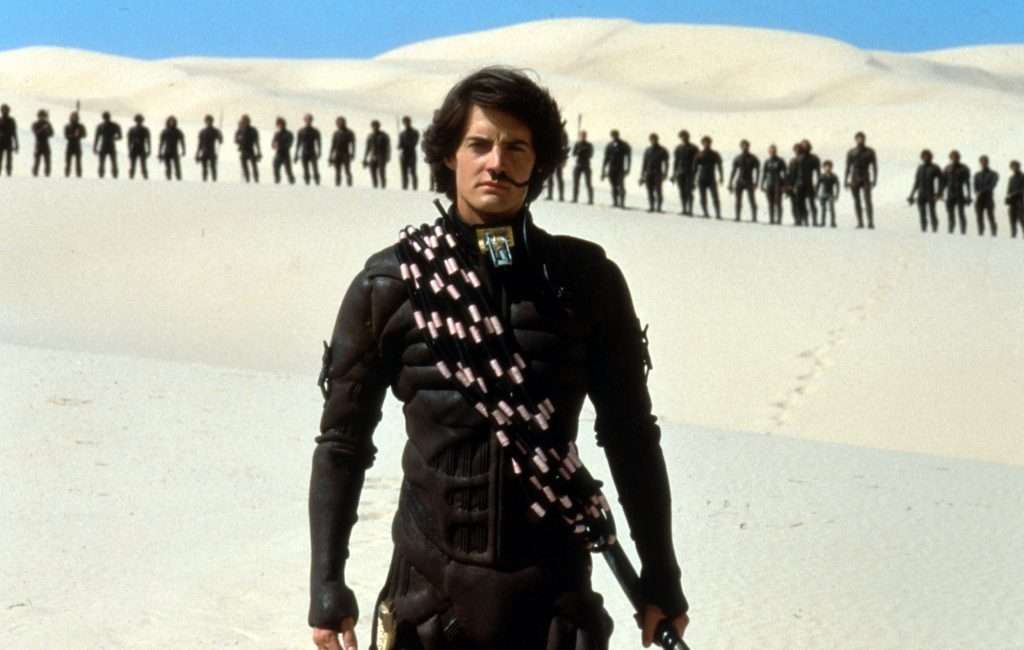 You can tell, if you’ve never read the book or seen the movie, that this is a massively dense story with a lot of politics going on, and I haven’t gotten to the ecology of the planet, the weird religious and magical cult of women called the Bene Gesserit, and the natives of Arrakis, the Fremen. There’s a lot in this story, and Lynch (probably at least partially at the behest of his producer, Dino de Laurentiis) went about the exact wrong way to capture all of this.

Every story is about a single thing at its core, and the story if Dune is about Paul Atreides, son of the Duke, and his journey from boyhood to manhood to leader to godhead. It’s not really about the squabbling of futuristic feudal lords or breeding programs or even giant sandworms that people ride. It’s about a single man’s journey to being worshiped by his followers despite being just a man. That is what you have to capture first and foremost. Everything else is just detail draped on that story. The problem with that approach to adaptation is that you’ll end up pissing off fans of the book who aren’t getting their favorite scene or part, but you’d be adapting the story for the medium while retaining the story’s thematic core and main characters. 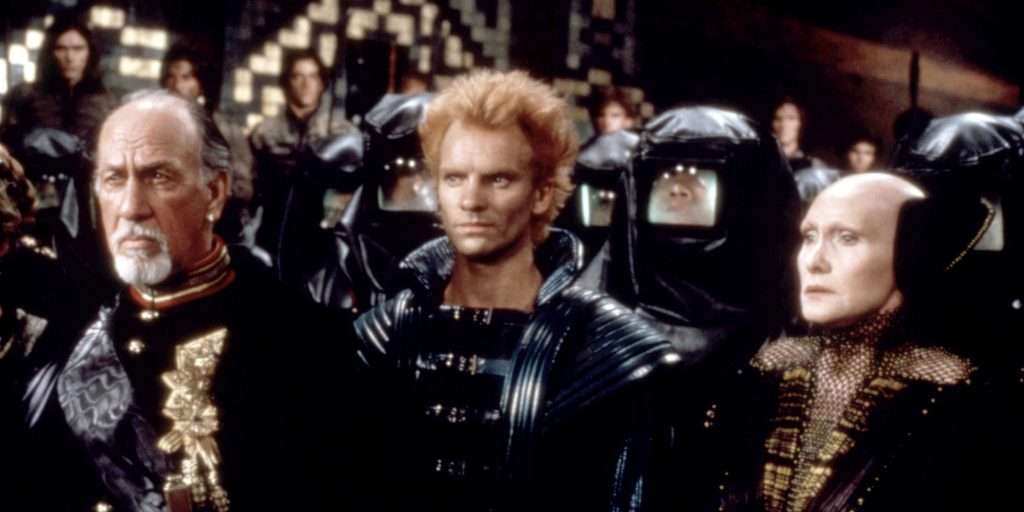 By taking the opposite approach, of trying to stuff as much from the book as humanely possible in to a grand two hour and seventeen minute runtime, absolutely nothing gets the kind of attention it needs to grow and feel natural narratively. However, everything does work best (not particularly well, but best for this film) in the first half.

We see the pieces being laid out for the coming end of the first half as people explain things to each other, who everyone is, why everyone hates each other, and what’s going to happen. It’s kind of dull, but it works. Everything falls apart at the midway point and the attack on the Arrakeen Palace. All of the pieces have been introduced awkwardly, but they’ve been introduced. When everything starts smashing together, though, we have no emotional involvement and the pieces so tenuously introduced while the actual action is so incoherently pieced together that it’s hard to tell what exactly is happening. For instance, the Baron Harkonnen literally just shows up in the palace in the middle of a large fight between two armies. Doctor Yueh betrays his Duke based on a couple of lines about his wife. It’s also incoherently cut together on a simple technical level because it’s trying to cover so much action in such a short amount of time. Then it gets even worse. By the time Paul and his mother Jessica escape the Harkonnens into the desert, an hour and fifteen minutes have progressed with less than an hour of running time left in the film. From this point four new important characters get introduced, Chani, Stilgar, Alia, and Reverend Mother Ramallo. Stilgar becomes Paul’s main companion within the Fremen culture. Chani is his love interest. Alia is his sister. Ramallo is the catalyst for making Jessica a full Reverend Mother of the Bene Gesserit. This is a lot of stuff to shove into less than the second half of the film, and it’s all competing with plot mechanics including some dense and poorly explained stuff around the Baron Harkonnen’s efforts to set his nephew Feyd up as the savior of Arrakis from his other nephew The Beast Rabban (partially covered in a single line of dialogue), the Emperor needing to micromanage the situation on Arrakis because Paul is leading a revolt on the planet that is halting Spice production while the Spacing Guild is threatening the Emperor because of the situation, and Paul needs to become a full Fremen by raising an army with the Weirding Modules (one of the only designs I don’t really like in the film) and riding the Sandworm for the first time. Oh, and of course there is a giant battle.

I have no idea how anyone who isn’t already intimately familiar with the source book could make heads or tails of this. It’s so dense, thin, and underexplained that it becomes a highlight reel of events from the book instead of an actual telling of a story. It’s incomprehensible.

Oh, and they completely miss the point of the book. I don’t usually harp on things missing the points of source material (the source material is always there, preserved, without the adaptation), but just to pile on with the movie’s sins, I might as well note this. Paul should not be able to make it rain by his will alone on Arrakis. The point isn’t that Paul becomes a god, but that he uses force, fear, and violence to supplant one system of power with another where the main change is that he’s on top. Having him make it rain just ends up as one more incoherent choice at the end of a series of incoherent choices.

Now, having savaged this film from a narrative point of view, let me talk about what I do actually like. The designs of this film are kind of amazing. The sets are huge, ornate, and simply fun to look at. The technology takes a similar approach as Terry Gilliam did in Brazil where Lynch used modern and old technology in new and interesting ways to represent the future (my favorite being the light that shines in Thufir Hawat’s face that’s supposed to relay computer information that he can instantly decode as a living computer, essentially). In addition, Lynch is really good with actors and pulled together an amazing cast here, so while characters may be short changed endlessly because of the movie’s narrative incoherence, when individual actors are on the screen they do well.

Lynch was the wrong director for a literal minded adaptation. De Laurentiis was the wrong producer for such a large undertaking since he wanted such a short end product. Adapting the entire book was the wrong decision for a two hour film. The film’s not worthless, but it’s so thoroughly broken on so many story levels that it’s closer to a train wreck than a piece of narrative filmmaking.