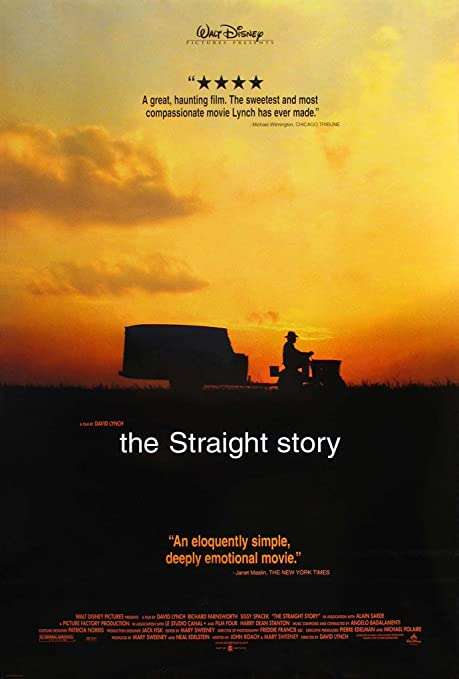 #1 in my definitive ranking of David Lynch’s films

This is the black sheep of David Lynch’s filmography. Even Dune doesn’t stick out as much as this because that still feels distinctly Lynchian in all of its deeply flawed glory. There’s a single sequence that feels like the work of the man who made Eraserhead and Lost Highway, and it’s integrated so well into the quiet tale of an old man on one final trip to visit his dying brother that it never sticks out. This feels like, to a certain degree, Lynch’s The Age of Innocence, a movie that feels out of his wheelhouse but he demonstrates he can handle with extreme tact and skill. It might also be my favorite movie he’s made. 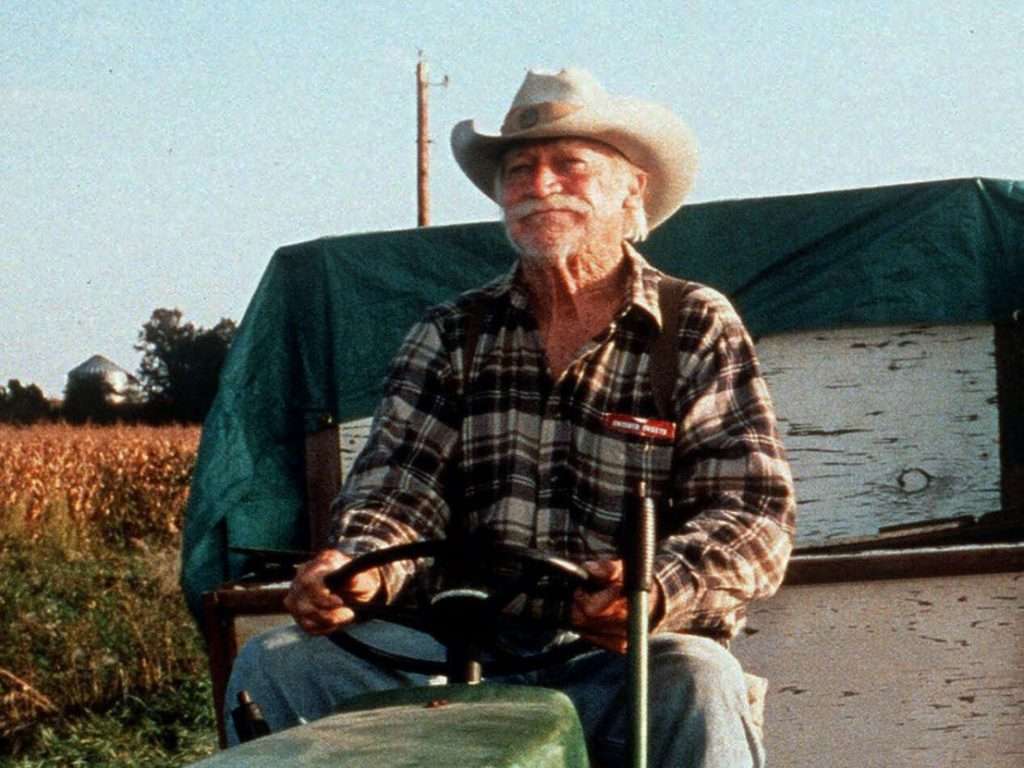 Based on the real story of Alvin Straight who drove more than two hundred miles from Iowa to Wisconsin to visit his estranged brother on a lawnmower the entire way, taking about six weeks to make the journey. Portrayed by Richard Farnsworth, Alvin is a well of experience and deep feeling, barely able to walk, blind enough to fail any driving test, and angry for ten years over an argument with his brother Lyle (the real brother’s name was Henry) that he can’t remember the specifics of. When he receives word that Lyle has suffered a stroke, Henry decides that the only thing he can do is go, and he has to go on his own. He hitches a trailer up to his old red lawnmower which breaks down a few miles out of town, and he’s forced to buy a newer John Deere in order to make the trip.

This is a road movie, and it’s interesting how it’s structured. The people he meets get progressively older as he goes. The first is a young girl running away from home because she’s secretly pregnant. Using some homespun wisdom about family, he convinces her to go back home. He encounters a group of cyclists as they zoom past him on the road. Meeting up with them at their camp later, they cheer him for arriving and he tells them that worst part of growing old is remember being young. He witnesses a women driving alone who rams straight into a deer. She is beyond distraught because she runs into one a week, killing them all, and she loves deer. Alvin takes the deer, cooks it, and mounts the antlers on his trailer.

This being a road picture, all of these seemingly unrelated events tie intimately to Alvin himself, the main character. As he goes, interacting with these people, we can sense the deep regret hiding just under the surface as he talks about family, youth, and uncontrollable events. Most of the time, though, he’s chugging along on the side of the road, alone, and when his transmission fails down a hill and he nearly crashes into a burning building being used for firefighter practice. This small sequence is where the movie is most traditionally Lynchian with a montage of fire dominating the screen while Alvin struggles to control his lawnmower and the soundtrack dominates with sounds of burning. This isn’t just a sequence to by flashy in a largely unflashy movie, this is Alvin facing his mortality and the potential of Hell that could await him.

It’s no coincidence that he ends up truly opening up shortly after. 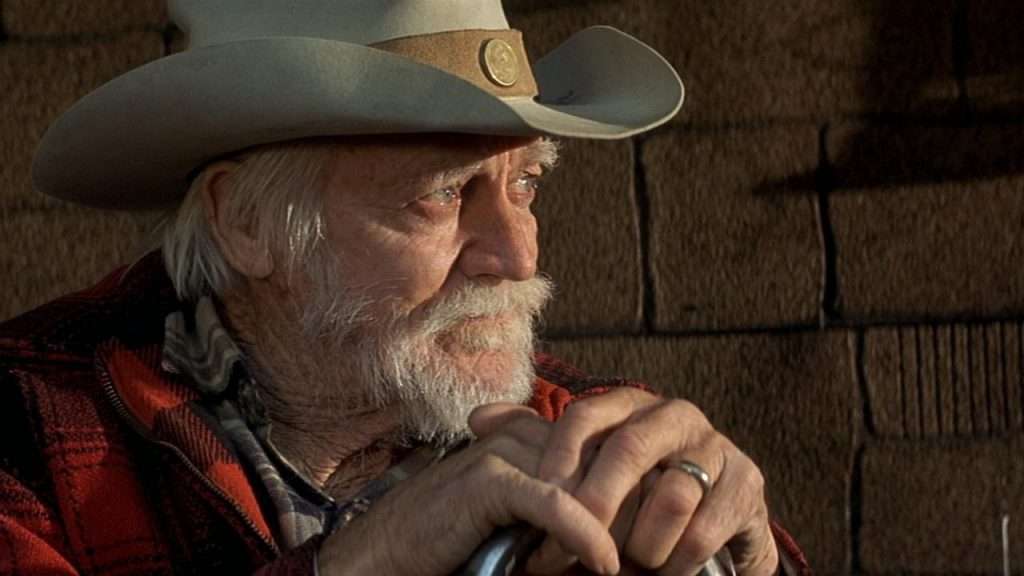 Having to wait a little while for mechanics to come out and fix his transmission, Alvin camps out in a friendly couple’s back yard, refusing to go inside for any reason, even when he needs to use the phone to call his daughter (Sissy Spacek, wife to this film’s production designer Jack Fisk who helped finance Eraserhead) to get his social security checks forwarded to him. He spends an afternoon at a bar (drinking only milk since he’s sworn off alcohol) with another man his age, and they end up swapping war stories. The other man tells of the German bomb that cooked all of his buddies alive. Alvin talks about his time as a sniper and how he shot one of his buddies in the middle of the night thinking he was an incoming German scout, everyone assuming the next day that he had been killed by a German bullet. It’s here where Farnsworth moves beyond a kindly old man to showing the audience the depth of his feelings. It’s not some random event from Straight’s past to bring up. It’s about another event in a long life that Straight regrets, a life full of such events including his fight with his brother. 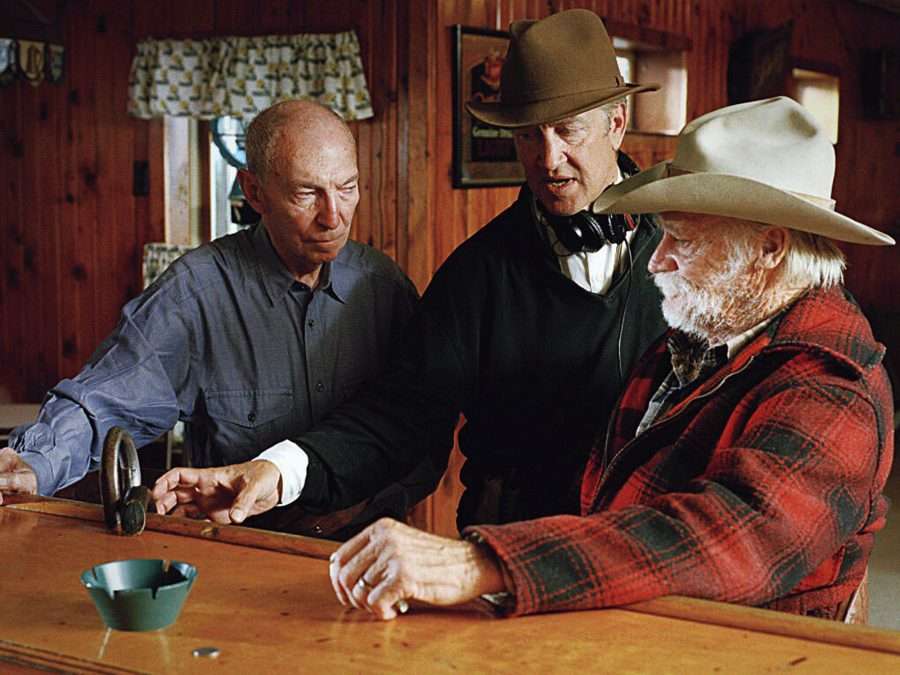 When he eventually gets back on the road (including another wonderful scene where he negotiates adeptly with a pair of twin mechanics and gets them to re-evaluate their cantankerous relationship), Alvin makes the final leg of his journey. He stops at a bar a few miles from Lyle’s house and has his first alcohol in decades (a Coors Light) in an effort at liquid courage only to break down a couple of miles from Lyle’s house. All that way, just for the black smoke to suddenly pop out of his engine and leave him dead on the road.

When Alvin does make it to Lyle’s house, the brothers have little to say to each other, but they still manage to communicate through what little they say. Lyle inviting Alvin to sit despite the decade of antagonism behind them is one thing, but when he asks Alvin if he had driven the whole way on that lawnmower, Alvin’s insistence on doing it himself makes complete sense.

Alvin Straight, the character, was a man who had lived a very long time and seen a lot of things. His long journey across the Midwest, including the kinds of loving natural inserts that could be found in a Malick film but are also flip sides of Lynch’s earlier evocations of industrialization in other movies, is Alvin finding some kind of closure the things he’s lost and done that he regrets, finding a way to salvage what he can in the little time he has left. Anchored by Farnsworth’s marvelous central performance with wonderful smaller performances from a wide ranging cast, Lynch deftly directs this slice of Americana with simplicity and remarkable skill. Thematically, the movie fits with Lynch’s body of work, though it’s a rather dramatic stylistic removal. However, despite some of the very real highs that Lynch has found in going the non-traditional route, I have a sneaking suspicion that this might be my favorite film he ever made.