Continuing with the crowdfunded related reviews this week, I’m going to discuss Richard C. Meyer’s (Ya Boi Zack) newest release. It’s a follow up to his first, Iron Sights! And let me cut to the chase. I thought it was lukewarm, and overall I felt it was a bit of a disappointment. I didn’t hate it, but it kind of felt like Zack didn’t have a full on plan here.

It’s been two years since the events of the first Iron Sights and Ramadi, the main surviving character from that book, has been working as an enforcer for Esme (the lady he threw his life away to save) and…Esme comes off as a completely different character but we only get just as many appearances with her here as we did in the first book…aka Not that much! And Ramadi is starting to crack and is becoming useless to her. 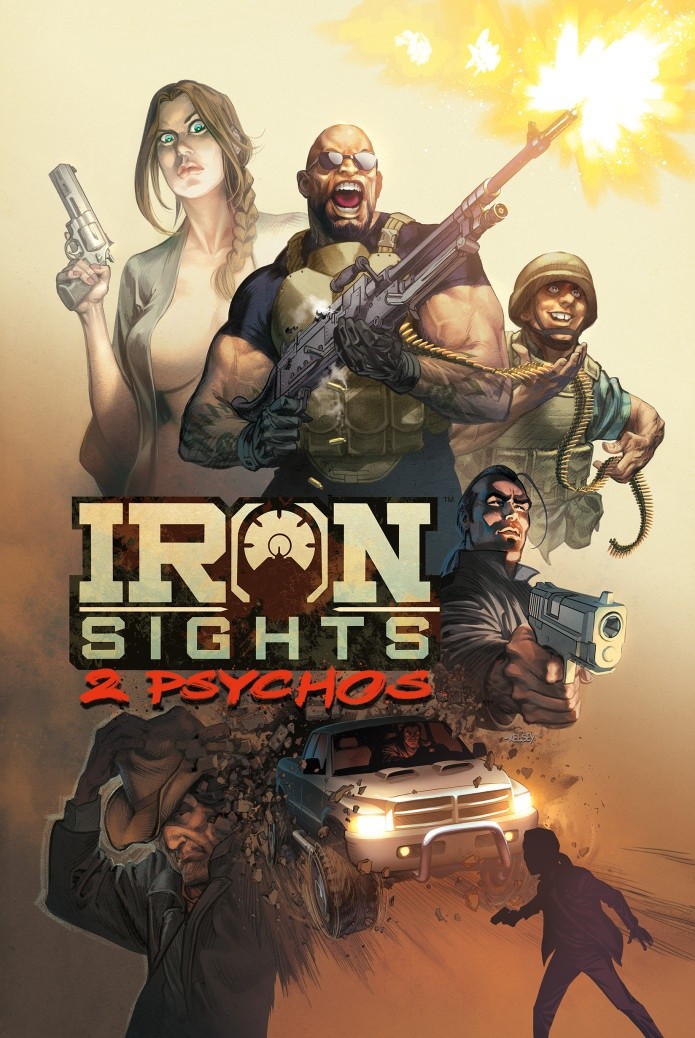 Then we’re introduced to Harm, a deep cover operative recruited by Woods, from the first book, and has been stuck undercover due to Woods’s death. He will become our main character for this book. He also has a history with Ramadi and is apparently the reason he had such issues in the first book.

We’re also introduced to Ernie and Griselda who end up on the run after Ernie uploads an expose on the Mexican cartel and it immediately gets them in hot water. Then there’s Diego, another one of Esme’s enforcers who seems to be questioning his life and is depressed or something? We don’t get much about him despite what he does later. Then there’s Mel, a tourist who suffers from Schizophrenia, and yet he knows Ramadi very well. We also get some feds and…you see the problem here?

So many characters thrown in at us and things just go all over the map. With the first book, we had Ramadi, Woods, Conway, Ramadi’s sister, and a few others. But things were kept very clear who they were, how they connected, and we could follow them from point to point. Not only that but a lot of plot points are very much glossed over, again different from the first book where, while there were still lingering questions, what we had was satisfying. Character motivations aren’t made clear and…well..

Ramadi gets killed off in a VERY Undignified, out of nowhere way and is completely forgotten about the rest of the book. It felt like Rich didn’t know what to do with him or a lot of the other plots he set up so he decided to introduce Harm and throw things into the air and figure things out from there. Because, like I said, this book was all over the place, borderline on a mess.

That’s NOT to say, as I said before, it was all bad! I’d give it a 6 out of 10 if I had to rate it, and I don’t regret getting it…but it was not what I expected…and what I expected was better. If he does another book I’ll still back it but I hope he learns from his mistakes.