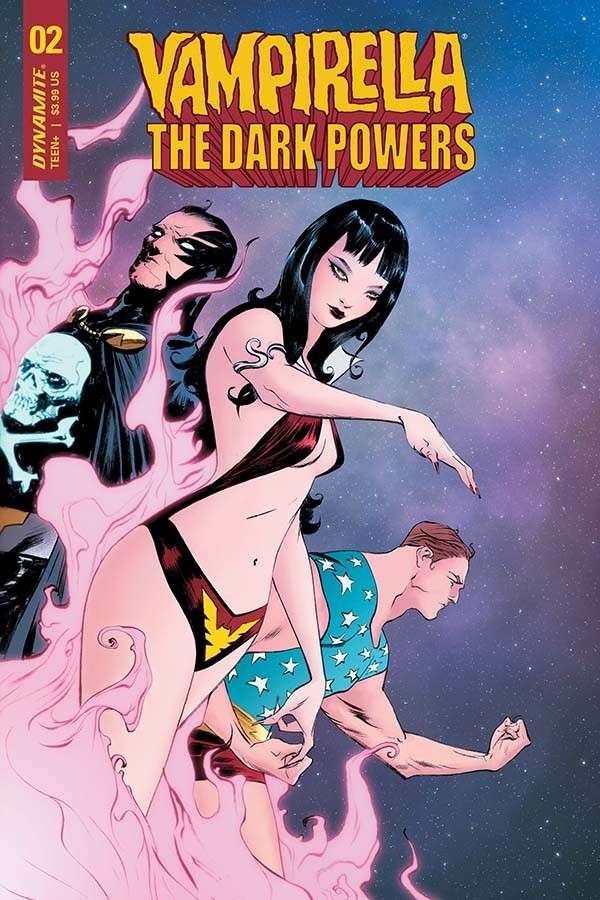 Vampirella is getting it from all sides in this issue. From the battlefield of Super heroics to the politics of The Project, our girl is having a rough time.

This issue picks up right where the previous left off right in the thick of the action and the reader gets a look at Vampirella in action. As stated in the previous review  Vampirella attacks with deadly intent and it’s a bloody sequence. The consistency with her character though from the fights to the Project HQ is great. In this issue, the difference between Vampirella and the heroes is further cemented and Abnet gives us a look at Vampirella’s more human side. The feeling of not belonging is on full display and despite the fantastical elements. It makes it all incredibly relatable.

This depiction of her also creates a strong contrast to who we see in the first issue. First, we saw her brutal and deadly side and now we see her more vulnerable side. Not too vulnerable though as she still has her guard up. The story is still taking place in this world of fantastical adventure and Vampirella is anything but human, but she is so human in her doubts and reaction to the people around her that you can’t help but feel where she is coming from.

On the side of the actual Project, we’re getting some real lore expansion. When it comes to the Project, we haven’t been given much information, except the bare bones of the organization. The reader is taken headfirst into the deep end in this issue as they introduce more members, the HQ, and who these heroes of plural worlds answer to. This is truly a massive world and sets up more to come.

With Vampirella at the lead of this title, it’s focused on her and her personality stand out and gives the reader someone to cling to in the second issue, but the real interest really comes from The Project and keeps the interest going. A good sign for the future of this title is clearly this world is alive and has many possibilities. It’s going places and It’s worth it to see where it goes.