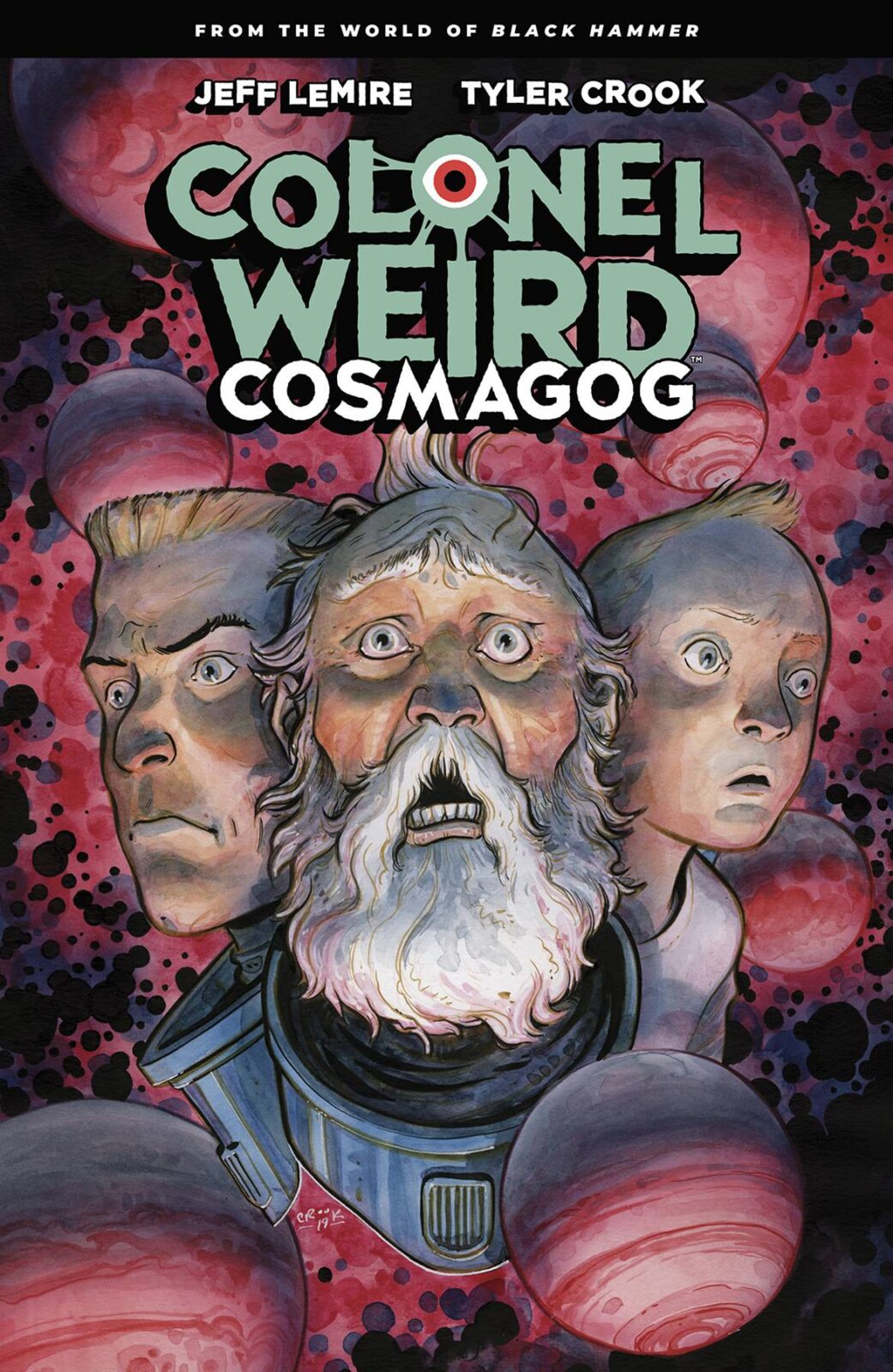 Anyone familiar with Jeff Lemire’s work knows that he wastes no time in throwing you into the deep end of a story or his world. And Colonel Weird Cosmagog #1 is no exception. We’re teleported onto a dirt road with Colonel Weird, an old man in a spacesuit. The Colonel is confused, the reader is confused, but we’re on the ride now so there is no turning back. Two questions are raised; where are we and when are we?

The colonel remembers some friends in a brief flashback, but they lack detail in looks, and the Colonel’s words that they went home tell us they’re gone. The issue progresses with the Colonel making his way to a gas station where he becomes a child and interacts with the clerk. It’s clearly in an old-time America since a soda pop only costs a nickel and bread and milk is 20 cents, Great! we know when we are. One page later I’m looking at a skull-faced cosmic entity in a storm of planets and the Colonel is transported to a fight between heroes in a destroyed city facing a giant monster.

Now I’m back to confused, but my interest is piqued. The heroes appear to be his friends from the flashback. The Colonel is still with us by saying that he has no idea what’s happening. The issue progresses in this manner. We jump through memories of heroes, space adventure, cosmic horror, and a cult. And what story featuring seemingly cosmic beings is complete without a cult? All the while on his ride of memories jumbled together, slowly telling us a story of who this man is (without ever actually telling us who he is). The issue concludes with him facing his various ages and realizing he’s forgotten something important and he needs to remember it. The issue ends starting back at the beginning for him, a child in 1946. 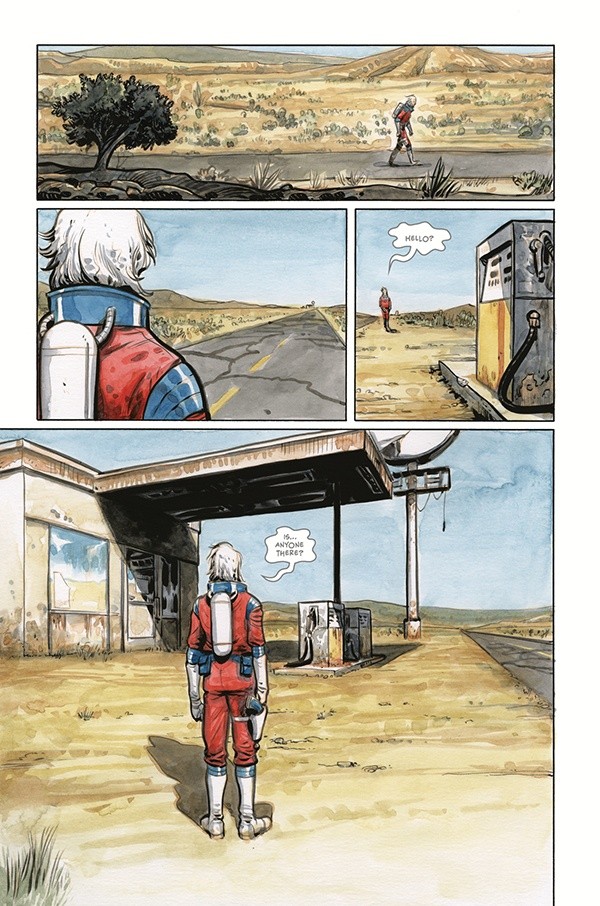 The art by Tyler Crook in this is amazing. His attention to detail with the Colonel’s character design is fantastic. The Colonel’s wide-eyed gaze comes off as unhinged. As I saw the things he has seen, I began to understood that he isn’t unhinged. He has seen some crazy stuff and his eyes tell say that. His spacesuit and rocket ship is in the style of old pulp space adventurers and the way he presents the entities gives us a great scale and impression of this world, despite not knowing the details.

Jeff Lemire’s writing, as usual, was very good. He manages to keep the reader and character on the same page the entire time. When something confusing happens, the Colonel voices it and it felt like it gave form to my own thoughts of confusion. Beyond the first page, there are no thought boxes so the issue flows smoothly. Each panel is clutter-free because we all know there can be too many words per panel. Jeff demonstrates his word economy very well here. This issue is definitely more at than words, for the best. Could it be a side effect of his lost memories, or is he just a man of action? The pulp style of his suit and ship is clearly a nod to older adventure series from the ’70s in which the main characters were daring men of action. It does concern me that this is only a 4 issue mini-series, and this seems like a story that would take more than four issues to tell, given we are going through four ages of the colonel – not including this one. 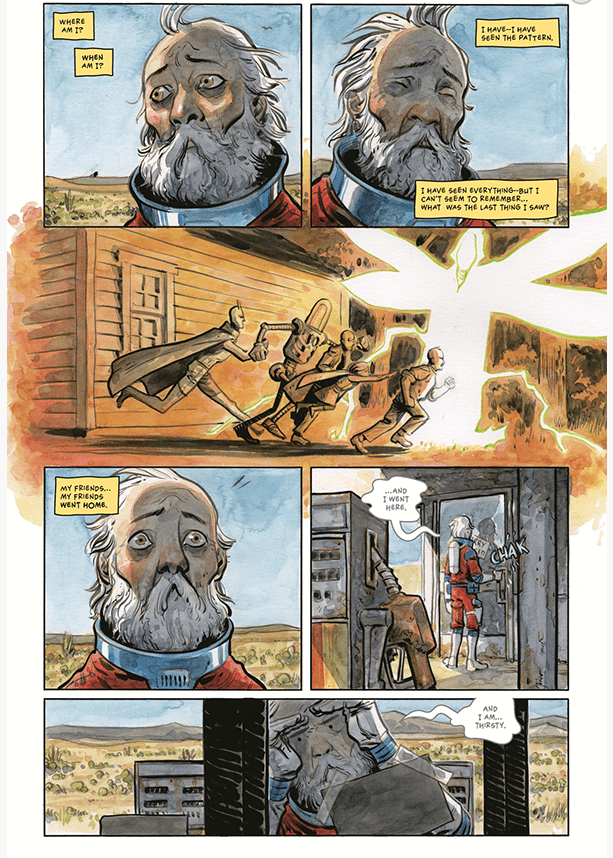 Do you need to know about the Hammerverse?

When it comes to titles in a publisher’s shared universe, it helps but isn’t always necessary to know of the greater universe it exists in. I can safely say that after this issue I didn’t need to know about the Hammerverse to enjoy and understand this and you won’t either. If you’d like to find out bout the definitive guide to Black Hammer you can read fellow Bleeding Fool contributor Jamison Ashley’s recommendation here