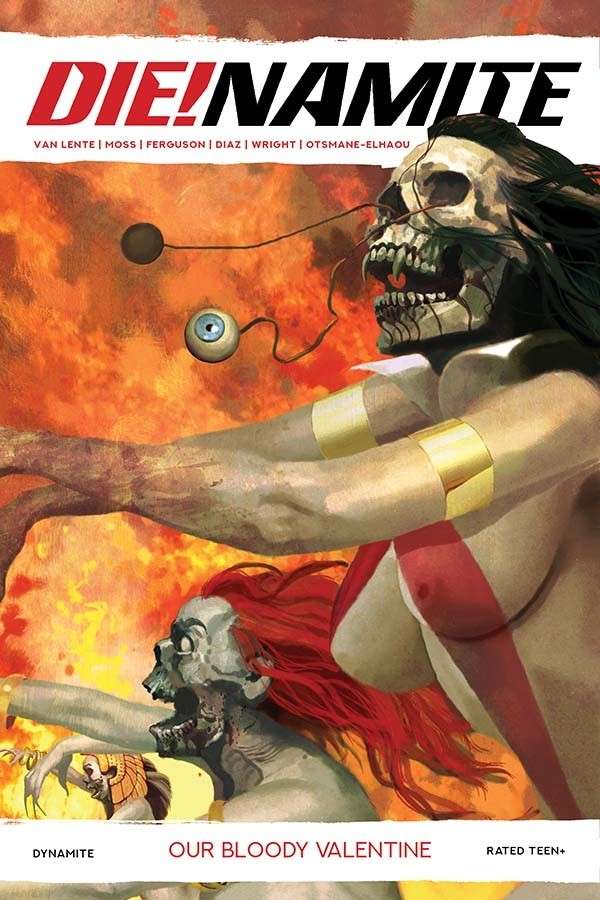 In this Valentine’s issue of DIE!nimite we are given two stories of love in the midst of death. On one side, there is the love struck peter. Trained by monks to be a human weapon peter finds himself dumbstruck by the beautiful Sonja as hordes of undead surround them. Alongside them is the zombified John carter and his equally as zombified girlfriend Dejah Thoris. Can These four make it work in a zombie apocalypse?

Written by Fred Van Lente with art by Drew Moss

This is the continuation of issue #1 of DIEnimite in which a group of heroes from across the multiverse makes a stand against the zombie apocalypse. It opens on the love-struck lead Peter contemplating an old lesson he received on what love is. This sets the narrative tone of the issue. To say love-struck though is an understatement. He has never really been around women like this before and his emotions are intense. This desire to be with Sonja takes him across the gathered heroes seeking advice and in some instances propositions. Some in regards to tricking and some sexual. Fred Van Lente captures that puppy love very well.

The confusion, loss of words, and general stammer of trying to talk to the person you like. The art is good, but there is nothing about it that makes it truly stand out or bring the story to higher or lower levels. However! this is one of those instances where an artist takes a character and puts their spin on them. With Vampirella and Sonja both taking on a slightly different appearance than other depictions running currently. Sonja stands out more though as her usual brave and hardened demeanor is changed to something softer. It’s a good reminder that not all artists view these characters the same.

Art by Lee Ferguson with colors by Ellie Wright

Every once in a while you’ll get a story so simple and sweet. it can’t help but bring a smile to your face. With no dialogue, it’s hard to convey what’s going on in a story, except in this case. Lee Ferguson and Ellie wright create a short, but engaging tale story. When you do a story like this though it means you have to go big on facial expressions, gesturing, and context. These two do it amazingly. Something here to note is how the presence of blood and light can impact a story’s mood. Yes, the main characters are zombies eating people, but there isn’t a lot of blood so the mood doesn’t feel gruesome and the colors are lighter so it doesn’t feel like horror. With this being a valentines story it makes perfect sense and also is a testament to Lee and Ellie’s ability to dictate a mood.

This issue is a good get for a Valentine’s Day read. The bonus is that if you like the first half then it can lead you to continue it or not. There isn’t really a pressure to need to know more than what is presented in this issue so you can take it is. The second half is just a sweet story. So, for the season of love, this is a nice read but won’t blow you away.