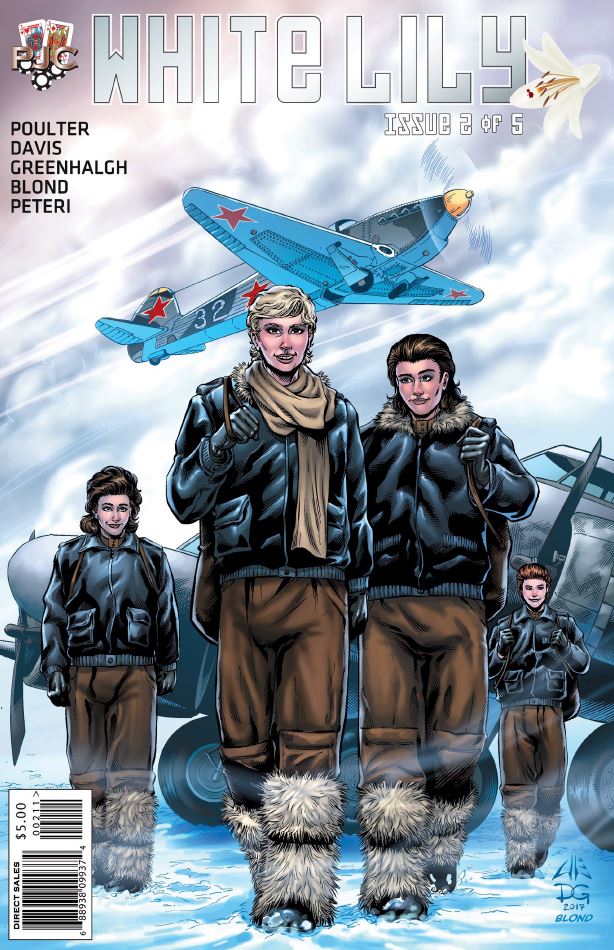 White Lily Issue #2 is written by Preston Poulter, with pencils by Lovalle Davis, and colors by Blond and is published by Pocket Jacks Comics. Presented as an empowering tale, White Lily tries to take the reader along the thrilling lives of Soviet fighter pilots during World War 2. Personally, I have a huge love for all things military, and I was genuinely interested in reviewing this book based on the description, but it took 3 pages for me to change my mind. If this was a good or a bad book doing a review on it would be easy work; but the problem with this book is that it is such an inconsistent mess that it makes either recommending it or just slogging through it a huge burden. 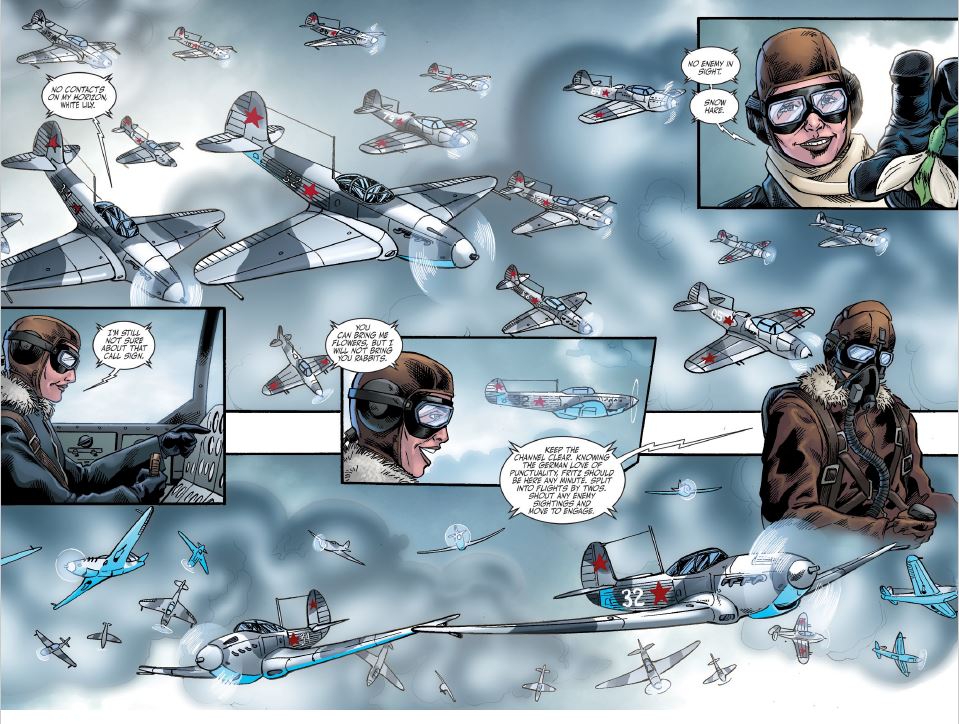 The opening panels depict what looks like a bar filled with uniformed men and women; the art itself is unique, the colors give you the impression that this is an older setting. Those first three panels set up the art work and the colors that should be expected throughout the rest of the book, the main problem is that it set the bar too high. The next page shows the first of many inconsistencies in both the art and the color; from one panel to the next the main character goes from blond hair to silver hair, back to blond. Her facial structure goes from traditionally sculptured female features to a more traditionally male structure, and back to the traditionally female features.

The story is a confusing wave of virtue signaling that takes the reader completely out of the story to figure out the message being portrayed. As hard as I tried to distance any political feelings from the story, it proved to be impossible to do so. Remember that this is supposed to be loosely based on the exploits of the first female ace fighter pilot in history; during the World War 2 Soviet era, I could imagine that women had a difficult time proving themselves as capable as their male counterparts. There is a lot of history that could be taken for this book, a look at the challenging atmosphere that female military members suffered would be more than enough to make this character a likable one. Instead, we get to see how our heroine steals a fellow woman’s date for a one-night stand. 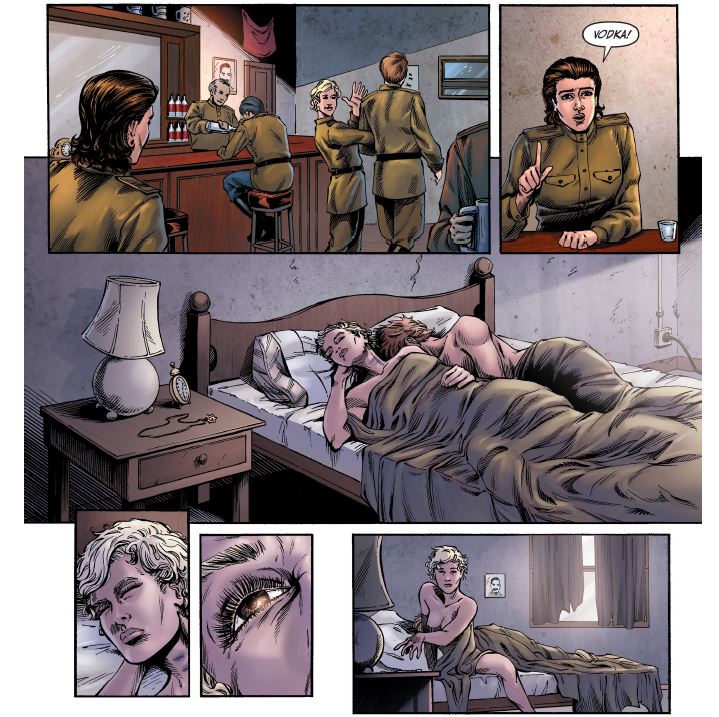 As we see her recovering her clothing to return to the barracks, we again see the inconsistency in the art, colors, and in the writing: how is portraying a woman who sleeps with her instructor in anyway empowering? The “slapfest” that follows further degrades any sort of charm that this character could have earned. This is until the artist and the colorist forget the character’s age, depicting her more like a haggard old woman in some panels and then reverting her to a woman in her prime in the next. I remember in the 90s culture, where all villains smoked cigarettes to show how evil they are, eventually that turned into making the good guys into smokers to subvert expectations. This book tries to do this as well, however by this point in the short story readers would have long abandoned the notion that we are witnessing an honorable character.

The dog fights are some of the best parts of this book, the action is shown in an easy to follow way in an otherwise chaotic structure. It’s sad to say the main thing that takes away from the action scenes are the character depictions that are necessary to show what character we are following. The second that any facial features are shown, the tension is immediately defused. Some of the best panels show a character with their facial features covered with equipment that would be expected in a combat fighter jet, the attention to detail there is superb. 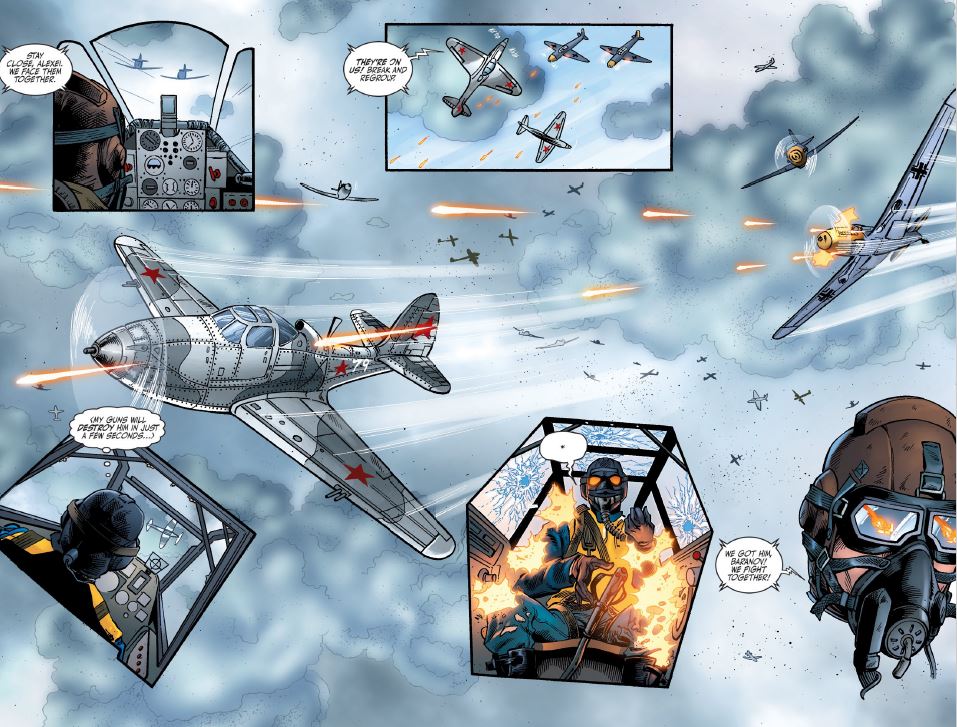 This is a short book, at just over 20 pages long and made through crowdfunding efforts in Kickstarter. For the price range, this is not a bad purchase, however I’m finding difficulty in recommending it. This book has a lot of great ideas, depicting a historical character in this medium is an excellent idea, however there’s just no clear direction as to where this book is going. If this is a biographical presentation, it’s failing at giving any sense of endearment toward the main character. If this is a smear job, it does too much to build the character as having flaws to properly depict her as a stain in history.

White Lily has been dedicated to Lovalle Davis, who tragically passed away after production in issue #2 was completed. This puts an incredible amount of pressure into the project, when the art was good it was superb, but when it was lacking there was no denying it. It’s the same with the colors, when they are good they stand among some of the projects created by the Big Two, but often it tends to stay in the midrange. Even the covers themselves show the incredible difference in the artistry, with the variant cover being far superior than the regular cover. I truly hope that this ship can be righted and that this becomes a worthy dedication to Mr. Davis; a lot of that pressure is now on the writing and colors. Perhaps try to make the challenges faced by women at this time and show how the characters are overcoming those struggles be center stage, instead of making a social-political commentary take front and center. 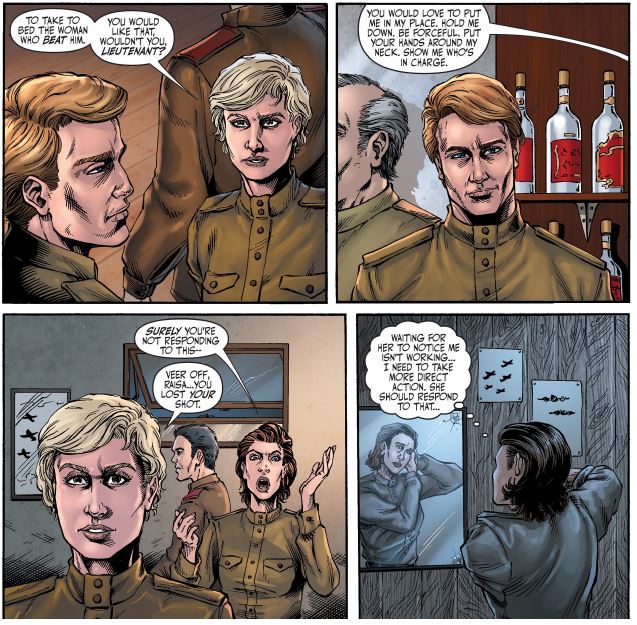 Are there heroes in military history with lose morals? Absolutely. Were there same sex couples even during those times? No doubt about it. Are there specific challenges faced by either gender in combat situations? Sure are. However, none of these challenges are depicted in the story, instead we get a bland, cut and paste narrative that completely takes any enjoyment out of the story. Like I said before, if this is a biographical piece intended to empower women in the military, it falls short of coming anywhere near that objective. If this was intended as a way to smear this historical figure, then it has done a great job at that. I hope that the writing will take a huge course correction in the remaining few issues because this is not the best way to portray such an important historical figure.

On a scale of 1-5, I give this book a 2. Unfortunately, there is no consistency in the writing, the art, or the colors; while a book could survive a shortage in one of those three, this book is plagued on all fronts. There is a great idea here, and a very good concept, but for issue #2, the idea may be too big to be carried out by this creative team. Keep an eye on Pocket Jacks Comics though. Check out some other titles they’re working on here.