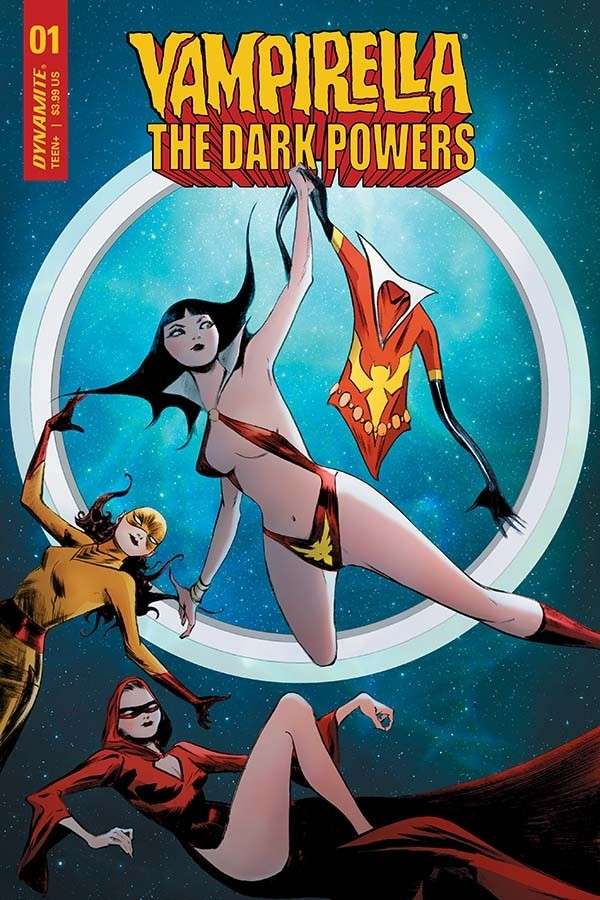 In this Dynamite crossover; project power recruits the bloody heroine Vampirella to handle threats only a team of superheroes can tackle. Project power is a team of heroes from different era’s in the comic book world. This being Vampirella’s first outing with them pits her up against a threat to the global banking system by Anticlan and their recruits. Vampirella isn’t a caped crusader giving hope to the people as she flies through the skies above saving them. She is the monster in the shadows keeping people safe from worse monsters. Her bloody methods of heroics don’t end well though.

Dan Abnett is writing this title, and seeing as he wrote a great run of Guardians of the Galaxy, we know he is no stranger to making a team of vastly different characters cohesive and fun to read about. With this team consisting of heroes spread across the ages of comicbook history the personalities couldn’t be more different. Dan is smart about this and chooses to even have one of the characters speak in the campy tone of the golden age. It’s not done in a mocking way though. It’s just who they are and it embraces the character and their era.

Paul Davidson takes on the art duties and he does a great job capturing the tonal shifts through this issue. When it’s bloody action he cranks of the details and line work to give a better impression of the action. Colorist; Andrew Dalhouse follows up with some fantastic coloring that draws in the eye and works with Davidson’s art to keep the tonal shifts consistent. Dan, Paul, and Andrew know how to bring the action to life. The comic opens with the action and it’s an immediate hook. When the moments are calmer and the plot moves forward the detail lessens. The faces and characters gain more detail though so the focus is clearly more on them.

Having familiarized myself with Vampirella since my previous review, I jumped into this title with a much better understanding of our lead Vampire. So as I read this, her violent actions didn’t surprise me. I was more intrigued as to how the other heroes would react to her though. That is why I’m not really a fan of the Earlier and Now split in this issue. Establishing the characters first then introducing the catalyst feels like it would’ve worked better. But, the action out the gate is a strong hook for a crossover title so it’s understandable.

The catalyst in this issue is a big one too. It takes the heroes from a high tech terrorist threat into high tech horror threat. It does it with a bloody bang too. Seeing how someone from the golden age of comics reacts to the violent horror of more contemporary titles is interesting to see. Vampirella is the focus though after the catalyst. She spends a lot of the issue wondering why she is on this team of heroes when she doesn’t see herself as a hero. Her reaction shows why she is on the team though. Yes, she is a monster and a killer. She also cares about people and wants to help. Her brand of help though comes with more blood though.

This has all the makings of an action-packed crossover team book. It takes the fun of picking characters out of an era and introduces them to bloody horror. So if bloody action with characters out of time is your cup of tea then I recommend that you give this a read. Dynamite’s Vampirella: The Dark Powers #1 arrives in local comic shops this week!