Comic Review: Not All Robots #2 the War Between Man & Machine Begins 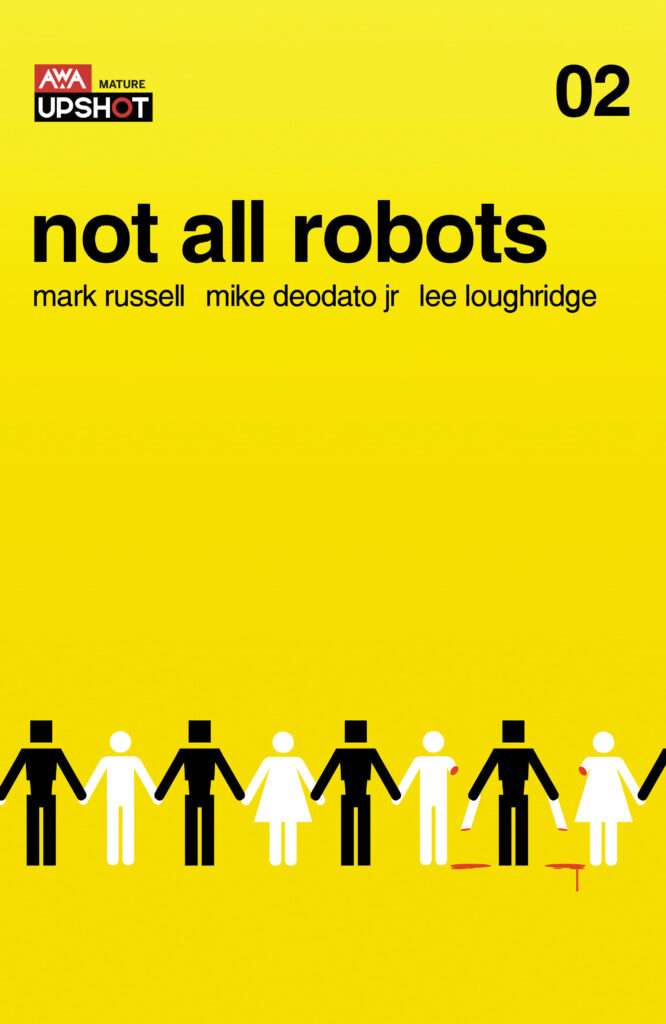 In the year 2056, robots have replaced human beings in the workforce. An uneasy co-existence develops between the newly intelligent robots and the ten billion humans living on Earth. Every human family is assigned a robot upon whom they are completely reliant. What could possibly go wrong? Meet the Walters, a human family whose robot, Razorball, ominously spends his free time in the garage working on machines which they’re pretty sure are designed to kill them in this sci-fi satire from Mark Russell

Not all robots #2 jumps head first into the kindling of a war between man and machine. The set-up of this war hinges on societal roles. Mark Russell and Mike Deodato Jr waste no time in kindling the sparks of war underway. Like his recent run on the Flintstones, Mark’s dialogue is poignant. The writer stated in his letter to the readers that the theme of this series is toxic masculinity. There is a lot set up here and the idea of toxic masculinity often gets lost and when it comes into play and lands about as heavily as Hellyboy’s fist. This problem only increases as the narrative begins to ramp upward. 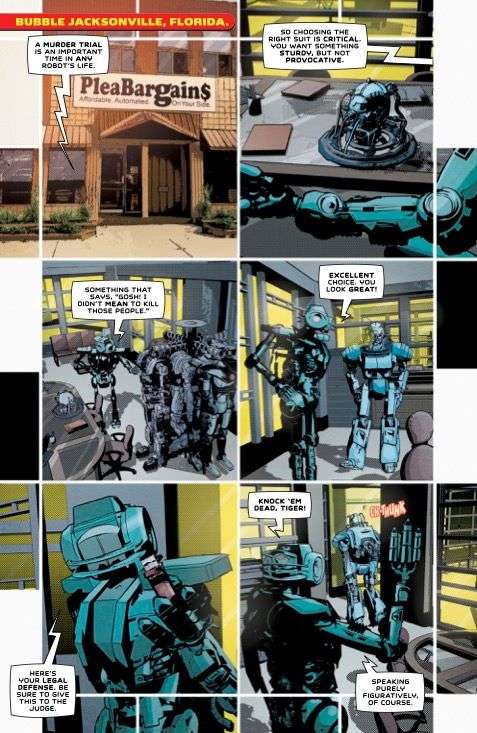 Beyond the heavy-handed politics, the actual story is quite interesting when it’s exploring the machines’ desire for a life outside of caring for humans and the humans’ desire to live without machines doing everything. One side fulfills it’s purpose begrudgingly and the other begins to resent them for it. It’s told in a way that fits Russell’s perspective that toxic masculinity hurts everyone in society, and forces the reader to adopt a certain level of empathy for all perspectives in this tale.

That empathy goes out the window though by the end of the issue. It reads like Mark started trying to make a statement about men and society, but the narrative says the humans and machines resent each other. So, this theme is caught up in the narrative at the point we see Snowball making weapons in the garage. That’s when any and all empathy for him falls away. Despite this clashing of the theme and narrative, which no doubt could’ve been smoother, the comic reads quite strong on the surface. The satirical characters bring a lighthearted humor to this otherwise serious title. In every other way than the theme, this title is great. The art is gritty and grounded, while sharp. This isn’t a vibrant happy world and Deodato captures the dreadful emotions perfectly. Even the surface story of a robot tired of his dead end job is executed with relatable precision. Once Headley, the killer robot, is found ‘not guilty,’ you see the cracks in this world growing. The sparks of war begin to glow as eyes on both sides begin to open. The humans see proof of robotic control, and the machines see vindication of their believed superiority to humans.

Again though, that is only on the surface. Once you dig deeper the cracks in the story itself also begin to show.

Mark Russell’s toxic masculinity in this title is a bit too on-the-nose, but I agree that men’s place in the world, given the recent cultural shifts, is a subject worth exploring. The responsibilities and duties that once tied men down are now lessened and a new generations of men are seeking purpose outside of what society demands of them. Unfortunately, this comic doesn’t read like that. By the end of this issue, albeit through metaphor, it seems as though Russell is simply saying men are dangerous. It remains to be seen if that is truly the case, or where this story will land, but for the time being it appears to be sticking to this theme. So I am not recommending this title.

If you’d like to buy this title you can do so here or order with your LCS.