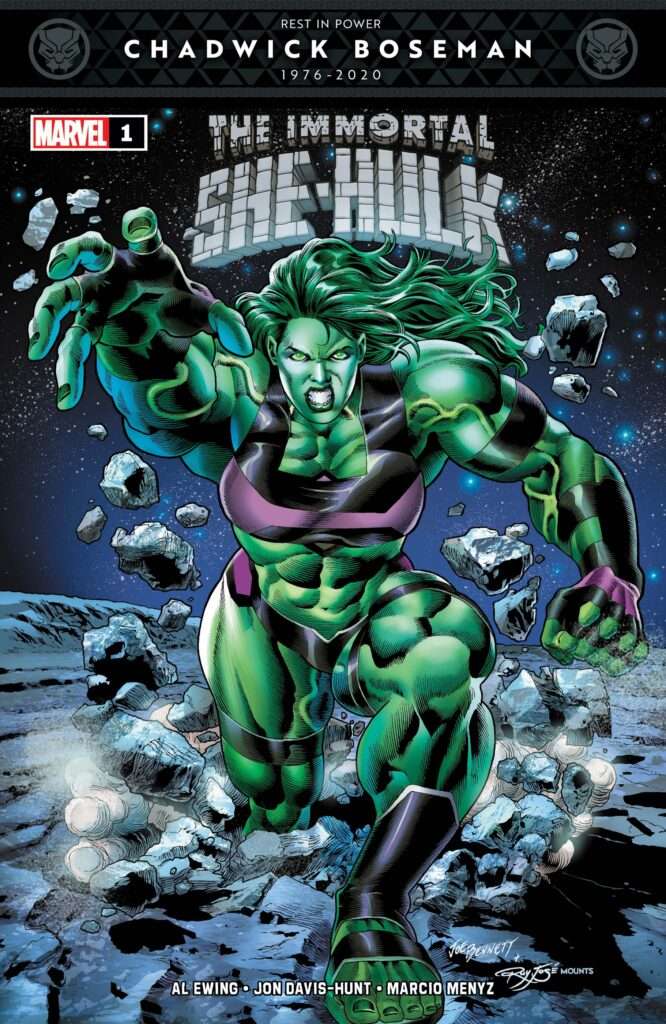 Jennifer Walters AKA She-Hulk is in the midst of a green Door induced existential crisis following the Empyre event. Having died and come back she begins to give actual thought to death, but specifically her deaths. Reflecting on her previous deaths she is shaken and begins trying to grapple with what she truly is in terms of a hulk. She speaks with Wolverine about what he experiences in his return to life and seeks Thor’s wisdom on living for so long. Jennifer is clearly shaken and not just because she is defying death, but because like her cousin each death has brought her closer to the Green Door and the One Below All. 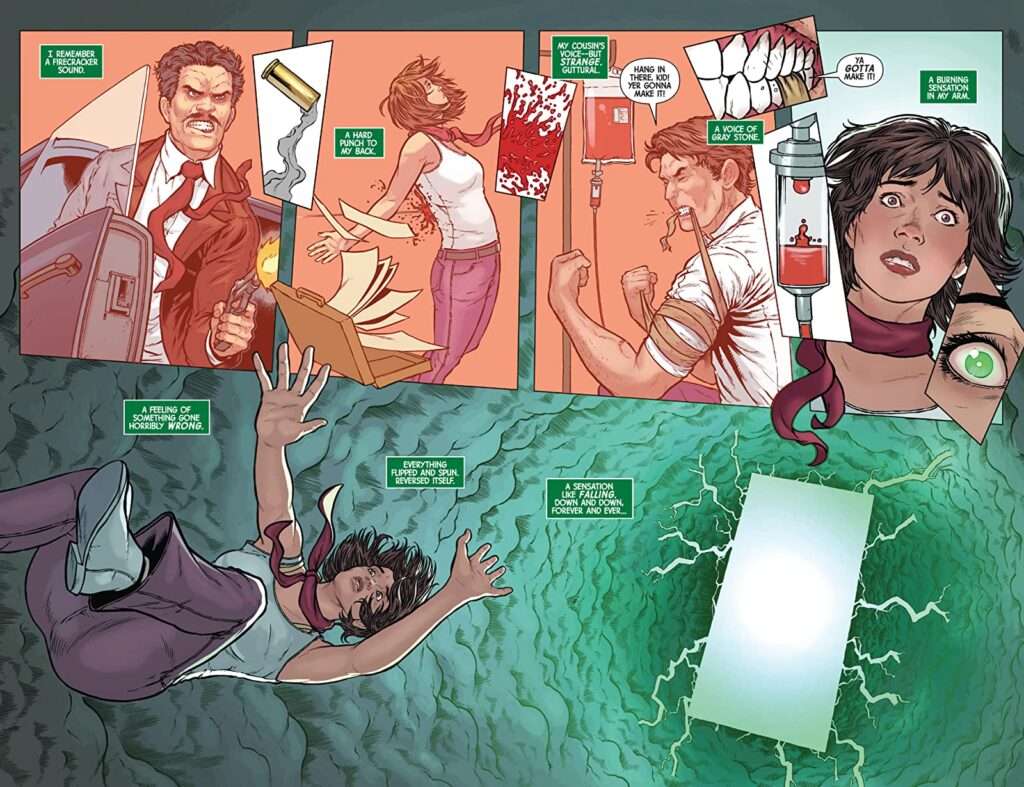 With his recent work on Immortal Hulk serving as a reference point for this one-shot Al Ewing takes a very different to She-Hulk. Whereas the Immortal hulk touches on moments of contemplation with Bruce and life, it often falls short to the horror and action aspects (often one and the same). This one-shot takes a step back and is more thoughtful about Jennifer AKA She-Hulk. She might not be going through everything Bruce is but she is still a hero and has her own demons and deaths to grapple with. The same contemplative moments we see with Bruce in Immortal Hulk we see here with Jennifer and the parallels between the two are good, but in this, it doesn’t stop and makes it far more interesting as just a character piece. Her experiences read like someone who survived a near-death experience.

Jon Davis-Hunt as artist and Marcio Menyz doing the colorwork really help bring this to life. They set the tone and mood of every page by matching Ewing’s words and bringing the characters to life. The art changes in ways to match the story either by becoming less or more vibrate. This on top of the detail to facial expressions sell the mood. It helps the issue to keep your attention along with the stellar writing. 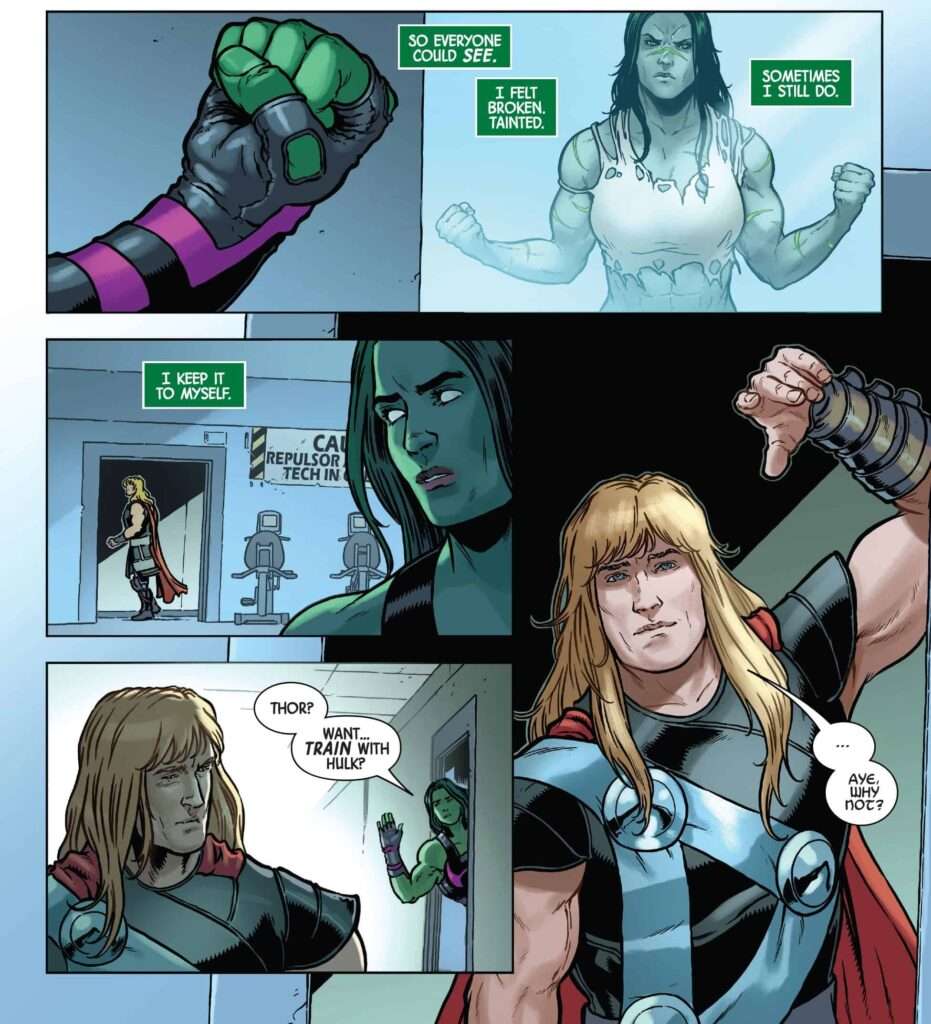 The flashbacks to her deaths and experiences below are where things get interesting and you see the purpose of this one-shot coming through. It is jarring, because one minute she is talking about her life and death, and then BAM!  We’re tying in Immortal Hulk and taken out of the mood a little. This has been done in worse ways. By using previous marvel events like Empyre and Civil War 2 they create a transition for the immortal Hulk nicely.

First off, If you haven’t read Immortal Hulk and want to then DO NOT READ THIS! It has major spoilers.

Secondly, Al Ewing, Jon Davis-Hunt, and Marcio Menyz make a memorable one-shot and tease us with She-Hulk’s inevitable addition to the Immortal Hulk run. That is the problem with this.  It’s done well, but in service another series. It also teases what a good creative team behind a She-Hulk title could do and that is the real crime here. It’s a taste of a good She-Hulk comic and that sucks because it leaves you wanting more, but that only comes in team titles.  This one one-shot is worth it if you are already reading and collecting Immortal Hulk, but if not you can skip this.