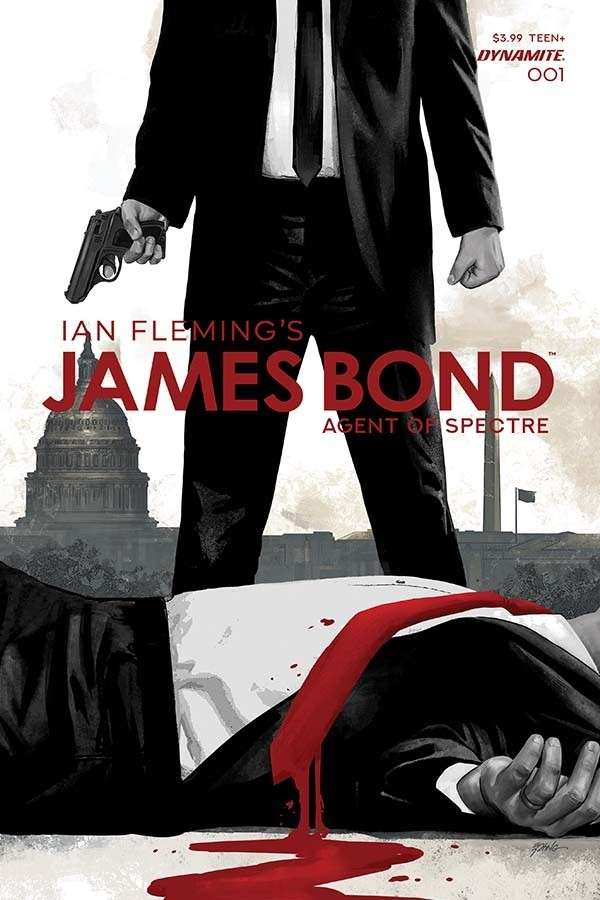 M.I.6 has been compromised in their mission to bring down Spectre. Fewer leads, clues, and trustworthy colleagues have them in a tough spot.  There’s a complicated civil war brewing within SPECTRE, with an upstart American member of the notorious criminal ring attempting a dangerous coup to usurp Blofeld’s reign. She’s on her guard against Blofeld’s henchmen, so to eliminate her out, Blofeld recruits a wild card – James Bond!

With Blofeld blackmailing Bond using his good friend and fellow spymaster Felix Leiter as leverage, Bond reluctantly agrees to the task. But he hatches a clever plan to use this internal friction to bring SPECTRE down once and for all. Will he succeed, or will Bond be stuck on a dark path he’ll never recover from?

Be it from the books, movies, or current comics anyone who keeps up with the character of James bond knows about Spectre. Ao, this premise alone should elicit the kind same kind of reaction as finding out Captain America was suddenly a hydra agent. Even the premise had me very skeptical as to what the heck was going on with this. The difference with this is the set-up. When you set up a story properly and establish the stakes you are on a good footing to move forward.

Christos Gage sets everything up properly with this. In one issue he establishes the stakes, motivation, and overall situation to move this story forward knowing everything you need to. His history writing for other publishers shows that he can take on established characters. Luca Casalanguida handles art and at this point, their style has become a staple of the series. Which is good given the potential for this to go bad.

The biggest concern with this is how Spectre is going to be portrayed. With James going Spectre, Gage is clearly going to be taking a look at Spectre and taking James and us, as the readers, how this path of an established known entity. The way he handles Spectre could make or break this story.

This is a launching point for a new story and direction for James and Spectre. It could be good, but also bad. Gage is juggling some legacies here and it’s hard to tell from a first issue how it’ll play out. I hope for the best. If this goes well though it can be a great expansion on Spectre and make them out to be more complex and give us as 007 fans a greater idea of them. If you’d like to buy it you can do so here.