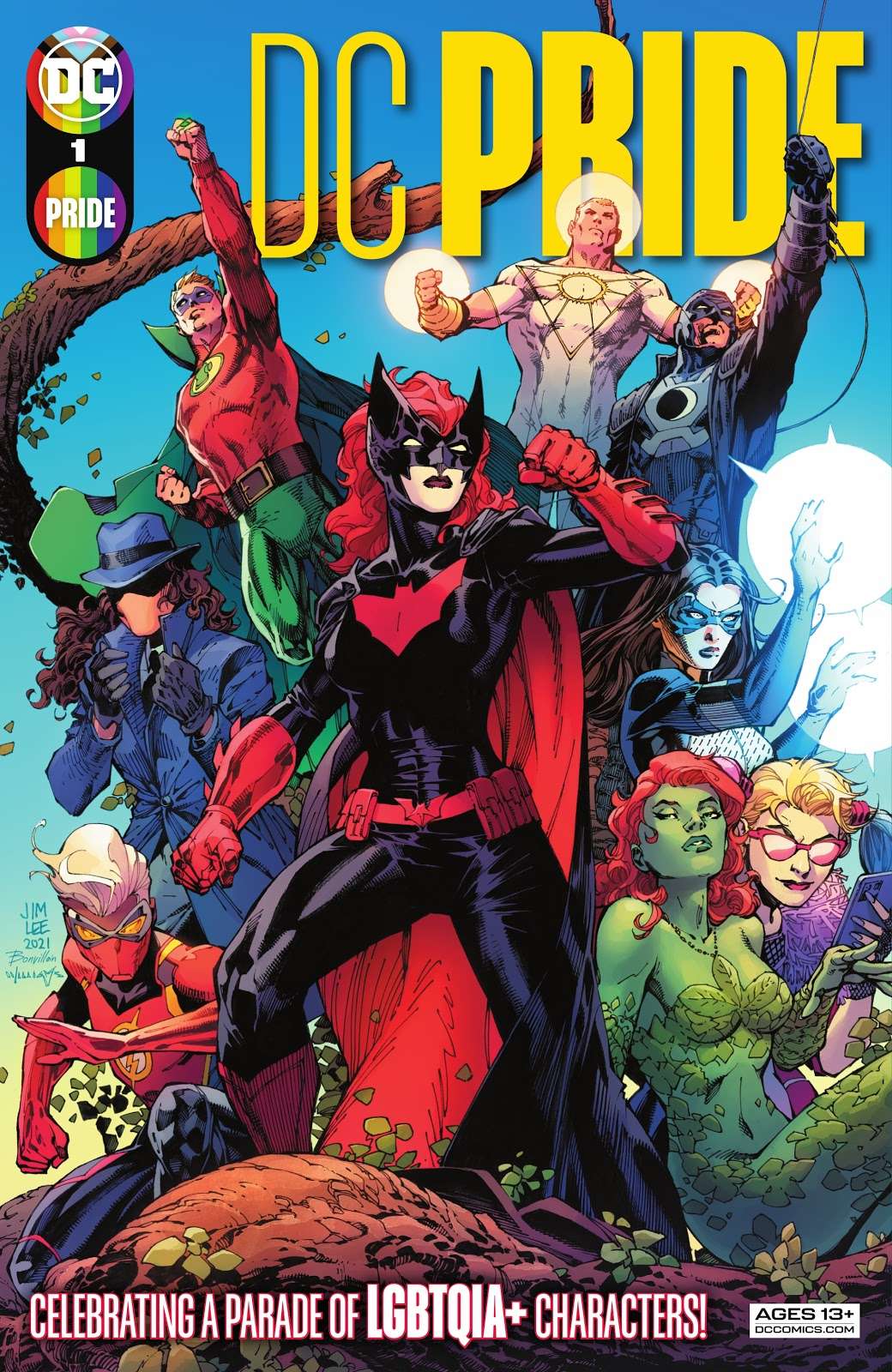 It’s June and DC Comics has published DC Pride to celebrate with nine all-new stories starring fan-favorite LGBTQIA+ characters Harley Quinn, Poison Ivy, Midnighter, Extraño, Batwoman, Aqualad, Alan Scott, Obsidian, Future State Flash, Renee Monto ya, Pied Piper, and many more. I decided to give it a chance and will give small reviews to all of the stories in the anthology comic below. 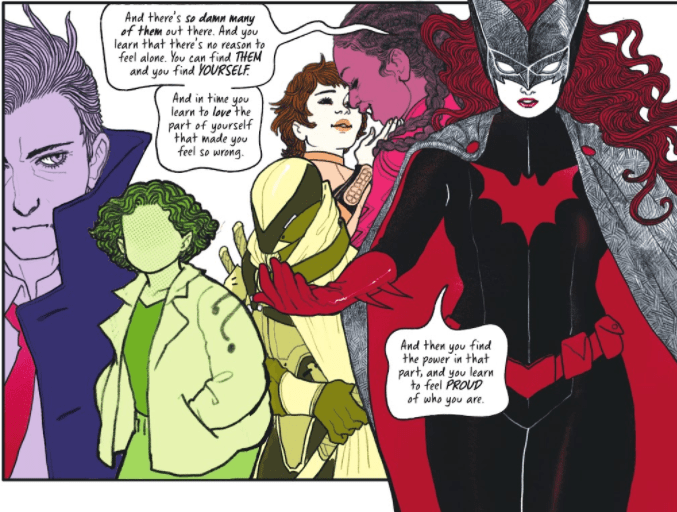 The Wrong Side of the Looking Glass

The first story is clearly a message to the readers out there who are confused sexually and feel like an outsider. Told through the confrontation of the mad Hatter attempting to mind control Kate and Beth to make them the same (Alice in his wonderland). It begins with a nice start that isn’t overly heavy-handed, but is still very much on the nose and clearly a message to the reader. The message being not to hate yourself. You aren’t wrong or an outcast.  If you are LGBTQ+ then you aren’t alone. The tone is set and thus the anthology begins in earnest. 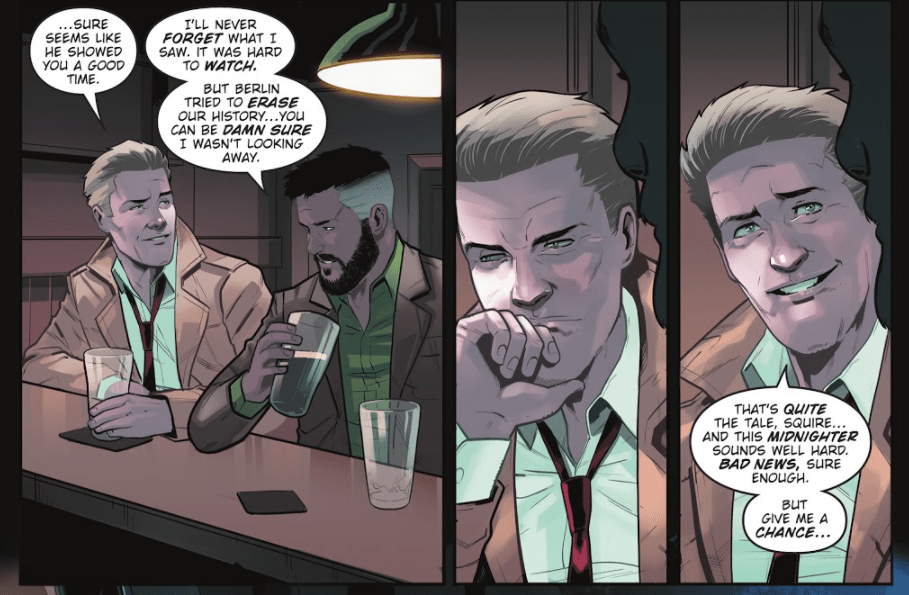 This was a sore sight to read. The old DC comics character Extraño is dragged out of the archives and given a spotlight with Midnighter. Why? Because a Nazi vampire wants to rewrite history to turn queer figures like Achilles straight. Did you bring back a classic new Guardian to fight a cliché of modern villains? Boo. The main focus here is the fact that there is a threat to queer history. It makes sense that Extraño is brought back for this threat with Midnighter, since both are gay characters and the first few openly gay within the comicbook medium. It also makes it personal to them to lose their history just because someone doesn’t like it. 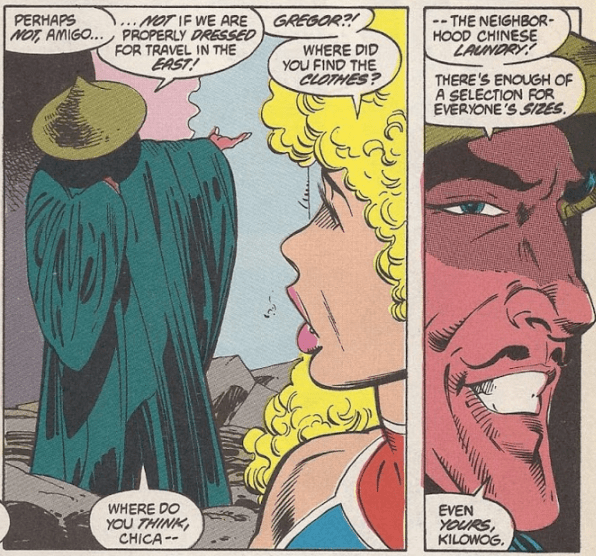 Past iterations of Extraño are what we’d call ‘gay face’ now or what was considered a “dandy”. He wore flamboyant, flashy clothes and was quick with quips.  This and his own inner dialogue were used to make it very clear he was/is gay. Now, he’s very toned down and it’s just a sad sight. He’s been turned into a Doctor Strange doppleganger complete with the grey fade. Yes, his past iteration was a stereotype, but he isn’t even the same character now. It’s understandable that the writers and artists want to avoid ‘gay face’, but at the cost of his character, this new change made me sad. It’s barely Extraño. If DC wanted a Doctor Strange analog, then this is it though. He isn’t the same, but in name and magic. This should’ve been a poetic tale, but instead it’s just ironic. The story of a historic gay character fighting to preserve historic gay characters, and he wasn’t even preserved…

This tale starts with Renee trying to save a local attorney now running for the city council. It’s a simple missing person case for a great detective. The narration by Renee even has a very noir feel to it. Then the second half of the story is when it shifts to a romantic angle. She’s attracted to the attorney and vice versa. They share a pleasant kiss and it ends. It’s not heavy-handed in messaging unlike the previous stories, and actually feels like I’m reading about The Question, who just happens to be a lesbian. This is a prime example of how I believe comic writers should write a character that’s a part of the LGBTQ+ community. Her sexuality isn’t who she is, but it is a part of who she is. It’s featured, but not prominent. And it even has a little tease at the end of more to come. The art by Skylar Patridge is stellar in this story and the coloring work by Jose Villarrubia slaps an appropriate down and dirty texture on it. My biggest takeaway was thinking they could possibly make a good team for a new Question run.

It’s also worth noting that Vita is the writer for the upcoming Static title. With her work here serving as an example, I think there is some hope for the upcoming run. Then again, only time will tell. 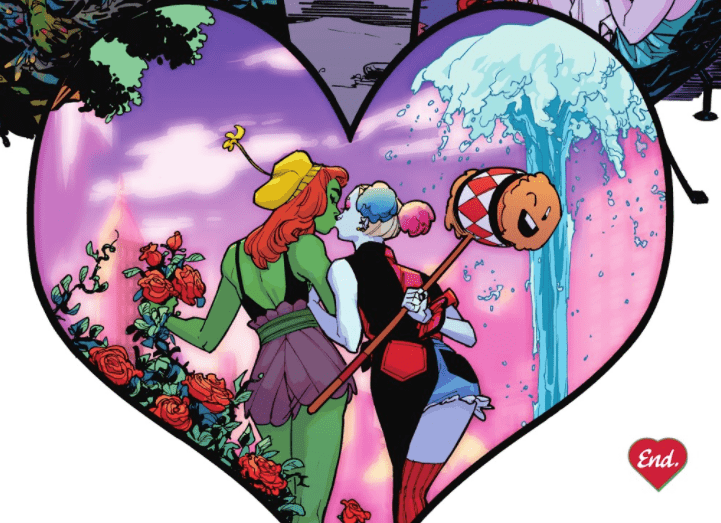 Another Word for a Truck to Move your Furniture

Skip this story. There is nothing covered here that hasn’t already been covered in regards to Ivy and Harley’s relationship and Harley’s PTSD from being with the Joker for many years. Amy Reeder and Marissa Louise do a fine job on the art, making it bright and eye-catching, but in terms of substance, this is simply not worth the retread unless you’re new to comics.

He’s the Light of My Life

I thought the treatment that the original Green Lantern Alan Scott gets in this book should’ve been the same for Extraño. He’s the same Alan we know and love, but this time we’re delving deeper into his relationship with his son. Alan’s generation was during a time that gay men were looked at as degenerate sinners. Often victims of hate crimes and more. Sam Johns does a good job of showing us an emotional and personal side of Alan in regards to his sexuality while also tying it together with his relationship with his son. Given more time, I don’t doubt that Johns could pull off a nice one-shot that further expands on how his son’s coming-out and confidence to live an authentic life was inspiring Alan to do the same for himself.

I remember seeing a movie once about an older lesbian. That couple came up in the 1950’s and lived to see the 90’s. They were in awe that people like them were being more accepted more widely and it gave them hope. This story feels like that one and with a dash of family struggles. An old gay man coming out to live his truth and reconciling the damaged relationship with his son, starting with brunch and a hug.

Gracing us again after Future State is the latest incarnation of the Flash – known as non-binary, so this story plays out a bit like ‘Try the Girl’. This is literally a day in the life of this Flash and we actually get a strong and charming characterization. You see how Andy performs heroics. The interesting part here is that the non-binary aspect of them is touched on in one of the most unforced ways I think that’s ever been put to comics. No speeches or cringy exposition. Race doesn’t even come up. Shit! It’s like a breath of fresh air.

Often when writers stick to the binary of sex and gender they put a hard line between the feminine aspects and masculine aspects of the character, but this Flash nimbly blends the lines between the two. You understand that this Flash is nonbinary because they embody both feminine and masculine aspects. Flirting with Andy like a strong confidant man, but outfit shopping like a woman. Complete with a montage. Then the protégé of the Mirror Master makes an appearance. Again, as previously stated with ‘Try the Girl’. Their gender identity isn’t the focus of who they are. It’s simply part of who they are. 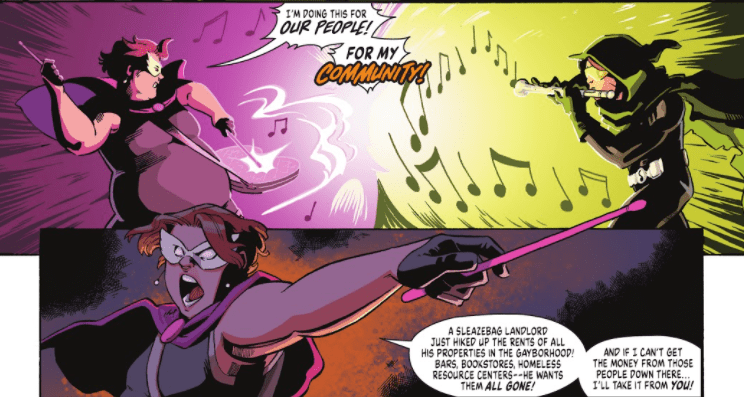 Be Gay, Do Crime

Wow. Was Sina Grace serious with this story? It has nothing to do with the main theme of the anthology, except that the Pied Piper is gay and Drummer Boy is extorting the rich for a neighborhood housing for many LGBTQ+ people. The fact that this got past DC’s editors is crazy. The messaging is so confusing.

Don’t mesmerize the rich and get them to give you money. DO extort the property owner. What the hell?

The worst part is that it takes Pied Piper back to being a bad guy. Or is he only willing to do this for other queer people? Not good and thank God it’s short.

Ultimately the takeaway is that it’s okay to hurt people if it’s for the good of the disenfranchised. What lesson does this teach? What was Sina thinking? 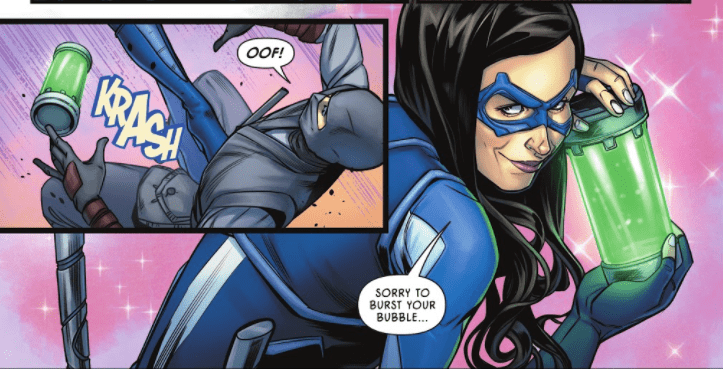 So as not to repeat myself, please see my previous impressions of ‘Try the Girl’ and ‘Clothes Makeup Gift’ above. It is worth noting that the much talked-about addition of a trans character to the DCU isn’t exactly true. She exists within the comic version of the DCCW. So that is a plot twist for all those thinking she’d be fighting alongside the Trinity or other big-name leaguers. The real stand out in all of this though is the art. Rachael Stott and Enrica Eren Angiolini team up to create a very well-defined and spacious world on every page. No panel is too big or angled awkwardly. The only real downside is the action often switches between dynamic and easy to follow and jumpy. All in all though, the best part of this was the art. 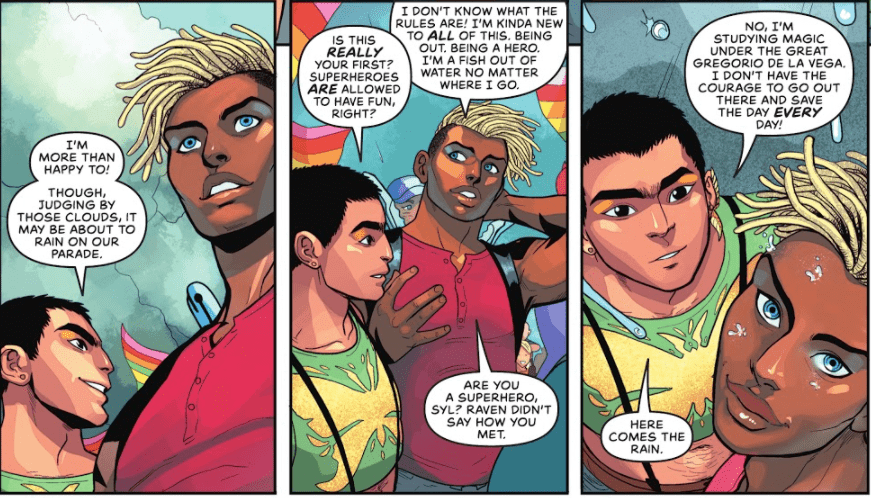 Full stop now. This is where the Justice League Queer is introduced at a pride parade attacked by Eclipso.

This really comes off as nothing but pandering. All the members are teen to adult age and without a doubt being pushed to the forefront. It’s awkward and it simply doesn’t work. Especially Jackson’s characterization. He talks about fighting alone in the past and that is not true. He was a member of the Teen Titans. Again. This story is nothing but pandering to the LGBTQ+ characters. These characters deserve better and don’t deserve to be relocated to a diversity team. 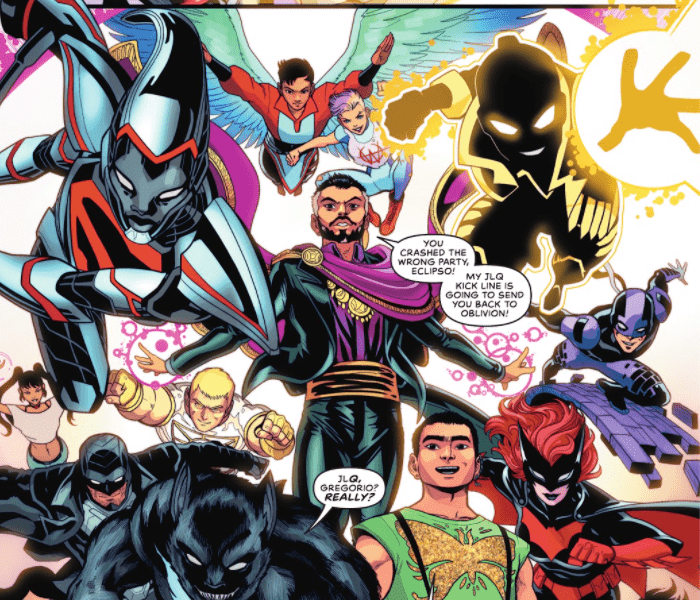 I can wholeheartedly say that this title is not worth the buy. It doesn’t do the idea or ideals of gay pride justice and instead just panders most of the time. It’s a true shame. These writers are good and much of the art is fantastic, but this anthology cannot stand on its own – as a stand-alone comic. Could someone pick this up and read it without knowing anything about these characters previously? No. Could someone pick this up and enjoy the thematic element of LGBTQ+ pride? Maybe a little, but the part you’d enjoy is mostly  overshadowed by heavy pandering and some of the forced changes. This issue also requires some previous knowledge of Future State, characters like Supergirl, and much of the main DCU. This means you can’t just pick this up and enjoy it stand-alone.

Still, if you’d still like to try this title for yourself, you can find it on Comixology, you can buy it here, and you can also check your LCS for this anthology.