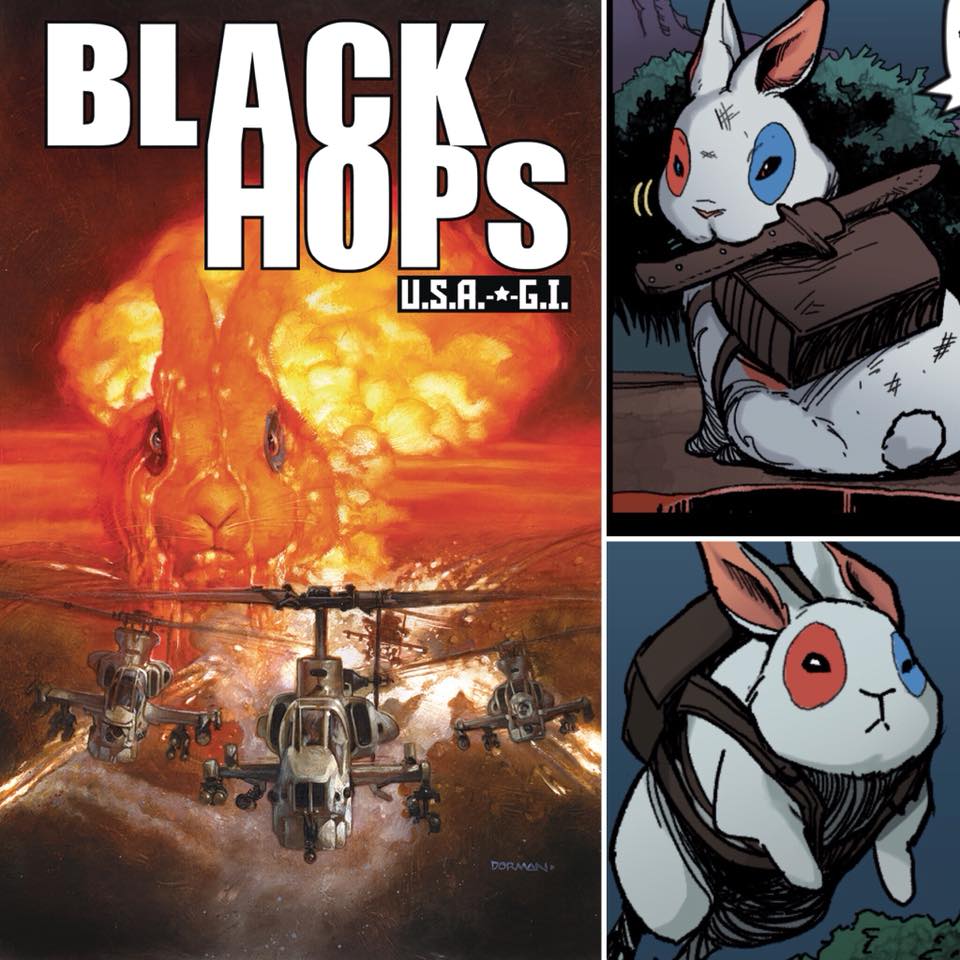 My favorite Disney movie is Wall-E. The story isn’t nearly as good as Toy Story, and no movie soundtrack will ever outshine Aladdin as far as I’m concerned. Nevertheless, Wall-E is where it’s at for me. Why? Because it’s what every writer should aspire to when they sit down to write character dialogue. Particularly in the comic book and graphic novel world. At no point in Wall-E is the viewer ever left to wonder how any of the many non-verbal characters are feeling. Expression and gesture serve as our guides into the inner thoughts and feelings of the metallic cast members, and the writers and animators spoke to the viewers in a way that I feel no film before or after has been able to do.

I don’t know if Timothy Lim and Mark Pellegrini have watched Wall-E or how they feel about it, but I do know that the way they drew and wrote their silent protagonist (*code name U.S.A.-G.I.) is very much in the same spirit as that incredible film/character …more on that in a bit.

In Black Hops: U.S.A-*-G.I. #2 (Antarctic Press) we catch up with our protagonist after narrowly escaping death at the hands (paws?) of a powerful and heartbreakingly devoted attack by a white lion. Then, dodging a precision airstrike, our fluffy hero (I shall refer to him as ‘Hops’ from here on) gathers his equipment and continues his assault on a North Korean regime hellbent on launching an ICBM that threatens the safety of every American citizen living on or near the Hawaiian isles. 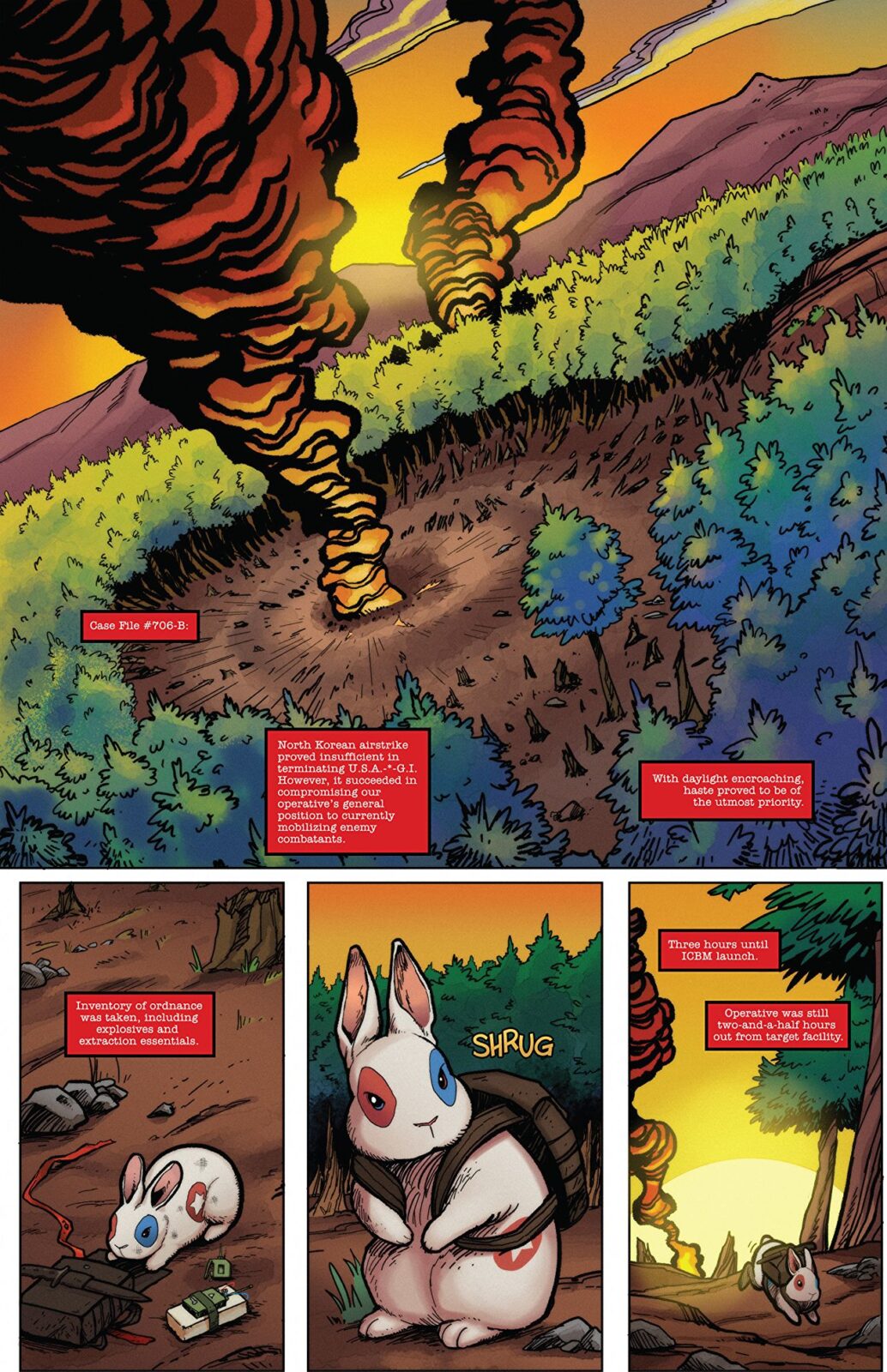 An elite strikeforce of NK commandos is dispatched to hunt down and eliminate any intruders. Unaware that they are dealing with a single highly evolved fluffer, they are quickly baited into following Hops through the brush. Hops then pauses by a large tree and waits a moment. The subsequent panels give us a glimpse into a hidden dialogue that ultimately manifests itself as a primal agreement between Hops and the snakes that have been making their home within it.

The panels are simple and incredibly effective. And just as Wall-E would not have worked without the brilliant animation that allowed for such subtle communication to shine through on screen, Hops could not speak to us nearly as well without Lim’s brilliant art, and Pellegrini’s brilliant restraint.

Hops then goes on to infiltrate the launch site using a variety of surprisingly believable tactics to sneak his way in undetected. 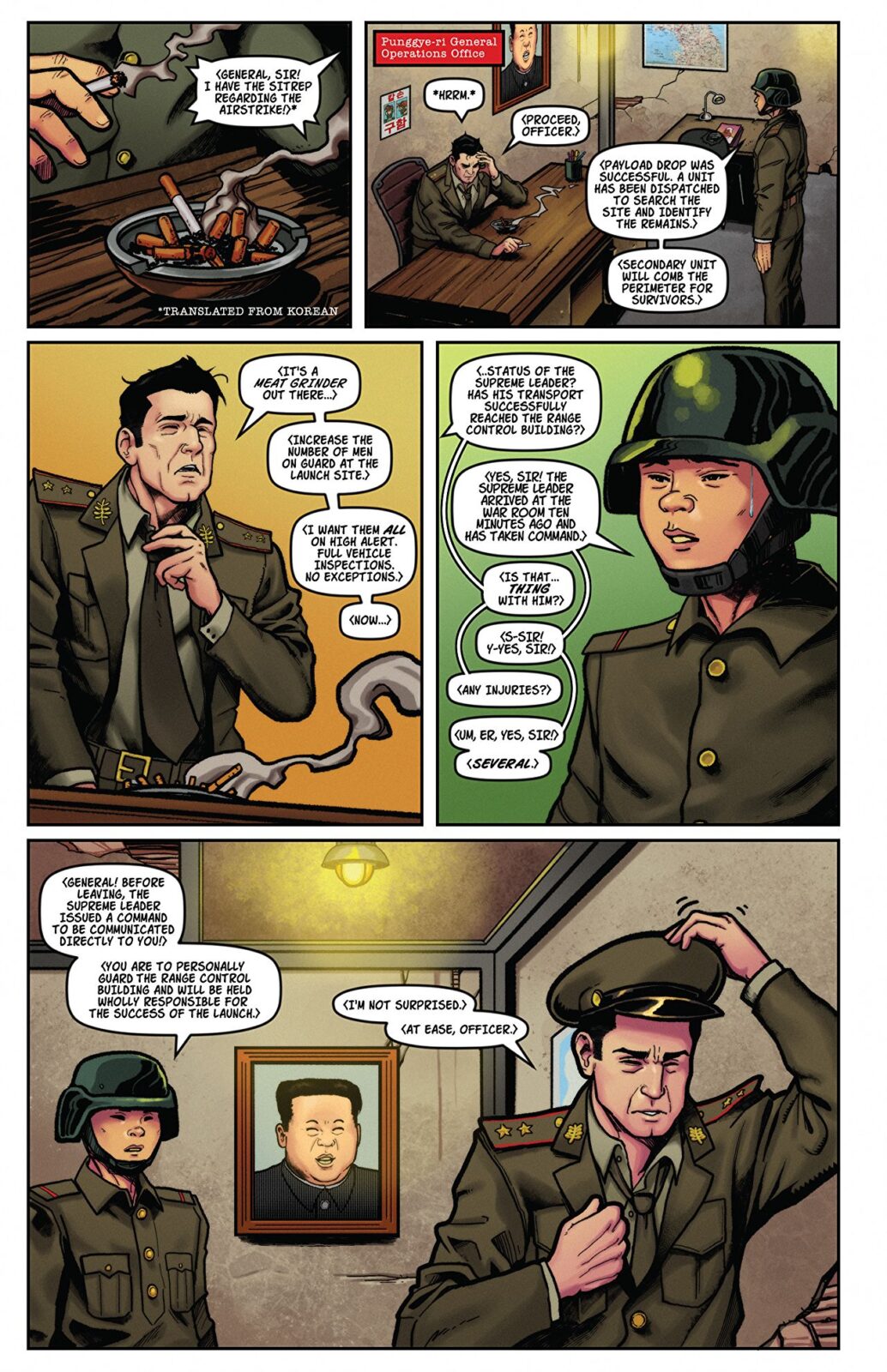 I want to take a moment to emphasize just how adorable Hops is in every single panel. Whether kicking an enemy into orbit or holding an enemy soldier hostage at knifepoint. It’s remarkable really. It shouldn’t work. You can’t make a Rambo care bear, and still call it a care bear after all. But no matter how ugly the world gets, Hops remains an adorable little creature through and through.

We are then treated to a fun bit of cryptozoology soon after as Hops is forced to contend with Kim Jong Un’s deadly pet before he can finally accomplish his mission. Fact and fiction then meet somewhere in the middle as Lim and Pellegrini weave real-world events into their story to give us a satisfying conclusion to the adventure we embarked upon in Black Hops #1. 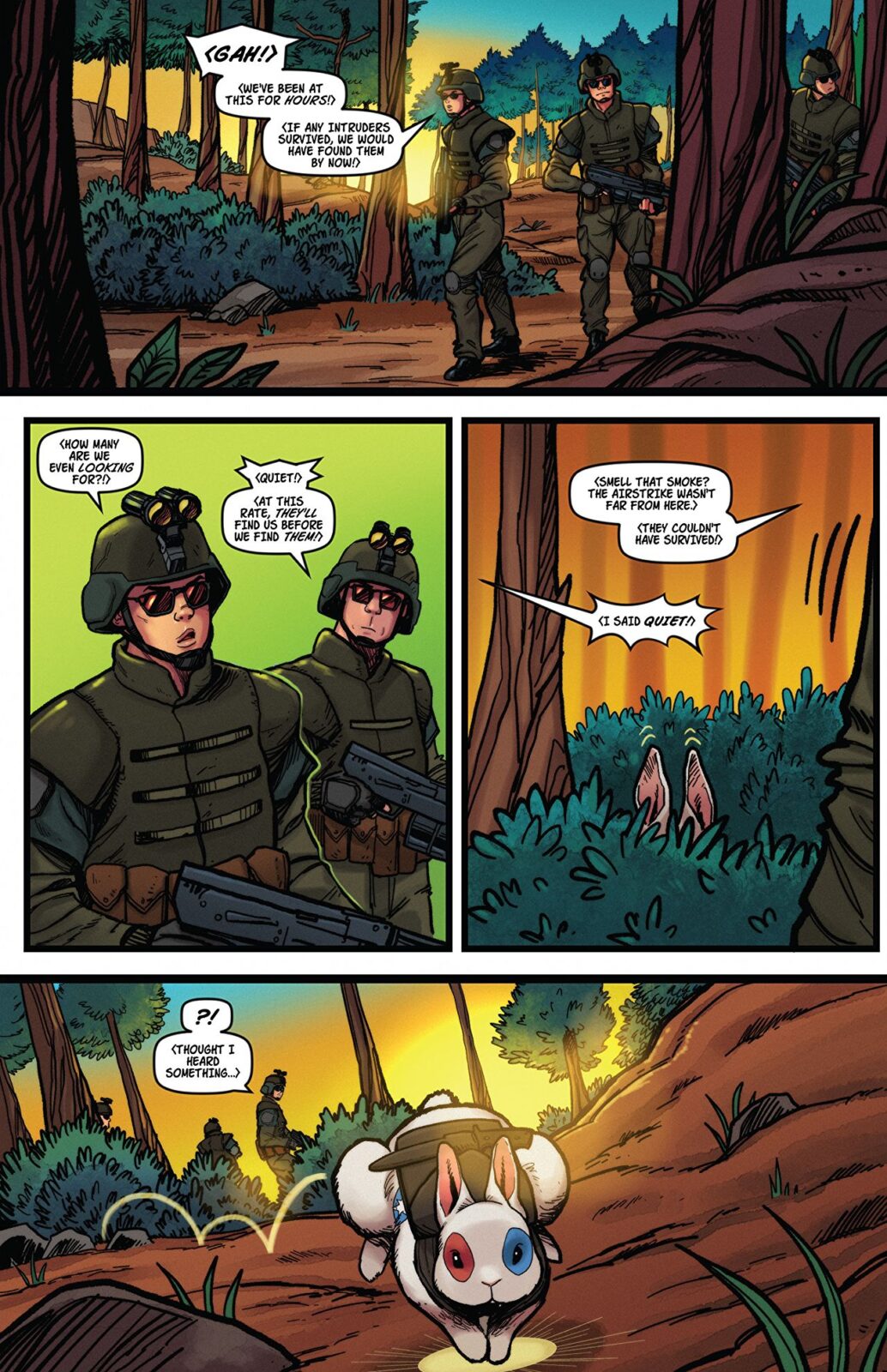 When I reviewed Black Hops #1 I remarked how absolutely ridiculous this story sounded. A long-lived elite mutant rabbit soldier that doesn’t speak. If you pitched me that story I would laugh you out of the room. Or I would tell you to tone it down and turn it into a children’s story.

Let me be clear. It IS a ridiculous story. and IT WORKS. Somehow, it actually works. You will feel for the characters. Whether they be enemy soldiers or Hops himself. You will care, even if there’s not a word of dialogue to be seen. Rather than heap praise upon Lim and Pellegrini for the quality of their story and the artwork within. I would rather you know that when you are finished reading Black Hops #1 and 2, you will find yourself caring for a tiny rabbit commando as much as you have ever cared for any hero you have ever read about in any story.

It’s cute, funny, and surprisingly heartbreaking at times. But most of all though, it’s fun. Really, really fun. You haven’t lived until you’ve seen a mutant rabbit adorably pull the cord on his surface to air recovery system. Go get this right now. ……what are waiting for? Now!

Get Woke... Disney's Stock Now One of Worst Performing of the Year
In Case of Bomb, Blame the Fans: 'Lightyear' Director Lashes Out
Lightyear Owned: 'Minions: Rise of Gru' Proves Families Want Non-Woke Fun
Flopyear: Disney Has Become It's Own Worst Enemy
Lightyear’s Failure So Severe It Could Impact the Disney Parks
'Lightyear' Disaster is a Harbinger of Disney’s Woke Reckoning
Disney's Disaster: Why 'Lightyear' Failed so Miserably this Weekend