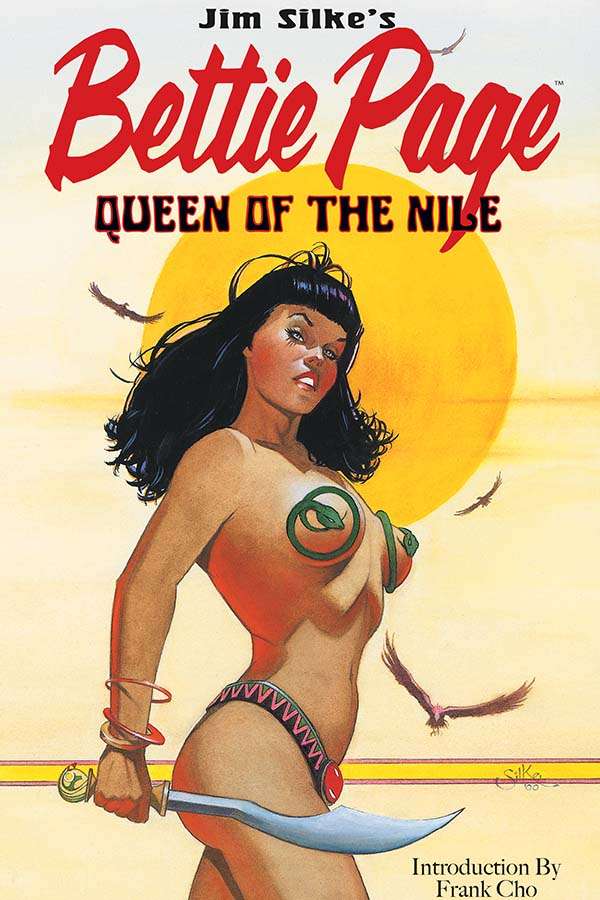 Bettie’s back and in all kinds of trouble! A low-budget time machine mistakenly transports Bettie to ancient Egypt, where she battles the High Priest of Amon Ra, assorted thugs, and a lovesick mummy twice her size. She wiggles and squirms and bumps and grinds to avoid their evil clutches, but she can’t avoid the inevitable: everyone falls in love with her and she manages to frequently lose her clothes. When Bettie falls for none other than Julius Caesar, the Roman general can’t decide between Bettie and his main squeeze, Cleopatra! Collecting Jim Silke’s outrageous and stunningly illustrated series, as well as his hard-to-find Bettie Page Comics: Spicy Adventure.

Firstly, this book is spicy. You’re taking a huge bite of cheesecake when you read this. There isn’t really anything more spicy than Bettie being topless a couple of times, but there is also a lot of innuendoes.  That said, this feels like a love letter to Bettie as a female figure in the comic book world. Bettie is frequently cited as the original pin-up girl and this collection focuses a lot on that. Is it a lot of cheesecake? Yes. When you take a look at the way the character is posed in those panels, you’ll immediately notice that it’s in some form of a modeling pose, but it’s not really lewd, more of an appreciation of her alluring form.

The story is pretty basic. Following a sudden kidnapping, Bettie goes from damsel in distress to time traveler and eventually. ‘Bettie Page: Queen of the Nile’ is a fun mash-up of genres, but ultimately it sticks to a steady formula in terms of narrative. The simple story though keeps everything light and fun, much like Bettie herself.

I recommend this, for the age-appropriate audiences of course. It’s a spicy cheesecake that goes down easy. If you’d like to grab this spicy trade for yourself than you can do so here