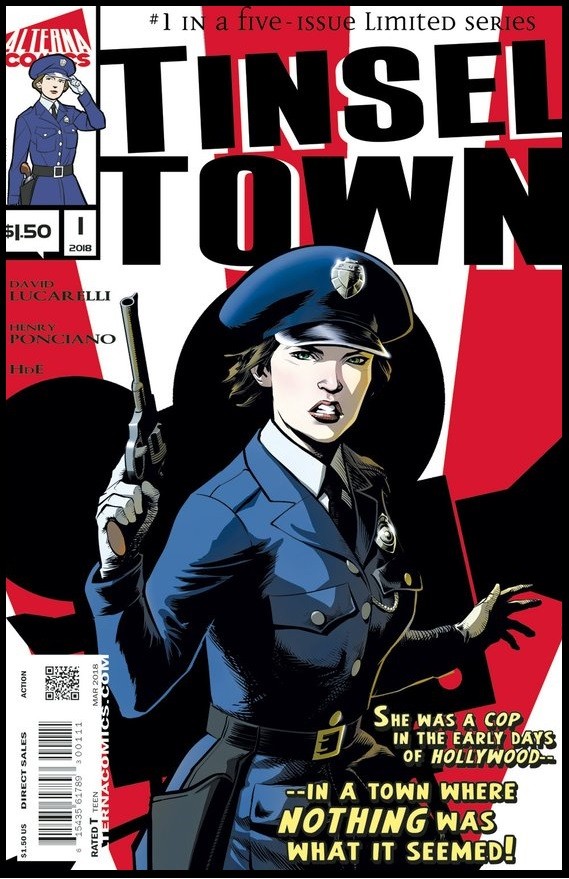 I figured I’d try  something a bit different with this title. I thought I would get the perspective from folks who had no history or thoughts about reading comic books at all.

Sort of a mini social experiment to see how appealing a book that isn’t even mainstream (yet) might resonate to the average person…or not.

What about someone who might be completely ambivalent and indifferent or maybe even someone with a negative point of view of comics in the first place?

What if you could get someone who has never read a comic – to read one ?

And so what did I find?

The person I handed Tinseltown #1 to was a woman who works in her retirement as a cross walk guard. A great friend to all the children in our neighborhood.

“Barb” has memories of reading Lone Ranger or adventure style comics in the early 1950’s. She says she is familiar with comics only because her brothers all read comics. This is almost fifty years ago. She is basically a non-comic book reader. 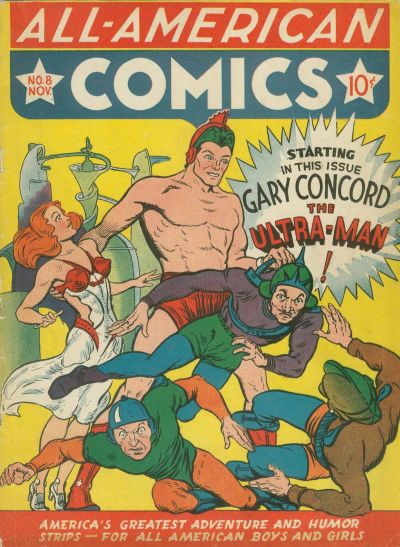 So Barb is given Tinseltown for the night and I waited eagerly to hear what she might think.

As I approached the crosswalk the following morning to take my child to school, Barbs’ first comment to me was:

And so what does a grandmother of three thinks of Tinseltown ?

She said she likes the character of Abigail because she’s not an impossible super-hero. That is the part of this story she can relate to. She was glad I didn’t bring her a super-hero comic.

She was frustrated that she came to a cliffhanger and I told her this was good. She asked me why and I smiled and said –

“Well you’ll just have to go to The Comic Hunter and pick up the rest won’t you?”

“Of course,  you  just walk right in there and tell them what you’re looking for.”

So  Barb seems to be looking for a toon that is more like one of us, an everyday person. 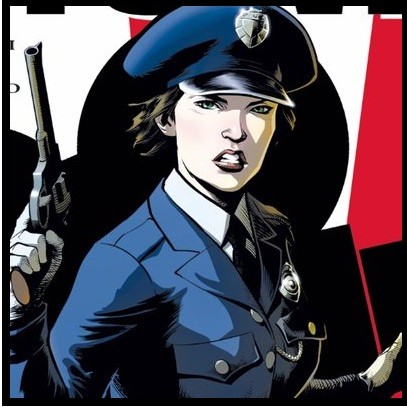 She told me that she likes the pastel colors that Henry Ponciano has used. She tells me they are easy to look at and she finds them soft. She was happy that they weren’t overly flashy or brilliant and not cluttered with too many details. She was a bit nervous that it might be overwhelming and felt she would have to “interpret” so much of the story and that she didn’t know much about art –  especially comic book art.

She said “the pictures look very smooth”.  I told her that it is not always the person writing the story that is doing the drawing. Did she think that the person drawing had the kinds of pictures that represented the story well? She said she thought it fit very well. Indeed, before I told her so; she had assumed it was the same person drawing and writing. 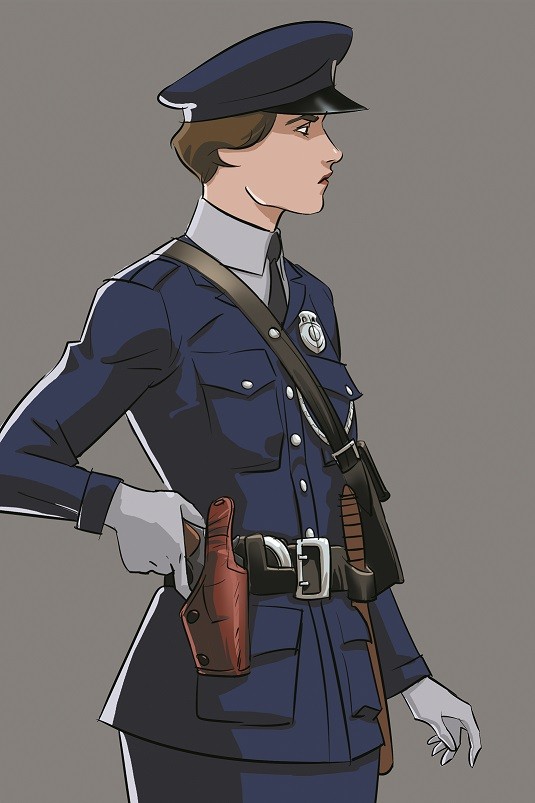 She really liked the last pinup style image by Henry on the final page of the book. She said she thought it would be a very inspiring image at a police recruiting center for young women who might see it. She wondered if there might be a poster of this picture of Abigail. I laughed and asked her if she’d buy one if there were any and she said “Sure”. I think I would too.

She said she thought it was weird that you never see anyone smoking on TV or media anymore. Surprised that she would pick such a tiny detail from the book, I asked her if she thought the smoking should be represented in the comic or not.  She said, no she is a non-smoker but to have them smoking – she thinks – makes the story more believable. It made the story feel more real for her. Tinsel Town takes place during a particular historical period and it belonged there she said.

Barb told me that she really liked the letter David presented at the beginning of the book. She’s a mom and she told me she found it very touching.  This intro made her eager to meet the main character before she had even turned the page. She says the letter made Abigail’s character feel that much more personal to her.

She asked why there aren’t many newsstands around like there used to be. 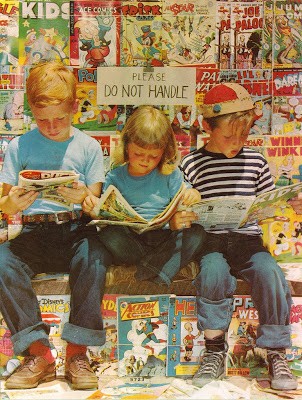 Now that is a great question Barb…

I asked her if she would really would go to the local shop to pick up her own copies of this story, and she said she most certainly would. I most certainly hope she does.

I think that this particular title is a great fit for Alterna Comics’ return to newsprint concept.

I really like the book as well. I find the story telling over 3 issues keeps me asking myself why these particular titles I’ve seen from Alterna lately are all limited series.

This is another great title. It certainly may be the type of book that has a much wider appeal.

Abigail is a great character.

She is still stumbling around, trying to find her way; but we like her immediately.

I hope that the recent upswing in attention that Alterna is receiving lately pays off in confidence and some great work going into the new year.  Perhaps by then we could see some really popular and promising story lines be developed into some regular monthly titles.

My overall impression that no matter what you are looking for in a comic book,

Alterna Comics has something for you.

Tinsel Town is great proof of that.

Might we get our hands on more of these great stories from Alterna Comics by the spring of 2019 ?

Tinseltown is a title that would certainly be on my list, if it was a regularly issued title.

Check out my review of issue #2 here! 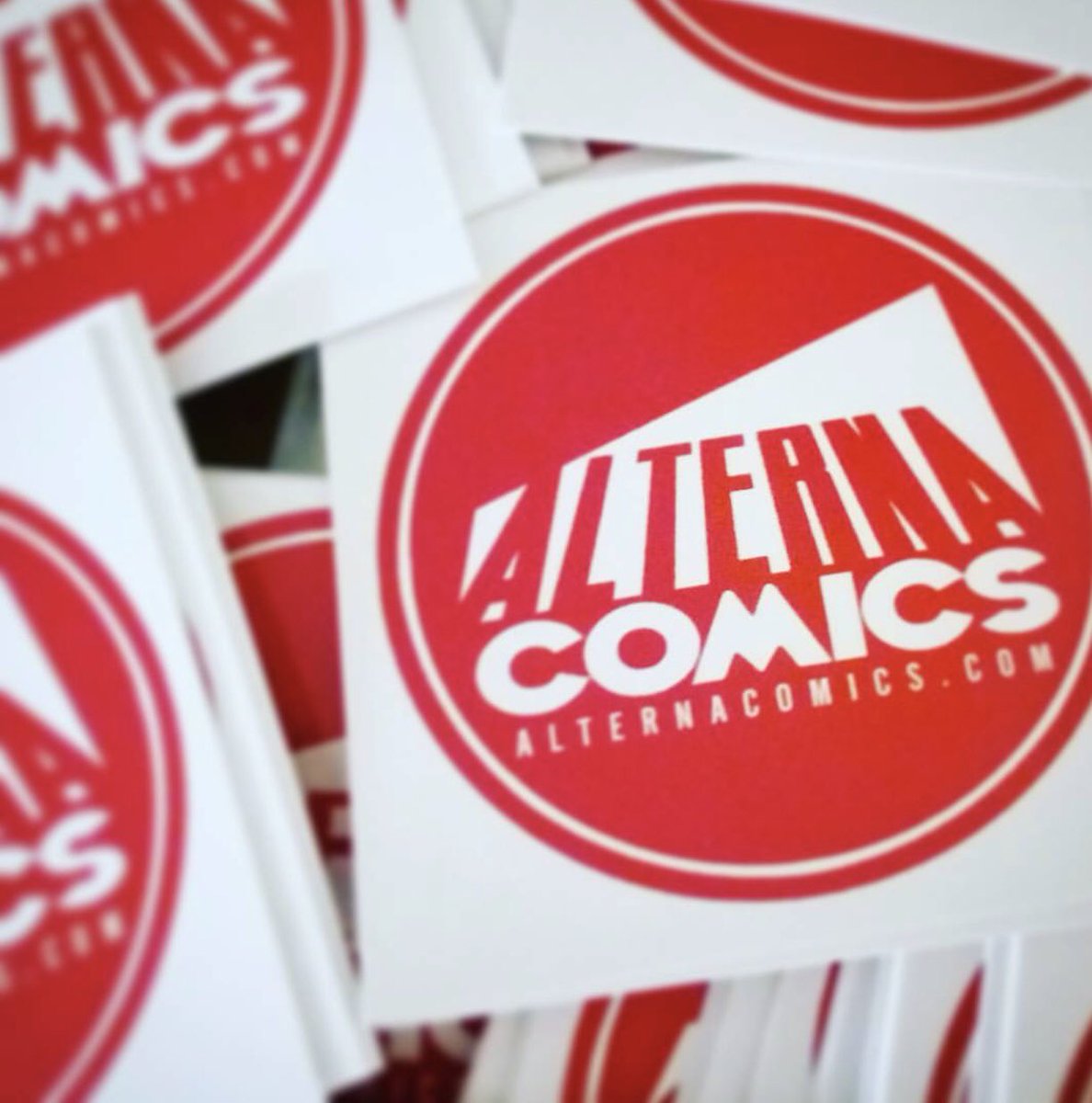