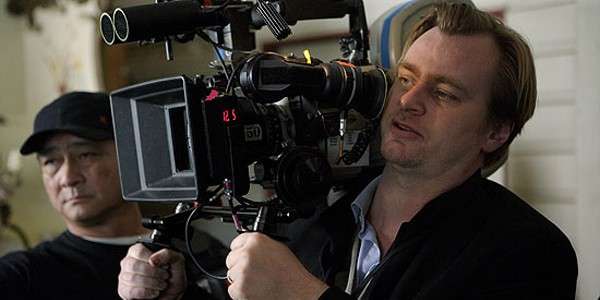 Christopher Nolan’s done a lot in just over 20 years in the industry. With a meteoric rise from nothing as a former English Literature student with a camera in Following to the director of heady, wildly expensive Hollywood entertainments like Tenet, Nolan has become one of the true auteur voices in big budget modern filmmaking. Heavily inspired by Stanley Kubrick and Graham Swift’s novel Waterland, Nolan’s films are the work of an active intellect looking to engage his audience, usually through narrative’s more mechanical aspects like plot and structure.

That inclination can lead him to making the occasional emotionally unengaging spectacle like Tenet or even Inception, perhaps betraying a certain need for his brother Jonathan’s influence on his writing, but even then they’re filled with such sights and sounds mixed with an eagerness to entertain that the films can’t be dismissed completely.

This has been a fun, trippy road, made all the weirder since I went backwards through it, watching his cinematic style devolve rather than evolve. I’m sure he’ll be making movies for twenty more years, so I look forward to re-evaluating this list in the future.

#1 in my ranking of Christopher Nolan’s films.

I have a bias for movies that at least seem to take space seriously. I think it explains why I put Contact atop my list of Robert Zemeckis movies, and I think it’s why Interstellar is probably going to end up at the top of my list of Christopher Nolan movies. It’s the kind of story that I gravitate towards naturally so that when several movies are at about the same level of esteem in my mind, it’s the space stuff that just ends up winning out. The movie still needs to be good though, and Interstellar is great.

Matthew McConaughey’s Cooper is the exact opposite of The Protagonist in Tenet, which I find interesting and points to why one movie works on an emotional level and the other is more purely spectacle. Cooper has a specific emotional touchpoint, his daughter Murph, where The Protagonist pointedly had nothing specific to drive him to save the world in Tenet. I think it’s a testament to some of the more traditional building blocks of storytelling and utilizing them in intelligent ways can lead to more complete stories.

So, the world is slowly ending. Blight is killing the world’s crops. First was wheat. Soon, okra will be gone. Corn’s days are numbered. Blight, thriving on the nitrogen in our atmosphere is killing our food supply and will soon turn to our air supply. Something must be done, so the remnants of NASA have devised a plan to use the mysterious wormhole that has appeared orbiting Saturn to find a new home in another galaxy. They had already sent through a dozen people a decade before, giving them three potential worlds on the other side of the wormhole that they could colonize. Cooper, a former pilot turned farmer, stumbles onto this plot when a gravitational anomaly in his daughter’s bedroom gives him a set of coordinates in binary for NASA’s hidden base on in old NORAD facility. 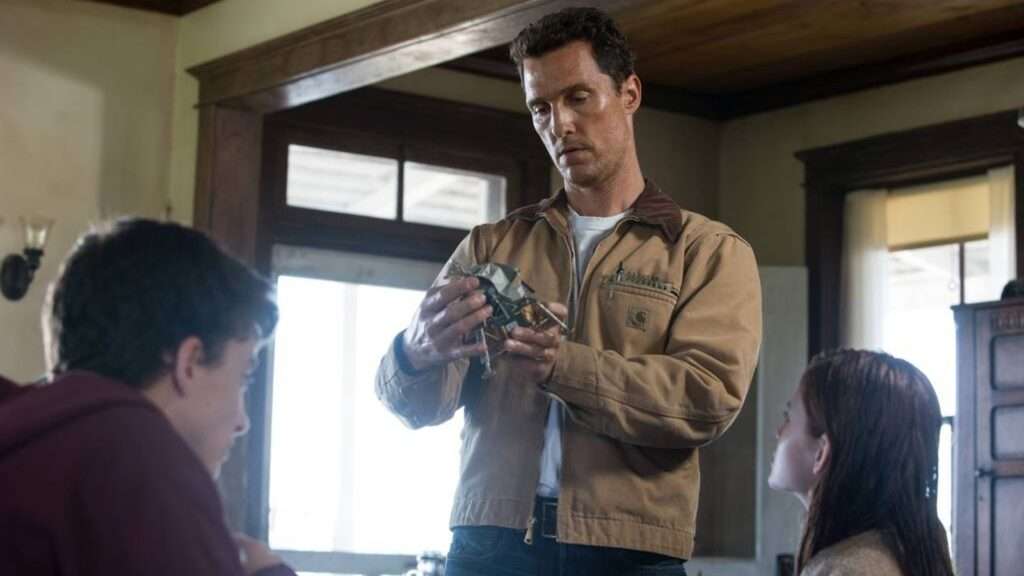 I think this movie ends up working so well in no small part because of how it begins. Nolan takes the time to set up the world, its deteriorating and diminished condition, as well as Cooper’s relationship to Murph which carries him through the entire film. It’s for her that he decides to go on this mission through space and gravity, which guarantees that he’ll miss decades of her life. It’s for her that he wants to return home, to a home where not everyone has died. He’s contrasted sharply with Doyle, one of the other astronauts. With no personal connections, he looks at the problem with the least humanity, feeling that their priority should be the quickest and easiest solution in order to guarantee that they save what they can.

Also on the ship out is Amelia Brand, the daughter of the chief scientist at NASA trying to figure out the problem of gravity that will get them off the ground in great enough numbers to survive as a species. She has a hidden motive: to reach specifically one of the three worlds, Miller’s planet, because she loved him before he left. Her specific attachment drives her just like Murph drives Cooper. 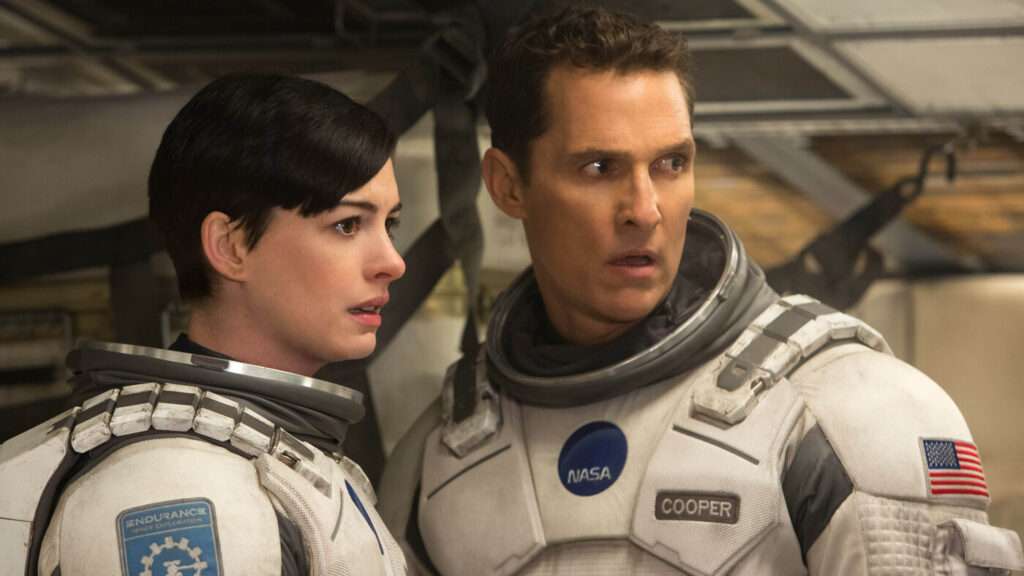 Back on Earth, Dr. Brand takes Murph under his wing, getting her into college to pursue an education in physics that is in short supply because the needs of the world are so centered on growing food. She grows into a woman and chief student of Dr. Brand, eventually learning that Dr. Brand had known for decades that there was no solution to the problem of gravity, and that there was never any hope for anyone left on earth. Colonization needed to happen with frozen embryos that the ship carried with it to the other galaxy. In her mind, her father left her to starve and die.

This movie has a lot of moving parts, and I haven’t even gotten to the three planets, but Nolan handles it so deftly that it’s easy to avoid feeling overwhelmed. Nolan has such command over the story and its cinematic rollout that one can lose yourself in the story without ever feeling confused. Combined with the embrace of time mechanics as Cooper’s adventures with gravity slow time for him, the movie keeps the different threads extremely clear as they progress at different speeds towards a single conclusion.

In terms of the movie’s treatment of space, this is where the realistic approach to filming the special effects, with an emphasis on camera placements that are attached to ship hulls, really helps enhance the film’s sense of scale and danger. We can hear the rattle of the different parts of the ship scrape and hit against each other as the ship enters the wormhole. When the Endurance passes Saturn, it feels tiny in comparison. When Cooper takes the Ranger into the black hole at the end, it feels terrifyingly huge and dangerous.

The first planet they visit is a water planet that stretches time by a couple of decades and shows them a planet void of any life despite the presence of water. The second planet is Mann’s planet. Dr. Mann was the best of the twelve, the leader, the one who inspired the original group all to go, and his data on his planet was promising and closer to the first planet than Miller’s planet. The time on Mann’s planet was shown in trailers, but Mann himself was completely hidden. Played by Matt Damon, he ends up being the manifestation of what Amelia Brand described as nature being violent and overwhelming but not evil. The only evil we can find out among the stars is what we bring ourselves. Mann faked all of his data because he couldn’t face dying alone. He was completely selfish, as opposed to Cooper’s selflessness centered on his family and even Doyle’s selflessness unmoored from any humanity. 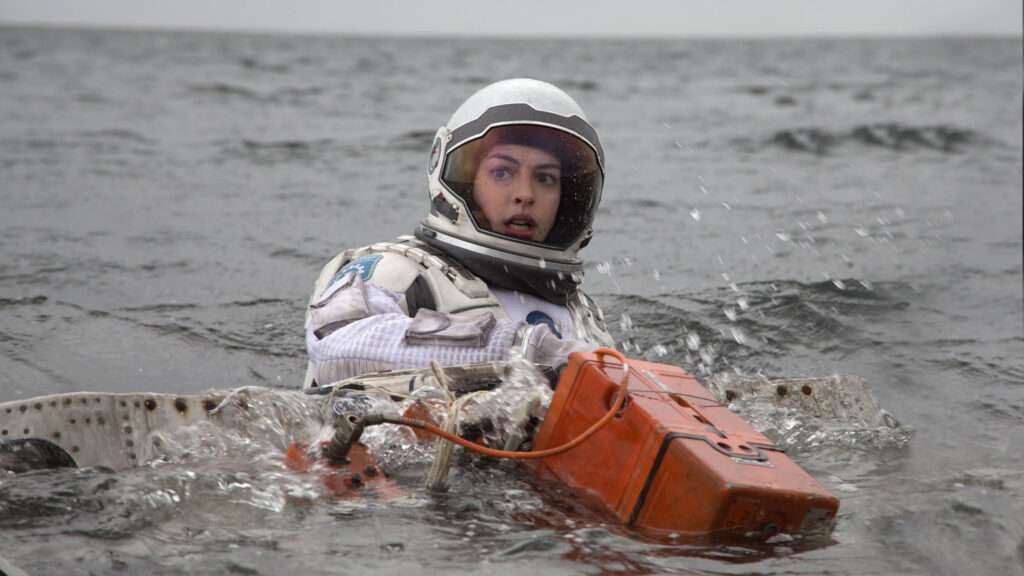 Now, having said all this, I love this movie as it is. The final act in the Tesseract is the kind of heady thing that embraces time mechanics mixed with emotional storytelling that I love, using science fiction to tell a human story. This also represents Nolan’s response to Stanley Kubrick’s 2001: A Space Odyssey. Nolan obviously loves Kubrick’s film, as evidenced by his efforts to have the movie restored for 4K and his many public comments praising the film, but, watching Interstellar, it feels like he has a certain fundamental disagreement with 2001, especially the ending. 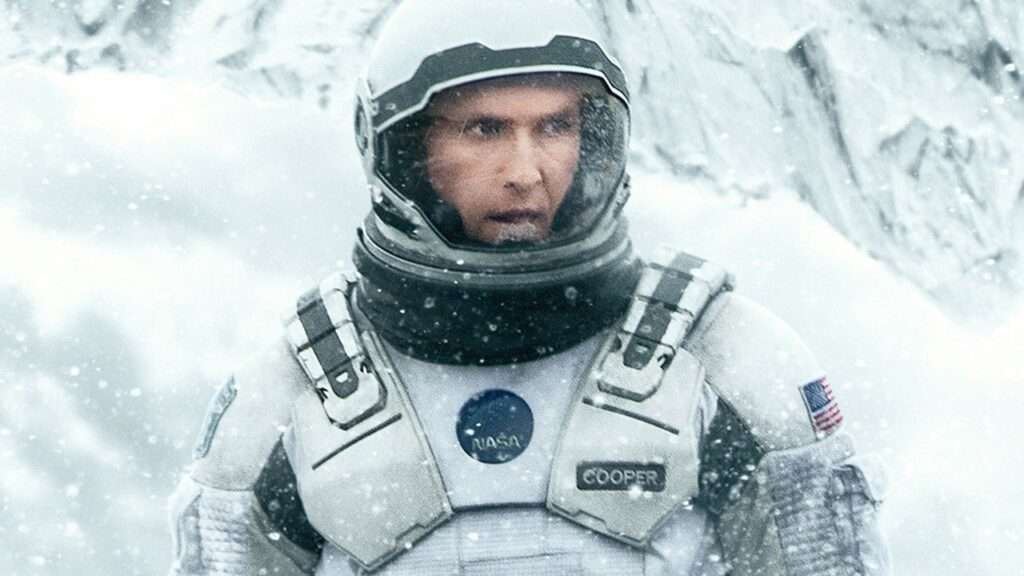 In Kubrick’s film, humanity evolved through Dave Bowman becoming the Starchild after passing through the Stargate. In Interstellar, Cooper remains decidedly human after passing through the black hole and the Tesseract. There’s no great evolution. We’re still human. When he finds himself on Cooper Station, dozens of years after he had originally left, boys are still playing baseball and cheering when they hit a flyball through someone’s window (in a circular design that directly evokes Rama from Arthur C. Clarke, who co-wrote the script for 2001). We can save ourselves as we are, Nolan seems to be saying. We don’t need some outside force to take us another step in evolution. We have it in ourselves to take us further. There are other callbacks to 2001 including the use of Saturn (which Kubrick wanted to use late in production instead of Jupiter, but his special effects team rebelled and kept it as Jupiter) and the overall structure of having the Tesseract in place of the Stargate. I love both movies, and Interstellar is great, but it’s not quite 2001: A Space Odyssey brilliant. 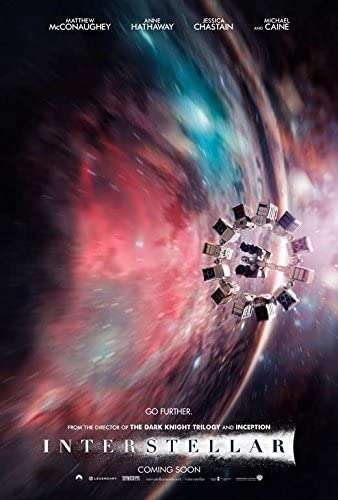 I think this is Nolan at his height. Technically, the movie is at the top of the heap of cinema magic. Narratively, Nolan found a way to keep the stakes of the movie small enough to understand but still tied to a larger problem. In terms of performance, Matthew McConaughey is probably the best leading man Nolan’s ever worked with, imbuing Cooper with such pathos as to invite real emotional connection. Anne Hathaway gives it her all as Amelia. Jessica Chastain is wounded and proud as the adult Murph. Hans Zimmer produces one of his best soundtracks using a huge organ at its core. This is Christopher Nolan exploring his cinematic loves at the height of his power in Hollywood, able to turn a heady science fiction script into a rousing and even touching adventure through space and time that made gobs of money at the box office. This is really why I love Christopher Nolan as a filmmaker in general.