Can a Half-Naked Marine Vet Survive a Zombie Apocalypse? (Review)

“A terrorist attack at the San Ysidro border has unleashed a terrible plague across the state of California. Homeland Security, the police, National Guard, and military have been wrecked as they wrestled to quarantine and control the outbreak. Everything south of Los Angeles has been overrun with the majority of the populace directed to flee north to find safety.

In the town of Paso Robles lies National Guard base, Camp Roberts. An old World War II training base now turned into a refugee camp. 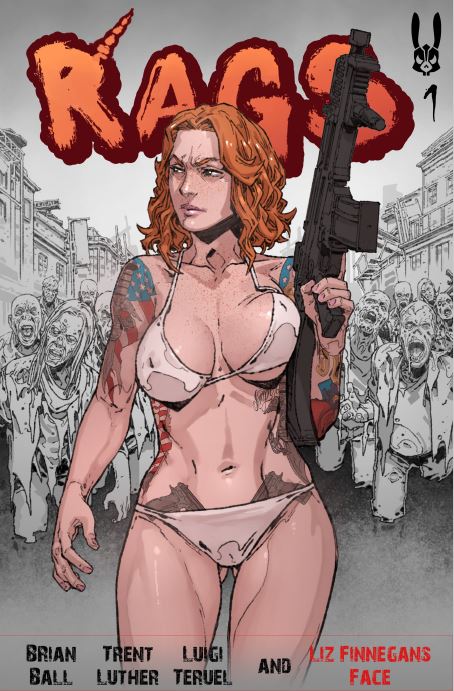 When we begin issue #1, Regina “Rags” Ragowski is a tattooed, former US Marine (with an other than honorable discharge – pending status change) that’s dressed only in a bikini bottom and laid out flat on her back with a bloody nose surrounded by a group of survivors pointing guns at her. By reading the preceding zero issue, we understand only SLIGHTLY better how she wound up in that predicament, but it isn’t necessary to get engaged in this story and issue #1 goes back in time to when she lost her clothes in the first place.

This group of survivors is dug in at an abandoned department store watching hordes of zombies outside. Rags has just made her way inside the store and was met with the butt end of a shotgun to the face. Now the zombies are closing in and the survivors are trying to figure out what to do with her.

Marine Corporal Regina Ragowski is having a very bad day.

It’s definitely an entertaining story, and that is in spite of the salty language and nudity that is prominent in this book, but there’s logic behind the ample nudity, and the artwork by Luigi Teruel is exceptional and expressive. A cut above most indie titles. The coloring and lettering is probably average, but otherwise this book is superior to most of Marvel’s or Image’s current output.

If you’re growing tired of seeing heroines duking it out in their skin-tight spandex suits, I think you’re going to come away very impressed with where Rags winds up and what her fighting uniform turns out to be, but that’s for the next issue. Creators Brian Ball and Trent Luther came up with the idea for Rags, by their own admission, during a drunken night of video gaming. From there it was a matter of time and effort to bring Regina Ragowski kicking and cursing into the world of indie comics.

Rags isn’t just another zombie title, but rather it seems to be a character study that’s progressing methodically without pages and pages of exposition to explain everything to readers. The unspoken character in this story is the PTSD (Post Traumatic Stress Disorder) that Rags appears to be suffering from, just like many members of the armed services regularly struggle with who’ve experienced combat situations. This angle works surprisingly well and is handled deftly by first-time writers Brian Ball and Trent Luther.

Ball and Luther have done what surprisingly few creators have managed to do; create a protagonist who is dealing with serious issues following her military experience and she is clearly still dealing with this disorder. This character, like all the best ones in literature, is flawed. And she tends to strike out at anyone who questions her. 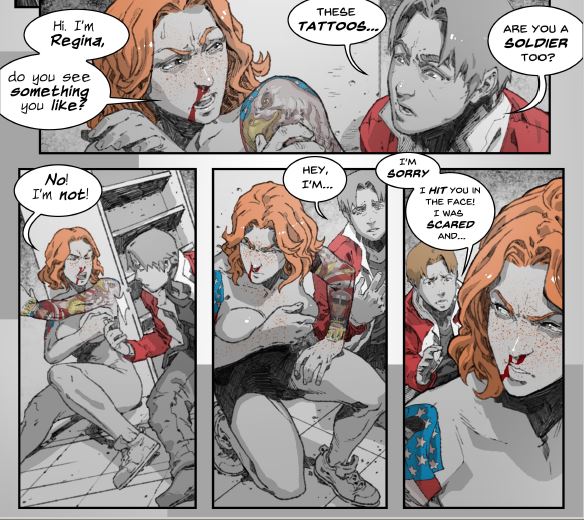 I understand that Rags isn’t for everyone, especially those offended by profanity or nudity or even those who think we’ve reached ‘peak zombie media’, but for those who check it out, you won’t be disappointed. Antarctic Press has just picked it up, so expect to see it available in Previews very soon. Until then, you can get copies via the links below. I recommend you pick this up.

The face behind Regina “Rags” Ragowski is Liz Finnegan, a snarky Twitter personality with an easy on the eyes appearance and a similar disposition online.