2022 finds me at the local AMC yet again, this time to snag a 5pm showing of Studio Chizu’s Belle, directed by the seasoned Mamoru Hosoda (Wolf Children). I did some article blurbs here on Bleeding Fool last year leading up to its release, and now that it has arrived in the states it was time for me to actually watch the film I had been keeping tabs on over Summer and Autumn.

The story opens with an introduction to U, an advanced social medial platform, directed at the audience like an ad, stating that one can be a new ‘you’ in U, and that it is a place for second chances, sporting over five billion users. U in execution is like an MMORPG meets Twitter.

U is populated by advanced avatars based off of scans of a person’s general appearance, but also potentially off of a psychological profile that is somehow glimpsed as well during the scan, the end result often being attractive, or unique in appearance, but not always.

The audience is introduced to the avatar of the protagonist, Belle, singing on a floating whale covered in speakers traversing a vibrant cityscape occupied by thousands upon thousands (Possibly millions) of colorful characters. Then we are plunked into real life (and 2d animation), finally shown our protagonist in the flesh, the withdrawn Suzu (Kylie McNeill in her debut role).

Following Suzu through her high school days we are introduced to her childhood friend, as well as crush, Shinobu (Manny Jacinto, Maliski from Trese – 2021) and her urbane best friend Hiroka (Jessica DiCicco, Shigeru Kamado from various Demon Slayer media) forming her inner circle.

Suzu’s outer circle is comprised of quirky kayaking enthusiast Shinjiro Chikami, who goes by Kamishin (Brandon Engman, Morishima Hodaka from Weathering With You – 2019), and strangely, the most popular girl in high school, Ruka (Hunter Schafer, Jules Vaughn from Euphoria 2019 – 2022). 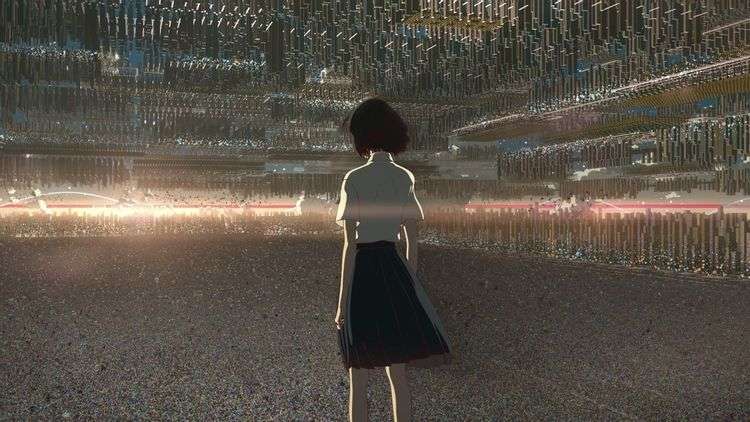 We further learn that Suzu’s mother died saving a child from being washed away in a river that was flooding, Suzu being six at the time and witnessing this tragedy first hand has left her with emotional issues she’s still battling with in the present, namely being able to sing.

Known for having a pretty voice among her peers, Suzu finds it hard to sing as every time she does she is reminded of her mother who encouraged it, which then reminds her of her death, spurring episodes of intense anxiety. 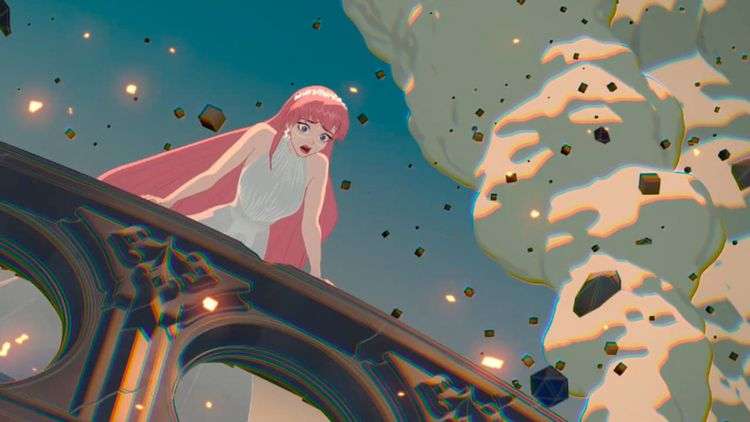 After an incident where she is put on the spot at karaoke, Suzu flees, vomiting on her way home. Hiroka prods Suzu into trying out U as an escape, and when she does, she uses a group picture where she and Ruka are in close proximity, causing her avatar to generate a face that is a composition of both; Ruka’s beauty, and her freckles.

Suzu’s name meaning ‘Bell’, she names her avatar Bell and enters U. She finds that she can sing without anxiety there, and performs a whole song without accompaniment in what constitutes a crosswalk in the virtual city she appeared in.

At first met with passivity and criticism, the following days Suzu finds that she has garnered a following, one that is growing fast, her performance recorded and spread across U as well as the internet at large.

With help from Hiroka, who is more than a little savvy with computers and social media, Suzu is able to build on her avatar’s celebrity, singing more intricate, musically accomplished pieces, while also keeping her identity a secret as all earned income from her exploits are immediately donated to charity.

Her fame continues to grow, reaching such heights that she is able to hold a concert viewed by millions online. Enter ‘The Dragon’ (sorry, I couldn’t help myself), a grotesque avatar with bruises on its back, crashing the concert with a wild conflict between Justin (Chace Crawford, Kevin Moskowitz / the Deep – The Boys) and The Justices, a group of vigilantes unofficially policing U with the ability to dispel an avatar, revealing the identity of the person behind it. 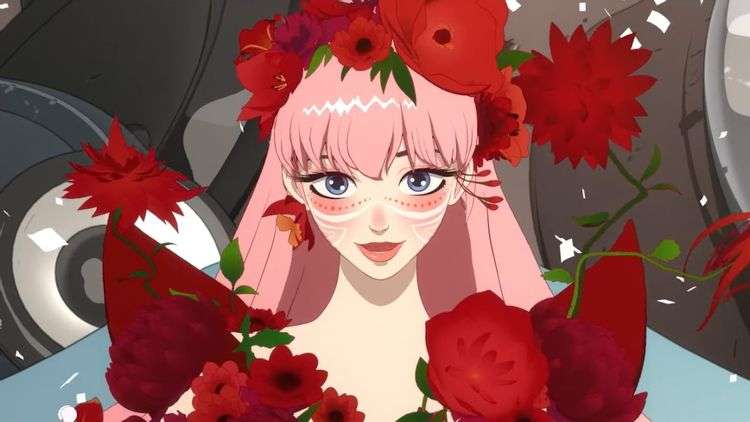 The Dragon (voiced by Paul Castro Jr, Rikuya Yoshida – High-Rise Invasion) manages to escape the battle after trouncing the Justices, leaving Justin, the audience and Bell (now referred to as Belle by her fans) stunned.

U and the media at large become enamored with The Dragon, fixated on discovering who is behind the grim façade and violence. Suzu and Hiroka perform their own investigation while the public exposes an artist suspected of being The Dragon as a fraud, who, simply aped the pattern of The Dragon’s bruises in his works.

A professional baseball player is later accused of being The Dragon because he covers up his upper body, apparently, to hide the scars of a violent past. But he reveals to the world that he has scars from numerous surgeries performed on him when he was a child to rid him of cancer.

While speculation continues to fly, Suzu manages to find where the Dragon resides within U at the cost of becoming a target of Justin and his cadre. At first rebuked by The Dragon several times (all of which vehemently), Suzu begins to break through to the person under the avatar, realizing that he is not much younger than herself, and potentially suffering some actual burden outside of U.

Suspicions are confirmed when Suzu and Hiroka finally discover The Dragon’s true identity, getting a glimpse of what he goes through in his personal life at home. This leads to the crescendo of the film stretched out over U and the real world as Suzu puts her own identity on the line in a desperate bid to save the The Dragon.

I won’t spoil the ending here. You will have to buy a ticket for the rest. 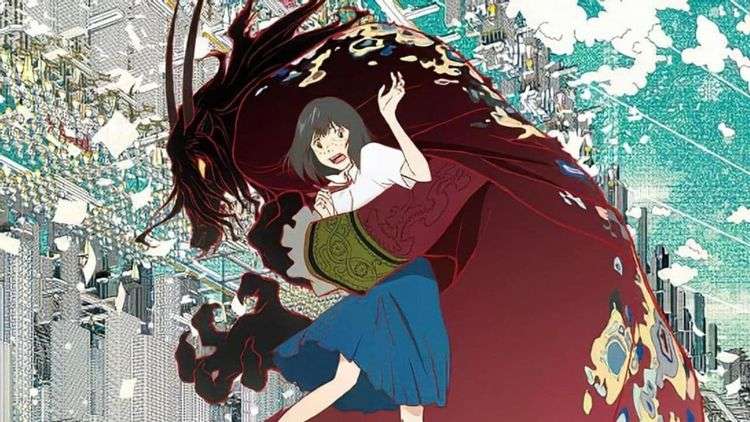 Visually, Belle is the most intricately and impressively delivered piece by Studio Chizu to date, reflected in how they animate the two stages the story plays out on. U is vibrant, 3-dimensional, and glows with coding beneath its colorful objects.

The real world is rendered with an eye for the natural, Suzu’s mountain hugging hometown a 2D recreation of rural Japan, effecting down to earth greens and browns. This helps contrast to realities Suzu moves between, both beautiful feasts for the eyes.

From a storytelling standpoint, it is not difficult to see where Belle pulls inspiration from. It is a Beauty and The Beast story with the Hosoda touch for virtual world building. Belle is pensive though, meditative in how it progresses, falling more in step with Wolf Children than, say, Summer Wars, nor is it as fairy-tale whimsical as its Disney predecessor.

Belle is a smart film in that it knows what it is doing with its plot device of U and what it is doing without it, treating both worlds separately, allowing them to tell similar, but different stories, and not blending the possibilities found in both until the final act. This duality is purposeful, and integral to what Belle is trying to convey.

The film is concerned with the public image contrasted with the private life. The ideal self, or at least the most provocative one put on display, and the person pulling its strings out of sight. The avatars in U are both a persona and a shield for the respective people controlling them, and the threat of having that veneer, that curtain, ripped away is what gives the antagonist in Justin a certain intimidation, or weight.

He cannot hurt you, but he can expose you.

Any invasion of privacy is horrifying because it can bring embarrassment, shame, judgment from others, or all the above. Belle addresses this horror by illustrating brutal honesty, and courage in the face of exposure.

Belle tells us that healing or strength isn’t found in what we try to hide, or escape into, but in the bare faced truth, and the bravery it takes to be the genuine article before a world fixated on fabricated images.

That is a hard message to broach, but Belle sings it to us with a trembling, sincere voice that is equally hard to dismiss.