Being a lesbian in modern American society proves far more difficult than defeating the bad guys or winning a marksmanship trophy.

The story opens with Batwoman thwarting an bad guy sniper named, “The Rifle.” She dispatches his easily by using her Bat-themed bondage equipment to leave him hanging by a leg from the ceiling of the building he was using as a sniper’s nest. For the sake of plot related reasons, the Rifle manages to get away despite Batwoman only fleeing to avoid a police encounter. Fair enough. Before she can make a clean getaway, Batwoman is confronted by Sophia who suspects her true identity.

The two have a guarded exchange before Batwoman makes off into the night. Kate’s prior relationship with Sophie was first presented in the pilot which showed us how in love they were as cadets at Point Rock, the show’s version of West Point. As revealed in the Pilot, the couple was caught in a compromising position two weeks before graduation. Kate proposed to Sophia to out themselves as lesbians, consequences be damned. Sophia decided she was not ready to face those consequences and denied her sexuality and love for Kate, whose sense of betrayal permeated their relationship over the entire season. 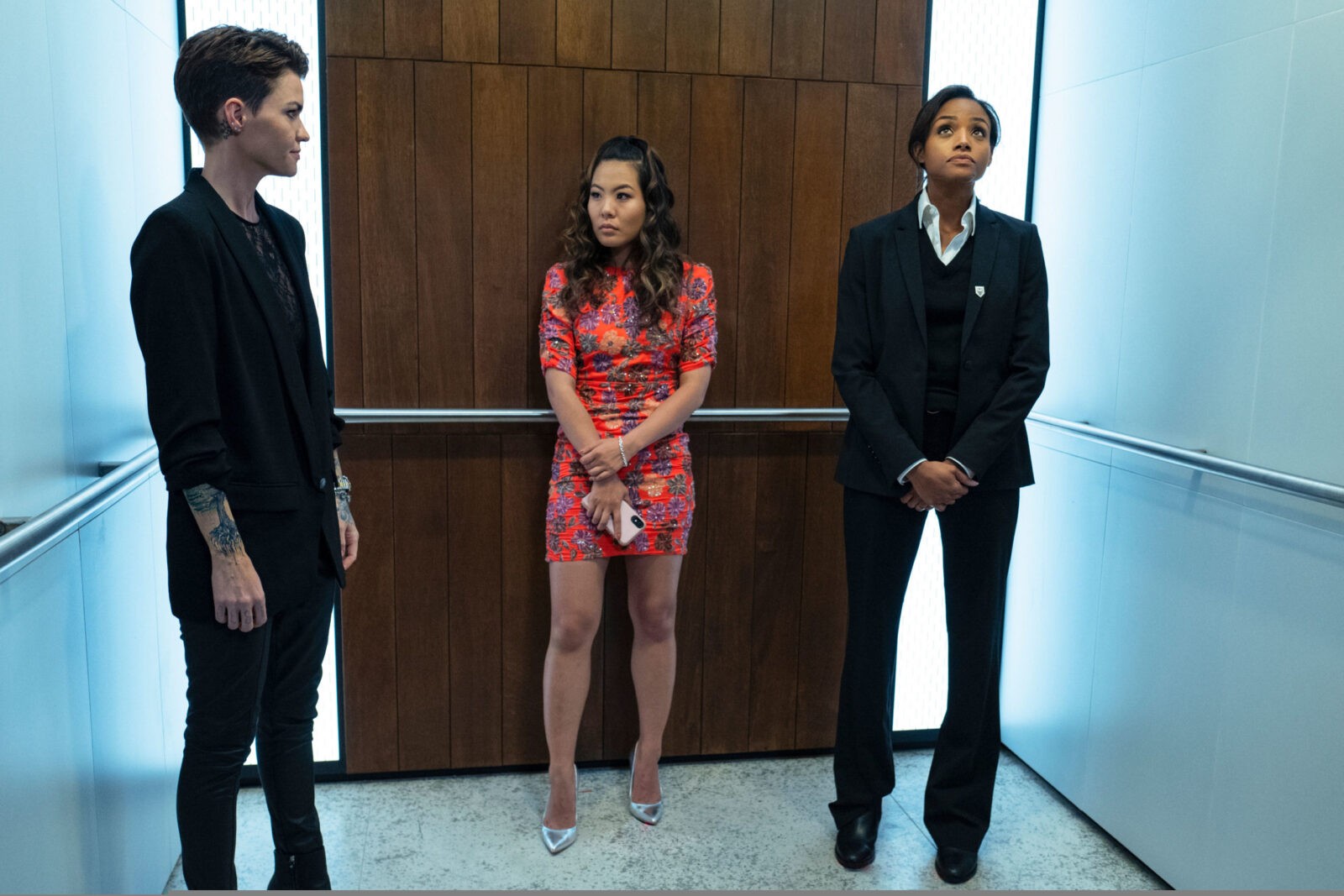 But wait, another love interest soon surfaces in the form of Julia Pennyworth, the daughter of the Batman character Alfred the Butler and another former lover of Kate. The two apprehend The Rifle but instead fall to fighting between themselves over who will bring him to justice and allow him to slip away. After Julia realizes that Kate Kane is Batwoman because of her distinctive style of fisticuffs, the two form an uneasy alliance to bring The Rifle to justice.

The mystery of who The Rifle is or why he is targeting the scientists involved in making the super-gun which could penetrate Batwoman’s armor takes up considerably less screen time than all of the relationship drama. The audience is privy to the meeting of The Rifle with Rachel Skarsten’s, Hatter, who was the one who fired him. Turns out, the Rifle is also under the employ of another villainous female (the show is very femme) named Sofiyah, who wants to see Batwoman killed. The master conspiracy involves the Rifle getting the super-gun after killing the three engineers who created the gun so that he can then, in turn, kill Batwoman at the behest of Sofiyah.

Kate Kane has a romantic dinner with the married Sophie to try to convince her to forget the Batwoman thing, but dinner is disrupted by the homophobic restaurant owner. After leaving the restaurant, Sophie reveals that she sold out Kate at Point Rock on the advice of Kate’s father, Colonel Jacob. Jacob felt that Kate was too principled to ever deny her sexuality, but that Sophie could be convinced to do the practical thing.

In a flashback scene of unintended hilarity, Sophie confronts the insensitive white man who is removing Kate’s marksmanship trophy to tell him just how little effort she put into earning it for the school. Why that was supposed to endear the school or the audience to her character is beyond me.

Another humorous scene. probably intended this time, shows Mary, Kate’s stepsister waltzing into the headquarters of Wayne Enterprises just as Kate is about to enter the Batcave because the single security guard can be bought off with double-whip lattes.

Sophie tells Colonel Jacob of Batwoman’s secret identity, and then responds to a Batwoman sighting. Sophie confronts Batwoman who is, in turn, confronted by Kate Kane in what now seems a classic maneuver for superheroes seeking to protect their secret identity; hire an impersonator. But The Rifle crashes the best laid plans by shooting Julie Pennyworth in the Batwoman costume with the super gun.

Sohie grabs Julia as Batwoman and puts her in a Crows truck to take her to Colonel Jacob who demands to see her despite believing her to be mortally wounded. Kate Kane, also believing Julia to be dying, follows the Crows truck on a motorcycle and fires a handgun into the truck’s tire. The van with Julia inside goes tumbling.

Through no fault of the Kate Kane, Julia emerges unharmed because she was not only able to survive the tumbling van but she also being hit with the super-gun. Turns out, the Hatter was looking out for her sister and had secretly sabotaged the gun. It seems a strange course of action as compared to simply keeping the gun, for she would have been betraying the Rifle in either case. I guess they don’t call her the Mad Hatter for nothing.