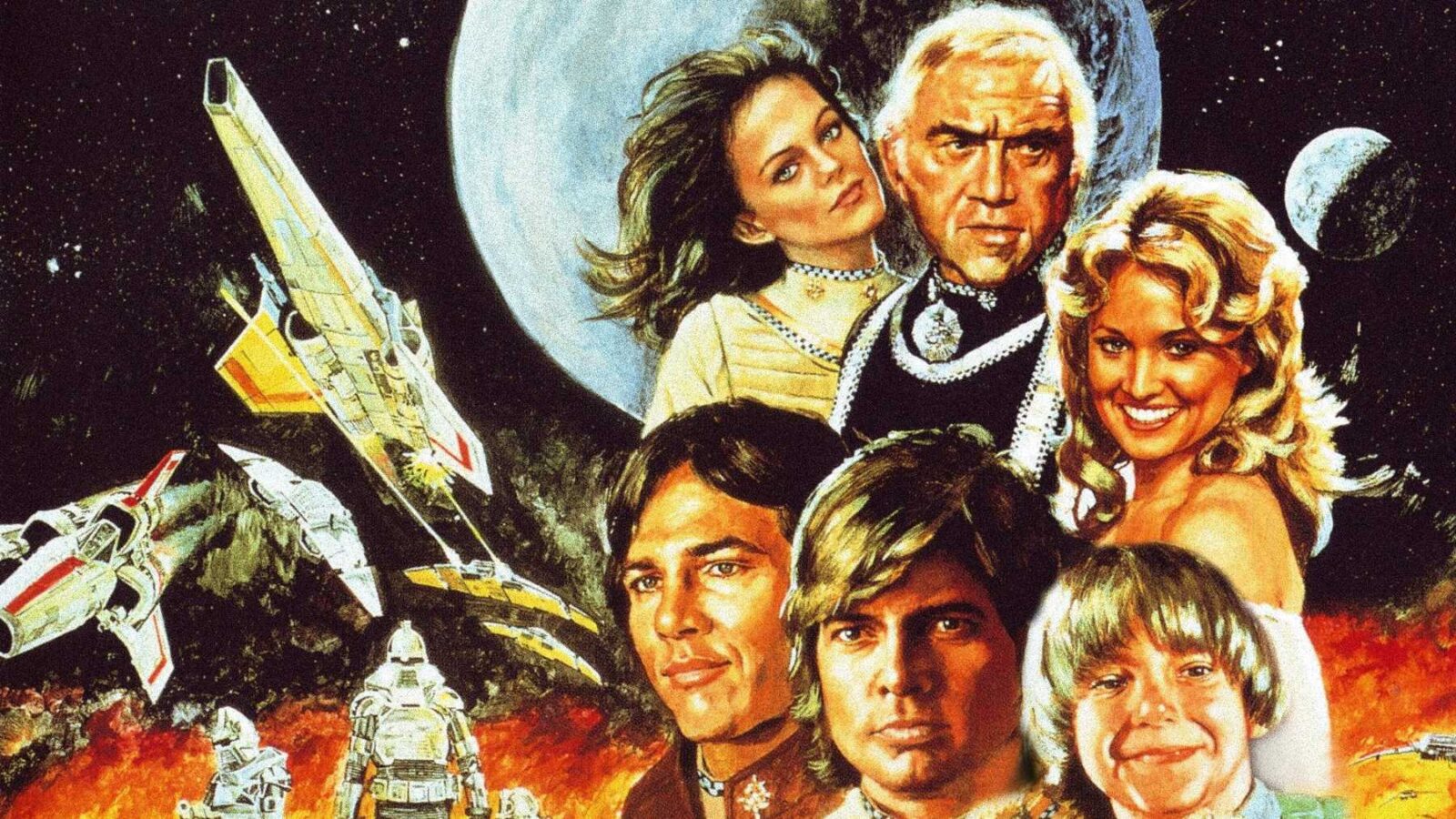 Strange though it may seem, I’ve never done a complete review of the original version of Battlestar Galactica.  I’ve noted the many deficiencies of its reboot, how it served as the template for other SJW enterprises, but I never focused on the show for it’s own sake.

That’s a mistake I intend to rectify because the original Battlestar Galactica is often misunderstood by fans and critics alike. 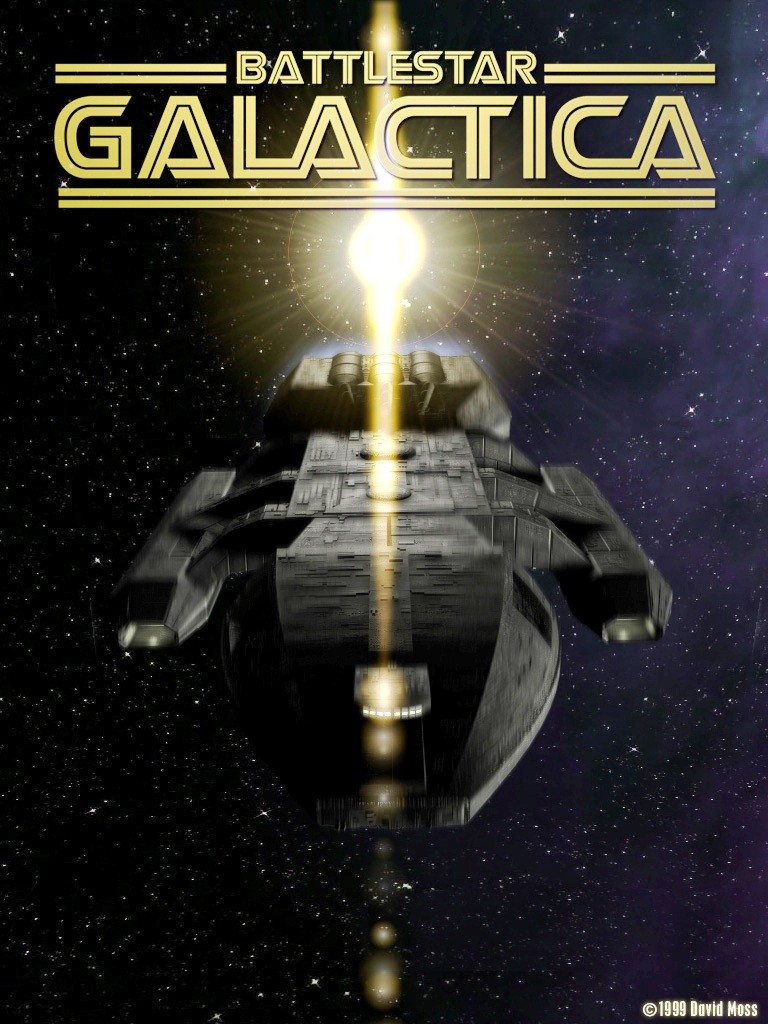 Rebelling Against The Age of Formulaic TV

The seventies were in many ways a creative desert.  The Big Three TV networks vied with one another to create a series of bland, factory-produced shows, all geared to fit particular audience niches.

Battlestar Galactica stood out in this cookie-cutter environment for not only being different from what was currently on, but previous attempts at sci-fi/space fantasy.  The feel and sweep of the show was a complete departure from Star Trek or Space: 1999 (or, for that matter, Lost in Space). 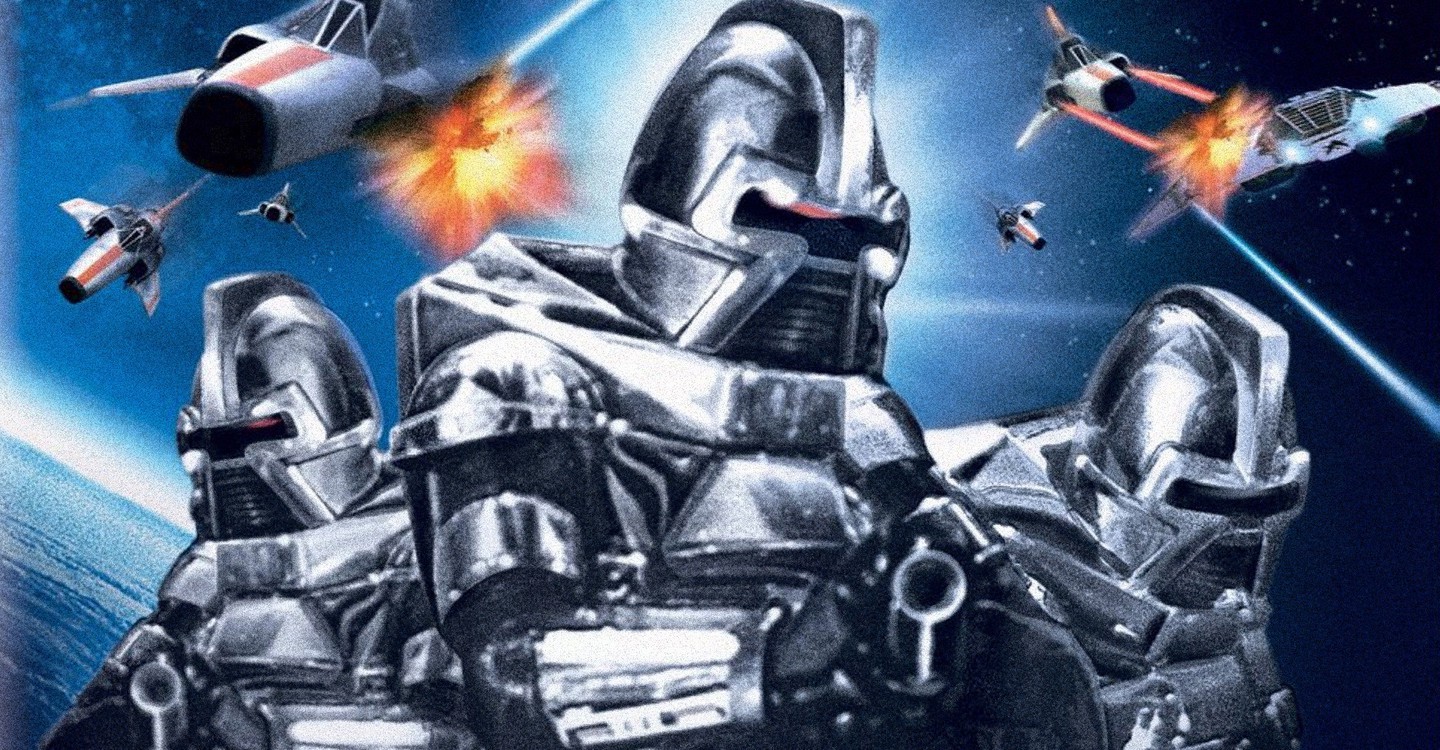 One of the key differences between Battlestar Galactica and the above-mentioned shows was the level of plot continuity and character development.

Other than the occasional two-parter, a core conceit of television shows in those days was that each episode was basically a stand-alone product.  What happened last week was immaterial to what is going on now, and only the most cursory attempts were made at creating continuity.

Though its development (from movie to series to mini-series to regular series) resulted in uneven episode quality, Battlestar Galactica featured an unusual degree of continuity that carried through various plots.  Some of these overlapped, creating an actual storyline that was unique for its time.  In fact, the last five episodes form an intricate story arc, reaching back to episode 15.  The events build on each other and bring the season to a really satisfying conclusion. 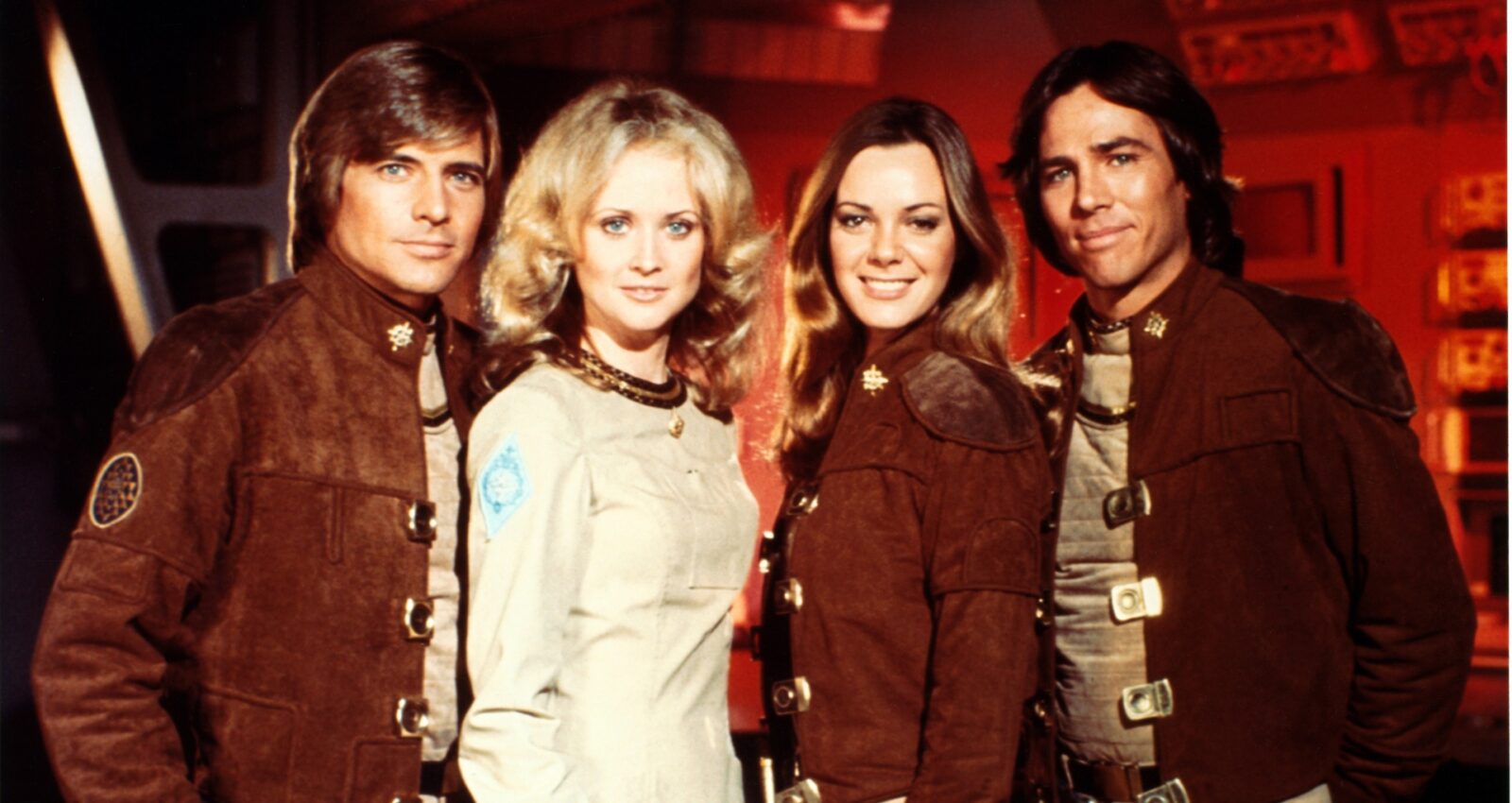 The same was true of character development.  TV characters were supposed to play fixed roles, which generally only changed when cast members departed or the producers decided to goose the ratings by switching things up. 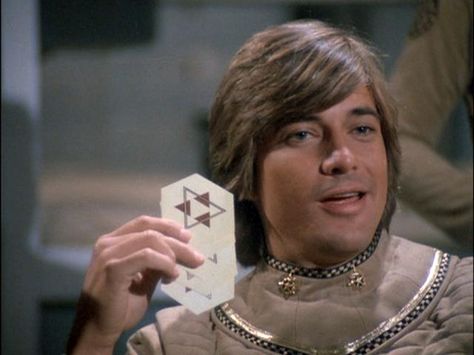 Perhaps no one better exemplifies this than Dirk Benedict’s Starbuck, who is introduced as a feckless gambler, shirker and skirt-chaser but who gradually emerges as the most fully-developed and dynamic character on the show.  Of course, he remains a cigar-chomping fighter jock, but by the end of the series he has matured considerably, something that many modern critics overlook.

Wagon Train in the Stars

Gene Roddenberry originally sold Star Trek as a western set in space, a ‘wagon train in the stars.’   The notion was that a regular cast would meet and overcome challenges from week to week, with plenty of different stories and guest star appearances.

The thing was, the U.S.S. Enterprise never had a set destination.  While nominally on a mission of exploration, it also carried out border patrols and served as a diplomatic courier.  The initial concept never even made it through the first season. 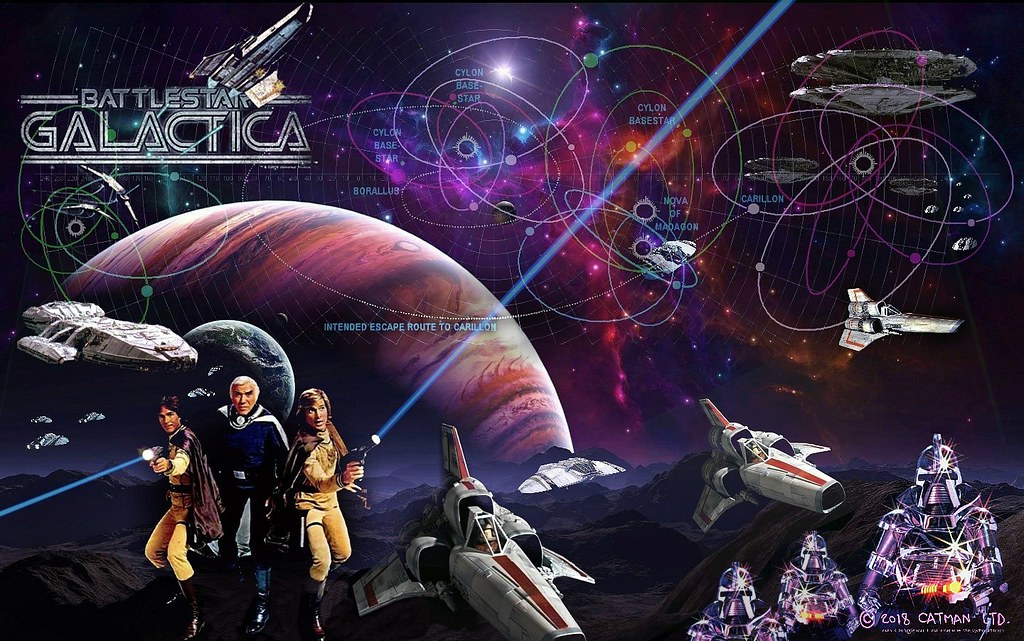 Battlestar Galactica was a much closer realization of this vision.  The Colonial Fleet is literally a caravan seeking refuge from the hostile Cylon Empire and this quest to find “a shining planet called Earth” drives the show. 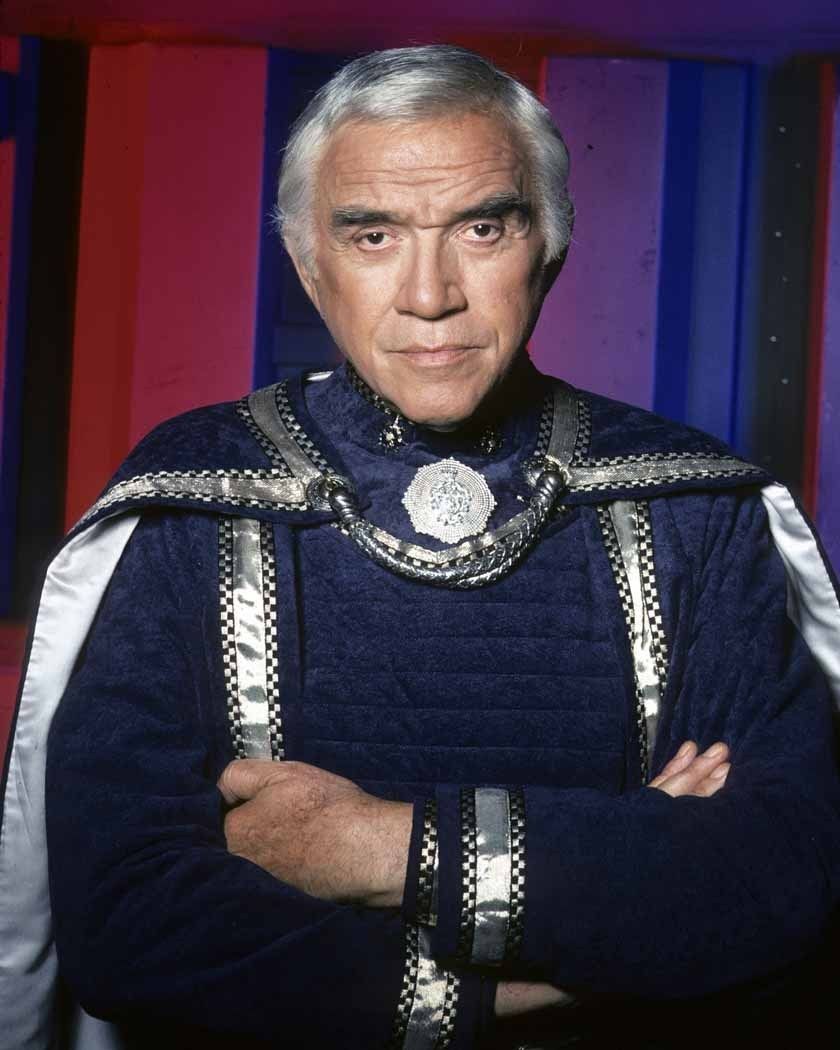 If you’re going to lead a wagon train, who better to do it then Ben Cartwright from Bonanza?  Lorne Green had been playing a patriarch on the classic western show for 14 seasons, and brought a natural sense of gravity and dignity to the role of Commander Adama.  He’s a major departure from Commander Koenig or Captain Kirk, not the least because the widower is heavily defined by his family responsibilities, particularly with his surviving son and daughter. 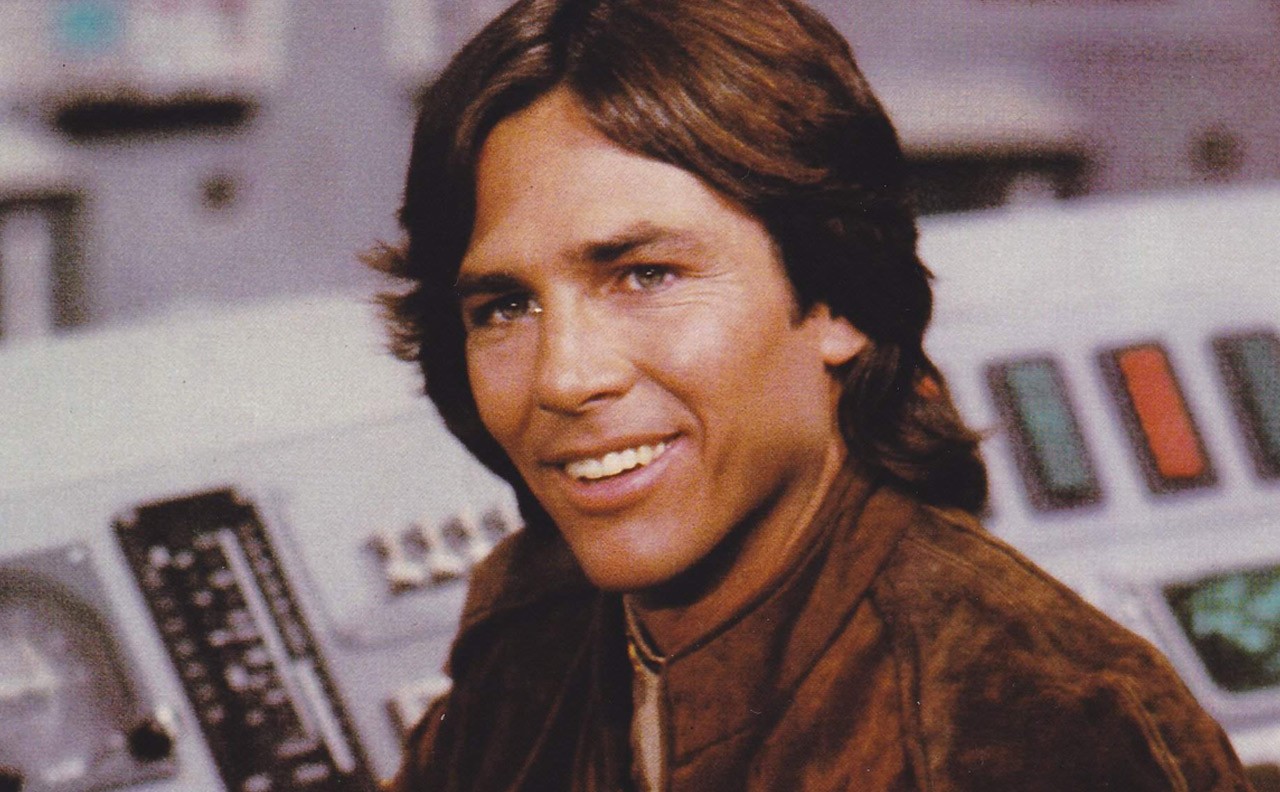 Richard Hatch’s Apollo is the dutiful son and provides a responsible and respectable contrast to Starbuck’s scoundrel figure.  There’s less development with him, though as the show ended there were hints that more would be forthcoming. 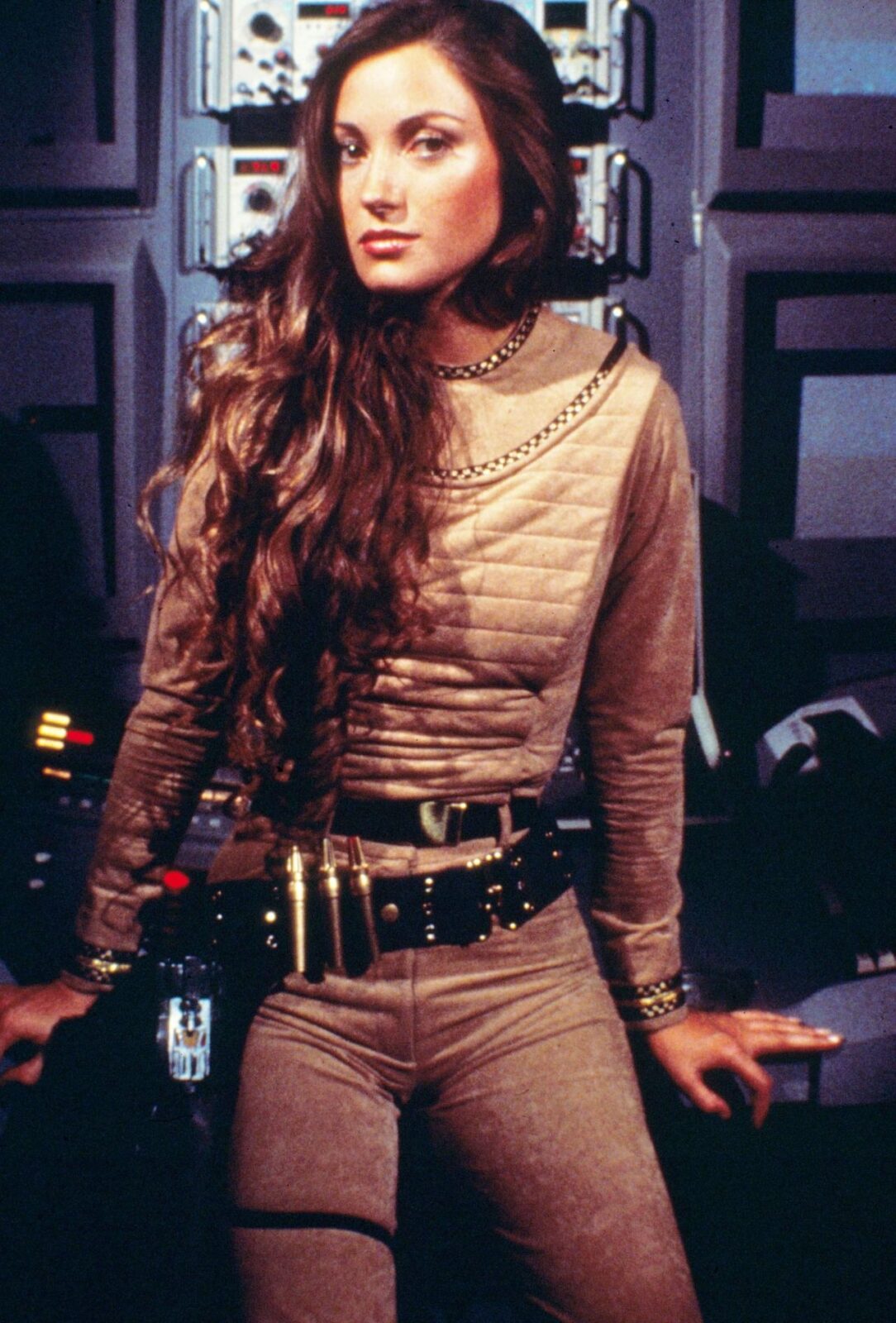 The female roles are also interesting, though the early departure of Jane Seymour from the cast set back what was a promising storyline.

Laurette Spang’s Cassiopeia somewhat mirrored Starbuck’s transformation, going from an elegant courtesan to a world-wise medical technician.  In a western, she’d be a ‘reformed woman.’ 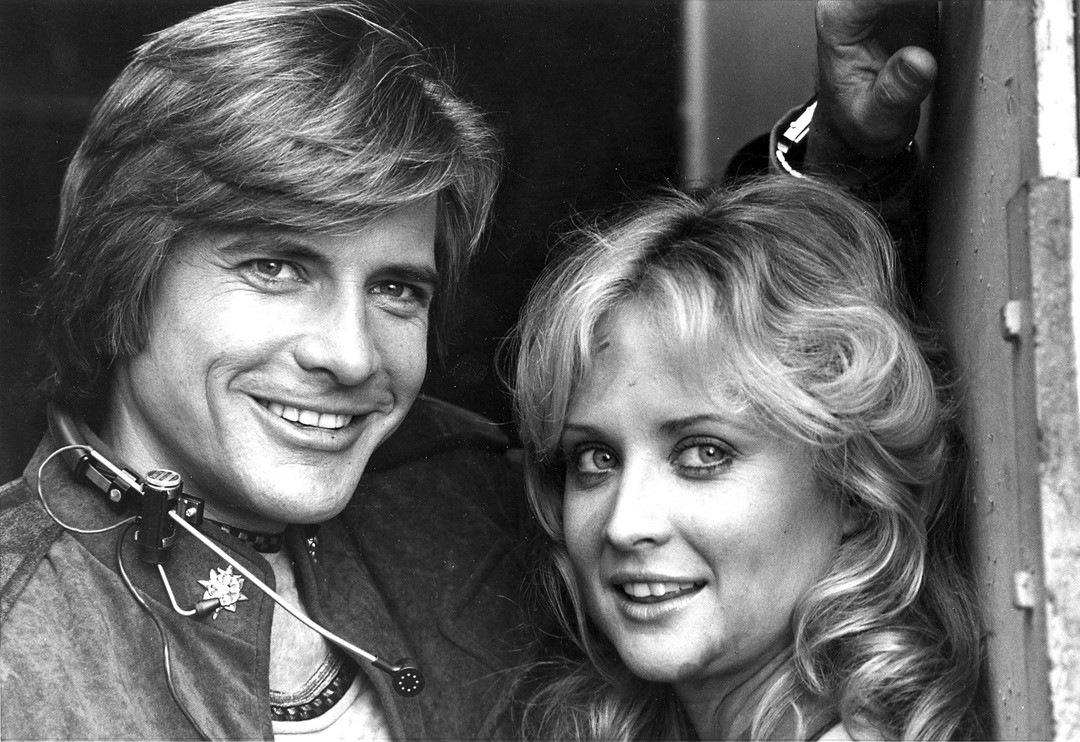 I’ve noted elsewhere that late entrant Anne Lockhart’s Sheba not only provided a replacement for Seymour as a female pilot and Apollo’s paramour, but also link to the lost, then found, then lost again Battlestar Pegasus.  Again, having a guest star become a recurring cast member mid-season didn’t happen often in the seventies. 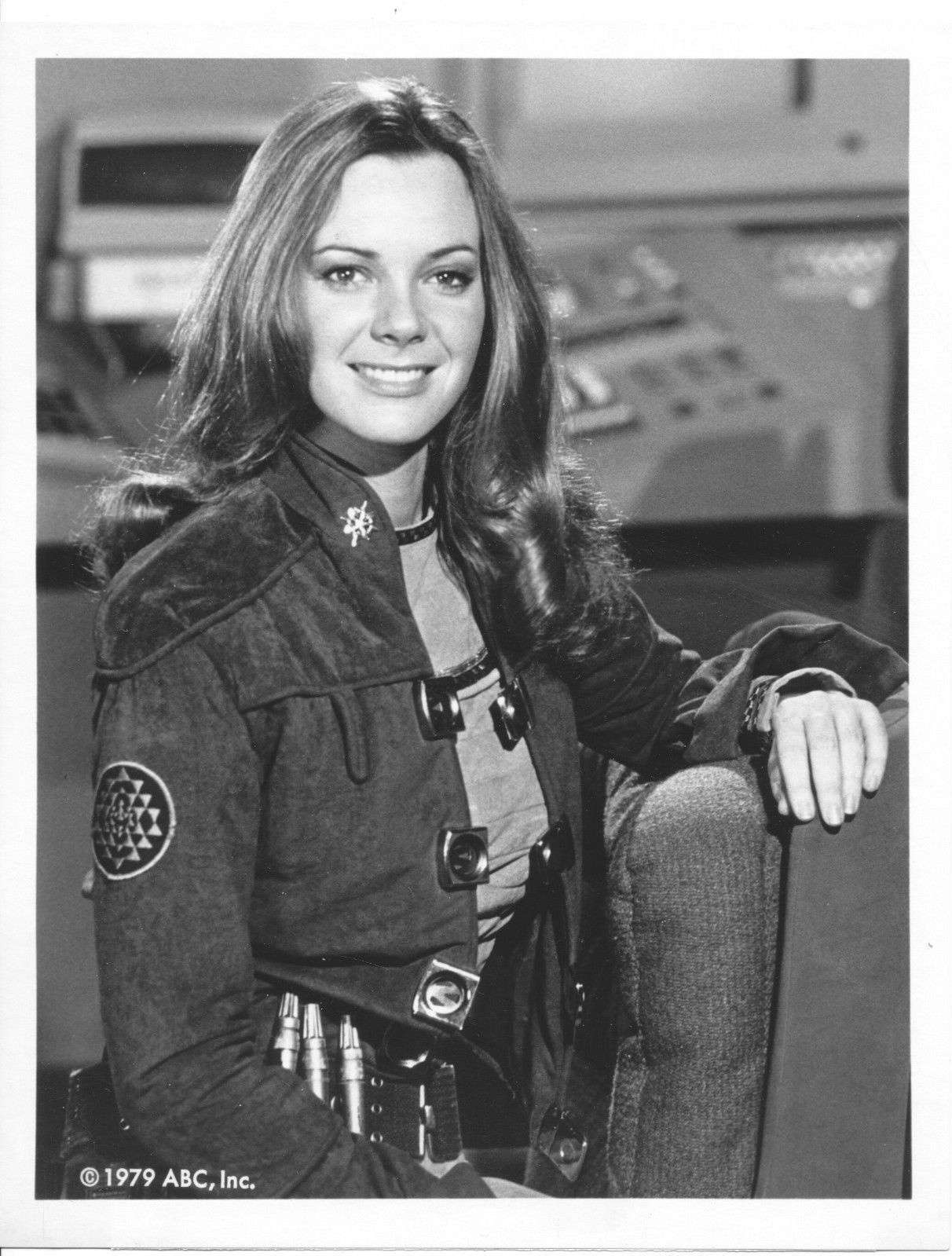 I can’t omit a discussion of the recurring villain, John Colicos’ deliciously evil Baltar.  Colicos is wonderfully devious, setting traps, betraying everyone around him and utterly convinced of his peerless genius.  In another show, he might be a recurring foil who pops up from time to time, but one of the great twists of the show is his capture and subsequent cooperation with the Colonial fleet as he plots his escape. 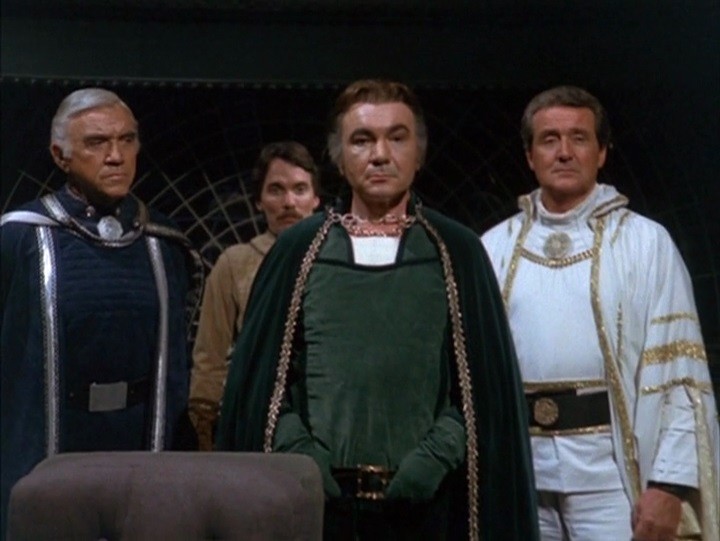 Of course, the show was cancelled after the conclusion of the first season.  Reasons vary, some citing the expense of the show vs its eroding ratings while others claim it was a victim of infighting among the network executives.

There was an abortive attempt to revive it 1980, but the magic was gone and the show quickly tanked.

American television tends to ride a concept to death, and perhaps it’s a blessing that Battlestar Galactica never reached the creative exhaustion that marred the runs of other shows.  (Need we bring up “Spock’s Brain?”) 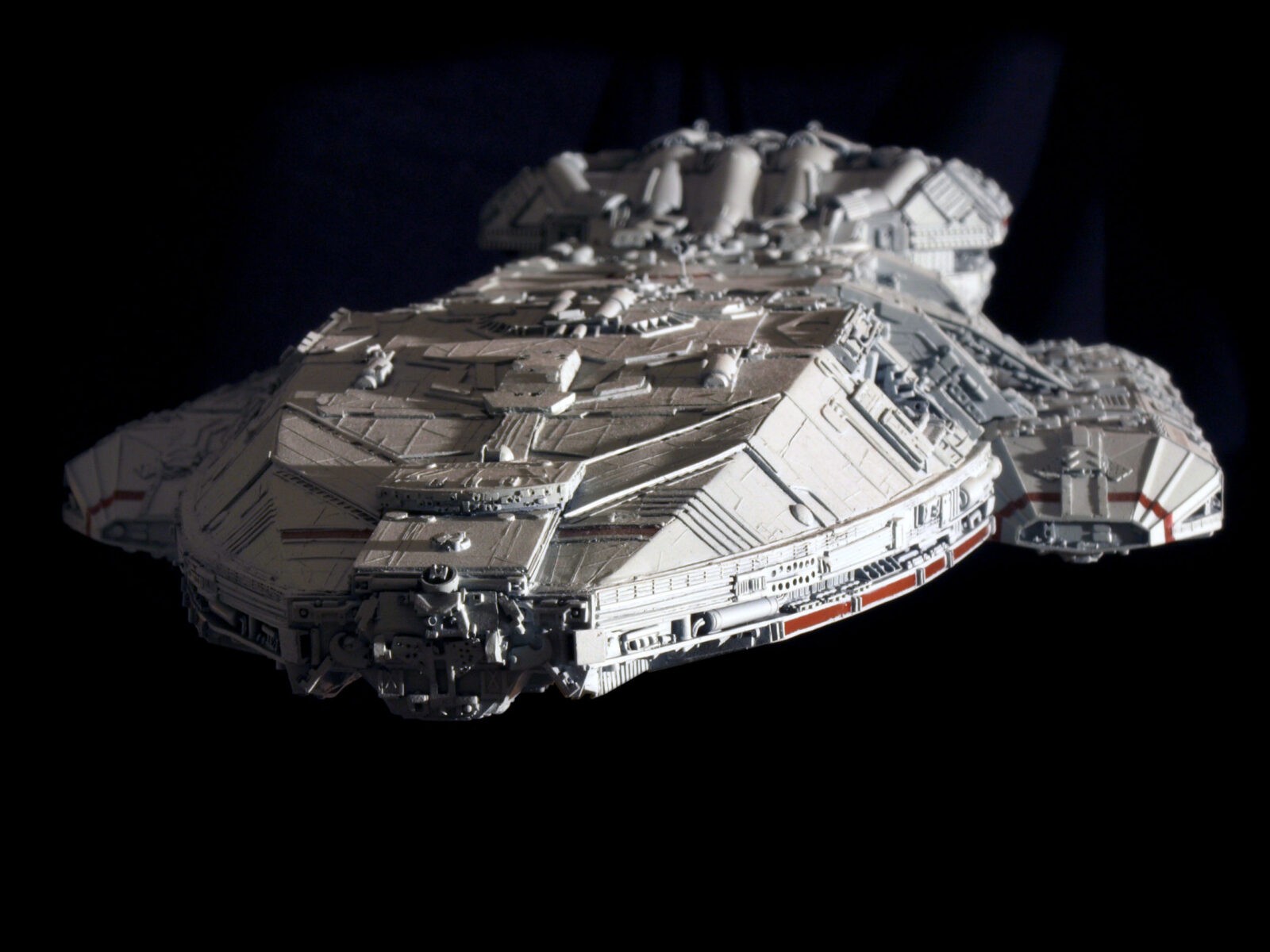 At the same time, the series was definitely finding a rhythm, and we can only imagine how much better it would have gotten with more time to develop the stories and characters.

I think that’s one reason why its fans aren’t hostile to a second attempt, but want it done in the spirit of the original show.  The touchstones were very much those of a traditional western – faith, family and a path to freedom from tyranny.  Any “reboot” that ignores this is missing the point of the exercise.