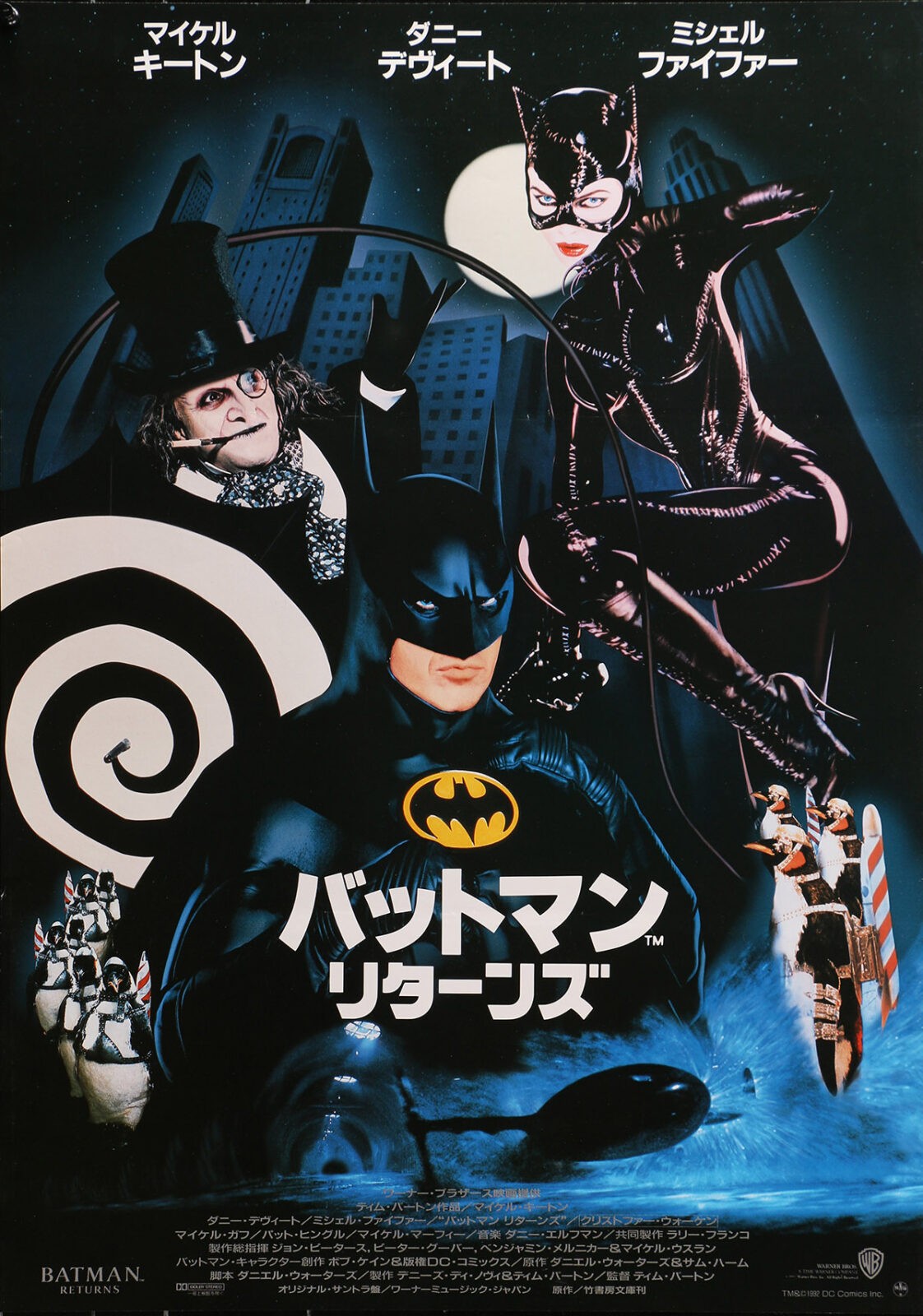 Tim Burton’s first Batman movie was a classic black swan event. Like Star Wars, it was a genre film by a fledgling director whose quirky vision inspired little confidence in the corporate office and the press. Also like Lucas, Burton defied expectations to create a genre-redefining cultural landmark that launched the biggest franchise of its kind.

Frankly, I was a little surprised upon rewatching Batman to find that it held up to my childhood memories. The movie still evokes a captivating mood and tone that no other superhero flick has managed to replicate.

Its sequel, Batman Returns, also elicited the same reaction on a recent viewing that it did when I fist saw it in the theater.

First, some background. Batman  was the work of many hands, including screen/comic book writer Sam Hamm, veteran Hollywood scribe Tom Mankiewicz, producer John Peters, and Burton himself. Peters especially was able to dictate terms to Burton, meaning that the director’s more eccentric tendencies were reined in. The result was a classic pulp Western in a cape.

You don’t direct the #1 DC Comics movie to date and not get approached to film a sequel. That’s where the Bat-franchise and Star Wars started to diverge. Unlike Lucas, Burton had no interest in making a sequel to any of his films. He held out for greater creative control and agreed to direct Batman II once Hamm and Peters were no longer attached to the project.

Hollywood being Hollywood, Batman II was already in pre-production before Burton came back. Hamm had already turned in a first script featuring the Penguin–who’d been cut from the first film–and Catwoman out to steal a hidden treasure. Which makes sense, because in the source material Penguin is driven by upper class pretensions, and Catwoman is a jewel thief.

When Burton took over, he brought in Heathers scribe Daniel Waters to do a front-to-back rewrite. Waters reimagined the Penguin as a sort of anti-Moses figure who is set adrift in a basket, except he’s raised by zoo animals instead of Egyptians. Waters also ditched the treasure heist plot and took a page from every other comic and movie by adding a corrupt business tycoon.

Another bit of background lore: Beloved character actor Billy Dee Williams played DA Harvey Dent in the first Batman with the understanding that he would return to play Two Face in the sequel. Instead, his contract was bought out, and most of Dent’s lines from Hamm’s original script were given to Shreck. That’s why the character often acts more like a corrupt official than a corrupt businessman. The tazing Selena gives him at the end was meant for Harvey and would have turned him into Two Face.

Waters retained the movie’s third villain but started her departure from the classic comic book portrayal.

Sam Hamm went back to the way comic books in general treat women, like fetishy sexual fantasy. I wanted to start off just at the lowest point in society, a very beaten down secretary.

Then Tim Burton came in and stipulated that Catwoman should look like this: 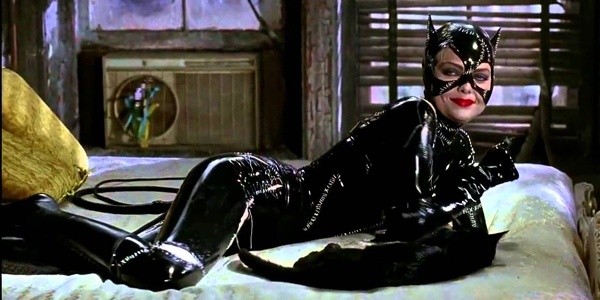 Already we’re seeing the villain creep that critics lambasted the Schumacher films for. Batman Returns has no less than three antagonists, although they’re not who most people think they are.

Because even though she’s a villain, Catwoman is the movie’s main protagonist. She is the character who’s clearly out to achieve a concrete goal.

The characters who put obstacles in her way are Shreck, the Penguin, and Batman. The Dark Knight falls from his place as the first film’s swashbuckling pulp hero to the sequel’s secondary antagonist.

As for DeVito’s Penguin, he’s billed as the movie’s main villain, but he has the least effect on the story. The studio recognized his lack of a master plan and cosigned Waters’ idea of having him kill Gotham’s firstborn sons, but Batman foils his plot with such summary ease that it never generates dramatic tension. In fact, all of the Penguin-related conflicts lack suspense. To his credit, he does deliver the movie’s best lines. They pale in comparison to Nicholson’s Joker, though.

Quick aside: Batman Returns is beautifully photographed. The phrase “every frame a painting” definitely applies. 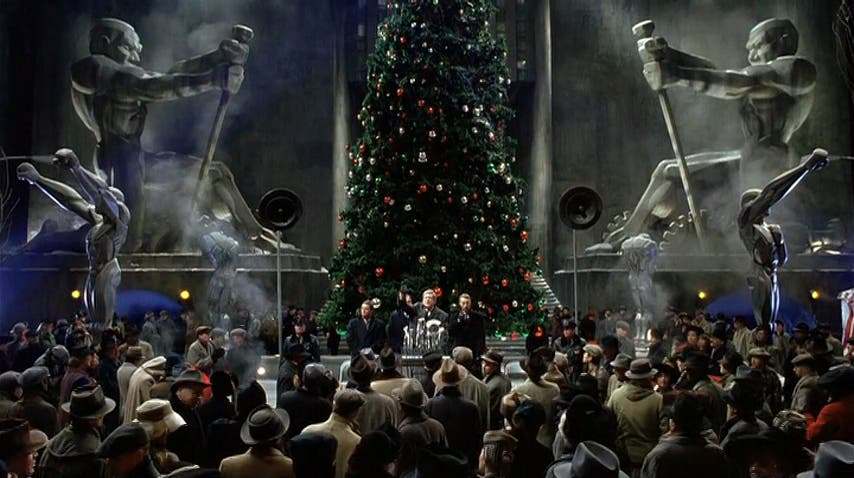 Even still, the sets are plagued throughout with a weird feeling of shrinkage. They seem smaller in scope than the sprawling Gothic canvas of the first film. This is probably due to the departure of Production Designer Anton Furst, the only member of the original Batman crew to win an Oscar.

All of that might have been forgivable had Batman Returns featured a coherent plot. Instead it’s a mess of “and then” plotting and disjointed Burtonisms. Why does Gordon say that the Red Triangle Gang is “back” immediately following their first appearance? How did the Penguin get the plans for the Batmobile? Why does falling out a window and getting licked by dozens of cats (I am not kidding) give Selena Kyle Olympic-level gymnastics ability and nine lives? Why does Batman reroute a penguin-based missile attack (again, this is real) projected to inflict 100,000 casualties to the Penguin’s lair while he is fighting there?

You won’t know, but Michelle Pfeiffer’s 34-year-old pleather-sheathed legs might keep you from caring.

Let’s compare: Batman is a moody, pulpy Western about a driven hero confronting a truly wicked villain who’s just as ruthless in his pursuit of evil. The story fills the lulls in the action with copious amounts of character, so the end result feels like a nonstop thrill ride.

Batman Returns is a self-indulgent, subversive feminist allegory that, when it can wrangle its ADD, focuses on a ball-busting villain protagonist facing a crowded roster of antags that includes the first movie’s hero. The checkbox-style action set pieces and muddled motivations make this picture a grind to sit through.

And never forget, it gave us this: 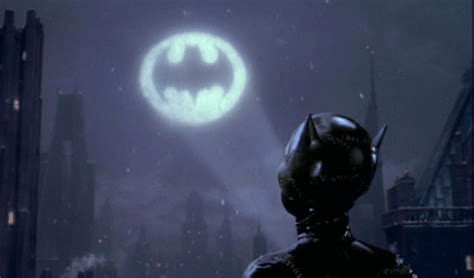 Which ended up leading to this: 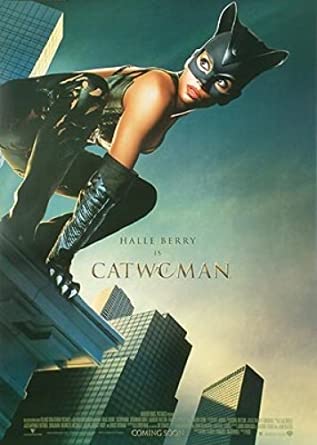