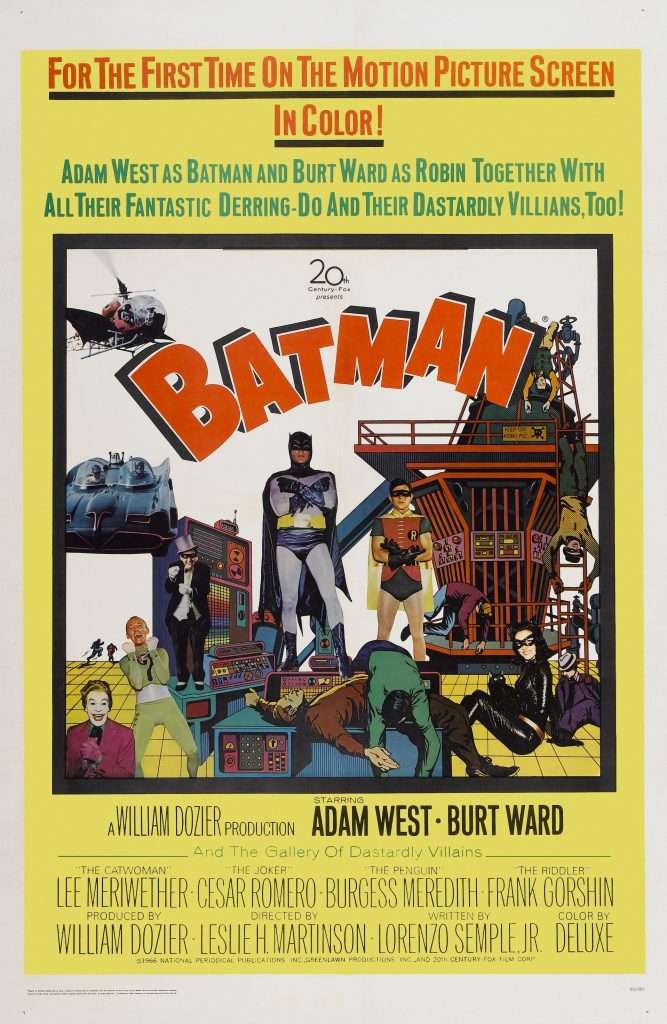 #9 in my ranking of theatrically released Batman films.

Made following the successful first season of the television series starring Adam West as the Caped Crusader and Burt Ward as the Boy Wonder, Batman: The Movie is the perfect distillation of what made the show so much fun to watch. Taking the dark, brooding character and giving him the fun, goofy take that the comics of the era had embraced, show director Leslie H. Martinson and writer Lorenzo Semple brought together as much of the cast as possible (with the only notable exception being Julie Newmar) and created an infectiously amusing tale of adventure.

While watching Batman & Robin, it was obvious that Joel Schumacher both wanted to make an episode of the original show and also didn’t quite know how to pull it off. The key, I concluded, was the effort to give real emotional stakes to what was effectively just a silly demonstration of special effects and hamming it up performances. Martinson and Semple, thirty years earlier, understood much more intimately what a feature film version of a silly show needed to be. It needed to be bigger, longer, and still just another adventure. The stakes could be higher in terms of overall peril, but it’s not the kind of story where you get your main characters to question their partnership or deal with the near-death of a close friend. No, you just have them go on an adventure. 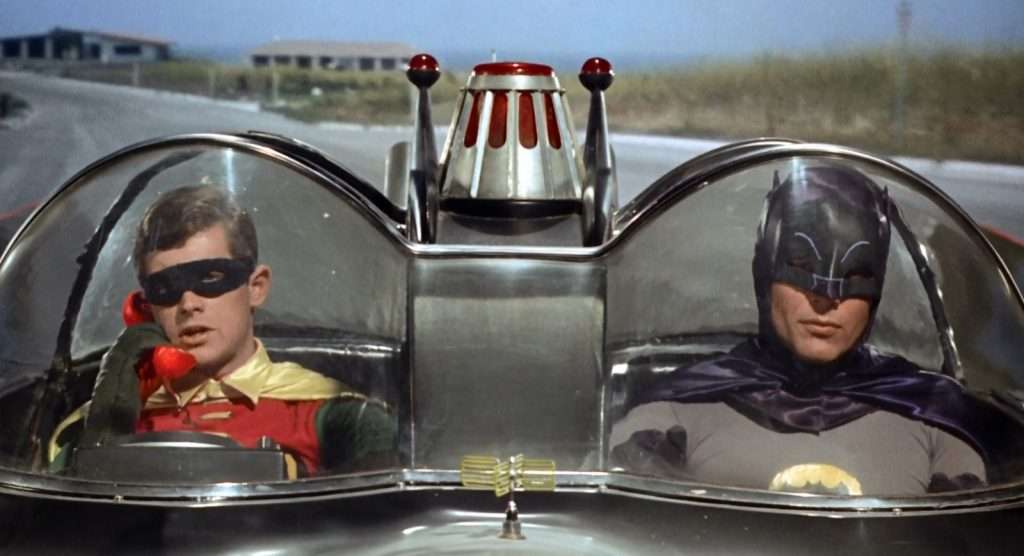 The plot of the film doesn’t matter that much, but it’s essentially that the four main villains of the show (Joker, played by Caesar Romero, The Penguin, played by Burgess Meredith, The Riddler, played by Frank Gorshin, and Catwoman, played by Lee Meriwether) have come together to follow through on a dastardly plot. They’ve stolen a device that can instantly turn people into piles of sand, removing all of their water in the process (apparently designed for whiskey somehow?), and they will use this to attack the United World Organization’s Security Council. Now, my only real gripe with the movie is that it really does feel like a two-part episode of a television show without the stingers and commercial breaks rather than a single 104-minute long film. The first half is dedicated to Batman and Robin figuring out that the four are working together and that there is a plot, but what it is remains hidden in the second half. It seems as though the studio, Fox, could have just given the show back to the network at any point with the understanding that it becomes a two-parter, and little would have been done in the editing bay to make it happen. It kind of makes sense when the film was written by a guy knee deep in the mechanics of writing 50-minute long television episodes that his method of writing a 100-minute long film would be to have two 50-minute long episodes back to back. 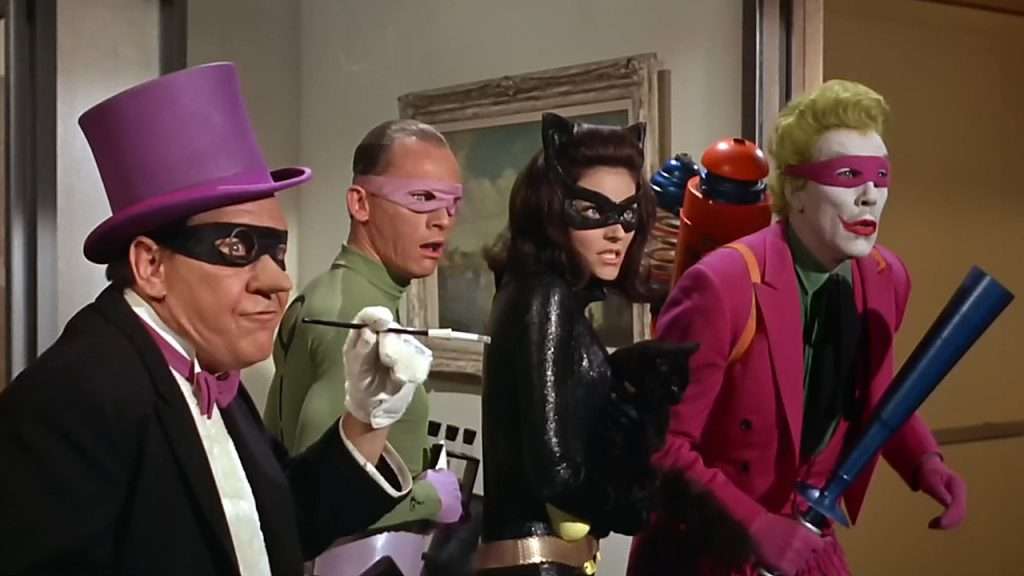 There are plots and ploys and schemes abounding throughout the runtime, providing our dynamic duo with plenty of opportunity to get into and out of trouble, and that’s where the real fun of the film is. This film is first and foremost a comedy, and the main key to it all is the performances of Adam West and Burt Ward. In a film full of wacky characters, they play their end completely straight with dedicated deadpan performances that treat every silly plot twist with the utmost sincerity. They never once mug for the cameras, and their iron-willed delivery of the most preposterous of dialogue is one of the film’s consistent joys. 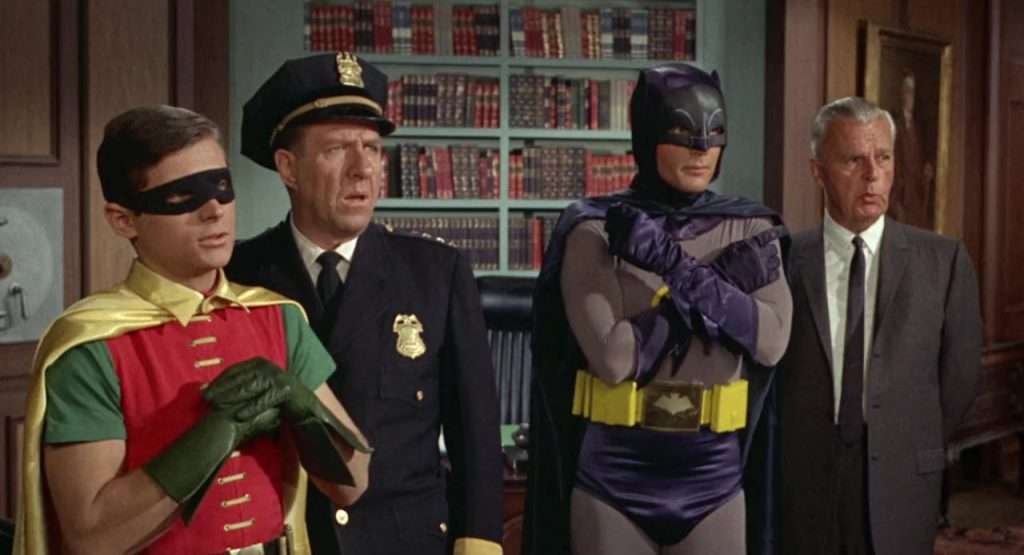 The film is also filled with gags, and I don’t think any gag rises to the absurdist heights of the Riddler’s riddles in combination with the dynamic duo’s efforts to unravel them. They are the most opaque, ridiculous clues as to what is happening, and the deadpan delivery of Batman assuring Robin that his guess of “a ballpoint banana” is obviously the only answer to the riddle of what has yellow skin and writes. 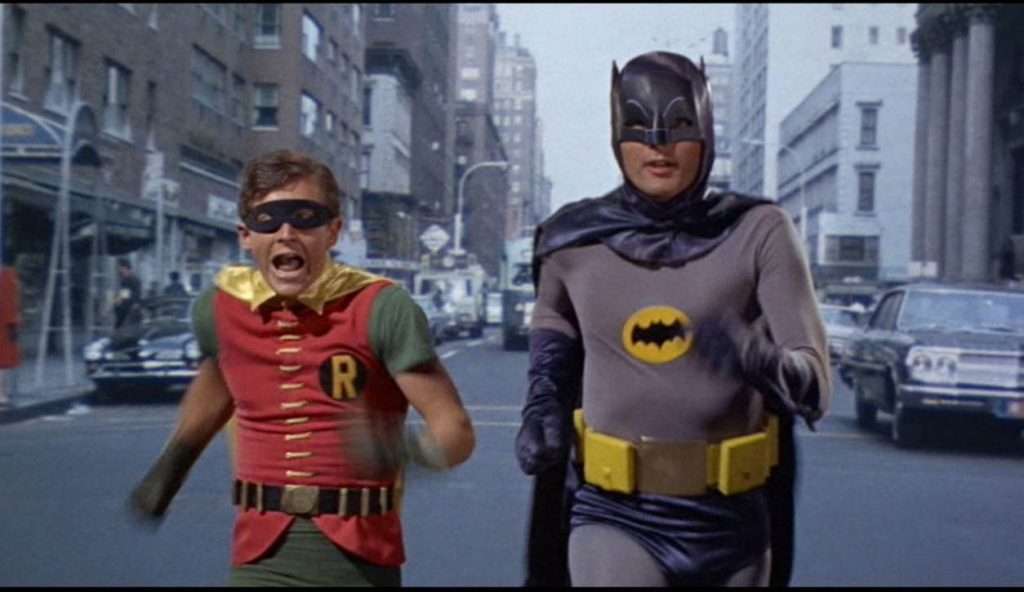 Beyond that there are more individual gags like the preponderance of Bat-themed tools like the shark repellant bat-spray, the bat-ladder, or the bat-helicopter. Batman needing to get rid of a cartoonish bomb, stymied at every turn on the pier by marching bands, families of ducks, and even nuns is just fun. The plot’s resolution where the sand of the security council’s members gets slightly mixed up and they all end up speaking in different languages is just solid material. This film has nothing to say. It’s not about the Cold War, or Batman’s place in the universe, or Batman’s duality of living life with a mask. It makes no effort to deepen Bruce Wayne as a character or give him something to brood about. It has Batman just standing in the middle of harshly lit sets like he’s a man in a Halloween costume instead of the Dark Knight. And yet, it works because it knows exactly what kind of movie it is supposed to be: silly and amusing. 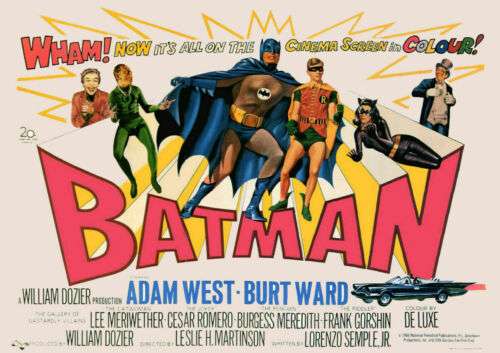