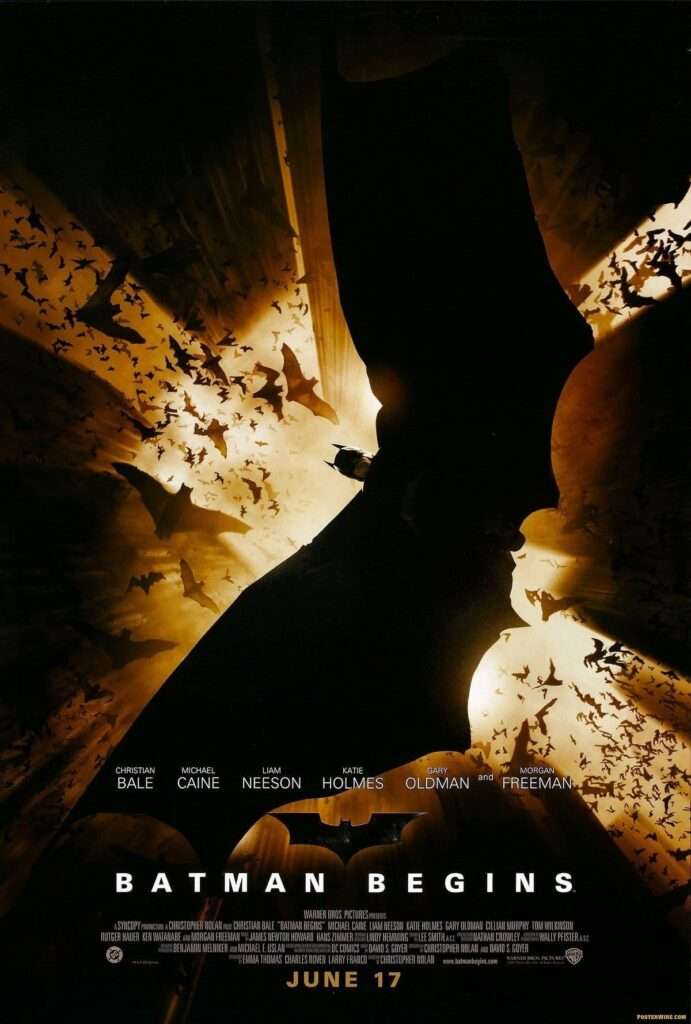 I saw this movie twice on opening day way back in 2005. I went by myself, and then, about fifteen minutes after I got home, a girl I had some interest in show up at my door and asked if I wanted to go see it. I immediately said yes, in part for the girl, but mostly so that I could see Batman Begins again. I was gob smacked by this movie. For a while I held that it was perfect, and I quietly held onto that bit of insistence for years as a quiet gnawing worked in my mind. Now, having watched it with a mind towards actually writing out what I thought about the film, I think I’ve come to realize what that gnawing is really about. You see, Christopher Nolan has an exposition problem. His idea of laying out a plot, character motivations, and relationships is to have characters explain them to one another. This appears in most of his movies to one degree or another. Even Dunkirk, which is mostly dialogue free, has a scene of an admiral explaining the situation to an army colonel. The thing is that Batman Begins might be the worst of the bunch in this regard. Thomas Wayne explains Wayne Enterprises’ efforts at cleaning up Gotham to his son, Bruce. Bruce Wayne explains his feelings towards criminality to Ducard. Dr. Jonathan Crane explains his toxin to Rachel Dawes. Rachel Dawes explains the decaying situation of the city to Bruce. Ra’s Al Ghul explains the motives of the League of Shadows to Wayne. Bruce Wayne, as the proto-Batman, explains the next movements of the plot to Lieutenant Gordon. It often feels endless, the phrasing stilted, and the delivery is often kind of flat. If a movie were nothing but its dialogue this would be a far less interesting movie. 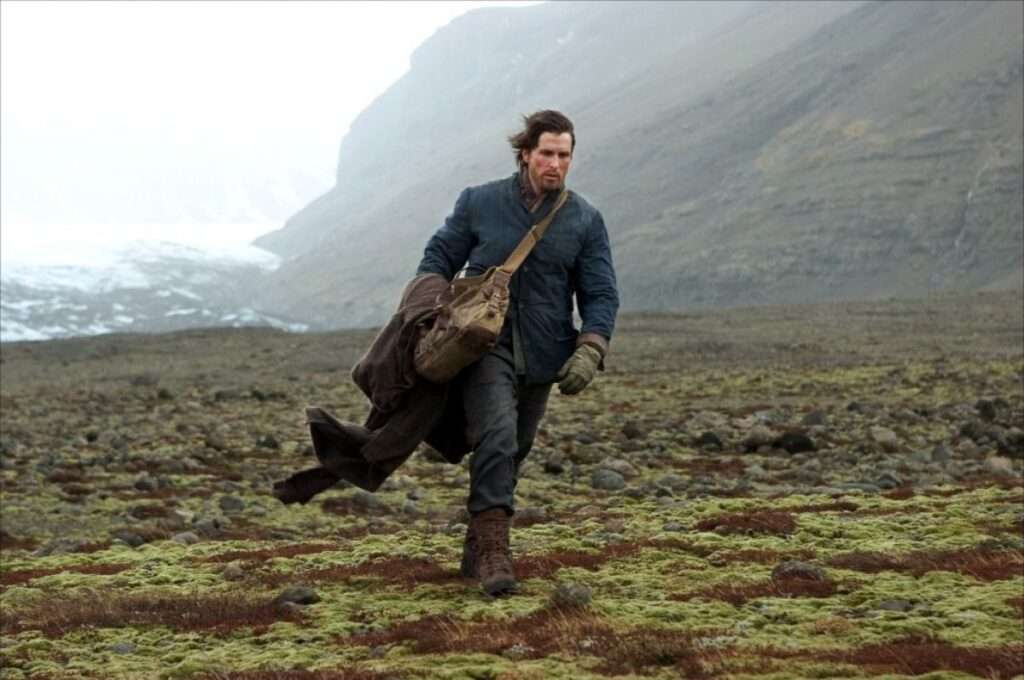 When this movie came out, comic book movies were still kind of inherently silly. The “dark and brooding” ones had been largely limited to Tim Burton’s run of Batman films that were as filled with gothic visuals as a brooding tone and Blade that was somewhere between self-serious and self-consciously silly depending on which of the first two movies you were looking at. What Christopher Nolan brought to the genre wasn’t seriousness or even dark grittiness, but ambition. He took the job directing the first Batman movie since Batman & Robin because he wanted to use it as a stepping stone to making larger budgeted movies of his own material (boy, did that work our really well). He didn’t approach this as just another job, though. He seems to have thrown himself into it, using the film’s story to explore the origins of Batman as a character. Not just the literal steps of Bruce falling into the well as a boy, going East as a young man, and fighting local crime, but the ideas that undergird the motivations of a man dressing up like a bat to fight crime in general. 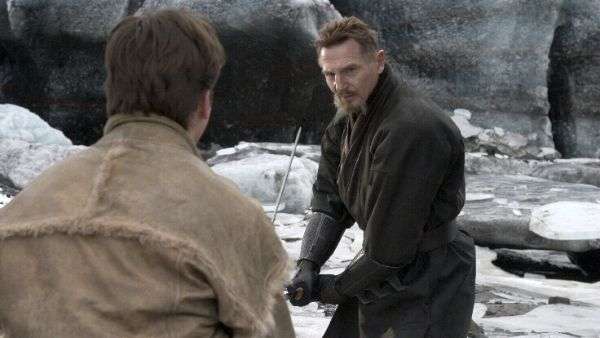 That base idea was Fear. Bruce Wayne’s journey to become Batman is about a man conquering his fear to the degree that he can turn it against those who oppose him. What that fear is ends up a little murky. Is it bats? I think that they’re emblematic for Wayne, not the specific source. Bats end up tied much more directly to the death of his parents than in any other previous iteration of the character by Thomas Wayne taking Martha and little Bruce to a production of Mozart’s Don Giovanni where the bats spinning around above the stage recall the bats that attacked Bruce in the cave, scaring the child out of the theater. Adult Bruce may share some of that base fear of bats, but by tying the bats to the night that Thomas and Martha Wayne were murdered enhances the connection between the symbolic bat with Bruce’s actual fear tied to the brutal act of criminality that robbed him of his parents. All tied up together, it makes Wayne’s later decision to use the bat as his symbol feel more natural. 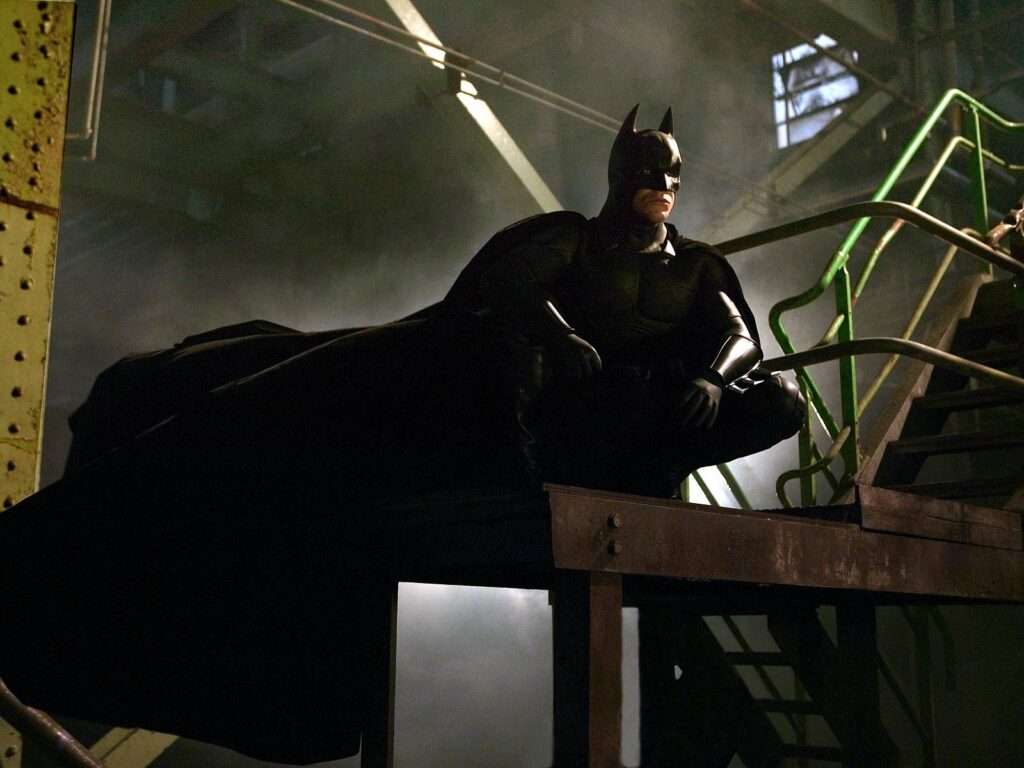 The other major element of Batman’s origin that Nolan explores is the use of symbols in general. Bruce doesn’t take on the mantle of the bat simply because it will hide his identity and protect those closest to him. He takes it on to make himself, as Ducard says, to become more than just a man. An incorruptible icon and force meant to instill fear will do more of just that than billionaire Bruce Wayne ever could. It’s not that people are afraid of bats. It’s that people are afraid of something they can’t hurt, and Batman as a symbol, with no identity, strong, skilled, and resourceful, is more than just a guy who can throw a punch. He’s a force of nature. All of this gets said in the movie in rather stilted dialogue, but it also works dramatically. We can see Bruce become Batman and the understandable effect his theatrics have on his opponents. 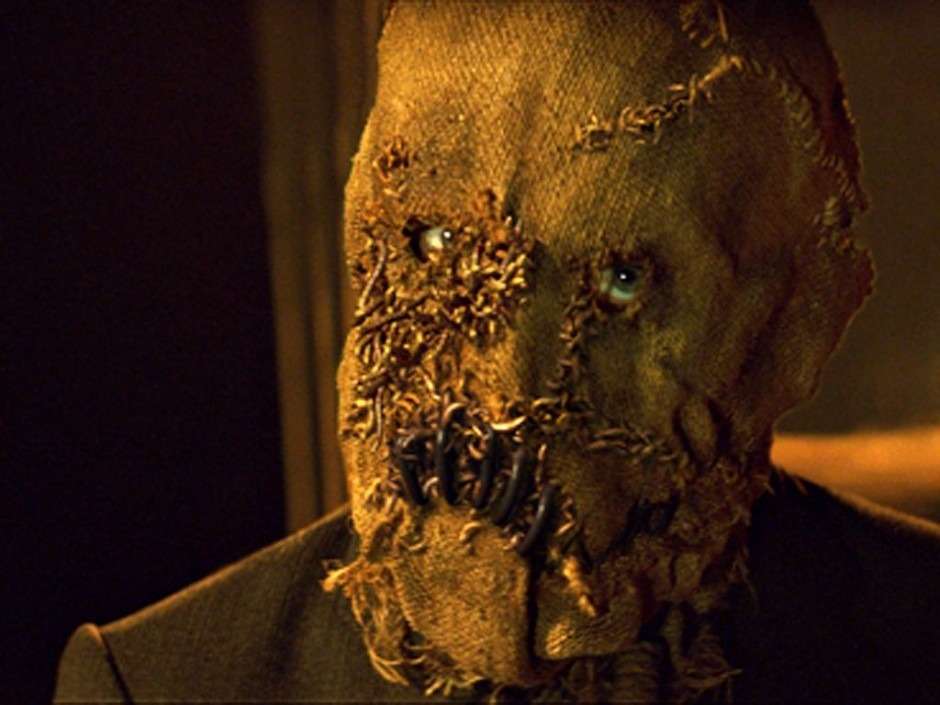 And that leads me to one of my favorite parts of the film. An element of the plot is a rare blue flower that, when burned, produces a sensation of fear in the subject. Jonathan Crane, the Scarecrow, uses this on the city, and the way Nolan shows the effects of the toxin are fantastic. Like much in Nolan’s work there’s an element of intellectualization rather than direct emotion involved, but this is one case where I think it works extraordinarily well. There are a few examples to highlight such as when Batman gets hit with Crane’s weaponized version of the toxin and he sees bats pouring out of the Scarecrow mask. Is that instilling fear directly into the audience? Maybe. Maybe not. 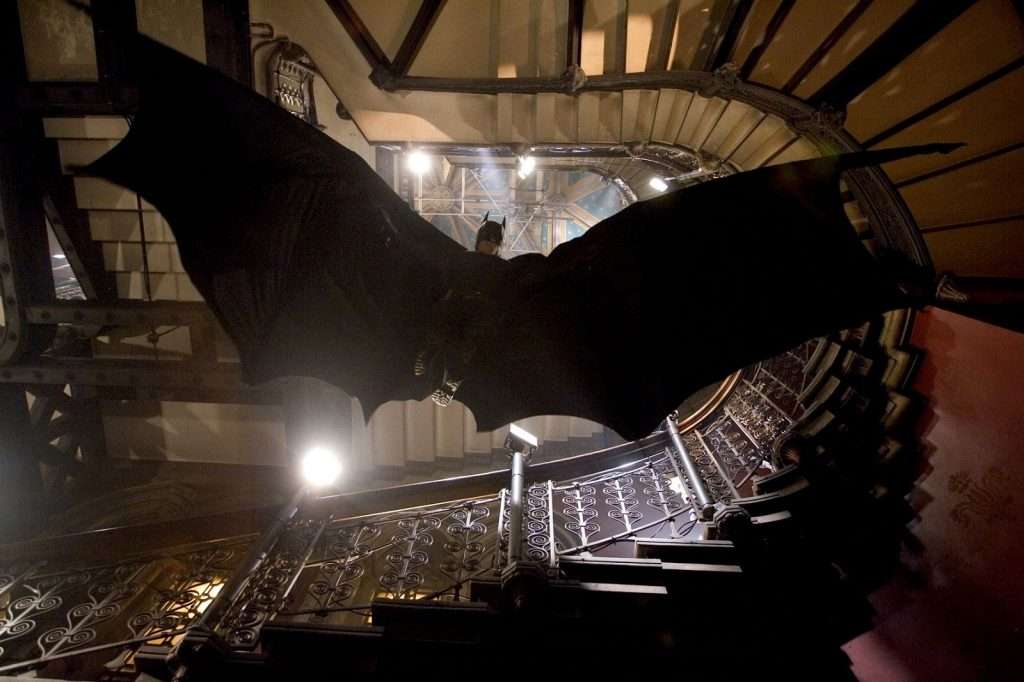 However, it is the sort of image that you would expect out of a nightmare. When Batman turns the tables on Crane and exposes him to the toxin, Crane sees Batman’s face morphed into a solid grotesque gargoyle face with some kind of black liquid oozing out of his mouth. Again, maybe the audience is directly scared by the image (I’m not), but I understand how the character in particular, Crane, could be hobbled by the fear of what we’re seeing because, again, it feels like it’s an image that could come from a nightmare. The last one to highlight would be during the movie’s climax when Batman flies over the Narrows that’s been infused with the fear toxin and we look up from the ground level, from the perspective of those under the toxin’s influence. We see Batman looking down with glowing white hot eyes and some kind of primal scream emanating from his white hot oval of a mouth. I, as the audience, don’t feel the fear, but I understand the reactions the characters have to it. 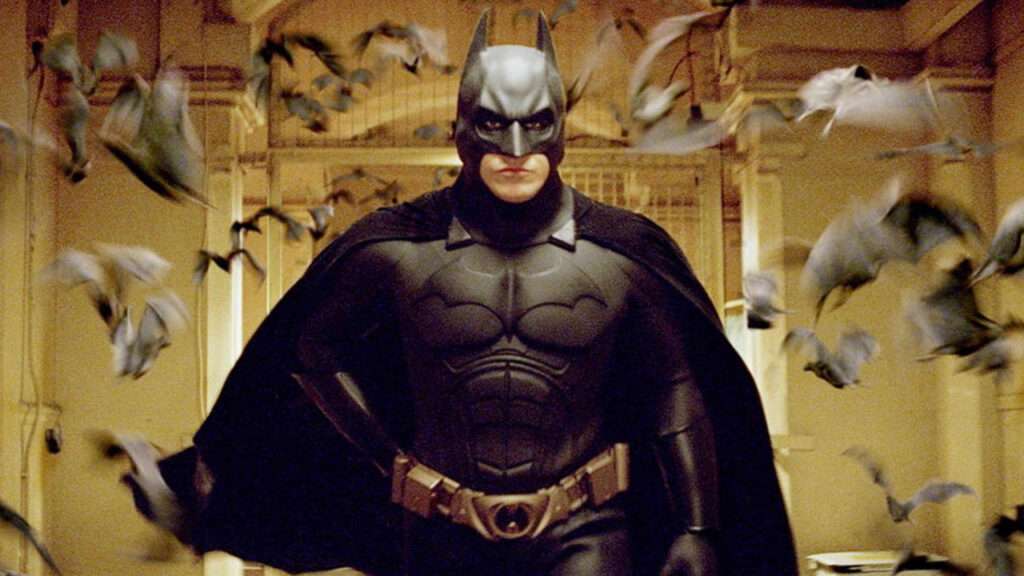 I don’t know what was in Insomnia, Memento, or Following that told Warner Brothers that Christopher Nolan was the right man to bring a large spectacle to life, but he tackled the action of a comic book movie with aplomb. Set pieces are largely designed around a Paul Greengrass style of action filmmaking with close quarters filming, but it’s with a purpose. Very early in the film, Ducard tells Wayne that fighting is not a dance, so the action ends up feeling like a reaction to the last of the Batman films under Joel Schumacher more than anything else. It also feeds into the idea of fear since action scenes are often told from the perspective of Batman’s opponents rather than Batman himself. This works most particularly during Batman’s first real appearance at the docks where the movie gains the aspect of a horror film. Those getting beaten can’t see what’s beating them, so filming close up actually ends up feeding the scene’s overall goals rather than just being an aesthetic choice. Nolan could have pulled back a bit more in other circumstances like the final fist fight between Batman and Ducard, betraying, perhaps, a certain lack of understanding of action filmmaking outside of using it in a horror setting, but it mostly works in context quite well.

This movie is the kind of rich that comic book movies never were up to this point. The original Superman movie was more of a grand adventure than something with this kind of ambition. Nolan brought a level of cinematic seriousness to the genre in the exact vehicle that could use it: Batman. That doesn’t mean that this kind of seriousness or even ambition is appropriate across the whole genre, of course. There’s always room for different kinds of superhero movies just like there is always room for different kinds of samurai movies, but Nolan tapped into something that the genre had been missing up to this point. It may not be perfect, but it’s still very good.