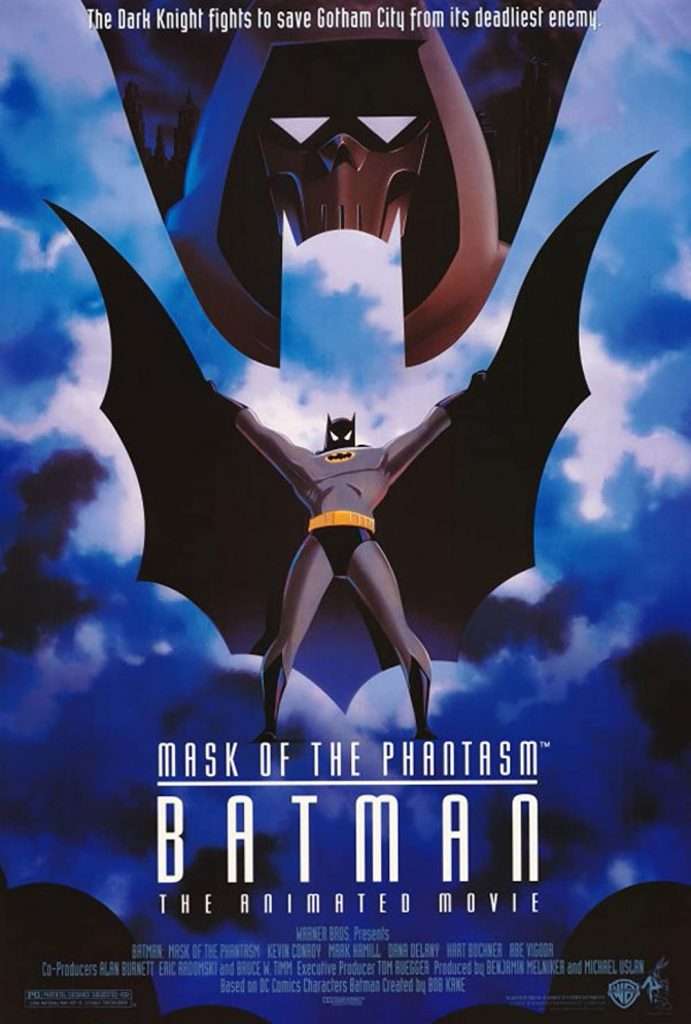 #1 in my ranking of theatrically released Batman films.

There are really two ways to go when adapting a television show, much like with sequels: you go bigger, or you go deeper. The live action adaptation of the 60s comedy show went bigger, bringing in all of the main villains together for one large plot. This feature film continuation of the animated series from the early 90s goes deeper, much deeper, possibly gaining and retaining the crown for the film version of the Caped Crusader that gets him best. And, in addition, the film is shockingly tight, with a villain that informs our main character rather than  just stands apart, intelligent use of images to help provide deeper meaning to what’s going on, and a marvelous voice cast that nails the emotional reality of what’s going on. Also, it’s just great to look at on top.

A masked vigilante has begun killing prominent mobsters, and Batman (Kevin Conroy) is being blamed. Commissioner Gordon (Bob Hastings) refuses to believe that it’s Batman since Batman does not kill, but city councilman Arthur Reeves (Hart Bochner) is on the warpath, convinced of Batman’s guilt. We know from the start that it’s not Batman because we watch the masked figure, the Phantasm, do the deed. Who is the Phantasm, and what do they ultimately want? 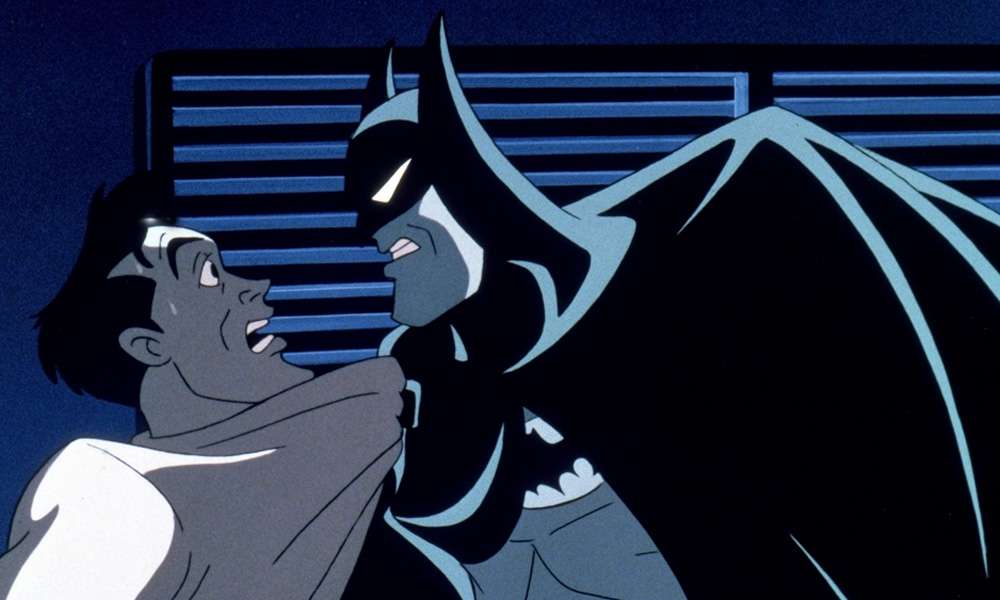 I remember being lukewarm on this film when I was much younger because the film barely contained the Joker. He doesn’t appear until halfway through, and he doesn’t become prominent until the final act of the film. In his place for most of the film are these relatively generic mobsters, ultimately led by Salvatore Valestra (Abe Vigoda). What the movie does with these less flamboyant villains is really allow the focus of the film to rest on Bruce and his exploration of his past. For the film, the team of writers (most notably including Paul Dini) created a woman from Bruce’s past, Andrea Beaumont (Dana Delany). She and Bruce fell in love in the earliest days of Batman, before Bruce had settled on the bat as his engine of fear. The conflict Bruce has between needing to fulfill his vow to his parents to exact justice upon those who would prey upon the innocent of Gotham City and his desire to simply be happy with Andrea pinpoints who Bruce is when he is Batman. He cannot have ties because his life can be nothing but Batman in order to do what he has to do. The idea of marrying Andrea almost convinces Bruce to abandon the project, that for which he begs forgiveness from his parents at their grave. When she and her father mysteriously disappear after Bruce proposes to her, he had nothing left and took up the mantle of the bat. 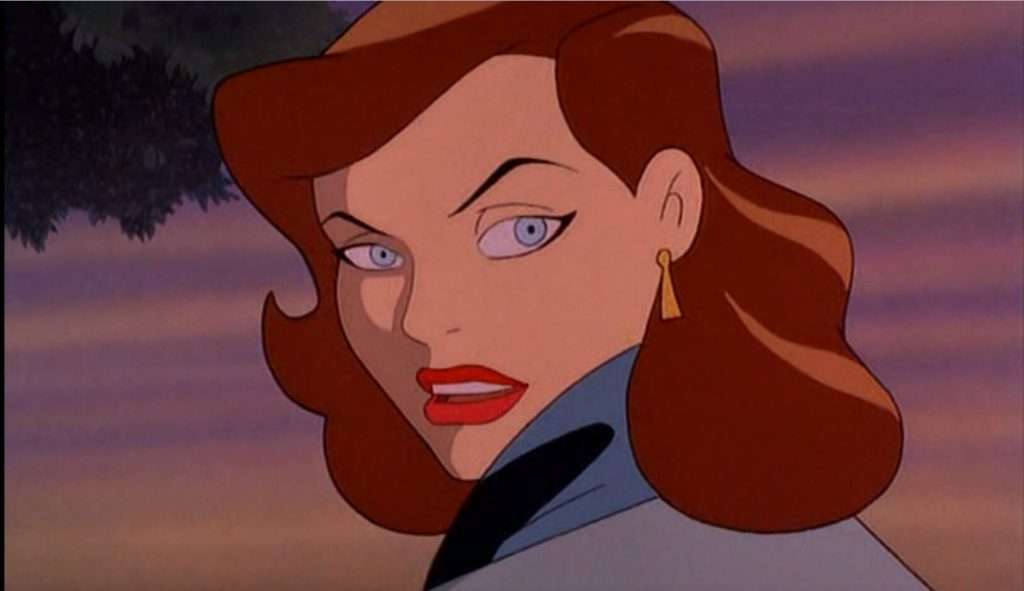 This backstory is told in flashback interspersed amidst the present day investigation of the Phantasm and the deaths of the mobsters. Salvatore ultimately runs to the dilapidated World’s Fair of Gotham where the Joker (Mark Hamill) is hiding out to look for safety since, in another life, the Joker was one of Salvatore’s henchmen. 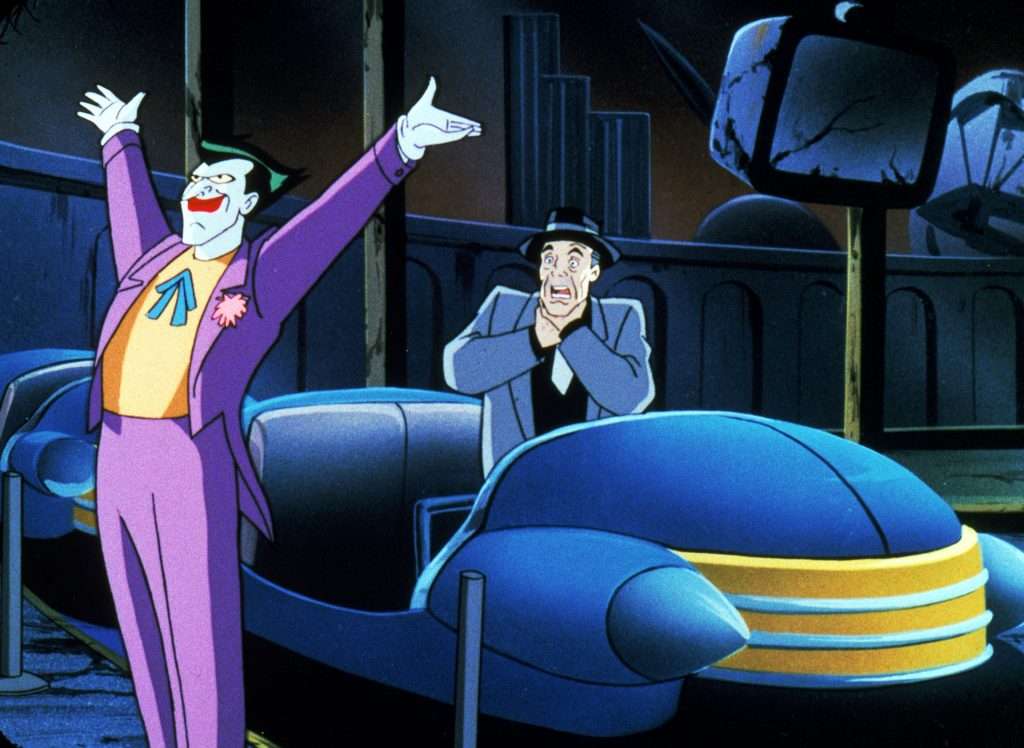 Now, when I say this movie uses images really well, I’m mostly thinking of the World’s Fair. There’s a scene in the flashback where Bruce and Andrea go to the World’s Fair, seeing it in all its glory, and it’s at the same time that Bruce is seeing his future with Andrea as a happy, hopeful thing. The World’s Fair’s vision of a technologically advanced future feeds that. When Salvatore goes there to hide, we see it falling apart, the promise of the future having fallen into disrepair, mirroring the destruction of Bruce’s own image of his own future, but that’s just the start of it. The film’s finale takes place there, and the ultimate fight pits Bruce against the image of Andrea he had held onto for years, ultimately ending with the whole place exploding in huge balls of flame at the same time that Bruce realizes the future he had imagined, and gotten a taste of once more, was never going to come back. 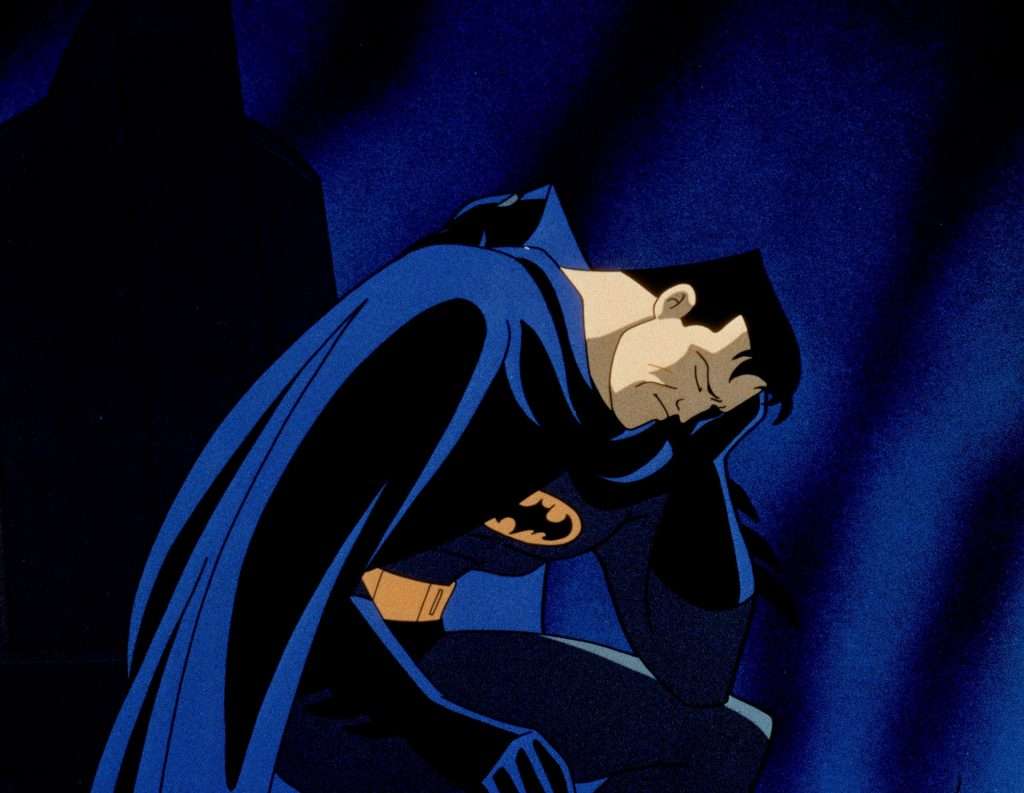 The actual mystery extends into Andrea coming back to Gotham after the deaths have begun, and her immediately figuring out that Bruce is Batman (because she’s no dummy). The deaths of the mobsters are intimately tied to her past and, in particular, the day that she left Bruce. How all of this comes together (in a super-tight 78-minute film no less) is rather amazing. 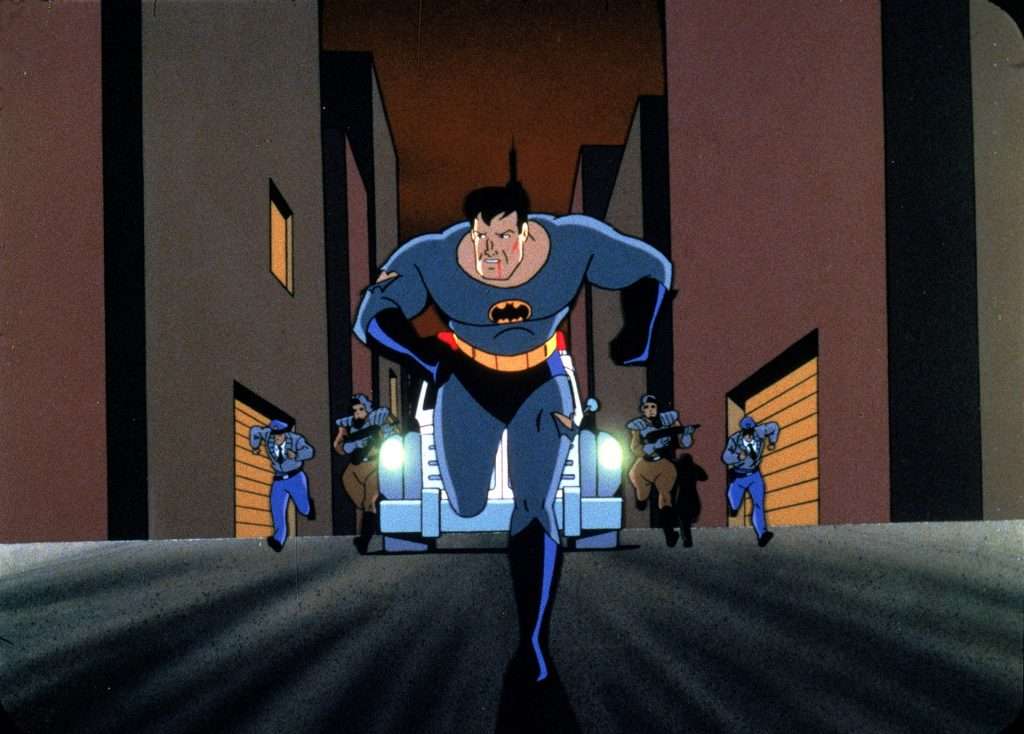 The art-deco inspired visual design of the film (and show, of course) has always provided it a certain timeless appeal. Much like Burton’s Batman, the combination of film noir-like character design and costumes mixed with the high-tech computers allows the movie to exist outside of a specific time, giving it the ability to age rather gracefully. Thirty years after the film’s release, it doesn’t feel like a product of the early 90s, it feels like it could have been made at any time. The score, built off of Danny Elfman’s original work and expanded wonderfully by Shirley Walker, helps enhance the depth of feeling, tragedy, and sadness of the film as well. 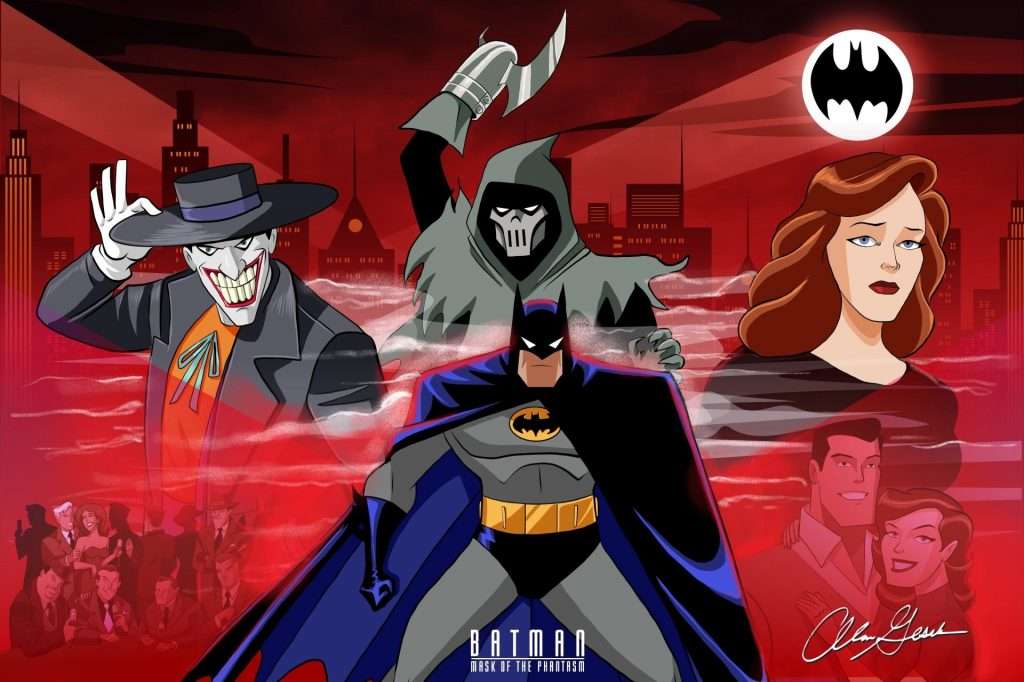 I love this film. It really is one of the best depictions of Batman on screen, and I’m really glad I finally revisited it.