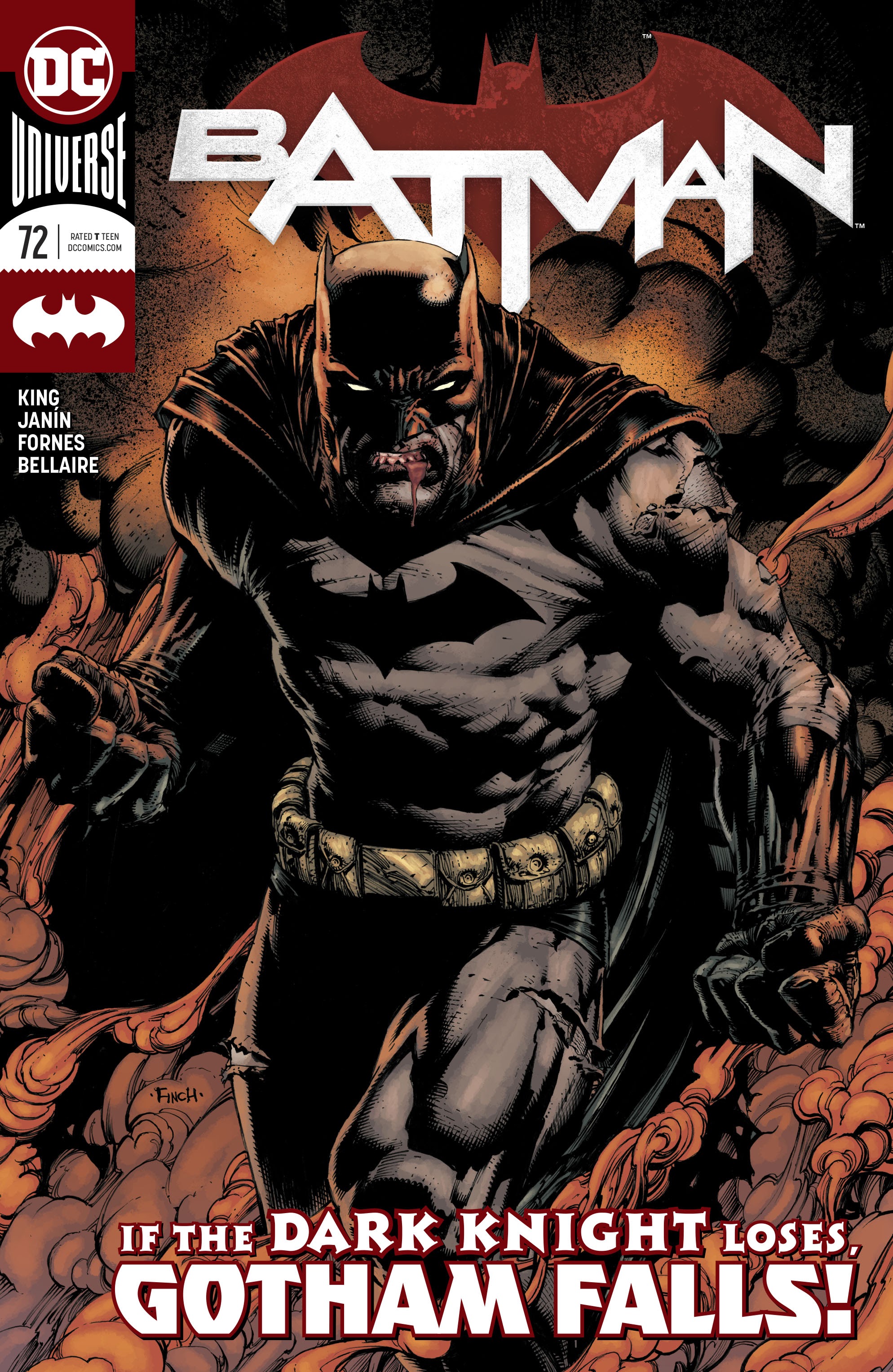 Average writers build stories around continuity and established character history and motivations. Tom is so broken at this point he’s given up trying to tell coherent stories. King wants readers to believe Batman is broken after the events of Batman #50. Batman readers know its King himself who truly broke following “The Wedding” that never was. He simply can’t write at this stage in his career.

Issue 71 ends on a very interesting cliffhanger. Batman strikes Tim Drake’s Robin for trying to help him. This has a reverberating impact on Batman and his family moving forward to issue 75. King tells ComicBook.com, “when you hit 75 you’ll be as low as Batman gets.” What’s the fallout of Batman striking one of his protégé’s? That’s a great question. Batman #72 doesn’t mention it once. 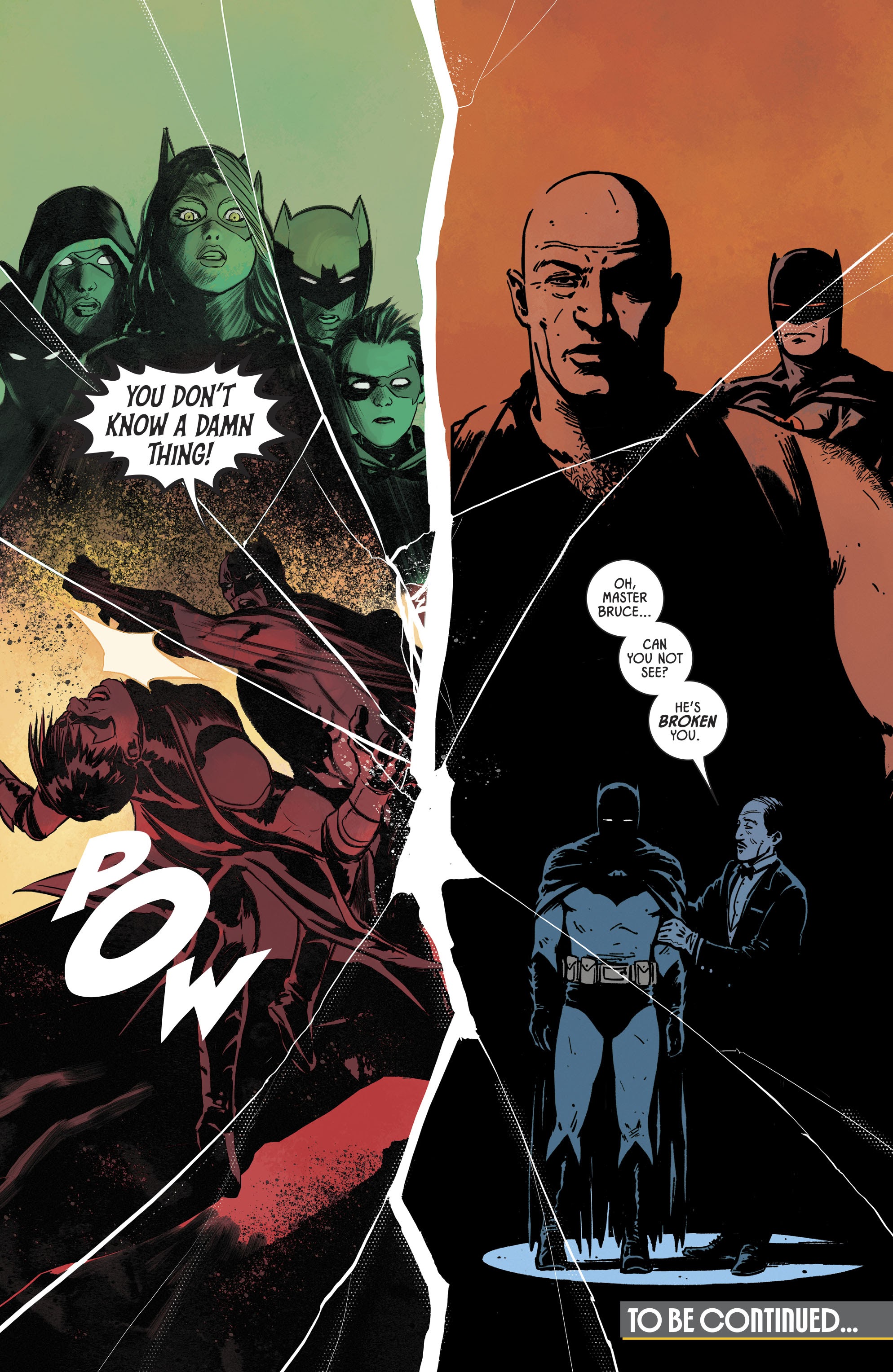 It’s a “previously on Batman” issue, recapping events in the previous 71 issues. Tom King now presents Bane as an all-knowing character in the mold of Doctor Manhattan. Rather than the character Chuck Dixon and Graham Nolan created in 1993’s Vengeance of Bane #1. It doesn’t work, at all.

Readers bored to death with Batman haven’t seen nothing yet. This issue is one extremely long monologue of Thomas Wayne explaining Bane’s convoluted master plan back to him. Not ONE SINGLE THING HAPPENS in this issue.

The art features beautiful splash pages from Mikel Janin. Depicting key moments from the previous 71 issues. The monologue sync’s up with Janin’s art most of the time. Janin is a Batman staple and his extremely fluid line art are unmistakable and flawless. 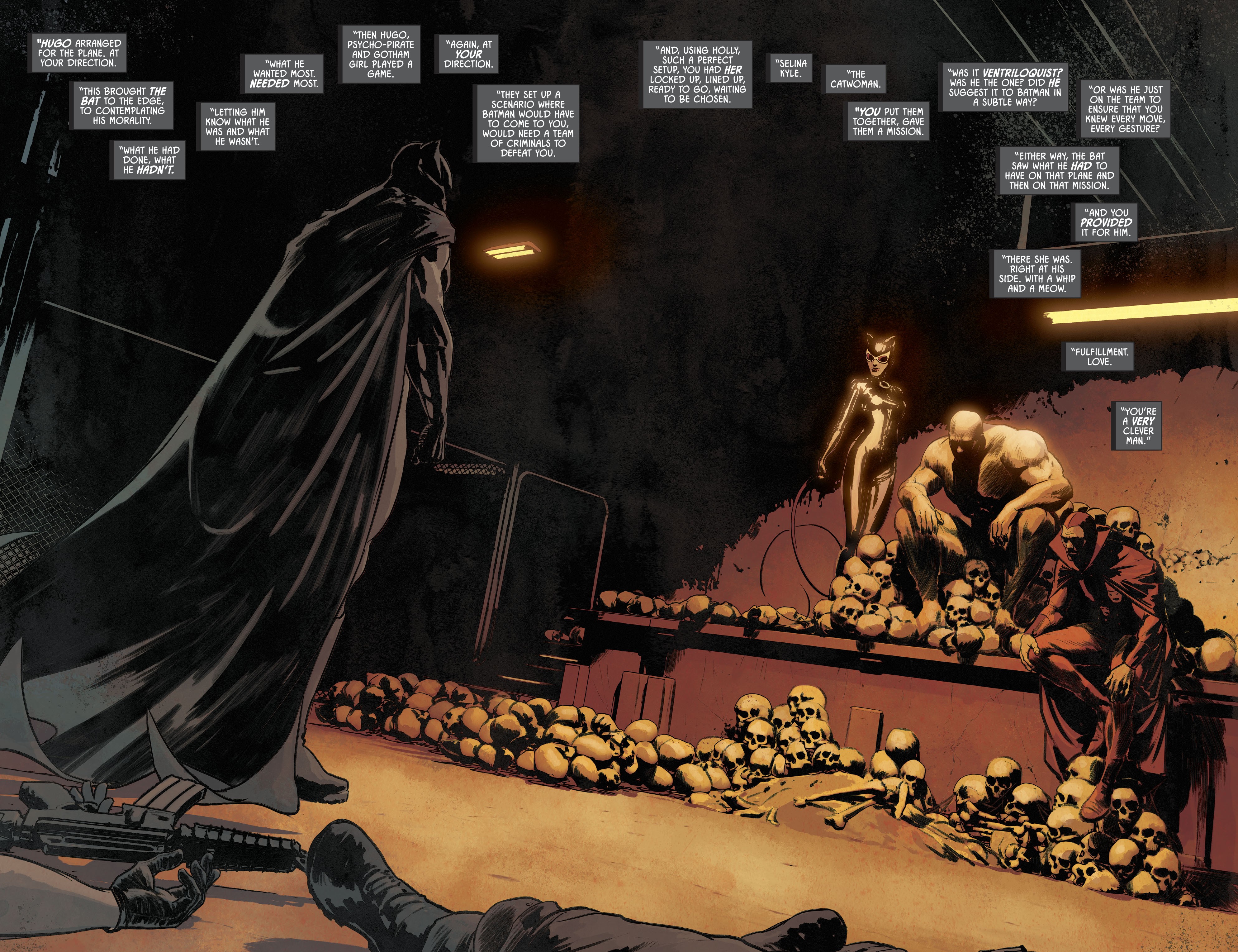 The beautiful spreads of key events are interspersed with an ongoing fight between Batman and Bane illustrated by Jorge Fornes. The assumption is this is all in Bruce’s head but at this point who knows. And worse, who cares honestly. The fight has absolutely nothing to do with the narration. This could just as easily be Batman and The Condiment King holding hands and skipping. It would sync up with the words just as well.

In King’s convoluted mess of a story Bane manipulates Bruce Wayne into falling in love with Selina Kyle. Joker and Riddler help Bane understand Batman is no different than the villains he fights. In his heart, Batman is a monster hiding behind the mask of a man. He is a war waiting for peace. I’ve heard questions about who the real personality is, Batman or Bruce. There’s validity to the debate but King’s misunderstanding of Batman really shines here. Bruce Wayne lives by a code that keeps him from being like the villains he fights. Tom King believes in his heart Bruce is a monster. 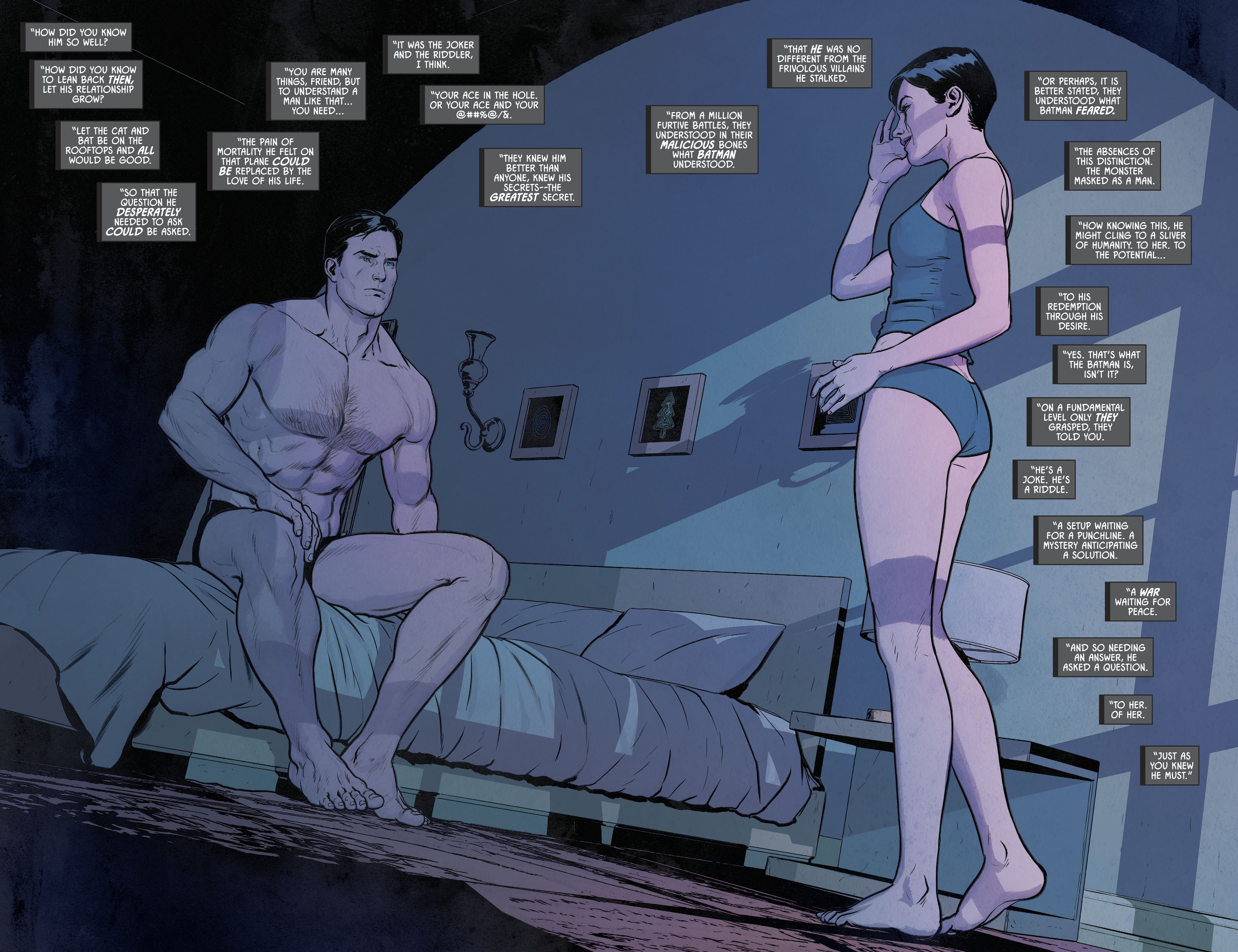 King later churns out Twighlight-esque dialogue. He describes Batman’s relationship with Catwoman as, “something he could finally put above his fancy, sacred vow.” “She was something different.” “His love for her was not the altruistic love of a father for his children. It was the utterly mercenary love of a man in need. A love so dynamic, so vigorous, it might help that poor boy in crime alley” Tom King needs to lay off the trash romance novels. This dialogue is a complete embarrassment to himself, the Batman character and its creators, his editorial team and DC leadership in general. 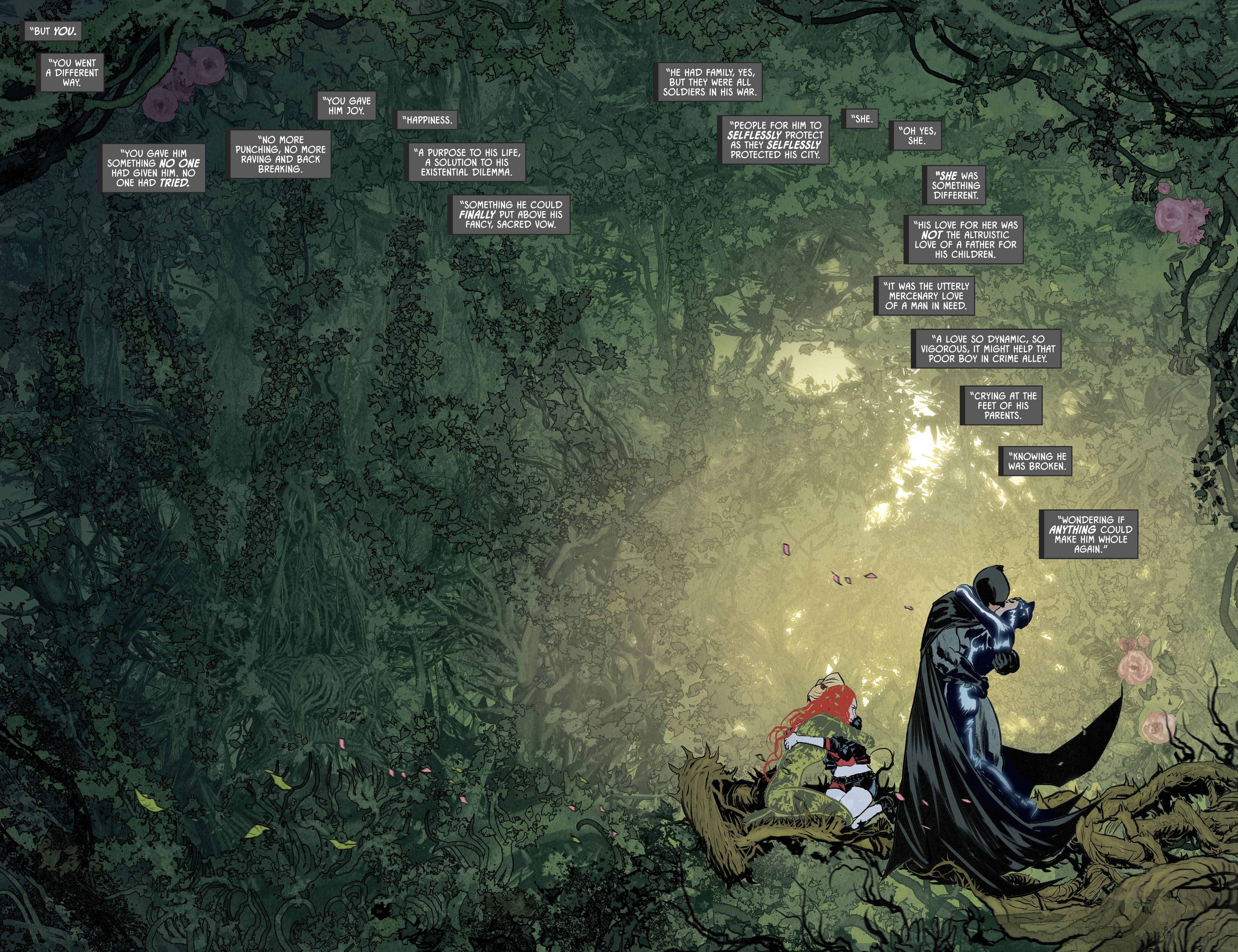 This is also where King really starts making events up. He attempts to connect the events of ‘The Gift’ into Bane’s masterplan. Booster showed Bruce a world without Batman. A world with a content Bruce Wayne turns into an absolute horror. Except Booster didn’t take Bruce with him in “The Gift”. King forgot this very important detail of his connected story. Furthermore, it’s never established he tells Selina Kyle about what the world becomes if Bruce Wayne is not the Batman. 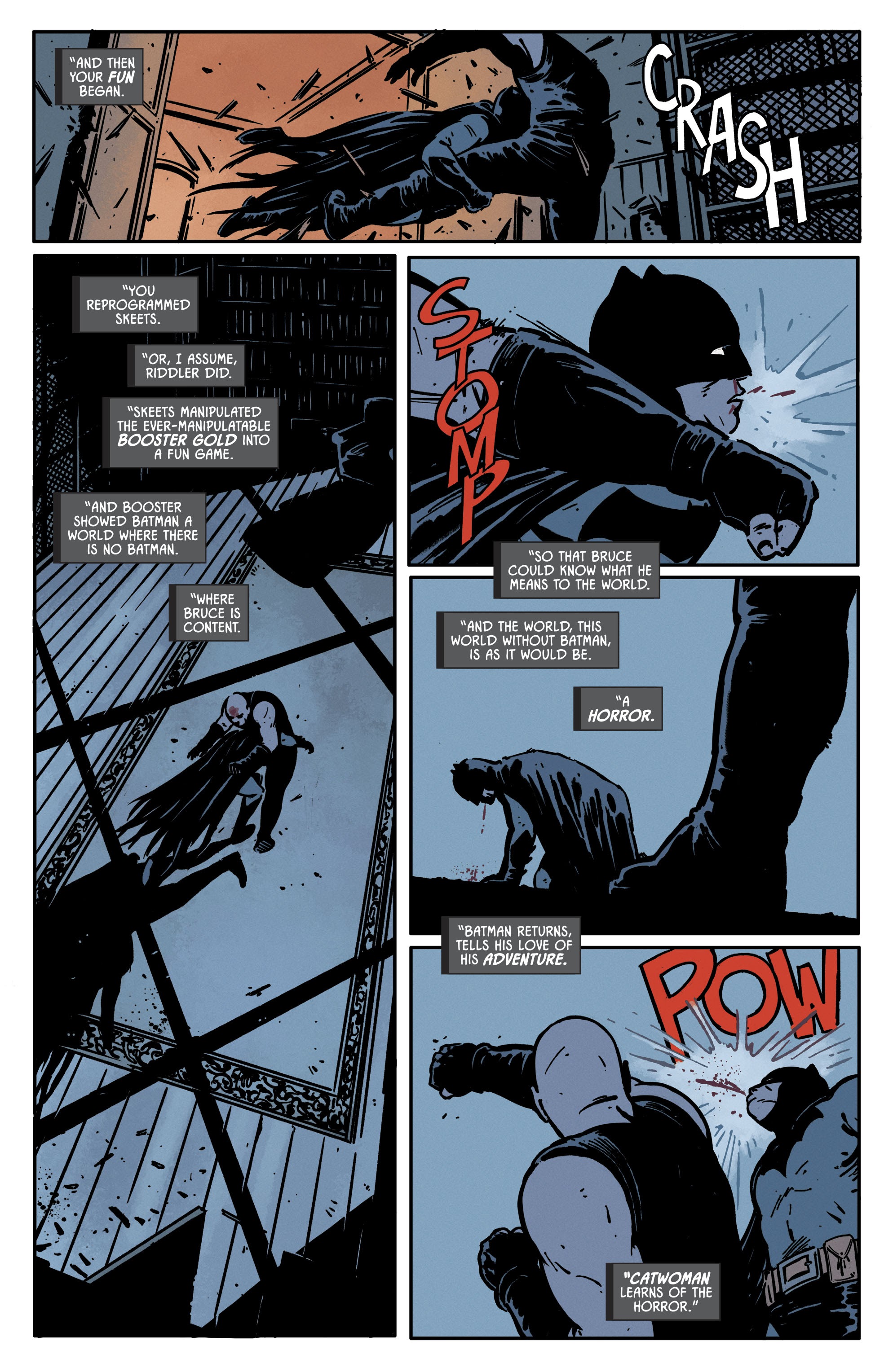 Next Bane calls Joker “an old friend of Selina’s” “whom she always listened to.” Since when? The only instance that remotely resembles this characterization is in Prelude to the Wedding. Joker is also being played to do Bane’s bidding. This doesn’t remotely reconcile with Jokers character. He’s the ultimate anarchist. He teams up with other villains but never to serve any purpose but his own.

King’s retroactively changing his own story and long standing characters to fix the Grand Canyon sized plot holes and contrivances he creates.

In the end Bane once again lifts Batman above his head and breaks his back. It has no impact with the reader whatsoever. A reminder of the chasm between all-time great Chuck Dixon and pretender Tom King. He wants readers to believe Bane’s original loss to Batman, The War of Jokes and Riddles, Batman and Catwoman’s engagement and subsequent not wedding, Booster Gold’s The Gift and more are all connected. It made no sense prior to issue 72. It makes no sense after. 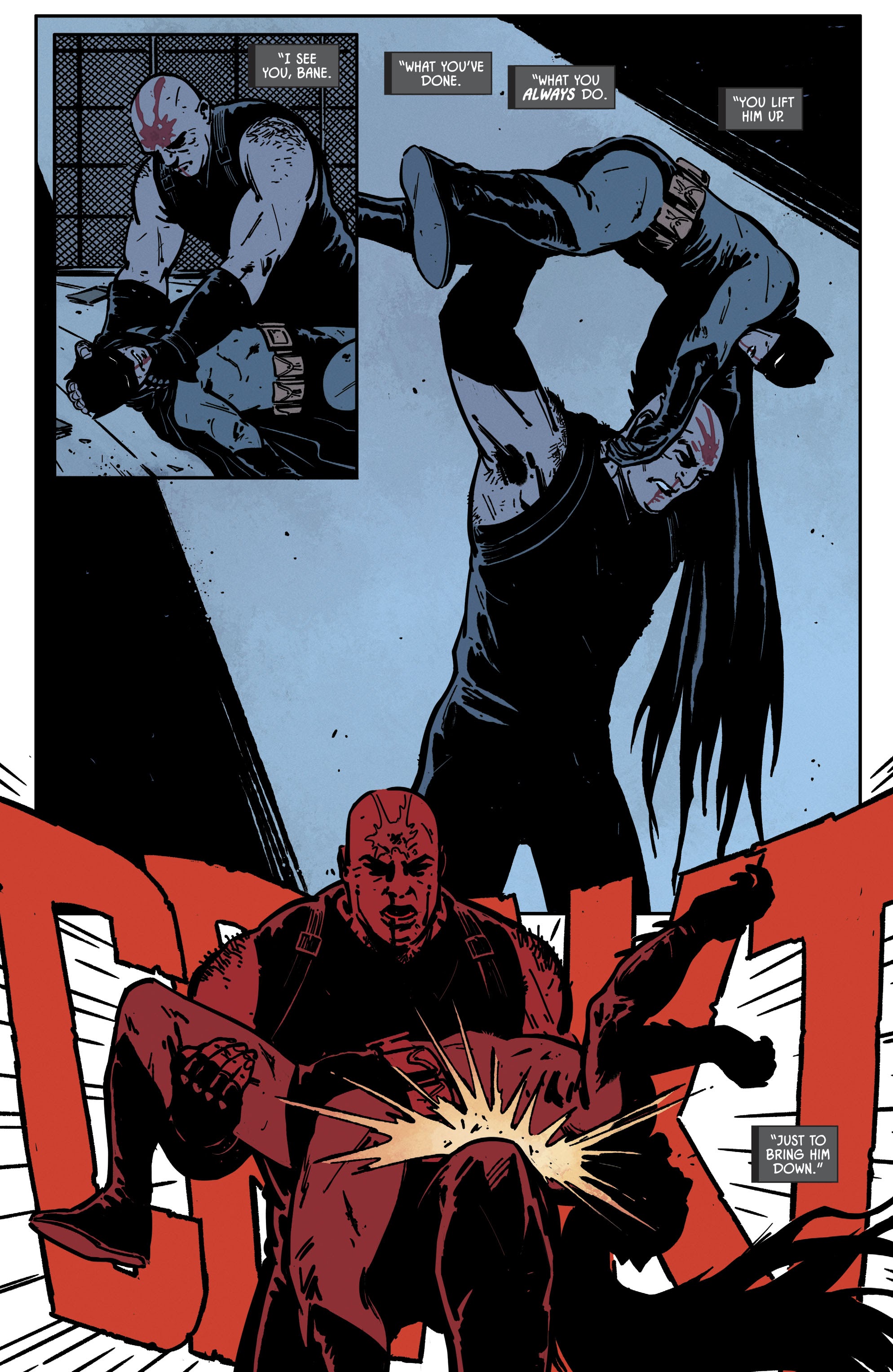 Nothing happens in this book. It’s just as skippable as King’s atrocious ‘Knightmares’ story arc. Worst of all for King, his story devolved and became so convoluted his post-wedding Batman it’s not easy to forget. Much like terrible event books will be compared to his Heroes in Crisis series. Terrible story arcs are going to be compared to King’s Batman post “The Wedding”. Writers who experience a near-instant loss of writing ability will be compared to Tom King’s fall in late 2018 into 2019.

For a more in-depth review of Batman #72 please watch the video below.