Back Issue Freak Out: Is This THE Scariest ‘Aliens’ Comic of All Time?

In my first week of recovery after spending almost a five days in the hospital (don’t worry, I’m OK), I decided to slide out a few old long boxes to revel in some classic comic book storytelling.

Dark Horse has pumped out some good “Aliens” yarns over the years; however, too often they follow the same pattern: A scientist (or group thereof) is clandestinely working on some Alien-based experiments, and those who discover them face grisly death.

1993’s four-issue “Aliens: Labyrinth” series follows this outline, unfortunately, but its third installment is the thing of nightmares. 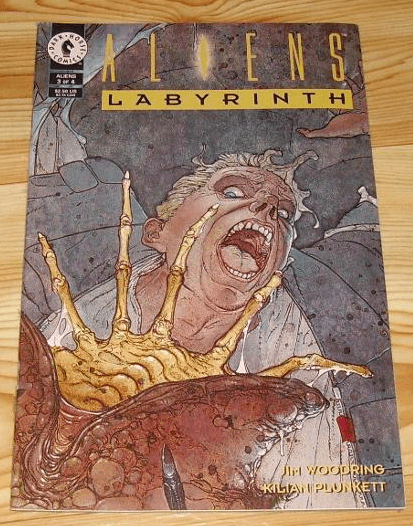 The series centers around Colonel Doctor Paul Church and his Alien research and the penultimate issue shows us just why he ended up doing what he does. Thirty years prior, Church, his family, crew, and several researchers went to retrieve a “time box” from a fledgling terraformed moon … and ran smack into a hive of Aliens. 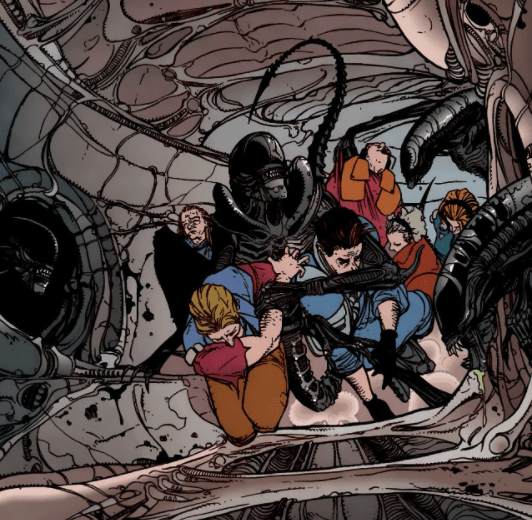 Church and his comrades aren’t merely killed or impregnated by facehuggers. They’re taken into the Alien hive for, at least for the nonce, Lord-knows-what reason. Never before have we been, er, treated to the unimaginable horrors inside the hive. Jim Woodring’s narrative perfectly compliments Kilian Plunkett’s disturbing pencils:

“[The hive] was beyond stench. It was beyond foul. It was an incomprehensibly loathsome miasma that raped one’s soul through the lungs.”

“My eyes and nose were scoured by the hideous stench, while sounds of distant human voices, screaming and sobbing and begging, assailed my ears.”

While Church is adhered to a wall inside the hive, the rest of the crew are mutilated and probed for purposes Church slowly begins to unfold. He decides to “play along” with his captors, hoping his cooperation will garner the Aliens’ trust. 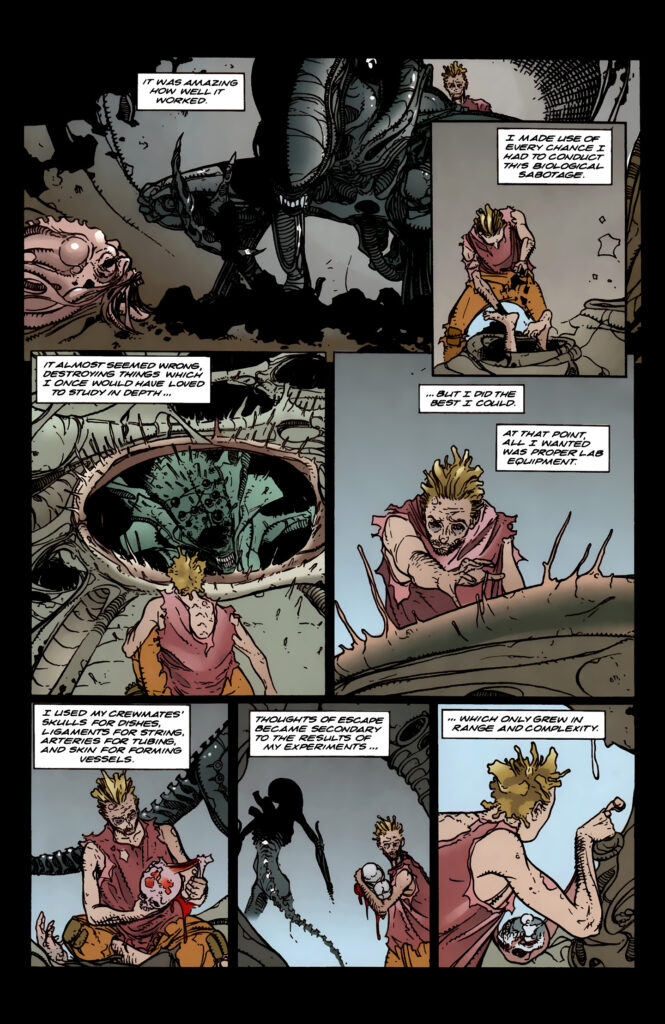 But despite this well thought-out plan, eventually Church is subjected to the indescribable terrors he has thus far largely managed to avoid. The Aliens eventually bring him before his own mother — who’s had all of her limbs torn off — suspended in a hammock-like cradle of Alien goo. For what reason? To mate with her.

Church manages to strangle his mom before the Aliens can stop him, and it comes at the usual price: An Alien egg is brought before him.

This wild issue briefly continues into the fourth and final installment, which features Church extracting the Alien from his own chest using a mechanical surgeon similar to that used by Dr. Shaw in “Prometheus.”

Up until “Labyrinth” came out the gold standard for “Aliens” comics was Dark Horse’s very first offering — “Book One” by Mark Verheiden and Mark Nelson (which has been reissued and retitled several times).

Overall, it indeed remains the best, but in terms of straight, pure, nightmarish terror, issue #3 of “Labyrinth” stands alone.

Star Wars Returns to Dark Horse Comics with Hyperspace Stories #1
Review: Robert E. Howard's 'Conan: God in the Bowl'
Why Kevin Smith Should Just Stay Out of Comics Altogether
Dark Horse Comics' All-New Manga Set in the World of ‘THE WITCHER’
Kevin Smith Launching His Own Line of Comics at Dark Horse
DC & Brian Michael Bendis Developing Legion of Super-Heroes for HBO Max
Everything to Know About Embracer's Purchase of Dark Horse Comics