At The Movies with Robert & Ingrid: Rambo Retrospective: ‘First Blood’ (1982)

A few months ago, Ingrid and I did a movie marathon of the Rambo movies! Unfortunately, I fell into a rut right afterwards, but now I’m finally out of it and I really wanted to share our thoughts on each and every one of Sylvester Stallone’s Rambo movies! Previously we did a review for Last Blood, and a link to that earlier review will be shown in the video, but we’ll also include our thoughts on Last Blood when we end these reviews at the end of the week with a Rambo retrospective. 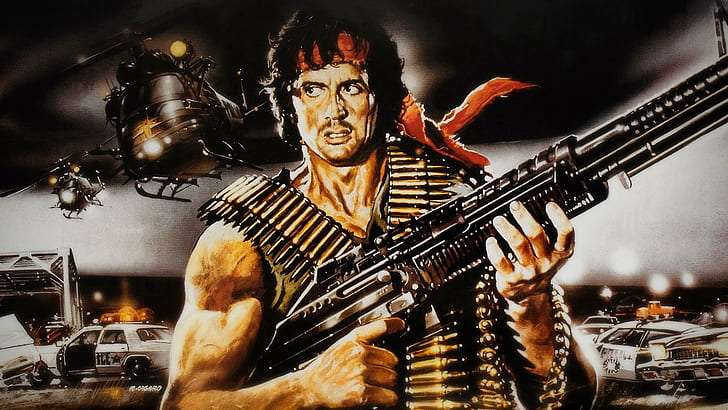 Beginning with 1982’s First Blood, based on the novel by David Morrell, the screenplay was written in part by Sylvester Stallone in one of his two most recognizable roles (the other being Rocky Balboa of course) this movie is less the action film we expected and more of a character drama.

It tells the story of John Rambo coming back to the states after fighting in Vietnam. He is hitchhiking and barely holding things together as he approaches a small town, just wanting the pass through and move on. However a local Sheriff (which if you read the novel, is a Korean War Vet who felt Nam vets have gotten more attention than his brothers in arms ever did) wants him out of town. John resists and that’s when things start to escalate.

The result is Rambo versus the cops but, with one exception (technically three exceptions, but the other two are implied, never shown). Rambo does not take any lives, but it’s apparent that things are going to end one way or another.

Wow! Ingrid and I see why this movie is considered a classic! It’s surprisingly well acted, well written, well directed, and most importantly, it’s full of some really grey areas in regards to morality. There’s no clear cut ‘good guy’ and, except for one asshole cop, there’s no clear cut ‘bad guy’ either! John Rambo clearly crosses the line plenty of times, and the cop is justified in his actions and responses. It becomes a matter of pride as to why they don’t surrender and why things spiral out of control.

Bottom line, this was a great start to a great film series! Let’s see how things go from here. Did it start high and bottom out? Or will it be a roller coaster? We’re going to be reviewing the full series this week!

Comparing the Future Portrayed in 'Demolition Man' to Modern Day America
Van Damme to Bring His Film History Together in Final Action Film
Stallone Says 'Demolition Man' Was Ahead of Its Time & Sequel May be Coming
Christmas Countdown: The Top 7 Christmas-Time Action Films
Sylvester Stallone Taking On His First Lead Television Role at Age 75
RoboCop Franchise Films Ranked: #4 'RoboCop 3' (1993)
Sly Stallone Confirms His MCU Return in Guardians of the Galaxy 3