After writing such a positive review for a Tom Cruise movie I was forced to ponder whether my dislike of him is based on his cult membership or the actual substance of his work.  After re-watching The Last Samurai, the answer is: both.

This weird film manages to be both woke and incredibly reactionary at the same time.  It’s got something for everyone – an American talking down America, ahistorical anti-American tropes, and the glorification of the “other” – specifically feudal Japan, which was one of the most sexist, racist and hierarchical places on earth.

When Japan Went Off The Grid

This movie is basically a Japanese version of Dances With Wolves.  Instead of a war-weary American finding peace and love with the Sioux Indians, he goes to Meiji Era Japan to hang with the samurai, who are facing some severe career changes.

You see, under the Tokugawa Shogunate, Japan basically cut itself off from, well, everything.  You want a Hermit Kingdom?  Here’s your Hermit Kingdom.  Trade, tourism, contact with the outside world – all were banned.  The Japanese used to have a thriving piracy sector that specialized in plundering Chinese and Korean coastal villages, but the Tokugawa clan was afraid they might bring home foreign ideas with their loot, so a new policy was put in place that anyone who got off a boat without a bunch of fish in a net was decapitated.

As a result, time in Japan effectively stopped.  From 1639 to 1853, Japan was basically in a stasis field.  This ended when the US sent warships to tell Japan we couldn’t wait any longer for them to develop anime, Hello Kitty and console games and they needed to start laying the groundwork for that right now.

Anyway, the European powers basically walked all over China (something the Chinese have never forgotten) and the lesson for Japan was to embrace Western technology and methods, albeit with some cultural modifications (like KFC for Christmas).

As part of that effort, the Japanese brought in Western military advisors, which is where Kevin Costner Tom Cruise comes in. 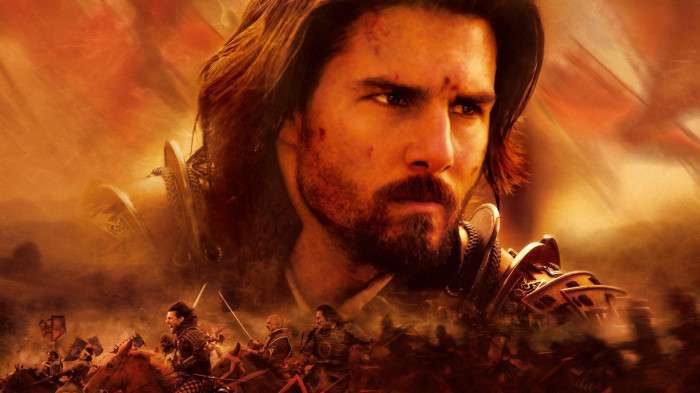 Let’s Just Make Up All The History

There is so much wrong with the history behind this movie that it is probably easier to confine ourselves to the few things in it that actually happened.  The US did fight Indians during the 1800s and it was usually a very ugly situation (for both sides).  Japan did bring in foreign advisors to create a new, modern army (and navy!) and there were sporadic rebellions by samurai.  Some used only traditional weapons, but most were happy to go with the latest in firearms technology.

Other than that, everything else is complete fabrication.  The United States did not supply military advisors – the Japanese first hired the French to train their new army and after the Germans kicked French butt in 1871, switched over to the Germans in 1880.  The entire plot of the film about the US trying to gain lucrative weapons contracts is utter garbage.  What makes this whole concept even dumber is that Japan was hell-bent on making their own guns.  This was the whole point of embracing modern tech and not long after the period in the movie they were cranking out in-house designs like the Arisaka rifle (which was superb) and the Nambu pistol (which wasn’t).

The time frame is also randomly stapled together from real and imagined events.  The writers conflate the uprising of 1868 with that of 1877, but they were completely different in substance.  Cruise’s character is actually based on real-life person, Jules Brunet, a French Army officer who led the training mission sponsored by his government.  Because the Shogun was still calling the shots, that’s whose men he was training, when the Shogun got into a fight with forces loyal to the Emperor, Brunet and some of his men elected to stay and fight alongside their troops.

But they weren’t fighting to Make Samurai Great Again, oh no.  They actually tried to carve out their own little kingdom.   It failed, and Brunet and his boys went back home to France.  That’s the real story.

I get that Hollywood takes great liberties with history, but we are literally in “Was it over when the Germans attacked Pearl Harbor?” territory. 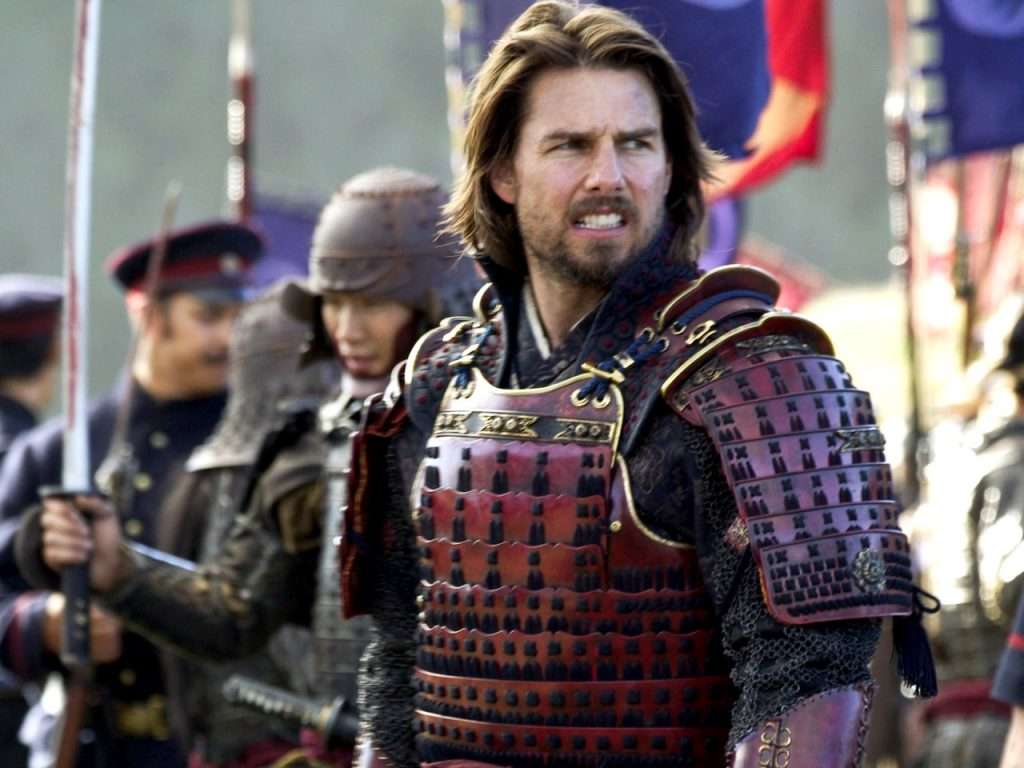 If you don’t know enough of the history to recognize it’s fake, that’s okay, because the substance of the movie itself is even more awful.  Cruise is supposed to be some badass but battle-weary soldier disgusted by the carnage of the wars against the Indians.  Apparently, it never occurs to him to just quit the weapons business and work on a farm or something.  Nope, he’s soon off on a boat to Japan where his loathing of his own people and culture will be transformed into admiration for the noble, beautiful and ultra-violent samurai.

The movie soft-pedals this, but understand that before the Meiji Reforms, the samurai literally did nothing all day but practice swordplay, paint pictures and write poems.  That’s it.  That was their work load.

Meanwhile, an army of peasants waited on their every need, growing their food, making their stuff and literally had to grovel before them on all fours on pain of instant death every time they walked by.  Truly an ideal society.

This is where the whole “woke” thing turns in on itself because if you wanted to create a more socially unequal, patriarchal system, feudal Japan would be hard to beat.  The currency of exchange in Japan was rice, and the peasants had to give 40 percent of their crops to the samurai so that they could sit on hilltops and admire the cherry blossoms with full bellies.  By the mid-1800s, the peasants were literally starving to death because the samurai kept demanding more food.

The reason the samurai were pissed was that the Japanese government realized this was unsustainable and their new policy for the samurai was essentially:  “Get a frickin’ job!”

A bunch of samurai decided their answer was:  “Over our dead bodies,” so the government took them up on the offer. 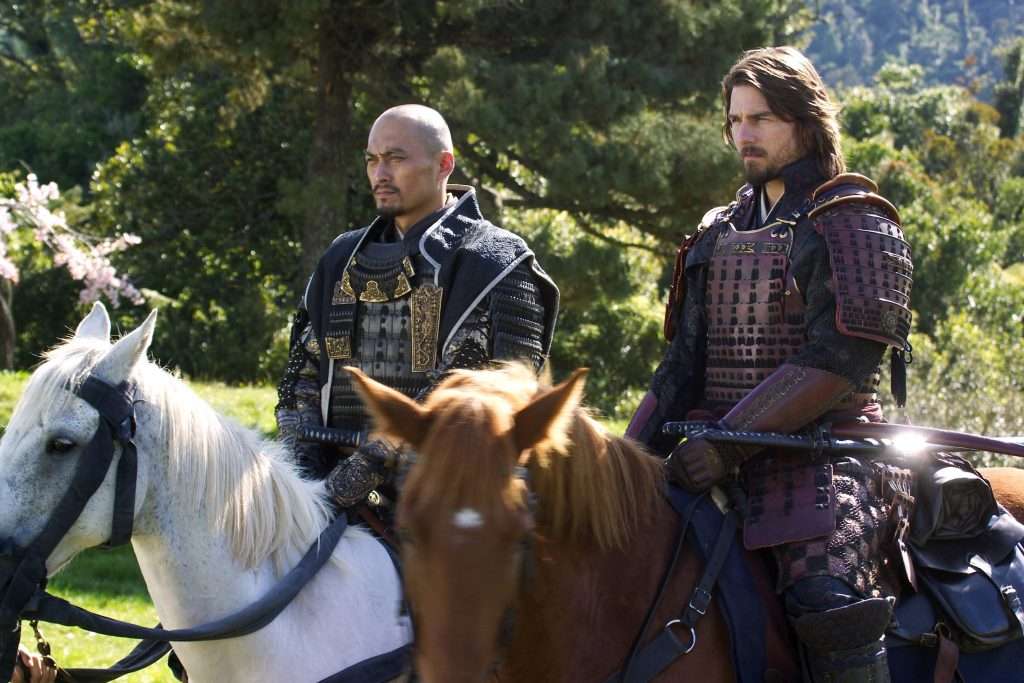 The final insult is the way Cruise’s character embraces all of the familiar tropes about a foreigner learning a new culture.  Initially arrogant, he learns humility, finally experiences true religion (which cannot be Christianity, of course) and predictably wins over his hosts with his honest admiration.

He’s also an amazing warrior, and from his first scene shows those samurai how real fighting is done.

So even in a movie that celebrates Japanese traditional martial culture, the white guy pretty much comes up to speed with the best of them in a matter of weeks.  No, that’s not patronizing, not at all.

Oh, and his humility and handsomeness are so great as to overcome the other big issue of the samurai traditionalists – having mixed-race children.

Yeah, I saved that for last.  Not only did the samurai want to keep their do-nothing jobs, they wanted all the foreigners out and actually launched an assassination campaign to put this into effect.

So the same people who were attacking foreign diplomats for the crime of being white suddenly find Strange New Respect for Cruise’s character.  In fact (to paraphrase R. Lee Ermey), they like him so much, he can marry their sister!

Now given all of the things wrong with this film, some might ask me why I bothered to watch it again.  The answer is that a friend suggested it and the timing coincided with my writing about this period in my upcoming book on Chinese military history.   All of which made me hate it even more than because I now knew how much more wrong it was.  (See that turn of phrase?  I write good.)

At any rate, every copy of this film ought to be burned as an offering in a Shinto shrine, but since that’s not feasible, it should be highlighted as the most woke-twisted piece of garbage in film history.

Well, at least until a new Disney movie comes out.