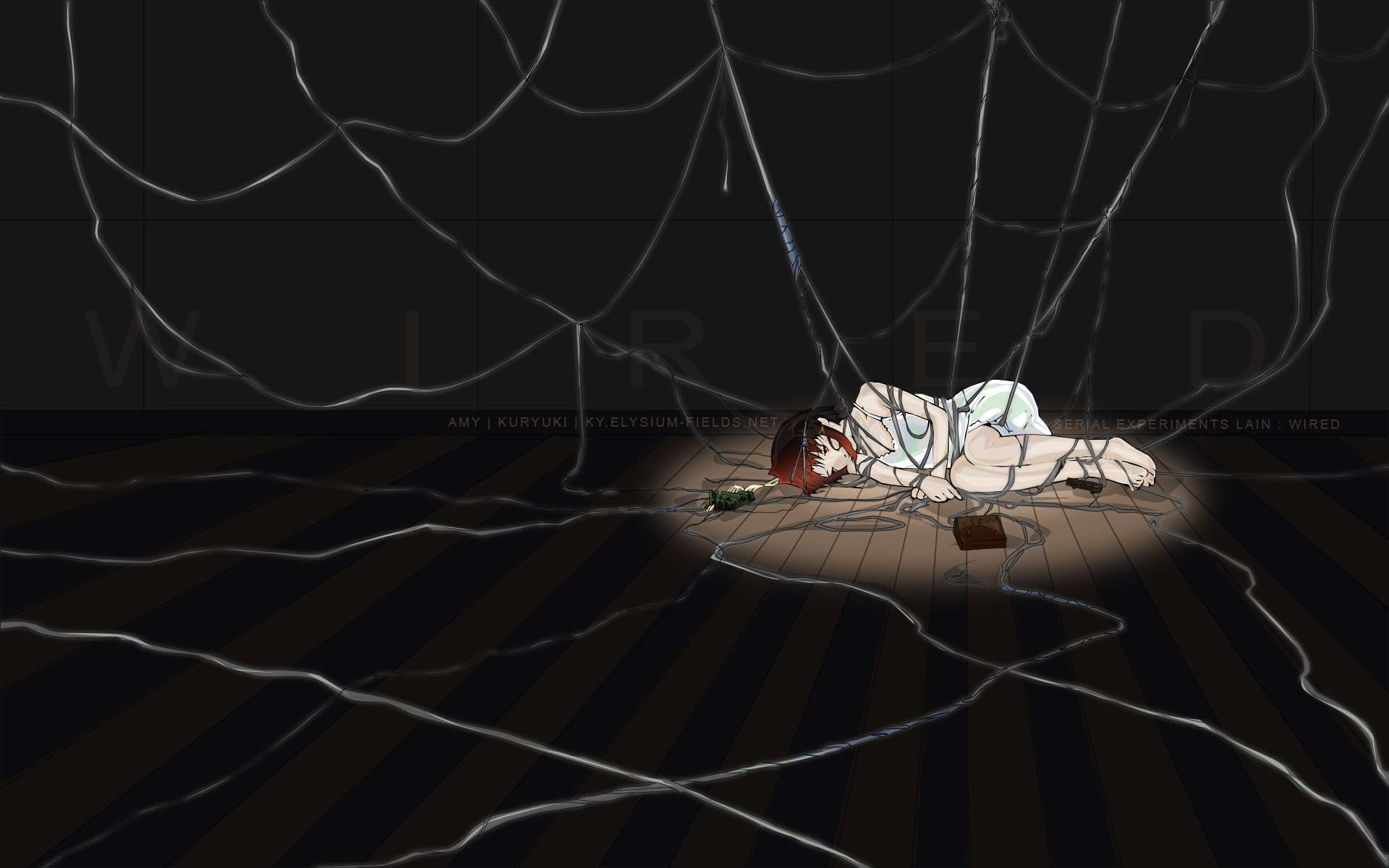 Matrix Resurrections (2021) having been released this passing December brought me back to the hallowed altar of Sci-Fi. The Matrix itself now an old franchise that was young and kicking in bullet time during the prime of my teen years garnered a re-watch…

Starting with The Matrix (1999), continuing on to The Animatrix (2003), then to Matrix: Reloaded (2003), then Matrix: Revolutions (also 2003), and finally ending with a recent trip to my local AMC for the aforementioned Matrix: Resurrections. It was no ‘Lazarus’ moment, but confirmed what I already knew; that The Matrix and I had parted ways with each other 18 years ago and that that separation was, and is, still final.

It also brought to mind an anime with familiar elements at work. That anime being 1998’s Serial Experiments Lain. 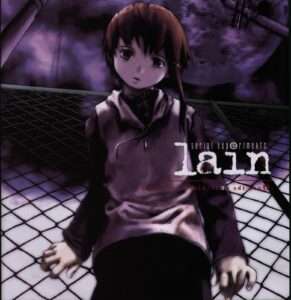 Written by Chiaki J. Konaka (Digimon Tamers, 2001), with character designs by Yoshitoshi Abe (NieA_7, 2000), animated by Triangle Staff (Macross Plus, 1995), and directed by the late Ryūtarō Nakamura (Kino’s Journey, 2003), Lain is tonally quite different than The Matrix in that there is no gun-play or martial arts action to bridge exposition dumps along.

Serial Experiments Lain is a moody endeavor more concerned with unsettling its audience than delivering thrills. Plot wise though, it has some themes in common.

Lain (voiced by Bridget Hoffman, Mima from Perfect Blue, and Shinobu from Love Hina) is a reserved junior high student, who, follows her own Lewis Carol symbolism down the proverbial rabbit hole when her friend Alice (voiced by Emilie Brown, Melfina from Outlaw Star) tells her that a classmate, Chisa Yomoda (executed briefly but effectively by Lia Sargent, R. Dorothy Wayneright from Big O), has committed suicide, and that emails have been sent through the Wired (an advanced form of the internet) to those in class from her posthumously, everyone assuming it is some sort of sick prank.

When Lain gets home, she checks her Navi (computer) and discovers an email sent to her from Chisa, thanking her for a walk home from school some time ago. Lain replies with questions, asking why she took her life, how can she be sending email, and where is she?

Chisa’s replies are that she is now in the Wired, and invites Lain to join her, stating that “God is there”.

As the series progresses the real world appears to merge with the Wired due to a new technology, Protocol 7, being fully implemented with the purpose of enhancing the Wired, but in actuality it is breaking down the barriers between physical reality and the Wired’s virtual one by penetrating the collective consciousness of humanity. 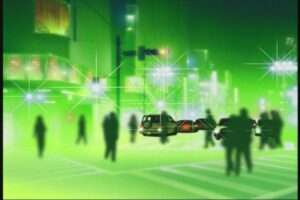 At this point Lain’s abilities begin to border on omniscience.

The series reaches its zenith when Lain finally discovers the aforementioned “God” in the Wired, Masami Eiri (Sparky Thornton, Satan of the briefly hot, but still awesome, Blue Exorcist), a scientist who helped develop Protocol 7 before downloading his mind into the Wired prior to his untimely death.

Eiri tells Lain that she is nothing more than software he created within the Wired, implying her physical self, family and thus the life she’s known are somehow constructed by design.  He further conveys that with Protocol 7 in place, humanity’s inevitable evolution is to abandon their bodies and live in the Wired through virtual avatars, a Wired he controls, making him truly akin to a God.

In the final episodes, (Spoilers) Lain proves superior to her apparent creator when Masami Eiri destroys himself trying to manifest into the physical world to accost her and Alice. Lain is revealed to exist as multiple variants of herself (four is the prevailing theory) in both plains given her respective presences having been merged due to Protocol 7. 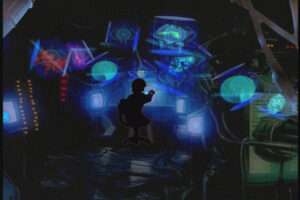 Even though this fully realized Lain can now affect all of reality through this protocol, she subsequently purges herself from everyone’s memories, choosing to exists sub-audibly, becoming an unseen deity, bringing the series to its conclusion.

Lain Iwakura, like Thomas Anderson, or “Neo”  (Keanu Reeves, duh!), starts off as an unremarkable, average person going about a normal daily life at the beginning of her journey, and like Neo she is at odds with a technological colossus threatening all flesh. 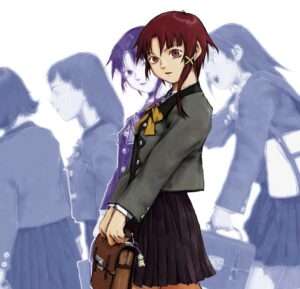 The philosophical concept of what constitutes reality is shared between both stories, as well as what it entails to become something Holy, a subject which seems strangely comfortable in cyberpunk trappings (see Ghost In The Shell franchise, Blade Runner franchise, Key The Metal Idol – 1994).

Though the Matrix borrowed nothing from Lain, nor vice versa (Lain debuting a year before The Matrix after all), both stories are meditations on technology and humanity, reality and virtual reality, but part ways at what their intended goals seem to be.

The Matrix is action cinema at its finest, meant to satisfy the need for entertainment while being cerebral. Serial Experiments Lain is speculative fiction at its eeriest, meant to be unnerving, and darkly touching while being quite tricky to understand.  There are plenty of visual clues throughout the anime which indicates that much of what is going on with Lain is a breakdown of her mental health, and the unsettling avant-garde imagery are hallucination or delusion.

Chiaki J. Konaka even stating in an interview that Lain suffers from bad mental health. This puts all 13 Layers into a very different light. 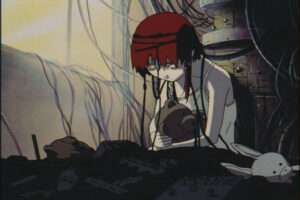 Regardless, Serial Experiments Lain, and The Matrix share another theme in common, that seemingly mediocre people can become more than what they are.

To revisit an old, venerable cliché, all things are but a sum of parts, but those parts together can prove to be far greater than their whole. This is what The Matrix and Serial Experiments Lain tell us when we look back on their protagonists Neo, and Lain respectively.

That, if anything, is at least inspiring, if not profound.