Ai Yori Aoshi (藍より青し, “Bluer Than Indigo”) is a Japanese manga series written and illustrated by Kou Fumizuki. It’s a love story between two characters who have not seen each other in years, but were once childhood friends. An anime television series adaptation was animated by J.C.Staff and directed by Masami Shimoda, with Kenichi Kanemaki handling series composition, Kazunori Iwakura designing the characters and Toshio Masuda composing the music. The anime was originally broadcast on Fuji TV in 2002 and a second season titled Ai Yori Aoshi: Enishi (藍より青し ～縁～) was set two years later and aired in 2003.

The story follows Kaoru Hanabishi,  a lonely college student living a frugal, but for the most part content life on his own. Kaoru was orphaned at a young age, and estranged from the wealthy, yet abusive relatives that he fled years ago. Our other main character is Aoi Sakuraba. She is the daughter of an equally affluent family, and was arranged to be Kaoru’s wife when they were both little. Because Kaoru fled the Hanabishi, and no explanation given to Aoi as to why he fled, she seeks him out in adulthood (successfully), accidentally running into him at a train station.

Having not met since childhood, neither realizes who the other is initially until a picture of them as kids is thrown into the mix, and the two find themselves inseparable from then on out. They are moved into a secluded mansion together to avoid scandal by the Sakuraba family, and placed under the watchful eyes of Miyabi Kagurazaki, Aoi’s caretaker, handler, and surrogate big sister.

Obligatory to the ‘Harem Genre’, additional women are subsequently added throughout the following episodes, or in the manga’s case, volumes, to complicate the hell out of his life. 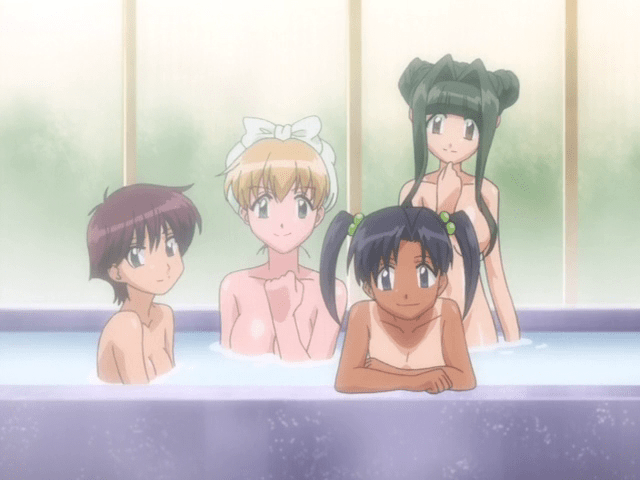 There’s Tina Foster, a jocular Texan who used to try and cheer Kaoru up at college through teasing; Taeko Minazuki, a buxom though clumsy woman who finds Kaoru’s gentle nature attractive; Mayu Miyuki, a rich girl with busy parents, Kaoru was kind to her, and now she’s enamored with him; Chika Minazuki, Taeko’s cousin in high-school, who, tries to get Kaoru and Taeko together whenever possible; and lastly the aforementioned Miyabi Kagurazaki, the woman who raised and trained Aoi into the woman that she is.

What makes Ai Yori Aoshi unique to its genre is that unlike other Harem entries, the main couple has already succeeded. 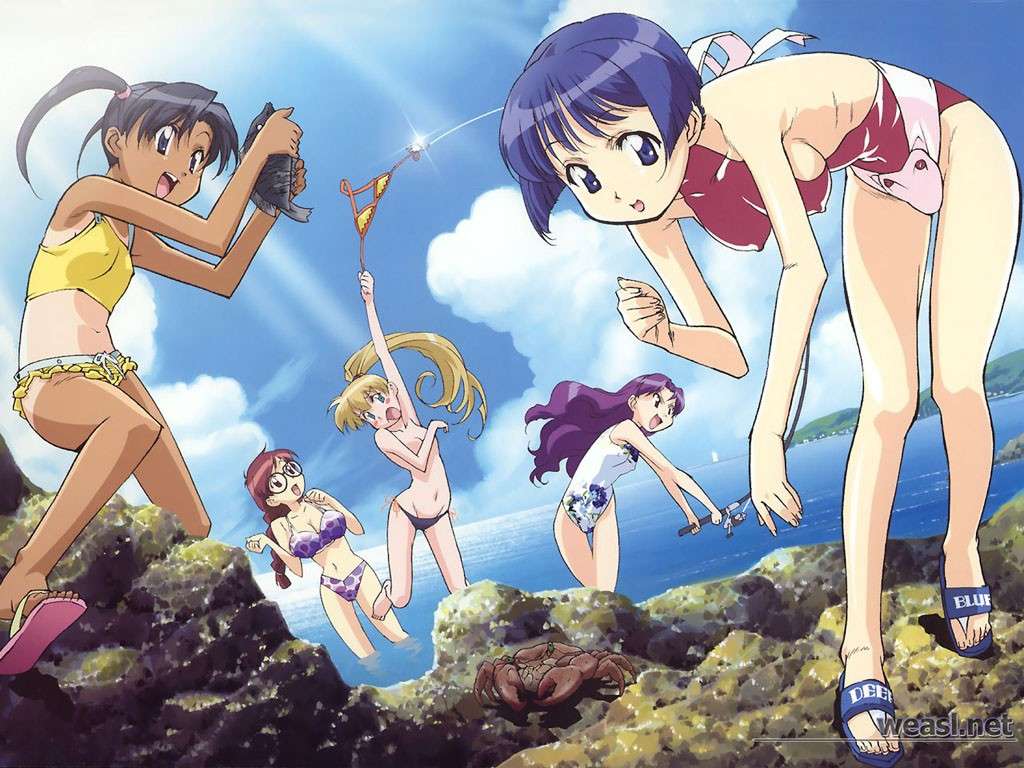 Typically in these wish fulfillment publications, the primary love interests go through the turbulence of the hapless male lead developing into a dependable man between mixed signals, family/friend interference, and the outside temptations of other women added to the cast. Meanwhile, the female lead is cold or hostile until she realizes that begrudging crush she’s harboring is actually love, and accepts the male lead’s affections.

Kou Fumizuki dispenses with all of that right off.

Kaoru, and Aoi are fated. Red String fated. Their fidelity to one another adamant. In all 36 anime episodes, and all 17 manga volumes (warning spoilers) ending with their marriage, the two hurdle every relationship obstacle with the inevitable ease of a trained Olympic athlete. And while this takes the impact out of the added female companions thrown in, Fumizuki uses their interactions, and unrequited love for Kaoru, to explore who they are.

With Christmas upon us, it would behoove me to acknowledge Ai Yori Aoshi’s entries on Christmas. Japan observes it a bit differently, specifically Christmas Eve, as something of a romantic holiday. 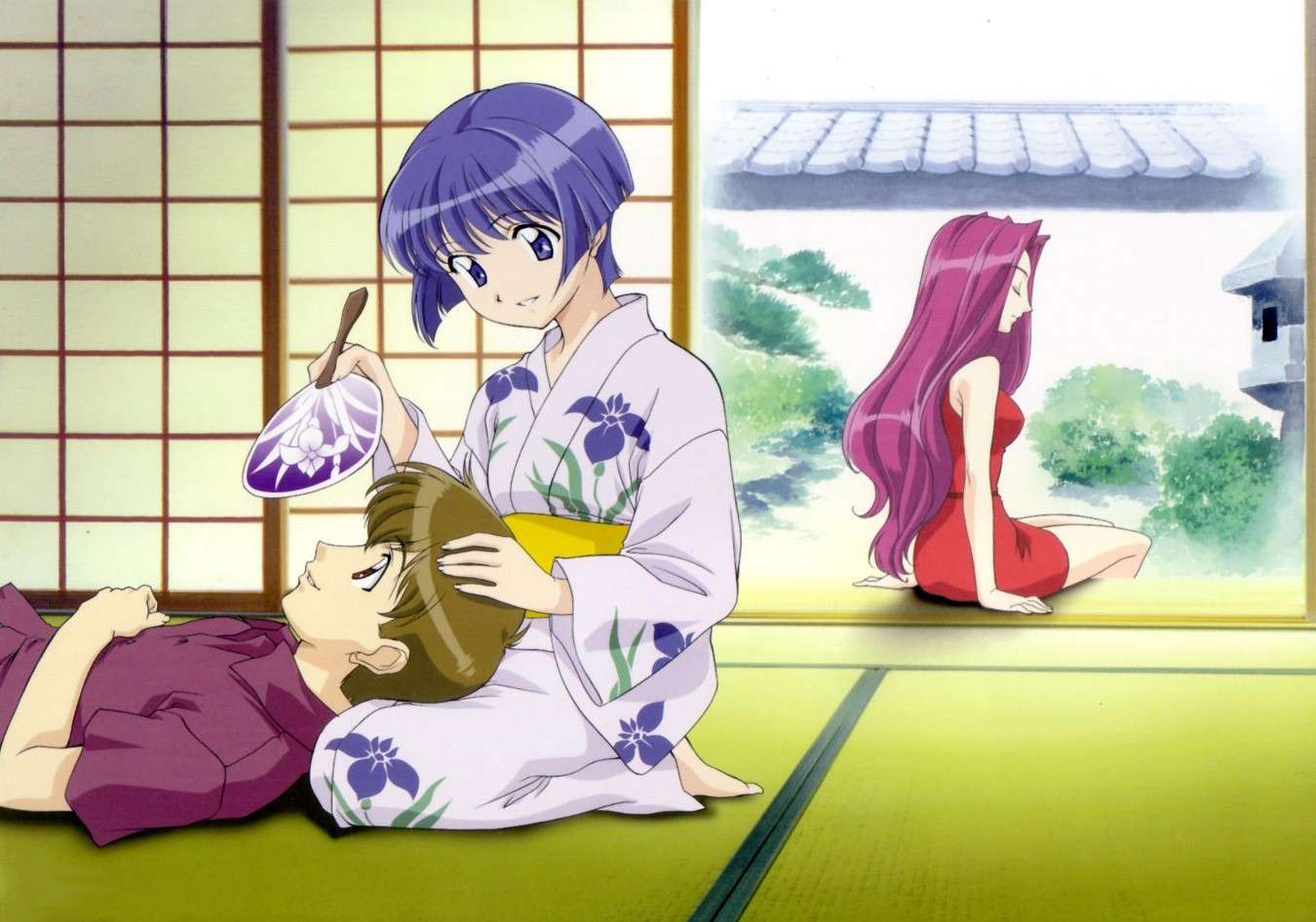 ‘Miyuki’ is a bit of a strange anime episode from Ai Yori Aoshi Enishi (second season) story wise. Taking place about a year canonically before Kaoru and Aoi meet, Kaoru encounters ‘a Santa’ as Santa is apparently multiple magical entities, and this one happens to look exactly like Aoi (perhaps a foreshadowing of the future to come), capable of phasing through walls like a phantom.

Santa spends Christmas with a morose Kaoru. While one might expect this to take a seamy turn (there is fanservice), the episode is actually an exploration of Kaoru’s loneliness. It’s a great character-centric outing, or as this article by TWWK from beneaththetangles.com describes it:

The special episode of Ai Yori Aoshi Enishi, entitled “Miyuki,” is a fantasy. Like episodes of old sitcoms that cross the line into the fantastical for one episode, Ai Yori Aoshi does likewise

Manga chapters 20-21, titled ‘Doubt’ and ‘Koutansai Christmas’ respectively, tells a more grounded story. Kaoru, excited to be celebrating Christmas with Aoi, and subsequently Tina and Taeko, who’ve moved into the mansion as renters, notices a Christmas themed dress with matching boots while out shopping with Aoi. Thinking she’ll look cute in the dress, he decides to buy it for her as a Christmas gift. 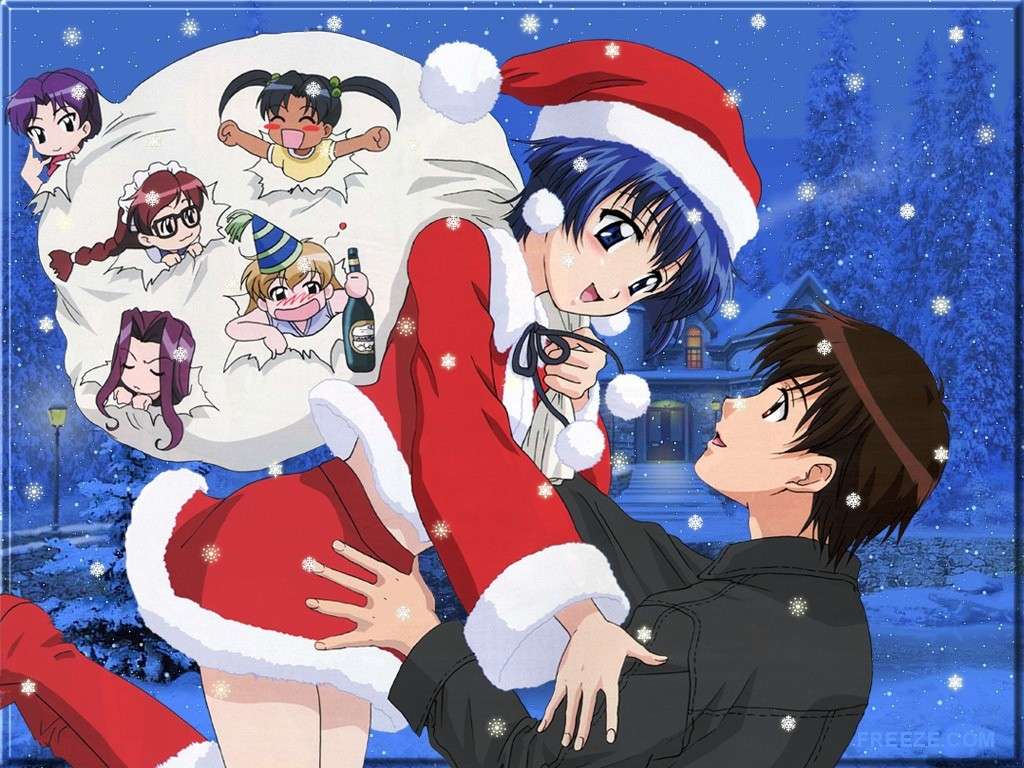 Having not seen Aoi in anything other than her Tsumugi (this wordpress can explain), the thought of seeing her in something else is desirable. When he realizes that his present funds are inadequate, and with only two weeks until Christmas, he takes on multiple seasonal jobs. Kaoru makes the money by Christmas Eve, but is crushed to find that the dress is already sold out everywhere.

That night, after partying with Aoi, Tina, Taeko and Miyabi, Kaoru finds a note from Aoi saying to meet her outside the mansion by a tree in the yard. Arriving, he finds Aoi in the dress he’d been slaving two weeks to buy for her. Aoi saw Kaoru staring at it the day they went shopping together, and bought it to wear for him. Ecstatic that Kaoru loves how she looks in it, Aoi is embarrassed about her feet, as she’s wearing sandals and not the boots, those having sold out. Kaoru reveals the matching boots with a smile.

In searching all over to find a shop with the dress, Kaoru managed to get the boots. Apparent destiny having completed the ensemble, the two share the rest of the evening together as snow falls. Such lucky fate rarely befalls most shoppers in the madcap Christmas scramble here in the States, but with December ahead of us, and Black Friday behind us, take time to enjoy the season for what it is with family and friends, and maybe a little Ai Yori Aoshi too!

You can watch the series for free here. Happy Holidays! 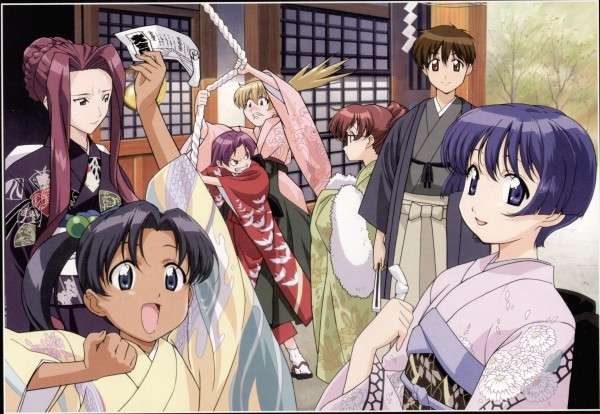