Alterna Comics – They Might Be The Company We’re Looking For

by Jon Del Arroz
|
Alterna Comics ran a 25% off sale over black Friday weekend, so I opted to check them out a lot more than I had in comics shops prior (I’d picked up a couple of issues). I picked up their entire catalogue of books from June – October for about $25, pretty incredible given the giant stack of books I received.

This morning I read through a few of them so I could accurately report my findings on the company.  They’ve been intriguing me as they push a lot of cool creator owned content that looks a little different than your average fare — and then the best part, is their books are $1.50. They’ve done this by just printing on newsprint and not on the fancy paper that most comic companies use these days.

Here’s the first hot take: the reading experience of a comic is not any different being on newsprint.

The colors bleed a little more and aren’t quite as crisp, but for the most part that doesn’t really impact the book. It didn’t deter my enjoyment at all. Now I don’t think a hyper-realistic style that some of the modern books use would work in this, but for real comic art, it doesn’t pose a problem in the least.

I read through at least the first issue of all of their titles that came out from June – Oct last evening, and I found most of them to be throughly enjoyable. The books are all over the map in terms of content, and what’s advertised has pretty much been what the books are. So if you’re into some more uplifting fun stuff, family friendly, science fiction, horror, post-apocalyptic serious stuff — it’s all there. You can easily pick and choose to your tastes or go through everything like I did because it’s so inexpensive. The covers are pretty accurate in telling you about what style or age range it’s going to be in.

Regardless, here’s my quick takes on what i read: Adam Wreck – Super fun science fiction. A boy crashes a space ship (hence wreck). Cute characterization, good fun, interesting color schemes, though it is kinda odd  to look at and it  makes the art look a little undetailed. It still works well as a story with a lot of fun elements  from space pirates to giant tentacle creatures. I  read  the whole story, and it was good,  though probably  could have been condensed to 2 issues (there’s a prequel story halfway through issue 3 to round out the content). Enjoyable. B 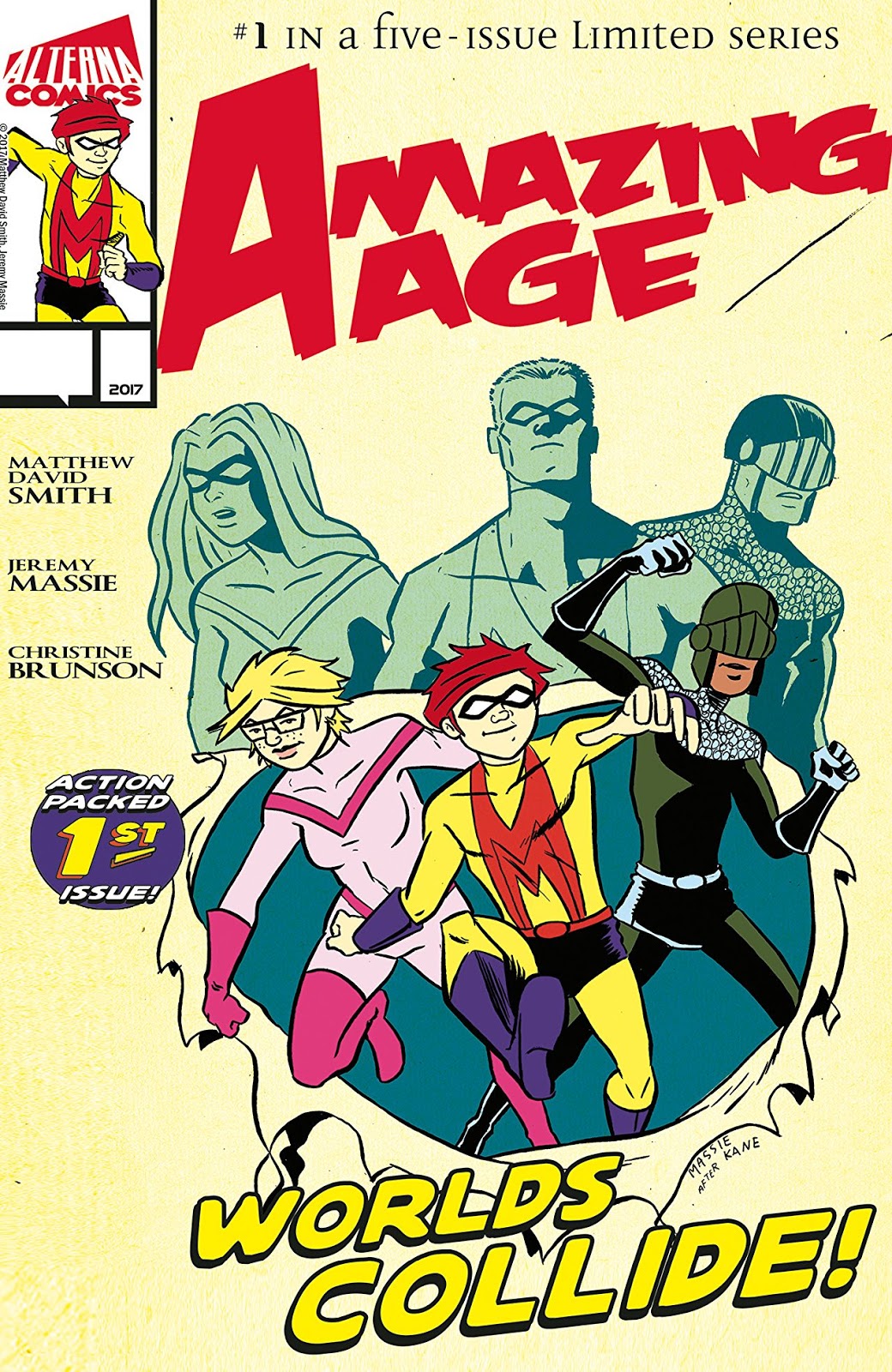 Amazing Age – This is a story about a kid who drew comic heroes, and eventually re-found his work in high school after everyone had kinda grown out of it. He and two friends are sucked into the comic book, where the world is about to go into an epic battle of good vs. evil. It’s really cute all the way through, and is apparently based off of creations made by the writer when he was a kid. 3 issues are currently out and this really put the fun back in superheroes. A The Chair – By far the darkest book of the Alterna line. this is really heavy dark horror. Which is very much not my thing, so it makes it a bit hard to judge for me on  that front. The tone of the dialogue and the story are definitely on track. However I have to say — the  layouts and the art make it a bit hard to read. Sometimes the lettering really eats up the page, and the art is sparse on detail and leaves a lot of black background a lot of the time. Tough book. C- Croak – Strange things in the woods kind of horror. Art was pretty nice, and good for the genre. It  opens up in the first issue into something pretty darn interesting,  but it takes awhile to get there. There wasn’t enough of a hook at the beginning of the issue, though there is  by the end. I  wish over the course of  the series there was a little more of the characterization to make us care about the characters, and some more explanation for events. B- Lilith Dark –  Pretend time Lilith plays at being hero and has great adventures in her mind She goes down a rabbit hole alice in wonderland style and some really cute hijinx ensue. I’d read this before and it’s what drew Alterna to my attention. A+

Mother Russia – I looked at the cover and conceptually based on what I’d thought, I wasn’t super interested. Seeing black and white inside also scared me, but actually, this might be my favorite Alterna comic. A girl survived a zombie apocalypse in WW2 Russia and teams up with a couple other survivors (including a dog and a baby) to try to survive. My only complaint is I wish there wasn’t swearing in it, as I think it doesn’t add much to the story, including the feel, as the dialogue is supposedly translated from Russian. The dialogue comes off sounding very 2017 at those points which is unfortunate. Still the plot and art and characters are wonderful, I love it.  A 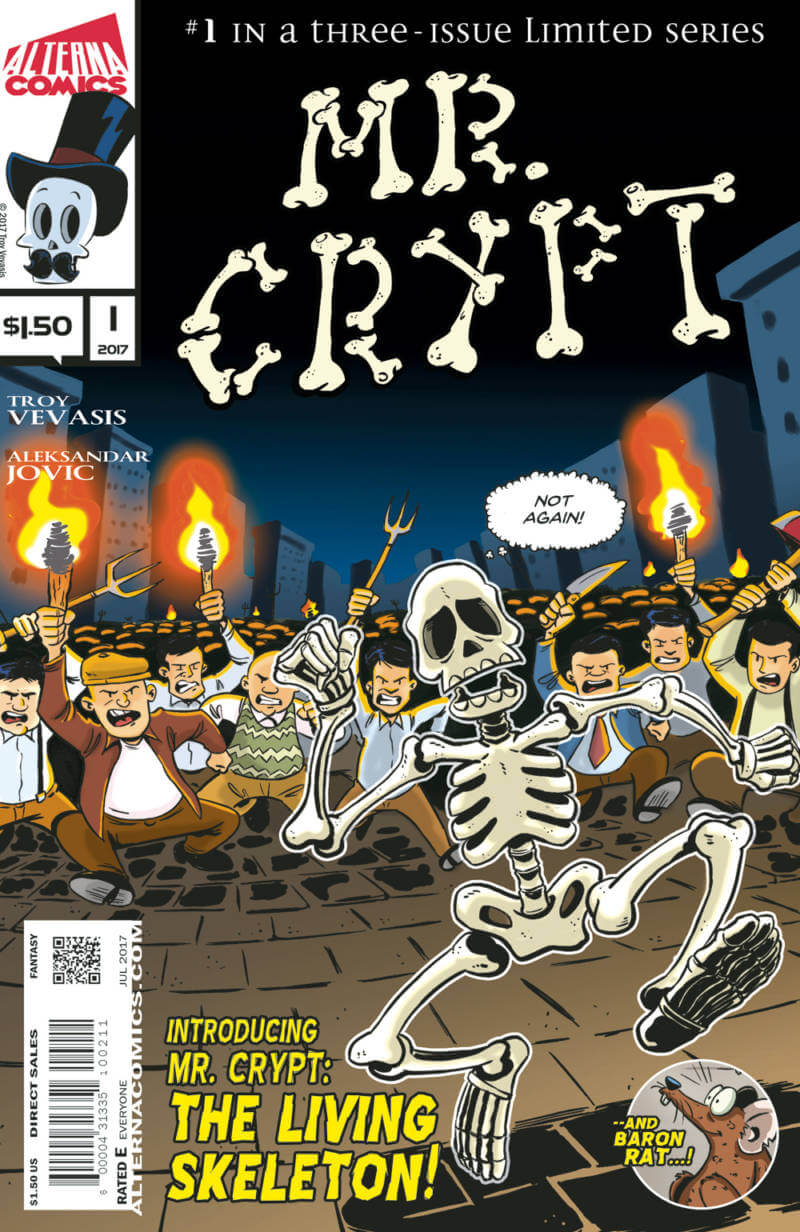 Mr. Crypt – This is off the wall comedy, sorta reminding me of a Frankenstein or Casper the Ghost concept. Crypt’s on the run, cuz no one wants a skeleton around, but when he puts on a top hat and mustache, no one can tell who he really is! He makes friends with a rat. It’s a bit disjointed on the writing end, more like a series of shorts than something super cohesive in the first  issue, and i wish there were a tad more story to it. Silly and fun though, so I cut it some slack. B- 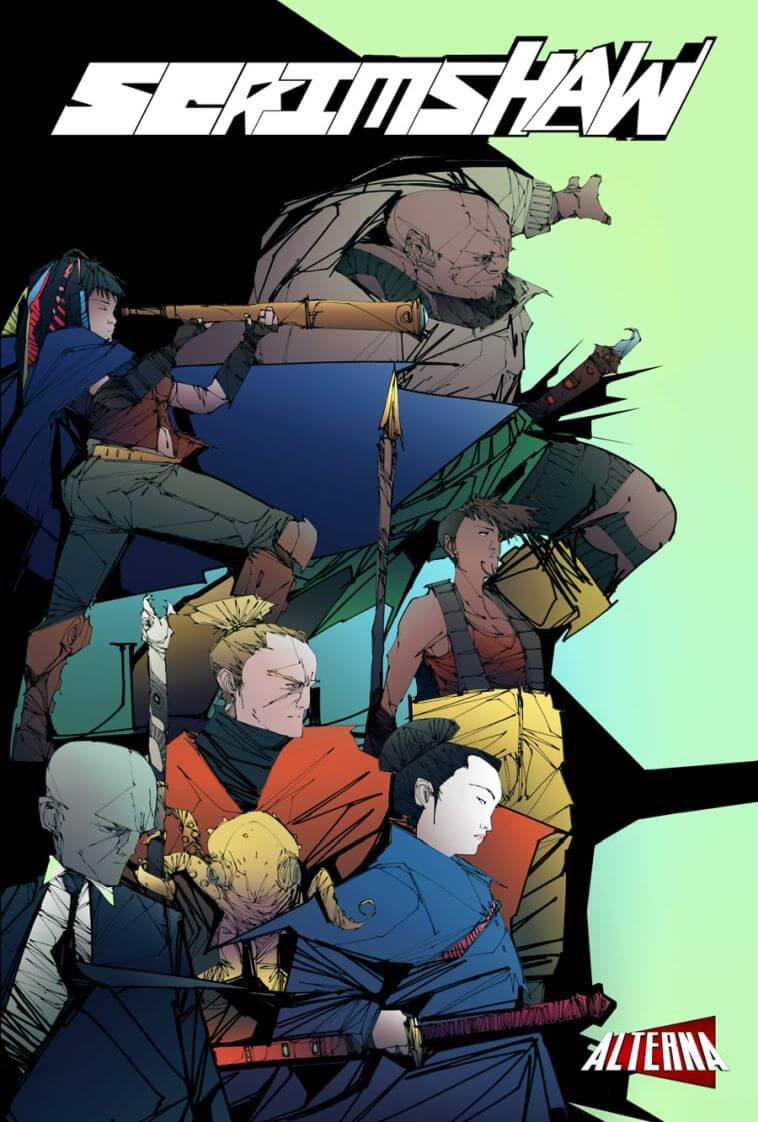 Scrimshaw – This book gets a lot of promos on the web and in their advertisements. It’s a future where the world went through an apocalypse and came out the other side, and some strange stuff is happening. I’ve only read the first issue, but it didn’t give me quite enough meat as to what’s going on in the geo-political sense for me to hook into it. The art is a bit confusing and overdrawn, which makes it a tad hard to read. Interesting world, and I’ll keep reading but not my favorite so far.  C

Tresspasser  – Another one I wasn’t so sure I was going to be interested  in based  on  the cover. Nice art, again  maybe  one of the nicer of Alterna’s  but it looked to have a kinda darker tone to it  (and I like lighter tones). The tresspasser, spoilers, is an alien who shows up. It’s pretty decompressed but dang I’m interested in this story. It’s kinda creepy horror but  not shock-dark. Pacing is a bit decompressed and slow is the only qualm with it. Great characters. A- 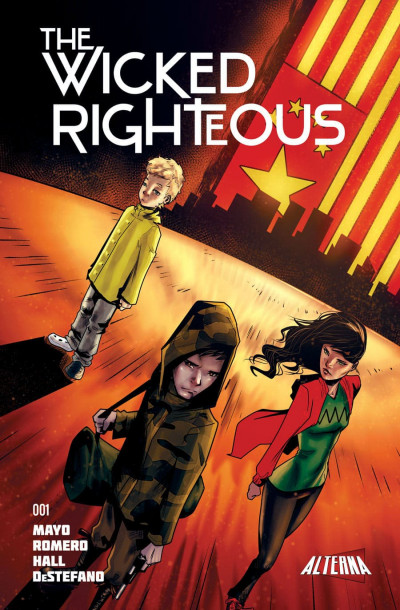 Wicked Righteous – Interesting Post apocalypse where a bunch of adults seem to have died from a virus. The first issue was interesting and I like the characters introduced, but I still don’t quite get the world, it needed a little more definition to those world building elements for understanding. Could be fixed in future issues but it needed more of a grounding for the first here regardless. Art is one of the better for Alterna’s work. We’ll see how this proceeds. B

As you can tell, the whole line has interesting points to it, and as I said the tone and style were all over the map so it’s a bit harder to judge based on what an Alterna book should look like, so I focused on storytelling elements. I’ll probably continue to pick up their whole line going forward cuz it’s like $6 a month to get 4 books or so, which is ridiculous, and I like what they’re doing.

If you like cool space concepts with heart, you’ll probably enjoy my recent novella, Gravity Of The Game, which is getting a lot of buzz for a Hugo Award nomination. Check it here.