Disney has once again proven they are willing to put ideology over profits, even if it means withholding their latest children’s animated films from international markets because gay teen romance is too important to the story they want to tell. But apparently this approach isn’t looking too good for “Strange World” since on it’s opening day the movie only made $800,000 dollars and projections show it’s bombing over the holiday weekend. Usually, the Thanksgiving holiday’s extended weekends are owned by Disney, but at its current trajectory “Strange World” should end up becoming Disney’s lowest-grossing animated feature family film in a very long time.

To put things in perspective, “Lightyear,” which was considered a Disney flop earlier this year, had a $5 million preview night and went on to gross $118 million domestically (and $100 million abroad).

To explain this disaster, industry insiders are seemingly convinced that those missing potential viewers may believe they can simply wait to see “Strange World” on Disney Plus. But if this is truly the case, theaters may be in for a difficult season ahead. Somehow the exact same schedule didn’t impact Encato, which also had a 30 day window to streaming, so that theory doesn’t hold water. 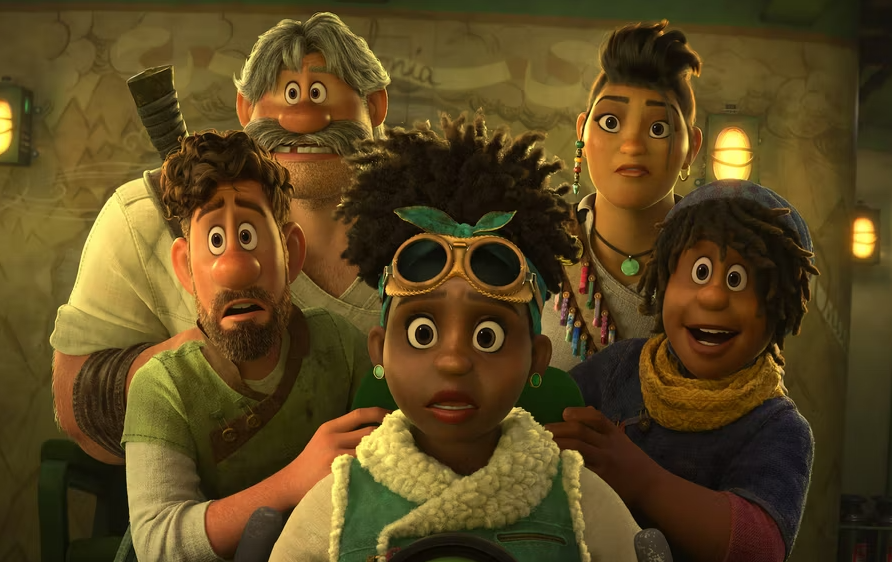 Directed by Don Hall and Qui Nguyen and written by Nguyen, Strange World was released in theaters this week and is the third major animated feature to be released by Disney this year after Pixar’s Turning Red and Lightyear. Starring Jake Gyllenhaal, Jaboukie Young-White, Gabrielle Union, Dennis Quaid, and Lucy Liu, and Jonathan Melo, Strange World brings viewers into the fold of a new adventure and story centered on a family of explorers with heavy emphasis on same sex teen romance and environmentalism.

Roger Friedman at Showbiz 411 reports that this looks to be the lowest family movie debut in Disney’s modern history:

“…at this rate, “Strange World” will reap around $20 million from Tuesday- Sunday. That will be the lowest first week, or six days, probably in Disney modern history. Families are obviously waiting for this film to be on Disney Plus, or they just don’t care at all.

Luckily, Disney doesn’t have to care either. They have “Wakanda Forever” at $313 million, but slowing down precipitously. Maybe audiences will move on to the half dozen or more adult movies in which no one flies except maybe on an airplane.”

The movie reportedly cost the studio $135 million, and if this pace remains the same, earning around $20 million or so over the five day weekend, then the studio is going to lose A LOT of money.

Breitbart News notes the sleight of hand tricks that outlets like Deadline are now deploying to try to diminish how big a deal this actually is:

I give you Deadline’s anti-science excuse for Strange World’s box office disaster:

One former Disney exec once told me, “They’re very good at making the best worst case decision” and in the scenario of Strange World, that’s sending it to Disney+ by the holidays.

And why would the liars at Deadline hide that rather pertinent fact from gullible readers? What we got here is a real head-scratcher. Deadline also tried to soften the blow with this sleight-of-hand:

That’s not the worst for a Disney animated pic, particularly over Thanksgiving, but it’s damn close: Their $140M original animation movie Treasure Planet was in freefall back in 2003 with a 3-day of $12M and [5-day of] $16.5M.

Except you forgot inflation. In today’s dollars, $16.5 million equals $27 million, which, according to my public school math, adds up to more than Strange World’s $20 to $23 million.

Mr. H discusses some of the massive problems the studio is facing.

The reviews for the movie aren’t faring so well either, with dismal audience scores at both Metacritic and Rotten Tomatoes, and the usually reliable professional critics don’t seem too impressed either. 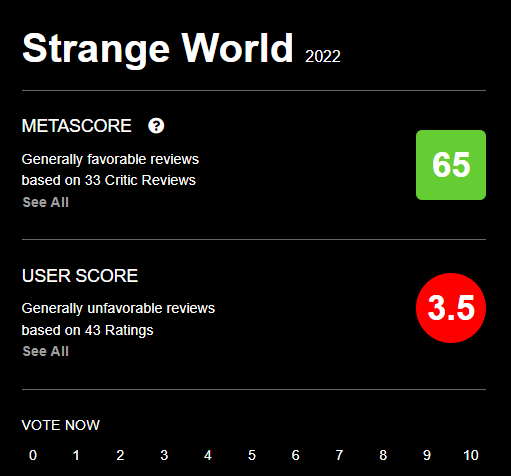 While most of the critical reviewers make good points, it’s the critical audience reviews that really tell the tale. Meanwhile, few names in the Hollywood media are willing to entertain any notion that that the film is struggling because most families aren’t interested in taking their small children to an animated feature that centers on gay teen boys in love.

Thankfully John Nolte at Breitbart is not among the cowardly Hollywood press, and as he reports, the studio has doubled-down on including gay conent in their children’s entertainment, even though it hasn’t work out well before.

This is the second time Disney has tried to sneak innocence-shattering homosexual material into a children’s movie. It blew up in the groomer’s smug face the first time when Lightyear tanked. Yeah, someone at Disney thought it was a good idea to add homosexuality to the Toy Story franchise.

Nolte also expects the failure of this movie to connect with American families will be blamed on parents who refuse to let Disney “groom” their children with the normalization of gay relationships for kids:

We all know what happens next if Strange World bombs. We bigots and homophobes will be blamed.

America is getting tired of the unbearable wokeness of Disney, and to prove it, this movie is scoring lower than any Disney film in the last 30+ years of Cinescore. And since boys generally don’t care for romance stories, much less gay ones, this looks like another obvious case of “get woke, go broke.”