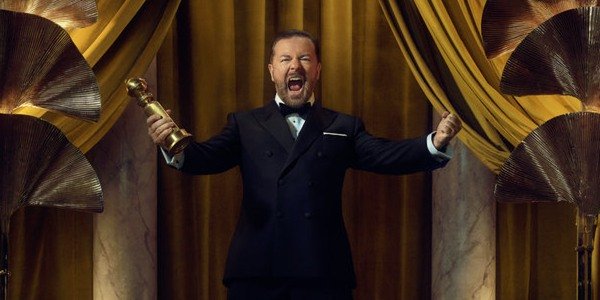 Golden Globes 2020 host Ricky Gervais skewered the Hollywood players last night during his opening monologue of the annual award show on Sunday, cracking several jokes about virtue signaling celebrities, Jeffrey Epstein (who he called “your friend”), and even the sweatshops run by Apple.

“So, if you win, come up, accept your little award tonight, come up, accept it, thank your agent and your God, and fuck off. No one cares about your views on politics or culture.” Gervais told the aghast crowd at the opening of the awards show. “You know nothing about the real world. Most of you spent less time in school  than Greta Thunberg,”

Gervais was truly savage with Apple, which recently entered the streaming wars with their foray into the entertainment business last year with the debut of Apple TV+. CEO Tim Cook was in the audience for the ceremony when Gervais started by complimenting Apple’s The Morning Show, which stars Jennifer Aniston and Reese Witherspoon.

He then went #savage

“A superb drama about the importance of dignity and doing the right thing made by a company the at runs sweatshops in China,” the actor-comedian said. “If ISIS started a streaming service, you all would be calling your agents.”

Watch the whole thing below. Watch until the end:

Ricky Gervais just gave the best opening speech at the #GoldenGlobes ever.

Now it should be said that Ricky Gervais is not a supporter of conservatives, far from it. Gervais is actually an enthusiastic Labour supporter in the UK. Most comedians are nihilists, and Ricky is in fact an atheist to a very intense degree, but the fact remains that he isn’t afraid to be an equal-opportunity offender and he should be free to speak his mind, as well as channel the voices of the silent majority that usually gets scolded or lectured by the Hollywood elite.

Everyone’s highlighting Ricky Gervais absolutely blistering Hollywood last night, but here’s him at the very end of the show, getting one last jab in on covering for Harvey Weinstein. pic.twitter.com/z44cHfppXv

Hollywood was not happy, which make headlines like this from Salon, and other “woke” outlets, all the more delicious.

Further proof that free speech, and comedy, should be defended at all cost.