Vampirella #1 is Dynamite Comics’ Biggest Seller of All Time

Dynamite Entertainment is exceptionally pleased with the success of Vampirella #1! The hard work and enthusiasm of the creative team of Christopher Priest & Ergün Gündüz, Dynamite’s staff, fans and most importantly retailers, led to quite the gift for Vampi’s 50th birthday bash!

Vampirella #1 landed in the top 10 for dollars and #11 in units! Diamond Comics Distributors has released their public rankings for the best-selling comic books and graphic novels for July 2019. In a competitive month with every publisher releasing heavy hitters, relaunched titles and historical milestone issues, this is a real accomplishment! Just above another famous comic book character that hangs out with bats!

This healthy debut for Vampirella makes it the best selling full priced Dynamite comic book of all time! Which works perfectly with 2019 also as Dynamite’s 15th anniversary of publishing. While keeping in mind that many copies of Vampirella #1 were not directly distributed through Diamond, accounting for some retailer and creator exclusives yet to be revealed. All accounting for the whopping 130,000+ print run! 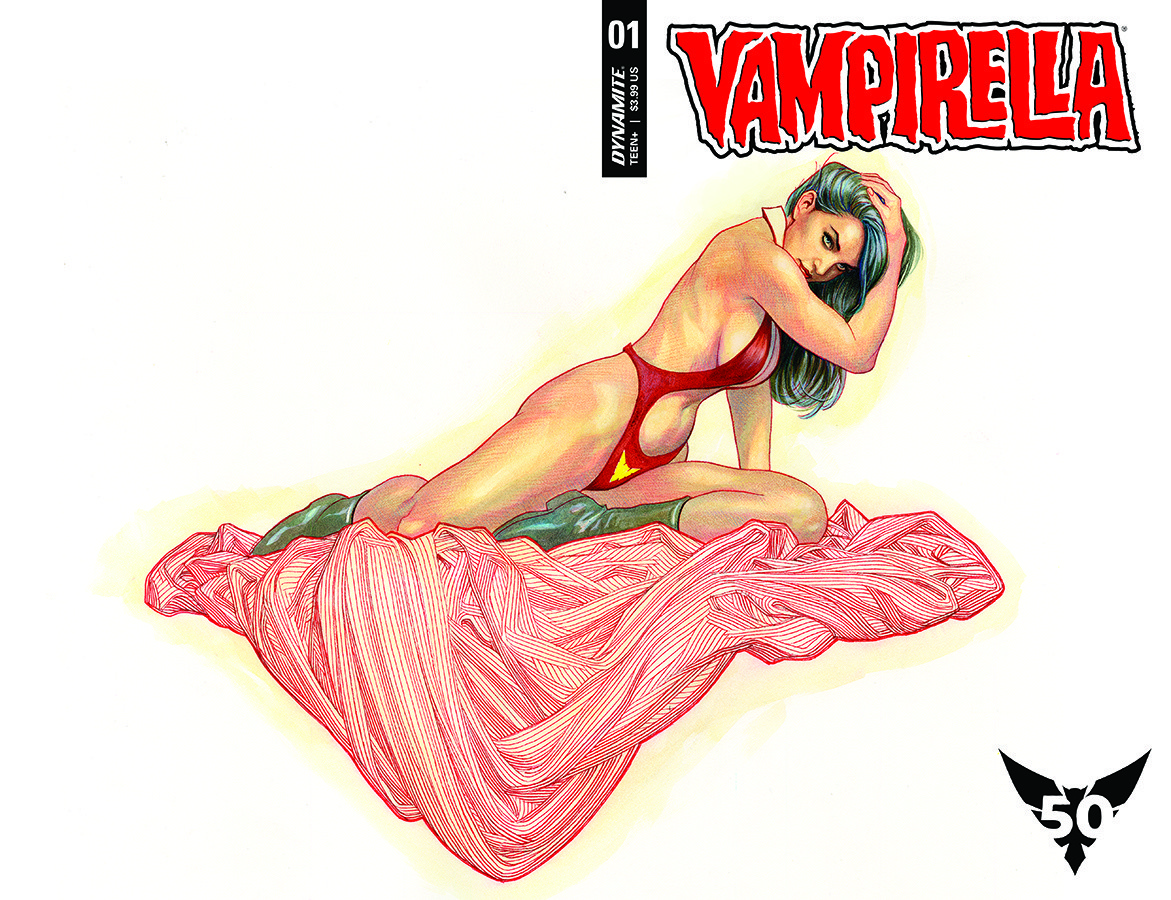 Dynamite has been blown away by the reactions from fans, critics and retailers surrounding the launch. Many fans reported that their Local Comic Shops quickly sold out of the issue or other 50th anniversary Vampirella items such as the replica edition of her first appearance. Stores across the country and even overseas were sharing photos of their life-size Vampi standees stuffed to the brim with comics and graphic novels in anticipation of New Comic Book Day. Many fans were able to chat with Priest at San Diego Comic Con and then signings at historic comic book stores Midtown Comics in New York, Fat Jack’s Comicrypt in Philadelphia and Dr. No’s Comics & Games in Marietta, Georgia.

While the debut was lauded by critics, with an 8/10 average review score.

♦ Adventures in Poor Taste labeled it an “Unexpectedly dark and trippy ride that’s worth checking out for fans and newcomers alike.”
♦ SciFi Pulse chimed in with “This is everything I could have hoped for… Highest possible recommendation.”
♦ ComicsBeat adds, “The book comes together seamlessly, making it a strong start for a new ongoing series starring a character that has seen decades of stories.”
♦ Horror DNA said, “Gündüz is such a brilliant artist, carefully crafting each scene to deliver the most intensity and emotion.”

Editor Matt Idelson shared, “It’s incredibly gratifying to see how well the creative team has meshed and how, in response, the audience has reacted. They deserve all the eyes in the world seeing their work, and I couldn’t be happier for them. We all felt the pressure to deliver something special for Vampi’s big deal anniversary, and I think the job got done pretty well!”

“Seeing the numbers come in was a very satisfying experience and we couldn’t be happier. Ultimately though, it is all about the creative content and those who worked hard to make it as best it can be and then make sure fans knew about it,” said Nick Barrucci, Dynamite CEO and Publisher. “Top to bottom this was a team effort by Christopher Priest, Ergün Gündüz, the entire Dynamite family and the retailers and fans who supported us so well! The most important part is delivering a memorable and engaging Vampirella story that fans and retailers will be excited to read every month and add to their collections. The goal now is to make sure issues two and up are just as exciting!”

Dynamite plans to continue the momentum for Vampirella’s 50th anniversary and moving into 2020. Priest and Gündüz will continue crafting a riveting story for a full year and possibly longer. While Dynamite works with the hottest artists in the industry today to grace the book’s covers with the most captivating art. The second issue out next week features the talents of the peerless Artgerm, who will also be contributing to the fourth issue and possibly more… While J. Scott Campbell, Terry Dodson and others are planned for the next several issues. And even more surprises… Starting with #2, fan artists will also be spotlighted in every issue as Dynamite works to expand and engage the ballooning Vampi fanbase!

Congratulations to Dynamite Comics and the Vampirella creative team!