Teyonah Parris’ Monica Rambeau has been one of the breakout characters from WandaVision and I don’t mean the way Wanda threw her out of The Hex. While the show kept her identity a secret for the first three episodes, most people know who she was playing based on the actresses introduction to fans back at the San Diego Comic Con back in 2019 when Kevin Feige told us she was playing Rambeau. And while comic readers have been eagerly awaiting big things for the characters, her heroic side is just starting to be seen in the most recent episode. 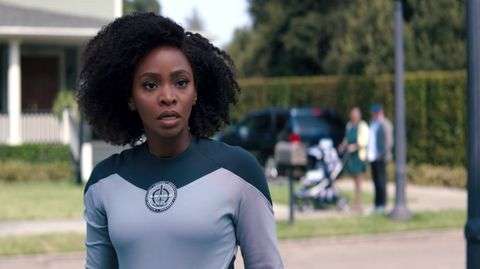 While the actress has been keeping the future of the character quiet, we do know she will be continuing in the role in the upcoming Captain Marvel 2 where Parris is reuniting with Candyman director Nia DaCosta. She will also get to work with two Marvels as she and Brie Larsen will be joined by Iman Vellani who will be playing Kamala Khan aka Ms. Marvel.

And while she wouldn’t say exactly why it seems that Monica has an issue with Carol Danvers now, Parris would hit about the end of WandaVision with The Hollywood Repoter, describing the conclusion of the series as: “Epic and incredibly sad. I mean the whole show is incredibly sad to me, but I’m putting those words together.” And while it is still an MCU show with lots of effects and Easter Eggs, at the heart of the story you have characters who are dealing with tragedy and grief.