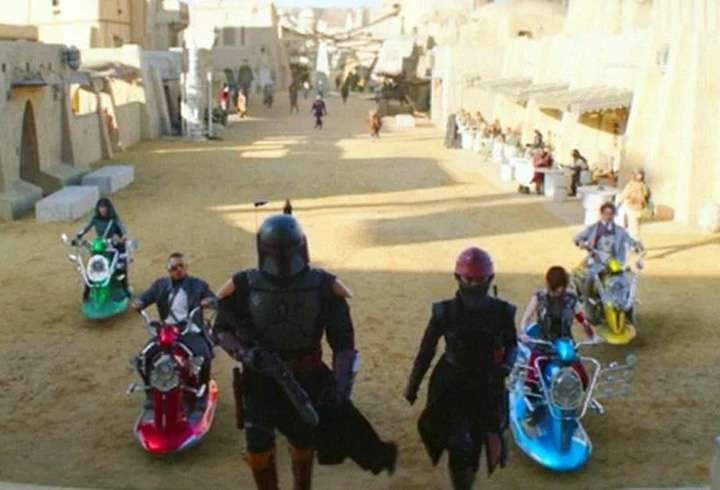 You may have seen on-line some people mocking the introduction of a group of spider-bike riding mod kids to the Book of Boba Fett. We certainly did, and got a kick out of it.

The gang, a group of late-teens who modify themselves with droid parts, are introduced as a problem Boba (Temuera Morrison) is asked to look into by a water monger named Lothar Peel (Stephen Root), but Boba learns that Peel if overcharging for water and the gang can’t find work to pay for the water, so Boba pays off Peel at less than half of what he claims was stolen and told to like it or move to Mos Eisely. He then hired the gang lead by Yellowjacket’s actor Sophie Thatcher and The 100 actor Jordan Bolger.

While they turn out to be handy in a fight and a chase through the streets of Mos Espa, the thing people are having a problem with are the mod-style speeders they ride. They look very out of place on the desert planet of Tatooine. And while some defend the look based on scenes from the prequels on Coruscant, Fennec Shand actress Ming-Na Wen said at the Winter TCA: “For me, if you know George Lucas, this is a real homage to a lot of things he’s always loved, whether it was the Mods back in the 1960s, a movie about kids on motorbikes and scooters, and American Graffiti. Those are great little tributes but at the same time it lends itself to the storytelling of learning about Tatooine and the citizens of Tatooine.”

The speeder bike chase in The Book of Boba Fett Chapter 3: pic.twitter.com/Df2LjZPey7

I’m really enjoying Book of Boba Fett, but that “speeder chase” from chapter 3 was a low moment in Star Wars #BobaFett #StarWars pic.twitter.com/IUMh3hD6yn

I didn’t expect Power Ranger Cyber Force™️ speeder chases through Mos Espa when I started watching Book of Boba Fett but I am all for it.

Mad respect to Book of Boba Fett for having podracing/Tatooine speeder graphics that look like N64 graphics. Why improve on 20-year-old tech when you can choose to get worse?

I can’t believe that Star Wars has devolved to Boba Fett hiring a goth teenage gang with rainbow colored speeder bikes. How is this Star Wars, this is so embarrassing.

Book of Boba Fett episode 3 gets a 4/10. That speeder chase was absolutely terrible. No sense of speed, no wind or motion and terrible CGI. It looked incredibly cheap and unironically worse than the speeder chase in Return of the Jedi.

Showrunner Robert Rodriguez had previously expressed that there might be some controversial non-Star Wars elements that might irritate some fans. However, he also stated that there will be plenty of surprises in store. “Things turn up you don’t expect, you see things we couldn’t believe we got to do. Every episode has big surprises.”

Elsewhere during the panel, Wen also answered questions about what it was like to play such an intense physical role at the age of 58.

“I like representing older, strong females,” she said. “I do have a certain set of skills, whether it’s martial arts or kickboxing or learning stunt fighting. But it used to be that when a woman reached 40, they’d get put out to pasture. I’m far beyond that now, and it’s great that I can still continue to do this. I feel very privileged and honored, and I’m living out my dream of being in a ‘Star Wars’ project. I’m going to kick butt for as long as I can.”

“The Book of Boba Fett” is available to stream on Disney+. New episodes are available every Wednesday.