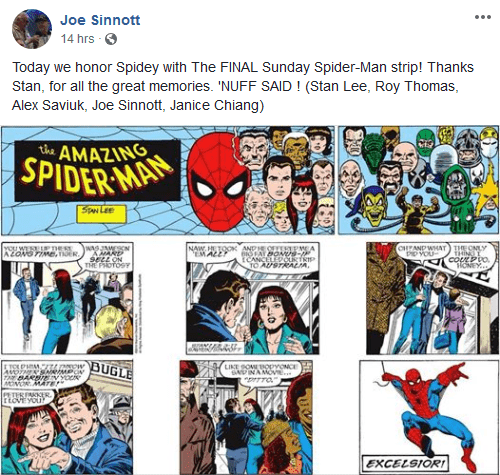 I hadn’t much paid attention to what King Features Syndicate does with the Spidey newspaper strip in a long time, but just recently, I discovered a recent announcement by Alex Saviuk (via The Daily Cartoonist) from a few weeks ago that the strip is being cancelled:

Now that KFS has posted their statement yes, the Spider-Man strip as we know it has come to an end. And as much as Roy Thomas and I were hoping that the strip would go on to continue Stan Lee’s legacy just as King Features did with The Phantom after Lee Falk died 20 years ago, that’s not the case here. March 23 will be the last Daily and March 17 will be the last Sunday as we close out the current storyline. It’s news to me that in the statement it mentioned a new strip starting up possibly months down the road after they reprint some classic Lee-Romita stories from 40 years ago or 30 years ago whichever they choose!

A strip further exploring the Marvel universe as they say which doesn’t mean it would or wouldn’t be Spider-Man and if they were going to feature new creators or if they would call on Roy and me again to create stories in any universe they desire us to go. Time will tell but in the meantime it was glorious fun while it lasted and I learned a huge lesson about not counting any chickens before they hatch. It was difficult inking and sending in my last week of Dailies a few weekends ago (the Sundays were always done 3 months ahead of time so I hadn’t drawn one of those in months ). It was like saying goodbye to my old friend all over again.

So after about 42 years, Spidey’s newspaper adventures are gone for good. But, this certainly does confirm what I’d once guessed – the late Stan Lee wasn’t the actual writer for most of the strip, though I’m sure he had creative input decades before. Rather, it was ghostwriters, including Thomas. And on that note, Thomas was interviewed by SyFy Wire, and the item includes this fascinating tidbit:

One thing fans liked about the strip is something Thomas prided himself on: its continuity with the origin story of the comic books, and the continuation of Peter Parker’s life cycle. Though Spider-Man: Into the Spider-Verse has irrevocably proven how much fun there is in the multiple Spider-Man timelines, the comic strip was a nice place to visit for old-school elements, like, for instance, the Peter Parker/ MJ romance. So while Peter Parker may be currently sort of dead in the MCU, he’s still alive and well and living in an apartment in Manhattan with MJ in the strip, at least he will be until this Friday.

Yep, I have no doubt that was a welcome element for many fans driven away by Joe Quesada’s loathsome One More Day atrocity. The fact Mary Jane was still allowed to be the lady Lee created her to be – married to Peter Parker – was certainly a plus. Even so, what Quesada did is something Spidey’s never recovered from in the long run.

When Thomas got news of the strip’s upcoming demise, he had been plotting out a trip to Australia for Parker and MJ, where they were to encounter the villain Kangaroo and have various exploits and adventures. “Marvel decided to kill the strip,”says Thomas, “and not print the final couple of weeks. And [artist] Alex Saviuk graciously reworked the final strip to show the two of us in it, and to add a ‘Nuff Said!’ headline on the Daily Bugle.” 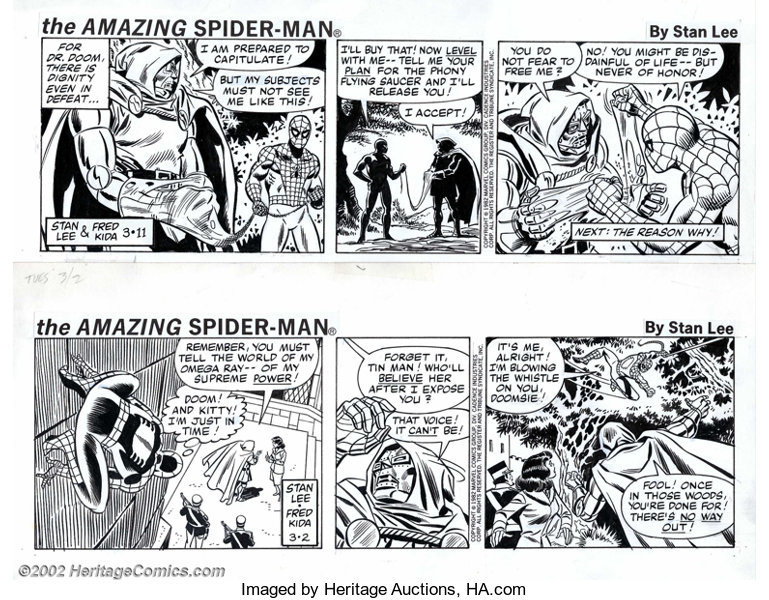 Was that Quesada, C.B. Cebulski, or Dan Buckley who made the decision? I don’t know, it all depends on who’s in charge, but if they were behind it, they decidedly did wrong. That’s not saying I believe the strip had to continue at all costs – I do think it wore out its welcome long ago. But when such pretentious men are in charge, I can’t help feel they had it canned for un-altruistic reasons. Even though Mary Jane’s since been restored to Spidey’s comics.

Artistically speaking though, I do think the newspaper strip lost its way somewhere by the mid-2000s, recalling a story from nearly a decade ago where Sabretooth turned up looking for Wolverine (who made an appearance several weeks prior to that one), and Victor Creed’s idea of how to find Logan was to terrorize Spidey, which made no sense. Sabretooth even went so far as to track Peter and MJ on an assignment to Florida, and at one point, threatened to cut MJ to ribbons if that’s what it took to find out where Wolverine was. Logan arrived just in time, they had a duke-out, and, IIRC, both conked out and later left off-screen.

What irritated me about that storyline in hindsight was that here, Sabretooth put MJ’s life in danger, and Spidey doesn’t actually try to ram him for endangering his girl Friday? It just reeked of plain bad writing, is all. A better idea would’ve been to have Spidey finally throw off the kid gloves and smash Creed with all his might, telling Wolverine that this is his fight now and insist he wait in line. It almost made the time Peter assaulted Ben Reilly and accidentally struck MJ during the Clone Saga look tame by comparison. I don’t know if Thomas was behind that particular story, but I do know it insulted my intellect so badly, I was discouraged from reading it again for a long time.

So, I’m not really that sad to see the newspaper strip put to rest after 4-plus decades. I guess I’m just sorry if it lost direction, which would dampen any positive impact during its close, and also sorry if Marvel’s upper echelons had it canceled for biased reasons.