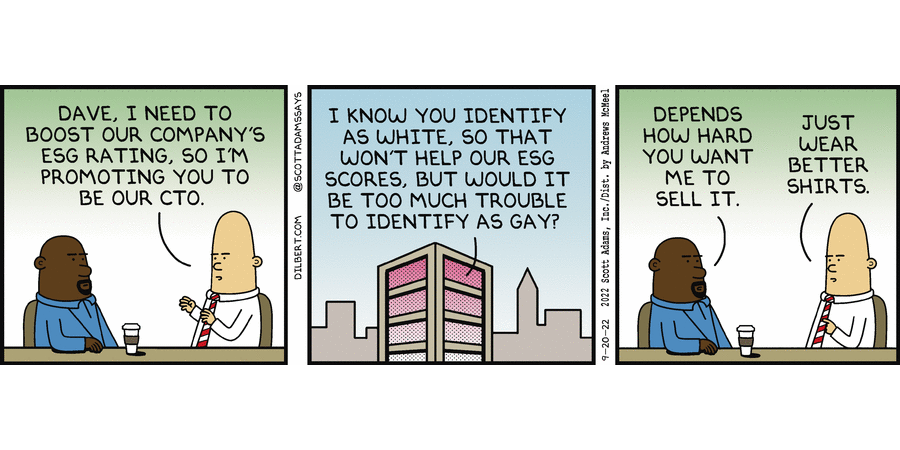 Since 1989, Scott Adams has written the comic strip “Dilbert,” but according to a story from yesterday, newspaper owner Lee Enterprises has stopped publishing the strip in a number of their newspapers. Nearly 100 newspapers across the country are owned by the media firm.

The “Dilbert” comic strip, which takes its name from the figure who attempts to climb the corporate ladder, frequently makes fun of office culture with satirical comedy and social commentary, Adams told Fox News. This is probably why it was abruptly discontinued in nearly 80 regions, Adams told FOX News.

“It was part of a larger overhaul, I believe, of comics, but why they decided what was in and what was out, that’s not known to anybody except them, I guess,” he said.

Critics of Scott Adams claim that Lee Enterprises presents as a right leaning corporation and that other comic strips were similarly cancelled. They contend the decision was more of a budgetary decision, rather than cultural.

That’s exactly what’s happening. It has nothing to do with Liberals like this comment section seems to think.

I lost my TV show for being white when UPN decided it would focus on an African-American audience. That was the third job I lost for being white. The other two in corporate America. (They told me directly.)

Adams rose to fame in the 1990s as the creator of the satirical commentary-filled weekly comic strip Dilbert, which became a hit with readers. The now-defunct UPN eventually produced an animated adaptation of the comic strip that ran from 1998 to 2000, which gave rise to other forms of media, including merchandise, a video game, and numerous compilation volumes. Two years ago, the “Dilbert” creator came under fire for claiming that his UPN animated show was canceled in 2000 because of his race.

In addition to his popular comic strip, Scott Adams also produces a daily podcast, and uses his training as a hypnotist and a lifelong student of persuasion to analyze current events through a persuasion lens. As a “master persuader,” perhaps he can persuade Lee Enterprises to reverse their decision. No matter how you feel about Scott Adams, or Dilbert, it’s a little startling to see the responses on social media which range from celebratory to ghoulish. That’s Twitter for you.