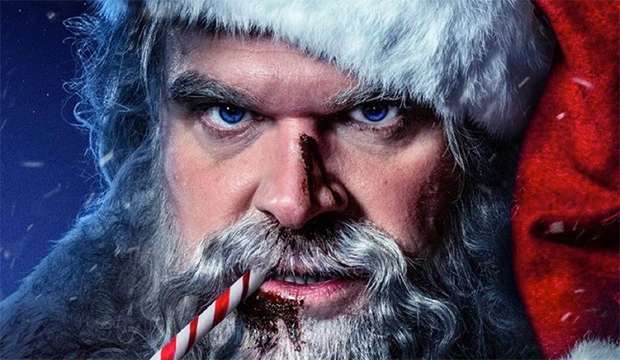 Though insiders consider the first weekend in December to be a “dull weekend” at the box office, one film did a lot better than expected. While the number one movie was still Black Panther: Wakanda Forever, which took in a $17.59 million haul, almost $1.5 million above what was expected in the film’s fourth weekend, the real overperformer came in at number two. The new David Harbour, R-rated holiday horror film Violent Night, grabbed $13.3 million after having been projected to do between $10-$12 million.

The only film that was comparable to this was 2015’s Krampus which made $16.2 million its opening weekend, but that was a PG-13 film, which opened it up to a much larger audience. Overall, the current slate of released movies only brought in only $56.4 million for the weekend, making it the eighth lowest weekend of the entire year.

While it appears Wakanda Forever will eventually get around $400 million this month domestically, that’s nearly 40% less than what Black Panther (2018) earned. Expectations were never as high for Wakanda Forever, but it’s interesting to note that the sequel is also underperforming worldwide. The theatrical run is winding down, but its worldwide total is in the just $735 million range. For comparison, Black Panther raked in nearly $1.6 billion back in 2018 (when adjusted for inflation). That’s around half.

John Nolte at Breitbart sums up why Disney is struggling at a box office that basically cleared the deck and held back any big releases for Black Panther 2, which was expected to be a juggernaut when release schedules were first decided upon.

[…] this has to be a disappointment for Disney. The shocking loss of Black Panther star Chadwick Boseman to cancer didn’t help. What also didn’t help was the marketing. What had been a masculine franchise with Boseman and Michael B. Jordan was sold (at least by the trailer) as something feminized. The excitement just wasn’t the same, the reviews were less enthusiastic, and here you have the results.

Disney’s Strange World continues to disappoint with only $4.9 million in its second weekend, a record breaking loss for Disney. The Menu took the fourth slot with $3.55 million and Devotion rounded out the top five with $2.8 million. Perhaps Netflix should have expanded their showings of Glass Onion instead of removing the film from theaters all together. The film will see streaming release it later this month, but the film did incredibly well in only a handful of theaters and would’ve likely continued to do so.

This is another fumble for the groomers who run Walt Disney. Already, these sickos have destroyed Star Wars, the Muppets, and Pixar as film franchises. All they have left is Marvel, and while Marvel films are still raking in the cash, it’s not as much as in the past. The excitement is also gone. What had been a “special” franchise, now feels like any other superhero movie.

Disney is woke-poisoning all its golden geese. Black Panther was a cultural phenomenon. Now it’s a fading franchise. Is anyone begging for a part three?

Disney is getting what they deserve.