Education is no laughing matter. Recently, Rotten Tomatoes was forced to change features to its site to prevent harmful and unintended application of its scores provoked by pundits from mainstream entertainment marketing sites reporting false news due to an alarming lack of reading comprehension skills.

This is addressed in the new Rotten Tomatoes Staff Blog which seems to have been created exclusively to address the aforementioned problem and it is one of the new features the site has implemented.

As of February 25, we will no longer show the ‘Want to See’ percentage score for a movie during its pre-release period. Why you might ask?  We’ve found that the ‘Want to See’ percentage score is often times confused with the ‘Audience Score’ percentage number. (The ‘Audience Score’ percentage, for those who haven’t been following, is the percentage of all users who have rated the movie or TV show positively — that is, given it a star rating of 3.5 or higher – and is only shown once the movie or TV show is released.) —Rotten Tomatoes Product Blog

Here at Bleeding Fool, we believe in the principle of charity in argumentation, which leads us to conclude there is a serious education problem amongst the pundits who write articles in these sites since we refuse to believe they crafted a fallacious, coordinated narrative designed to fool the public and create discontent by dividing the audience just to propagate clickbait articles and identity cult ideologies.

As explained in the quote from the RT blog, another one of the modifications the site suffered was the disabling of the ‘not interested’ button which users to show they didn’t intend to go watch a movie for diverse reasons. 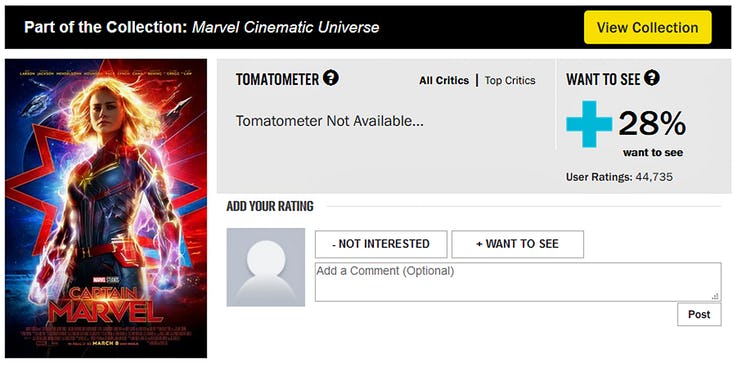 And here’s how the messages who used the feature looked like until last Monday:

The ‘not interested’ feature was simple. It wasn’t synonymous with the ‘user review score’ and it didn’t allow for any user reviews until the film was released to the public. Since this function was very simple and easy to understand, only one conclusion can be derived from the irrational headlines most mainstream entertainment marketing sites had: Their blog-writing staff suffers from serious literacy difficulties or disabilities on a preoccupying scale. This is easily verified and explained by this text from the University of Portland. It is an education crisis which usually afflicts children’s classrooms, but the problem seems to have infected mainstream sites as well.

Here’s a few examples of some illiterate bloggers who couldn’t comprehend the easy-to-understand ‘not interested’ feature the Rotten Tomatoes aggregator used to have until a couple of days ago:

We really hope the post from Rotten Tomatoes can help the general public and the authorities understand the magnitude of the illiteracy problem these sites are facing. It looks like it affects people of any one of the millions of different real genders, especially people who identify as identity politics cultists who also seem to be propense to emotional incontinence.

We hope the learning disabilities our colleagues face today is something that can be solved with an effort from authorities and their caregivers. It would be sad to see their life condition deteriorate if massive media layoffs happened, like last January, and these differently-abled individuals find themselves not capable to learn to code to find new jobs.

Andrew Torba and Gab.AI, a tech team which knows how to code, have made available their new browser add-on Dissenter, which allows the audience not burdened with reading problems to comment on www.rottentomatoes.com or any other site without the need of native comment sections. This, of course, to avoid any episodes of pundit entertainment critics who might be on the spectrum or reading-disabled.

Solving this crisis is a team effort from people who care. 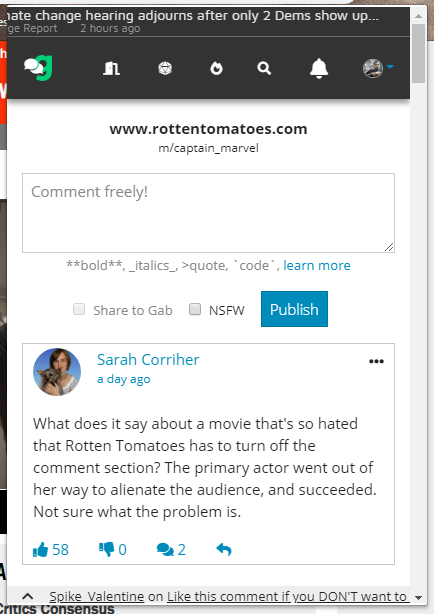