Nicki Minaj’s #Ballgate Incident Waking Up a Lot of People Rapper Nicki Minaj has created what’s been hashtagged as #Ballgate after being criticized for claiming that her cousin refused to get the vaccine because a friend became impotent and suffered swollen testicles after getting vaccinated. She said in a second tweet that she was going to do her homework before making a decision on whether to be vaccinated or not.

I have an infant with no nannies during COVID. who mad? Not risking his health to be seen. One yaself. https://t.co/z1uo2OHO1b

My cousin in Trinidad won’t get the vaccine cuz his friend got it & became impotent. His testicles became swollen. His friend was weeks away from getting married, now the girl called off the wedding. So just pray on it & make sure you’re comfortable with ur decision, not bullied

As the night wore on, Minaj struck back at her critics, accusing them of misrepresenting her tweets. She was particularly angered by MSNBC host and one-time homophobe Joy-Ann Reid, who accused Minaj of spreading anti-vaccine misinformation.

The two white men sittin there nodding their heads cuz this uncle tomiana doing the work chile. How sad. https://t.co/4UviONyTHy

On Wednesday the rapper posted the Tucker Carlson video where the Fox host said that she was being criticized by health officials for telling people to make up their own minds.

Right. I can’t speak to, agree with, even look at someone from a particular political party. Ppl aren’t human any more. If you’re black & a Democrat tells u to shove marbles up ur ass, you simply have to. If another party tells u to look out for that bus, stand there & get hit https://t.co/OhjQZCbmBa

CNN, Entertainment Tonight, and even The View’s Meghan McCain tried to scold her.

Nicki Minaj CLAPS BACK at Meghan McCain Over Vaccine Comments

Minaj then claimed on her Instagram that she had been suspended by Twitter. “They didn’t like what I was saying over there,” she wrote, adding that “Asking questions is OK” and “i like being fking dumb.” In this case, she was “asking questions” about the efficacy of vaccination, attracting criticism for spreading anti-vax misinformation. 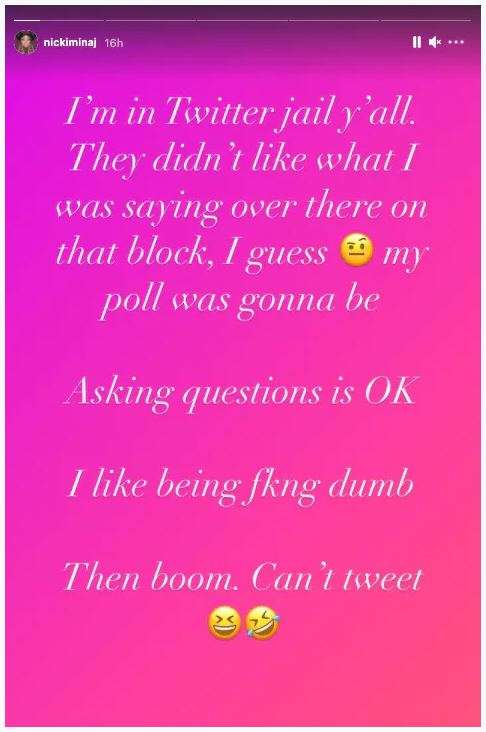 Since Minaj has over 158 Million followers on Instagram and nearly 23 Million followers on Twitter, it should be no surprise that self-proclaimed medical experts came forward in droves to debunk the idea that COVID-19 vaccines cause impotence. Twitter denies that they suspended her, but apparently the White House was so concerned they offered to help her change her mind about vaccines.

The White House has invited me & I think it’s a step in the right direction. Yes, I’m going. I’ll be dressed in all pink like Legally Blonde so they know I mean business. I’ll ask questions on behalf of the ppl who have been made fun of for simply being human. #BallGate day 3 https://t.co/PSa3WcEjH3

CNN took it to a whole other level. Does anyone know how Don Lemon is still on the air after this?

Nicki Minaj is talking about Don Lemon from last night talking about his comments that some would rather take “ass shots” referencing Nicki Minaj. pic.twitter.com/bJMhzKDEq5

Nicki had her own hot-take on Lemon’s tirade against her. 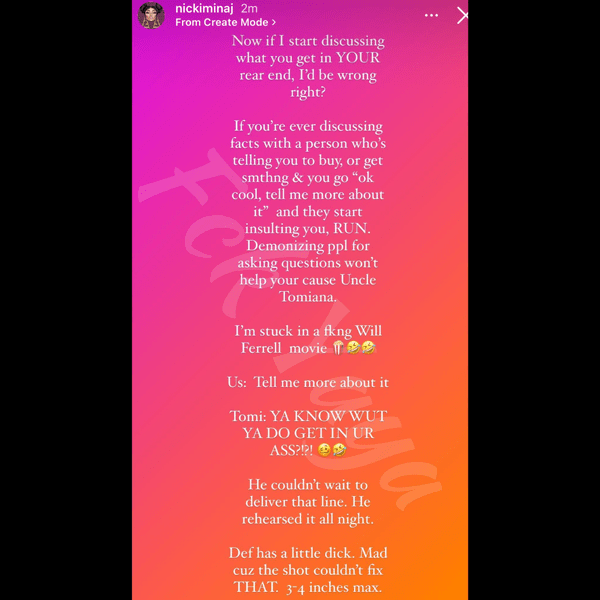 Whatever happens next, it should be clear to any reasonable person that Minaj didn’t tweet misinformation or disinformation. She tweeted her opinion.

The “facts” she was basing her opinion may not have been facts, but they were hearsay, and anyone who can’t recognize a rumor or an unsubstantiated claim isn’t going to be saved by social media censorship. Twitter is suspected of banning her because a lot of people pay attention to her opinions, which means, as Nicki observes somewhere in her recent Instagram video, that people nobody pays attention to are free to offer whatever ideas they choose to the world, but celebrities like her get censored when the opinions vary from what those with power want the public to hear.

Anyone else get the feeling someone found out time travel and is in the process of trying to save the world from some calamity by fucking with the past?

Perhaps the message people need to take from the #Ballgate episode, and Nicki Minaj’s recent awakening is that everyone needs to “wake up” and realize what’s happening. Whether her opinions or information is right or wrong, she has become an unlikely folk hero of those who are questioning the vaccine mandates as well as the science to back them up. Even the FDA is suddenly rejecting the government’s narrative. And although Minaj apparently didn’t wake up until the Left and its minions (like Twitter) decided to attack and silence her, it’s never too late to be red-pilled I guess.