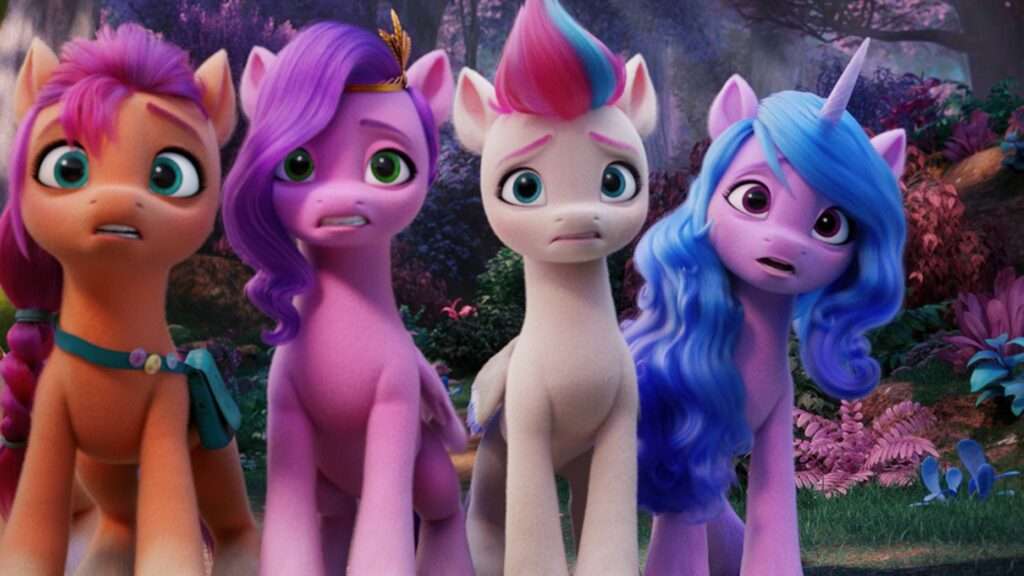 “My Little Pony: The Next Generation” is now available on Netflix, and the 90-minute animated film introduces some brand new fanciful animals, and a few that are terrifying, who embark on a mission to restore magic to the pony land of Equestria.

The film, which stars Jane Krakowski, Vanessa Hudgens, Sofia Carson, Elizabeth Perkins, James Marsden, Ken Jeong, and others, shines a light on a country that is divided and in need of a political awakening. All the while, it maintains the upbeat tone and bright visuals that “My Little Pony” is known for.

While the original “My Little Pony” was a kid-friendly animated property that debuted back in the ’80s, Netflix’s iteration has definitely gone “woke”.

According to a review in the New York Times, the movie, directed by Robert Cullen and José L. Ucha, contains what they describe as “very unsubtle references” to America’s present political climate, likely only to be picked up on by any parents who are wisely watching television with their children. And according to writer Batrice Loayza, the anti-magic ponies are really “anti-science.” Jeong’s Sprout, on the other hand, is a “crimson demagogue with a bleach-blonde mane” who “ascends to power.”

The NYT review goes on to say the movie ‘stages a political awakening about tolerance, prejudice, even fascism — sweetened, of course, with musical numbers, cutesy gags, and pastel vistas’.

According to FOX News:

In an apparent effort to send a message to kids about empowerment, unity and reform, Hudgens plays the heroine of the film, an earth pony named Sunny, who teams up with a curious unicorn named Izzy (Kimiko Glenn) to attempt to make peace with outsiders from other communities. Along the way, they meet some pals and band together as a pack of young progressives wanting to make change.

“I think that it really reflects the times,” Hudgens said of the movie’s impact in an interview with ABC 6. “My character believes in inclusion and friendship.”

“It’s such a sweet little message to be reminded of,” Glenn added to the outlet. “Until you’ve experienced someone, you can’t know how they actually live. We flourish when we come together. It’s an important message.”

Those progressive ponies even get involved in environmental activism, and protesting weapons manufacturers. Apparently only progressive politics are the important message. The review continues, and it doesn’t all sound terrible:

“Their mission is full of misadventures, but these new best friends each possess their own unique and special gifts that may be just what this ponyverse needs to restore magic and prove that even little ponies can make a big difference,” Netflix’s description of the movie continues.

Meanwhile, Marsden pointed out that his character, Hitch, is “the first male pony of the core characters of the ponyverse.”

“He’s the sheriff, so he likes to keep order and everything kind of in control and keep everybody safe. By the end of the movie, they’re embracing each other through the bonds of friendship and embracing their own individuality. Those are things that young kids need to need to see more of,” the actor said.

The film frequently depicts anti-magic ponies – the ‘the baddies’ or ignorant anti-science creatures likely to spread irrational fear and untruths. In its description, Netflix describes the tale with slightly less on-the-nose language, describing a ponyverse that’s in disarray as Equestria has “lost its magic,” thus leaving the different species “living in fear and mistrust against each other.” “My Little Pony: The Next Generation” is now streaming on Netflix.