Of course, we confirmed this news already four months ago, but since it’s back in the news, why not?

When you speak to an actor in the MCU, they all dance around giving away secrets (except Tom Holland) and mention the men who will “take them out” if they spill the beans. Then there’s Alfred Molina who not only confirmed to Variety that he will be reprising his role of Otto Octavius in the upcoming Spider-Man: No Way Home, but he even talked about the filming.

“When we were shooting it, we were all under orders not to talk about it, because it was supposed to be some great big secret. But, you know, it’s all over the internet. I actually described myself as the worst kept secret in Hollywood!”

What was it like to go back to a character from 2004? “It was wonderful. It was very interesting going back after 17 years to play the same role, given that in the intervening years, I now have two chins, a wattle, crow’s feet and a slightly a slightly dodgy lower back.” 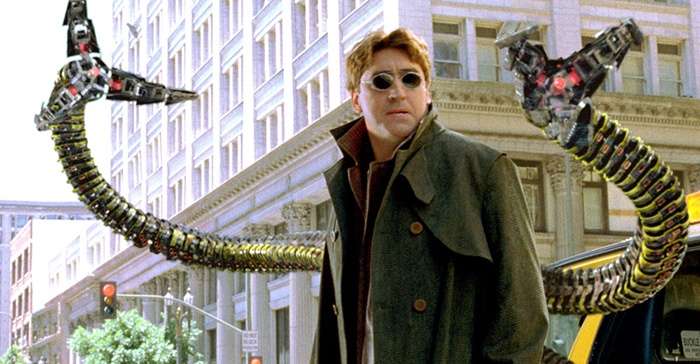 In Spider-Man 2, the film ended with Doc Ock sacrificing himself to stop his reactor from exploding. According to Molina, director Jon Watts told him, “In this universe, no one really dies.” And explained Otto’s story would pick up from that moment in the East River.

While impressed by the de-aging process Marvel has done in the past, the 67-year old actor was concerned with how he would look in fight scenes, pointing out that he didn’t have the physicality of his 17-year younger self. Then he remembered that most of his fighting was having a mean look on his face while the puppeteers made his metal arms do all the hard work. “It was fantastic.”

The casting of Molina from the Sam Raimi / Tobey Maguire films combined with Jamie Foxx returning as Electro from the Marc Webb / Andrew Garfield era ties together two decades of Sony’s Spider-Man films.

The latest installment, Spider-Man: No Way Home, is set to be in theaters December 17th, 2021.